By Gavin Conway
Share Article
Peugeot makes a TT rival and gets it right
Pros
Looks like a concept car, drives like a sports car
Secure handling on all roads
Petrol engines sound good
Cons
Cabin shows traces of humble roots
Rear seats are tiny - much like a TT's
No four-wheel drive or rear-wheel drive
Cars > Peugeot > RCZ 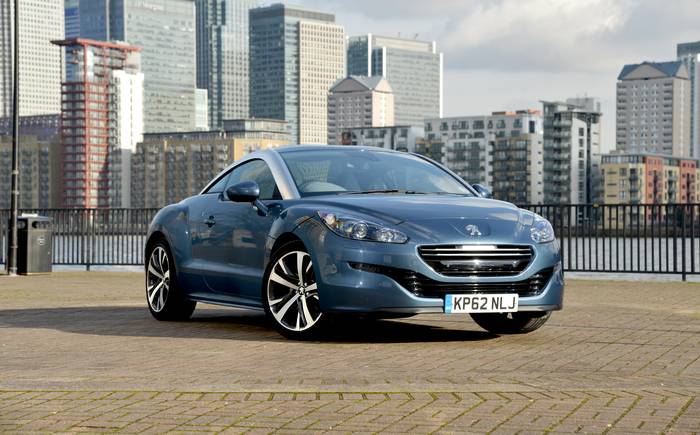 What is the Peugeot RCZ?

Peugeot’s take on the Audi TT sports coupé idea, based (very faithfully) on the 308 RCZ concept car of 2008 and launched in the UK in 2010, received a facelift and a larger range of options for 2013. The updated model has kept the eye-catching double-bubble roof but the nose has been subtly and pleasingly reworked, moving away from Peugeot’s former gaping-mouth look.

The previous generation’s aluminium windscreen pillar/roof hoops remain but are now also available in champagne or matt black, the latter looking particularly good with black wheels and a carbon-fibre roof. In addition, there are new body colours along with new alloy wheel options, the Sport staying on 18in rims and the GT riding on a new 19in wheel.

Under the skin the revised RCZ remains largely unchanged. It is based on the 308 hatchback but with the wheels set more widely apart. Peugeot has simplified trim levels with a two-tier system comprising Sport and GT, although both move the 308-based interior fairly convincingly upmarket. As before, there’s a choice of three engines: a 1.6 turbo with 156bhp (related to BMW’s Mini Cooper unit), a 2-litre turbodiesel with 163bhp and, for the GT model only, a 200bhp version of the 1.6 petrol turbo. A new 270bhp range-topping RCZ-R recently went on sale and it’s seriously good fun to drive.

Search for and buy a used Peugeot RCZ on driving.co.uk

The RCZ’s shape is similar to the Audi TT’s but a touch more characterful. Prices range from £22,095 for the simplest 1.6 Sport to £31,995 for R, thus undercutting comparable TTs. What the RCZ can’t offer is the quattro four-wheel drive of the TT or a convertible body. Other rivals include the new BMW 4-series and Mini coupé.

There are no mechanical changes for 2013 and the RCZ remains a proper driving machine, going some way to restoring Peugeot’s reputation for making great-handling sports cars. The diesel version doesn’t quite live up to the model’s promising looks, feeling a touch soft and ordinary, but the petrol turbo models ‒ with sport suspension, a smaller steering wheel and tauter, keener responses ‒ do the job nicely.

These versions steer crisply with good feedback. The suspension is taut but manages to smooth out bumps without ever feeling loose and you can tickle the cornering line with the accelerator just as you could the old Peugeot 205 GTI, although in a less extreme fashion. The 156bhp RCZ feels vigorous, while the 200bhp version is properly rapid with lots of torque and a smooth power delivery. Both have a pleasing engine note and feel more alive and more interactive than a TT. You’ll have truly great time in a GT 200 and will laugh your head off in the R version.

There aren’t many noticeable updates inside. The 308 dashboard was a good starting point with its low, airy design but the RCZ luxes it up convincingly with expensive-looking dials, a posh clock in place of the centre vent and leather covering the top versions. The updates include a leather/Alcantara combination and GT models are available with a new Cohiba Brown leather trim. GT models come with a sports kit which includes a bespoke steering wheel and gear lever.

The driving position is lower and more sporting than a 308’s and that big back window makes for a light, bright cabin with good visibility all round. There are two rear seats but they’re tiny, useful only for very small children or as a luggage overflow. The only real let-down is some hard plastics for the glovebox lid and door cubby holes but most of the interior is covered in pleasing-to-the-touch soft leather. It’s not up to Audi spec, though.