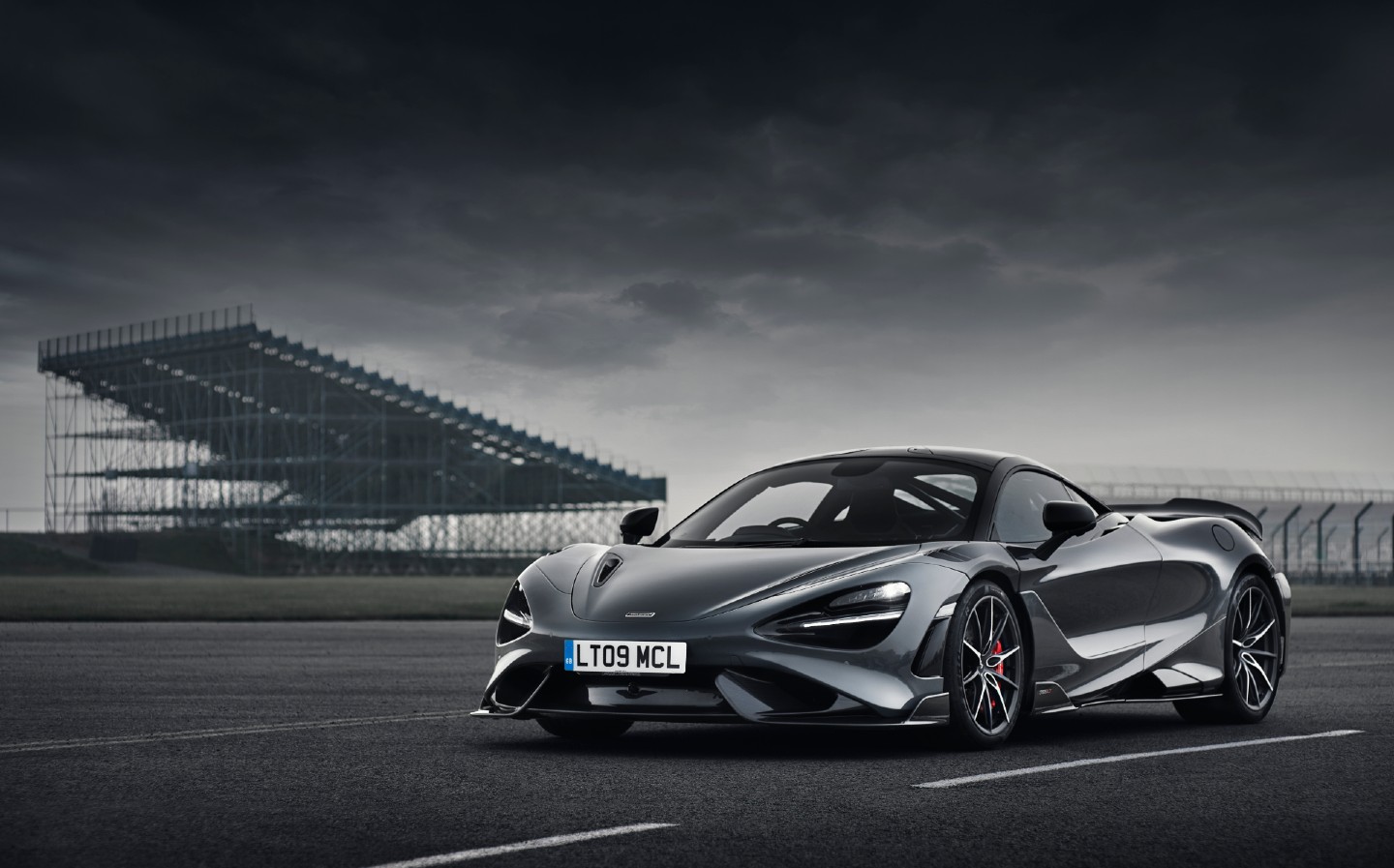 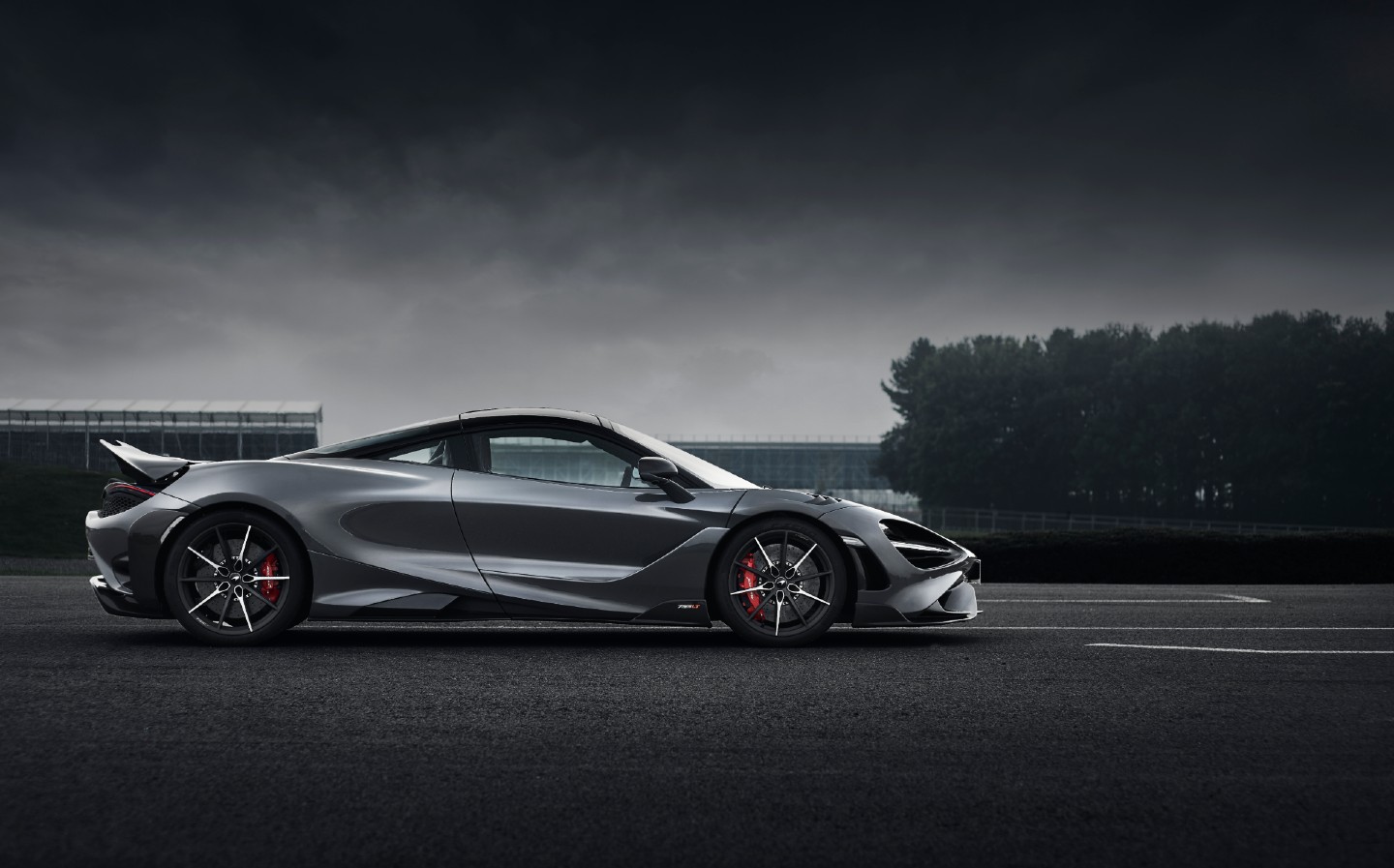 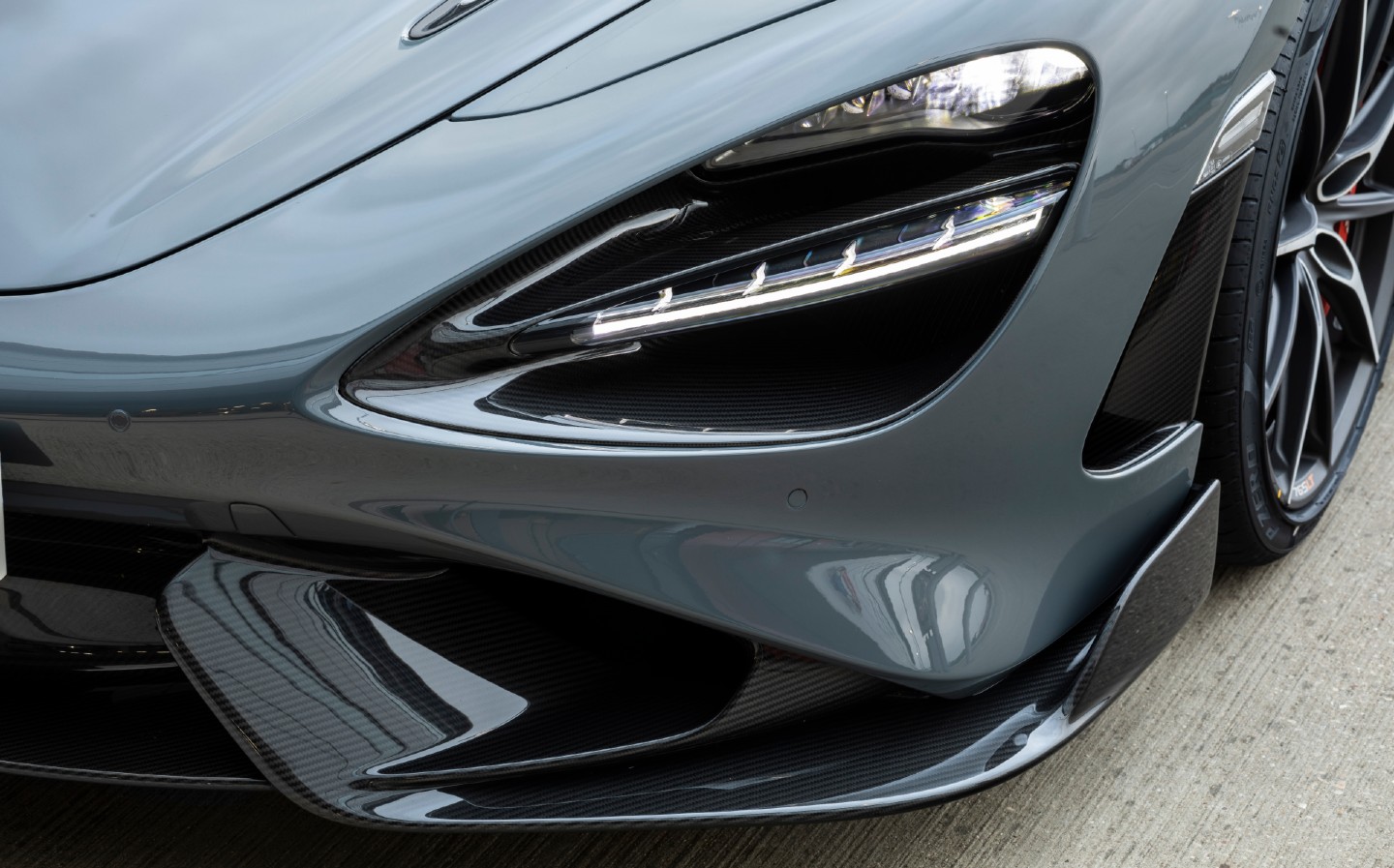 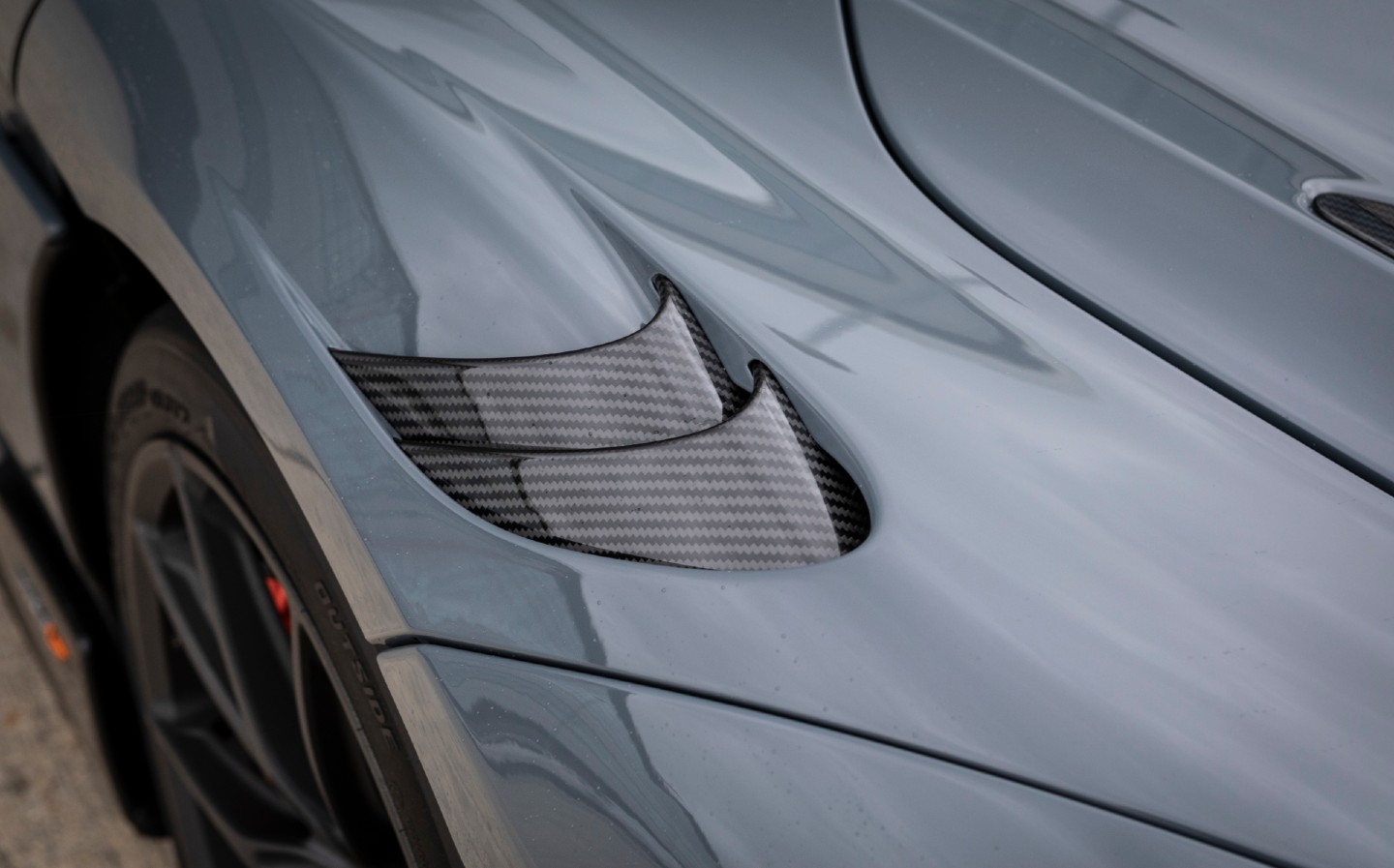 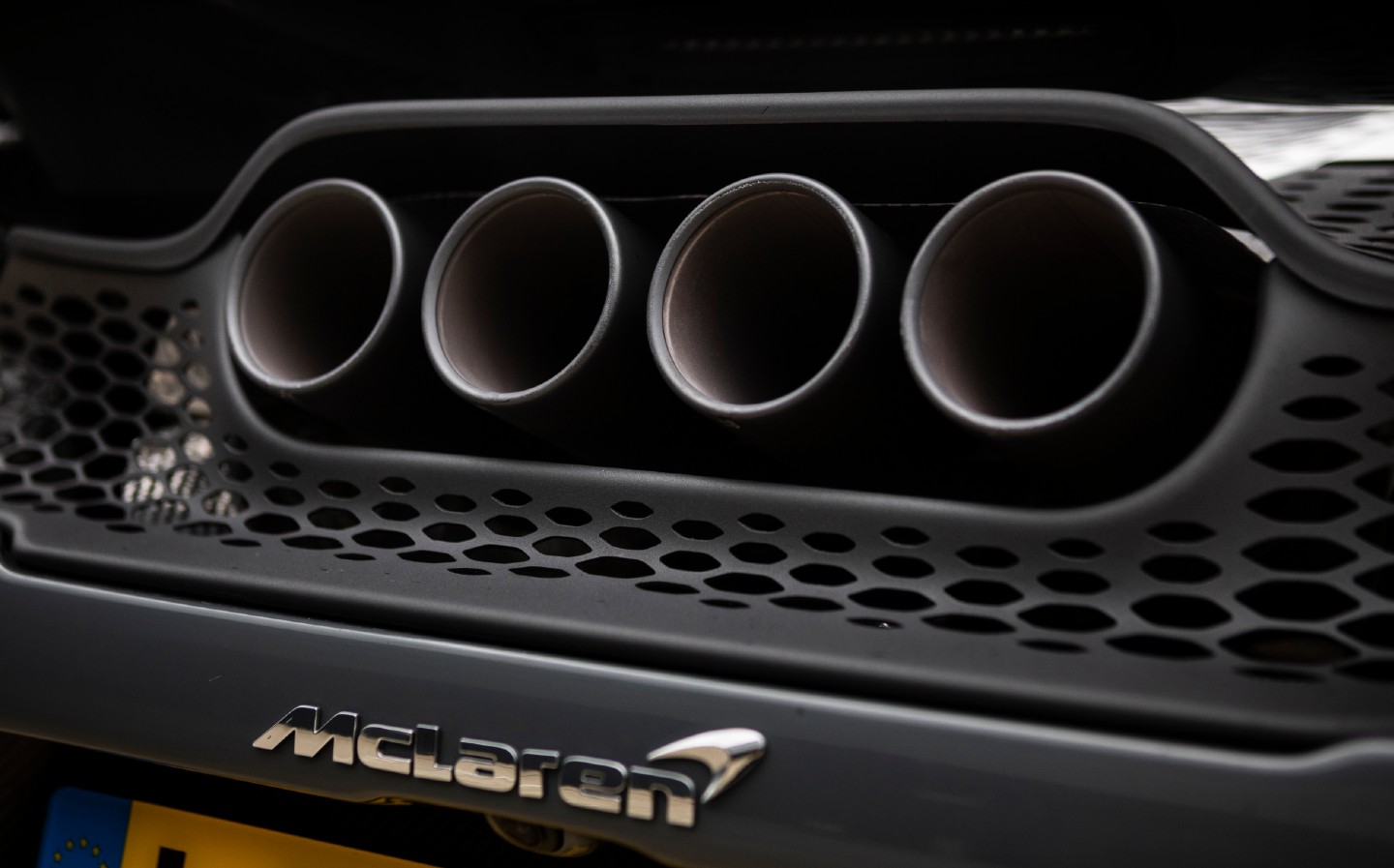 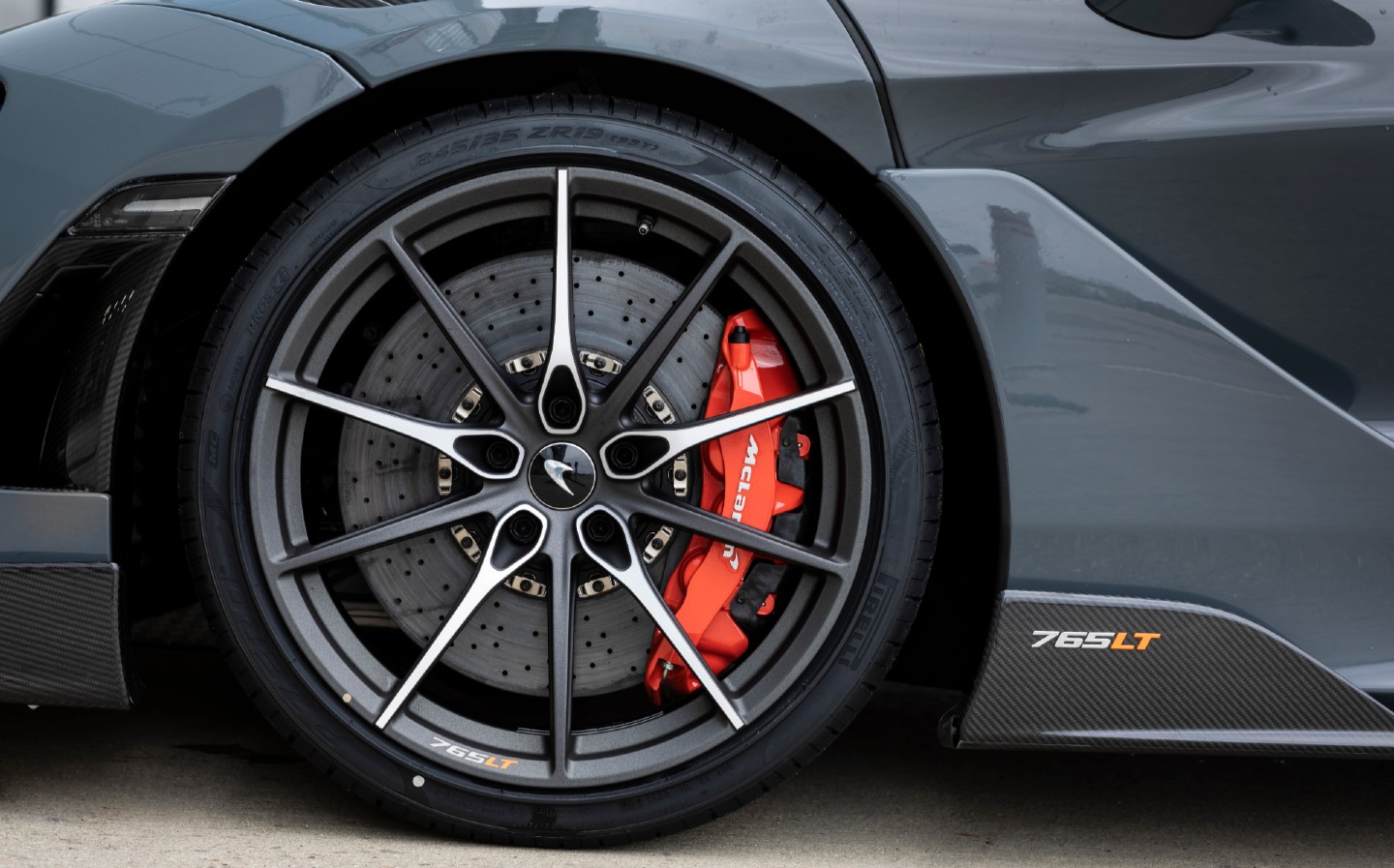 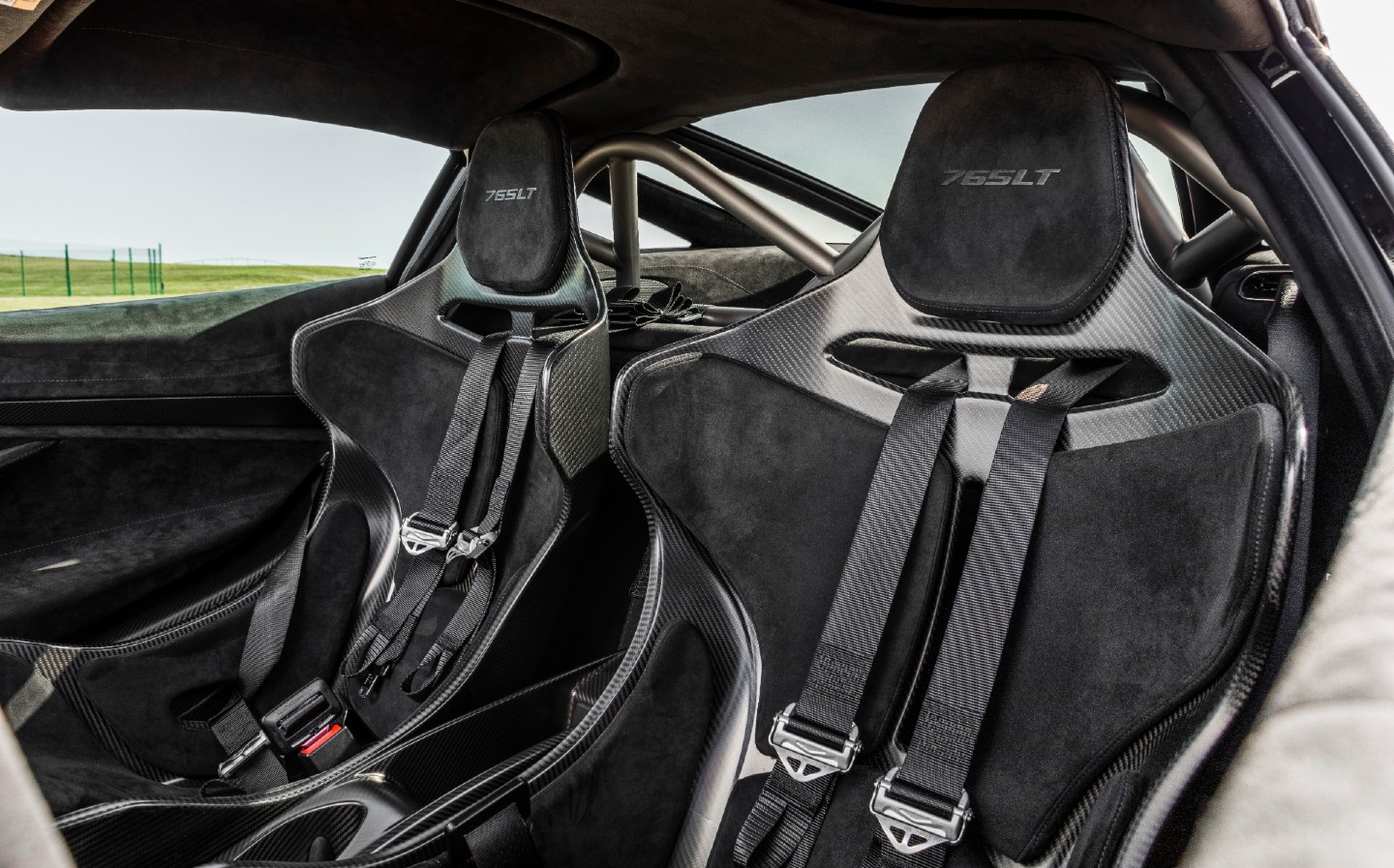 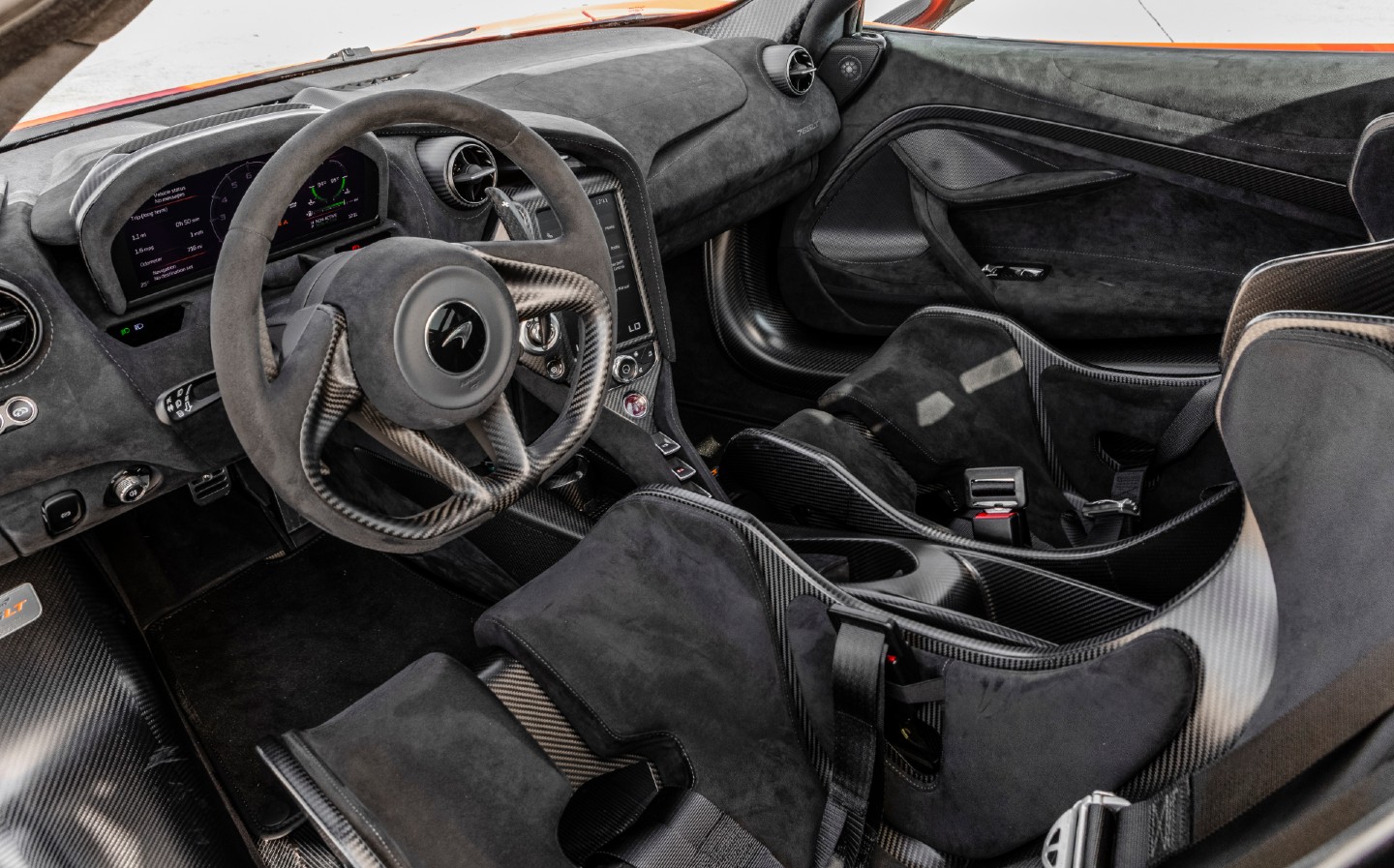 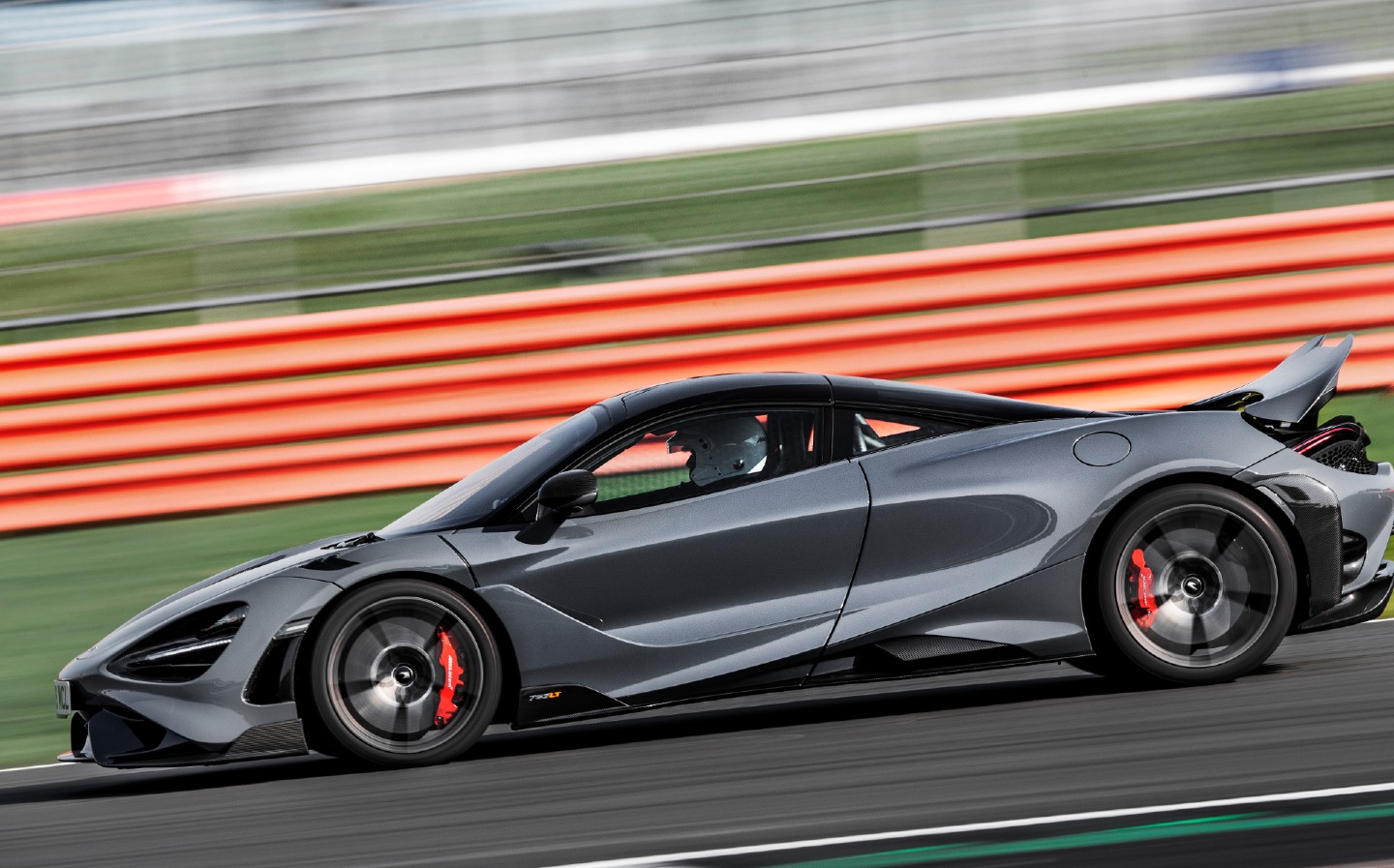 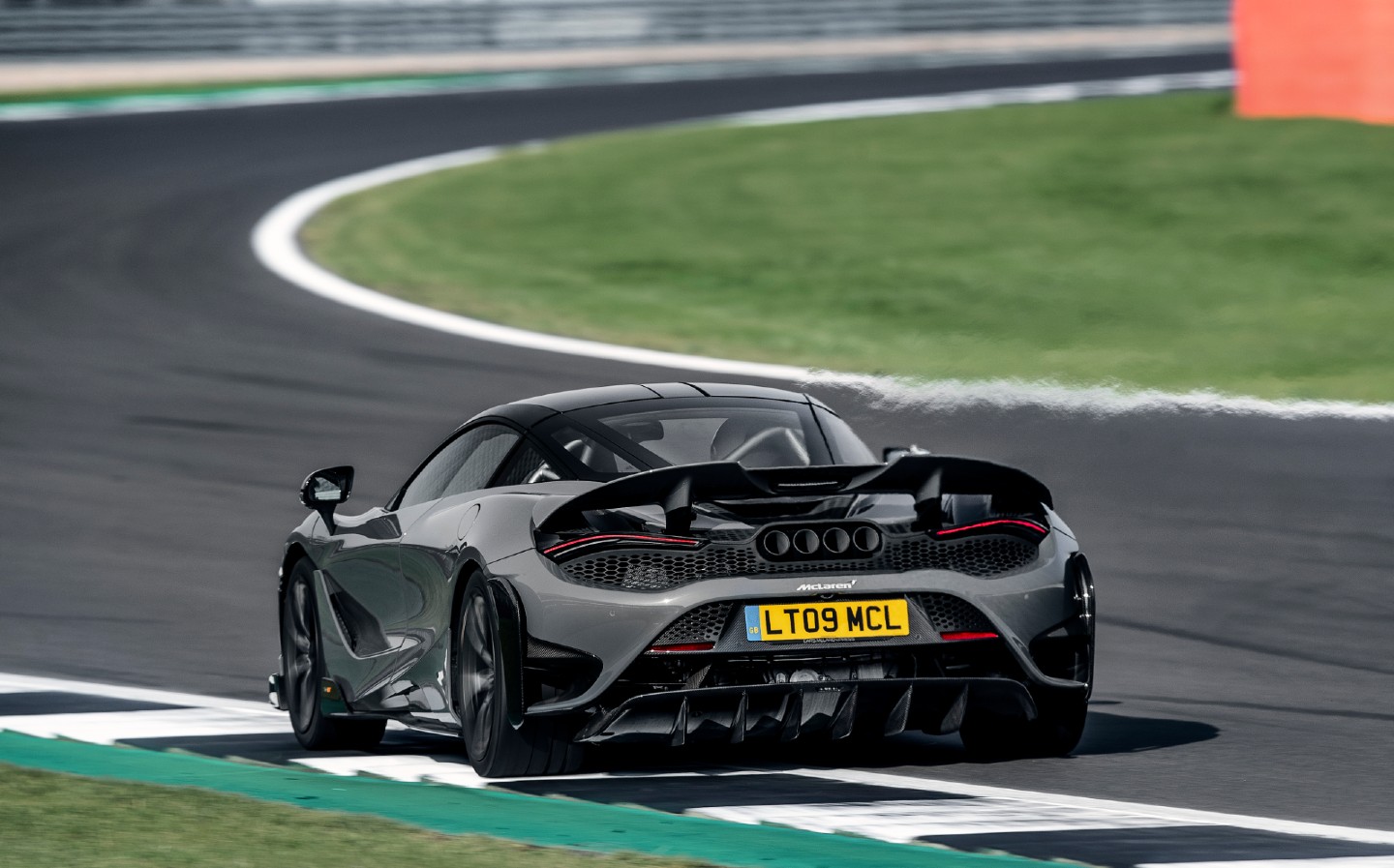 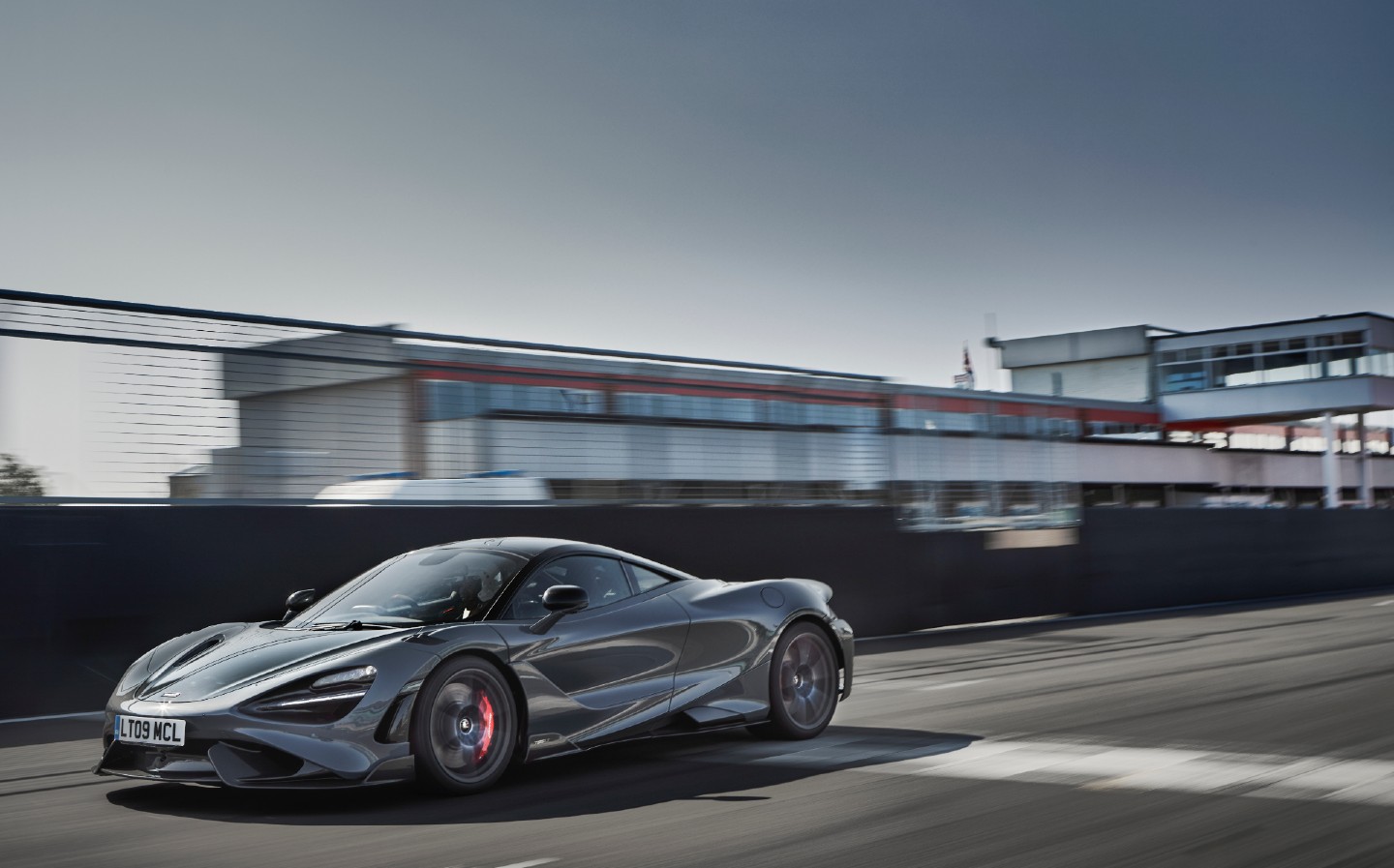 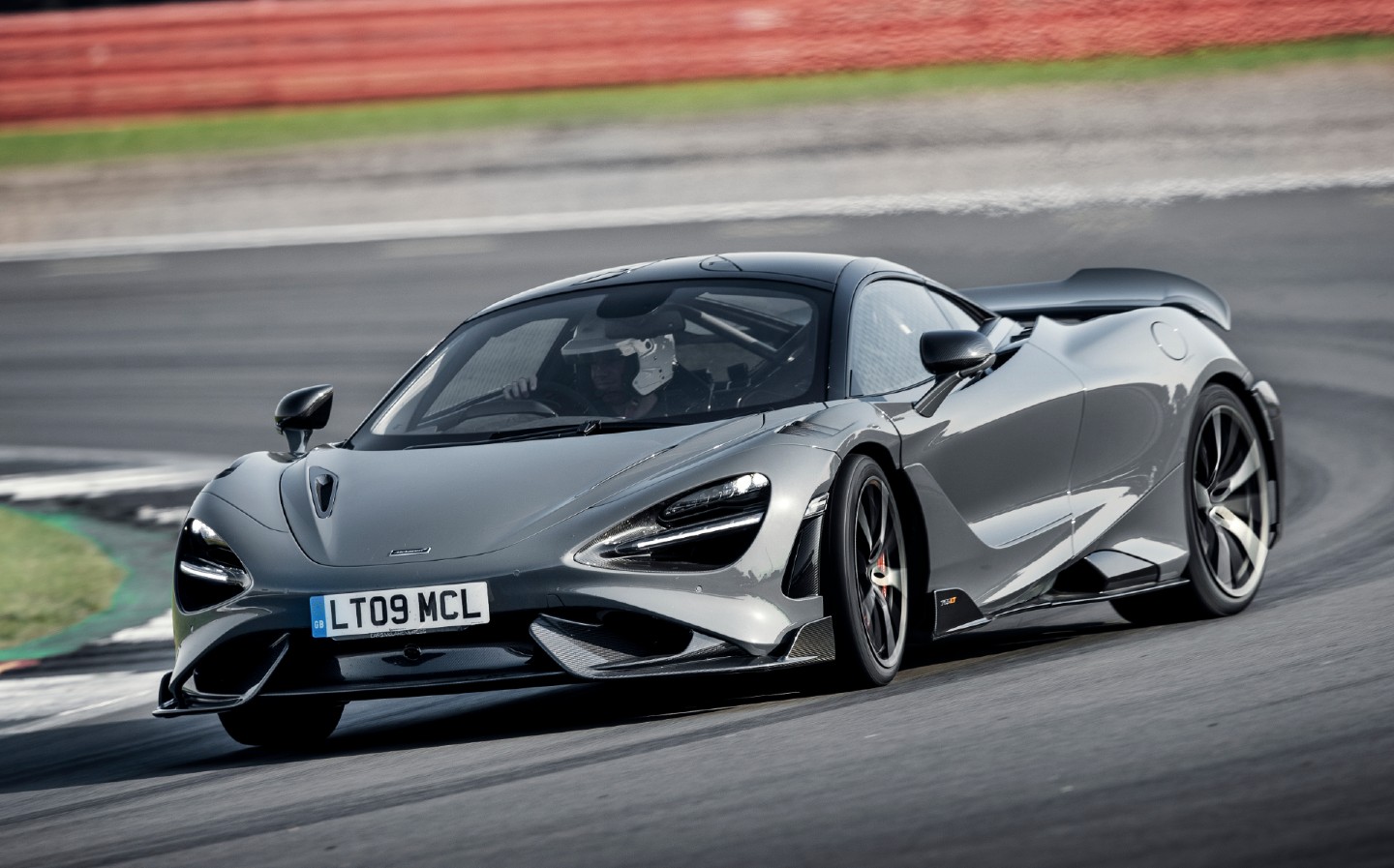 By Will Dron
Share Article
Wet and wild
At a glance
Pros
Incredible performance
Stunning on the brake
Stable, even in the wet
Cons
Not for the faint-hearted
Didn't experience dry-weather handling
Didn't get to drive it on the road
Specifications
Cars > McLaren > 765LT

REAR-WHEEL drive, 755bhp and a wet road is a combination that certainly focuses the mind. I know this because I spent an afternoon tickling the throttle pedal of a McLaren 765LT at a rain-soaked Silverstone circuit (not the same day the photos were taken, obviously), exploring the bounds of adhesion between tyre and asphalt in rather more detail than I’d have liked. These are conditions in which Ayrton Senna excelled but beyond what most mortals, myself included, would feel comfortable pushing a £280,000 supercar to its limits.

Still, this is Silverstone in September, so it comes with the territory — what was I expecting? On with the job.

The 765LT is a substantial development of the 720S, which previously sat at the top of the “Super Series” in McLaren’s arsenal. The 765 part of the name refers to both the number of horses produced by its twin-turbocharged V8 engine (765PS, or 755bhp) and the number of units being produced. The LT stands for longtail, a family of cars that dates back to the 1997 McLaren F1 GTR, with the emphasis on ultra-light weight, increased power and enhanced driver engagement.

Given that the 720S couldn’t really be regarded as a gutless porker, the engineers were forced to use every molecule of grey matter available to make it lighter, faster and more dynamic.

The toughest instruction from management was to remove 70kg from the 720S’s 1,419kg (DIN) kerb weight, which was no easy task given weight-saving was a focus in the first place – the 720S has a carbon fibre monocoque tub, for example. But shaving a few grams here and there – including switching to a new titanium exhaust that’s 40% lighter than the steel equivalent, reducing the thickness of the windscreen and side windows by 0.8mm, and switching to polycarbonate glazing at the rear – add up to a total saving of 80kg. This is the kind of forensic, obsessive approach to problem-solving for which McLaren has made its name.

The engine team was similarly single-minded in extracting every drop of performance from the powerplant. It’s still a four-litre twin-turbocharged V8 at its core but the forged aluminium pistons are bespoke, while it borrows the three-layer head gasket from the hardcore McLaren Senna (which sits in McLaren’s “Ultimate Series” of cars). The 765LT has also been given carbon-coated followers in the valve train, an additional fuel pump and a revised oil pump, while the engine management system has been tweaked for increased power, and improved torque delivery and throttle response compared with the 720S.

A gearbox tuned for 15% more-rapid acceleration than the 720S results in a potential 0-62mph time of 2.8 seconds, though it’s the 0-124mph time that McLaren is most proud of: seven seconds dead. Zero to 186mph takes 18.0 seconds and from there it’s not long before the car hits its 205mph.

Out on track the gearing and torque characteristics mean power seems to surge on and on, and the rear wheels seemingly able to rotate as if unimpeded by the ground on which they’re resting. On the wet Silverstone International circuit, shod with Pirelli P-Zeros rather than the usual Trofeo R rubber, joining Hangar Straight proved as hairy a motoring experience as I’ve experienced.

Threading it through The Loop, you brake lightly while changing down to third gear, then, taking care not to be too aggressive on the first lap, ease on the gas. Hello, wheelspin. Short shift into fourth and there’s a punch in the back as the cogs switch and the 765LT urges you on. You give the accelerator another squeeze; the back end writhes around like a lizard on a hotplate.

“It does that in the dry, too,” my racing driver passenger tells me over the intercom (the enhanced quad-exhaust soundtrack is glorious but muted with the helmet on), yet I can’t help feeling it might be a significantly less bum-twitching experience when the sun’s out. As stimulants go, this has amphetamines licked. I imagine.

Hangar Straight could be completed without shifting up from fifth gear but putting it in sixth, to drop the revs and help settle the car, revealed the aero of the 765LT is still no match for its outright grunt. Even in the wet it’s possible to hit 150-160mph before the braking zone into Stowe corner, and despite 25% more downforce over the 720S thanks to a 5mm lower front end, extended front splitter, elongated active rear wing work and extended rear diffuser, the rear wheels could still be made to lose traction approaching those speeds.

In Active mode the electronic stability systems allow the back end to remain eye-wideningly lively but the amount of power being fed to each of the rear corners is controlled by the computer to at least help you keep the nose pointing in the right direction. The mid-engined balance helps prevent any kind of pendulum effect, too. So although on the power out of the blisteringly-quick Stowe corner in fourth gear I found myself adding an armful of opposite lock, the car didn’t quite swap ends. There’s a seat-of-your-pants communication there – it comes very swiftly indeed, but the 765LT isn’t a car that throws surprises at you.

If the way it generates speed is mind-blowing, the way it scrubs it off is perhaps more impressive, especially given the inclement conditions of our track experience. The brakes – carbon ceramic discs with forged aluminium brake calipers (the six-piston front units and pads in the MSO Clubsport pack are also borrowed from the Senna) – combined with the active rear wing that rises up under braking, offer tremendous, linear stopping power even in the wet, and I felt far more confidence on the brake pedal than the throttle. 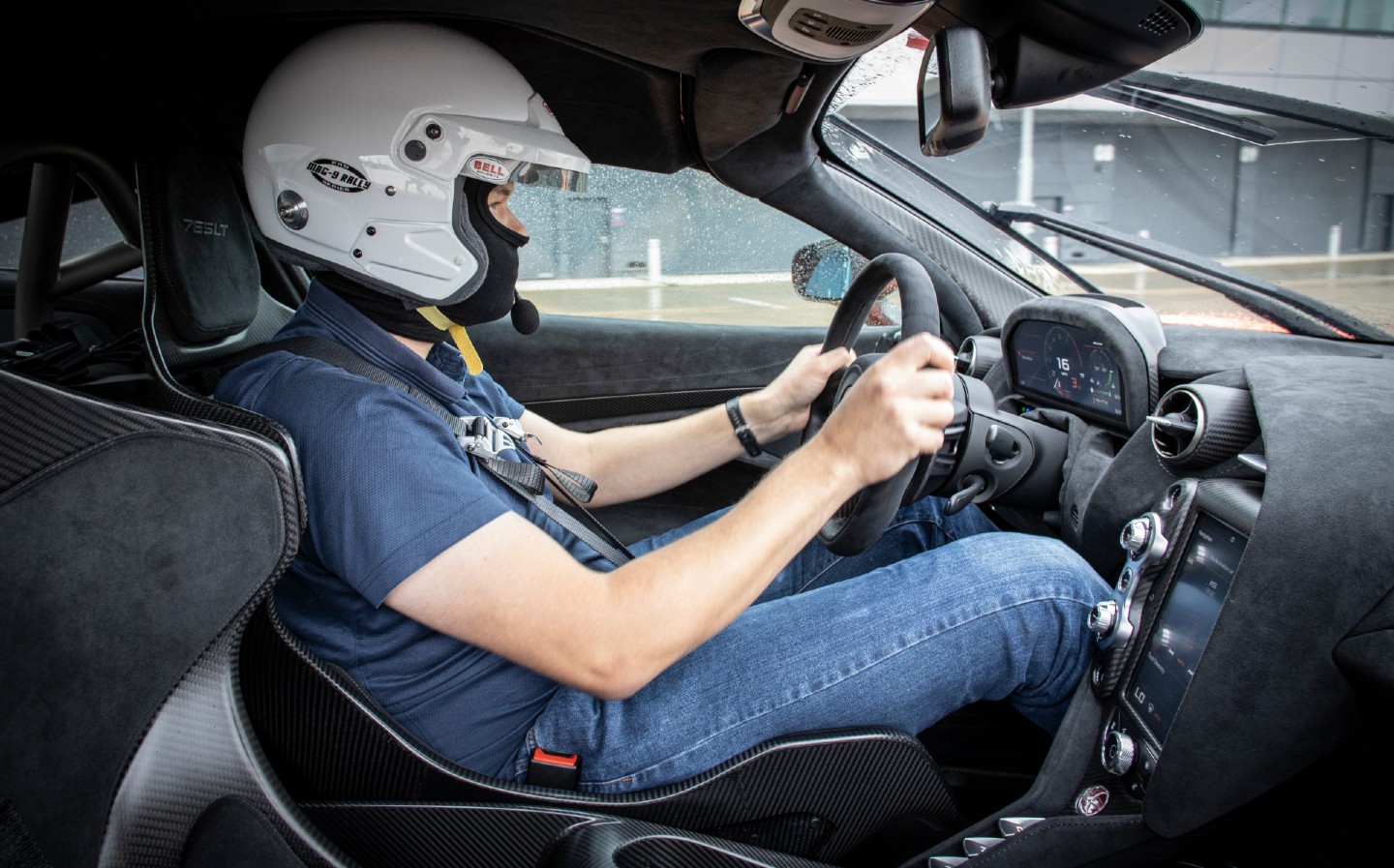 We didn’t get an opportunity to drive the car on the road – its character there remains to be seen – and the rather extreme conditions of our track test didn’t lend themselves to a close examination of the interior (I barely even looked at the instrument binnacle, truth be told, such was the intensity of the driving experience), though the ultra-thin carbon seats (again coming from the Senna) hold you tight without being uncomfortable.

For the full 80kg weight saving the air conditioning and audio system are deleted as standard but can be added at no extra cost, and 360-degree cameras can be added, too, while eight interior colourways are available, with bespoke options from MSO. MSO will also provide you with a naked carbon exterior finish, if you like … at a cost.

For a car like the 765LT, it’s the performance upgrades that are likely to win bragging rights, as well as superiority on the track. It’s a car that is seconds quicker round a circuit than the 720S, making it a proper plaything for anyone with the time, money, skill and inclination. It’s not quite as focused as the Senna when it comes to track dominance but it’s not far off, and fits much more naturally into the street environment.

This appears to be a winning combination: the entire 2020 allocation have found homes, representing around 40% of the total allocation. Early interest in the 2021 production run is strong, according to McLaren, which is a good news story for a British manufacturer that has been in the headlines for all of the wrong reasons so far this year.