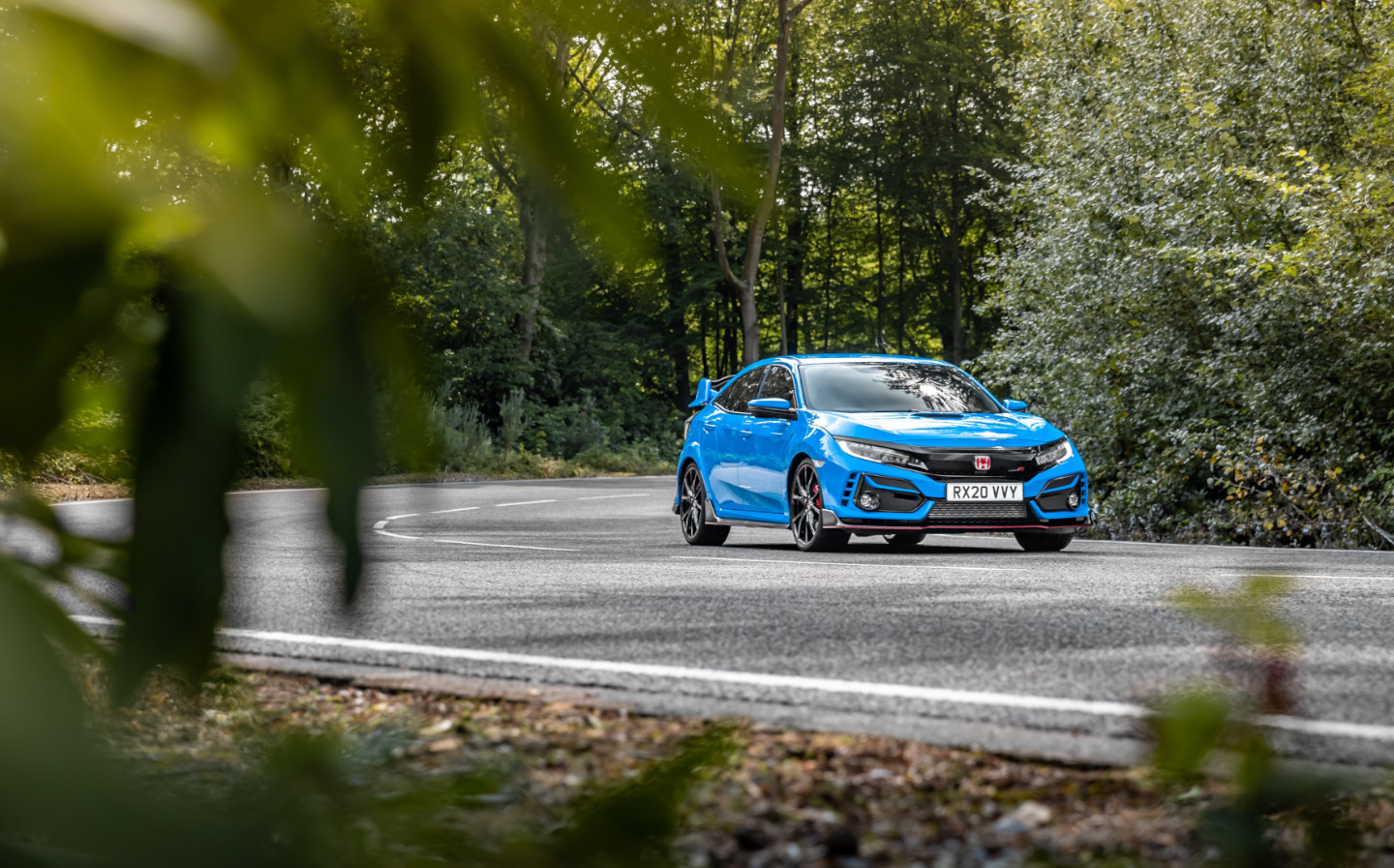 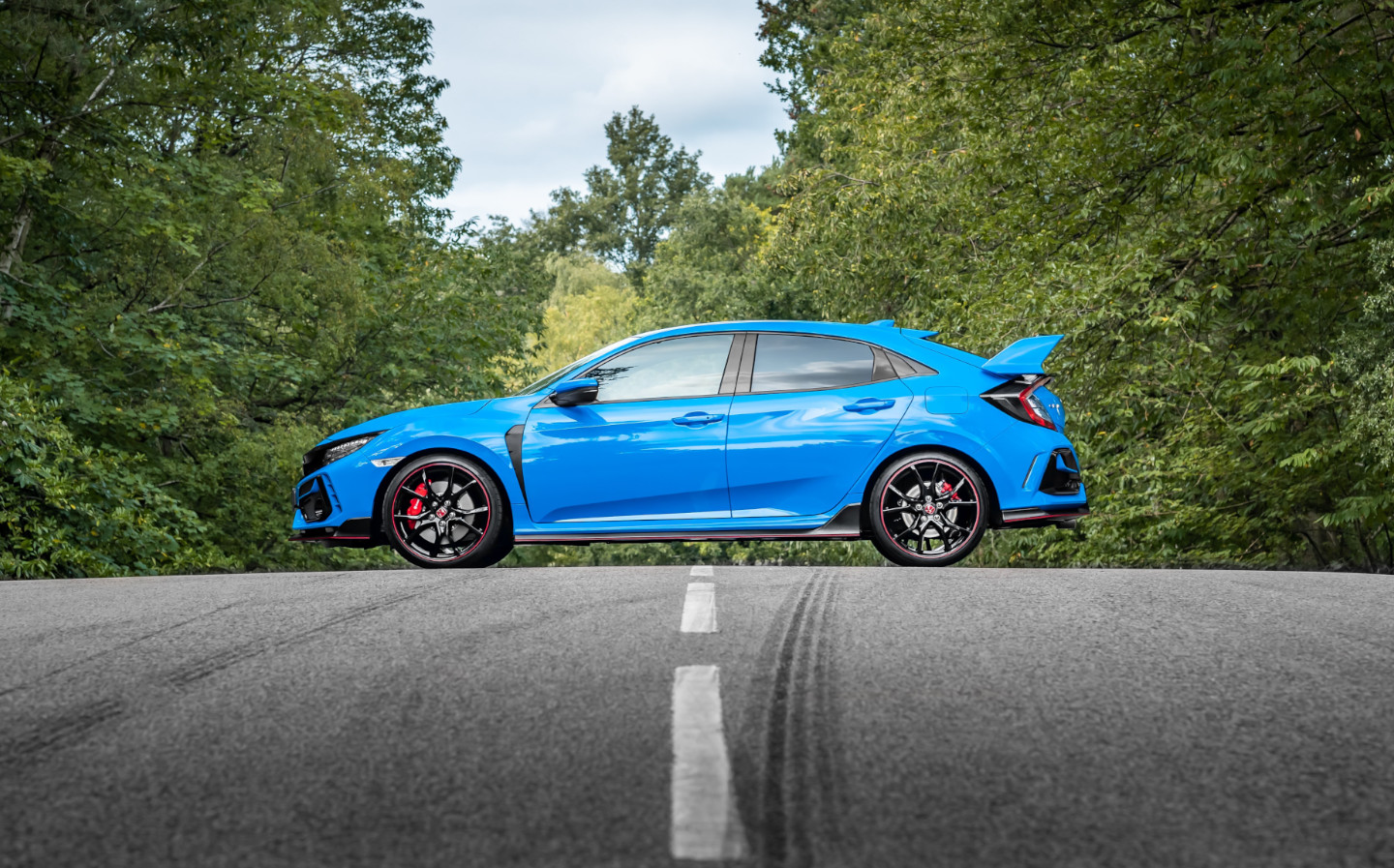 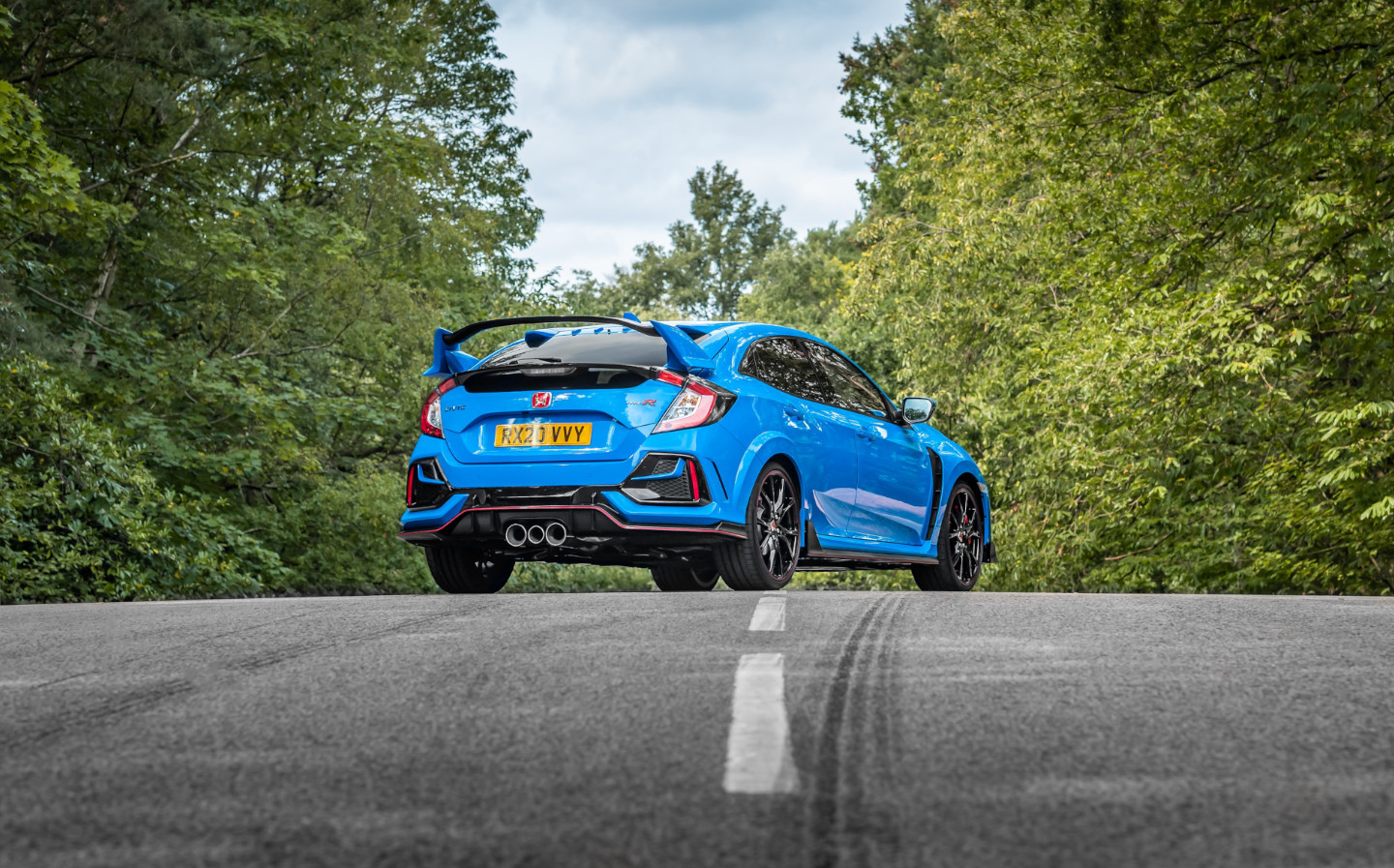 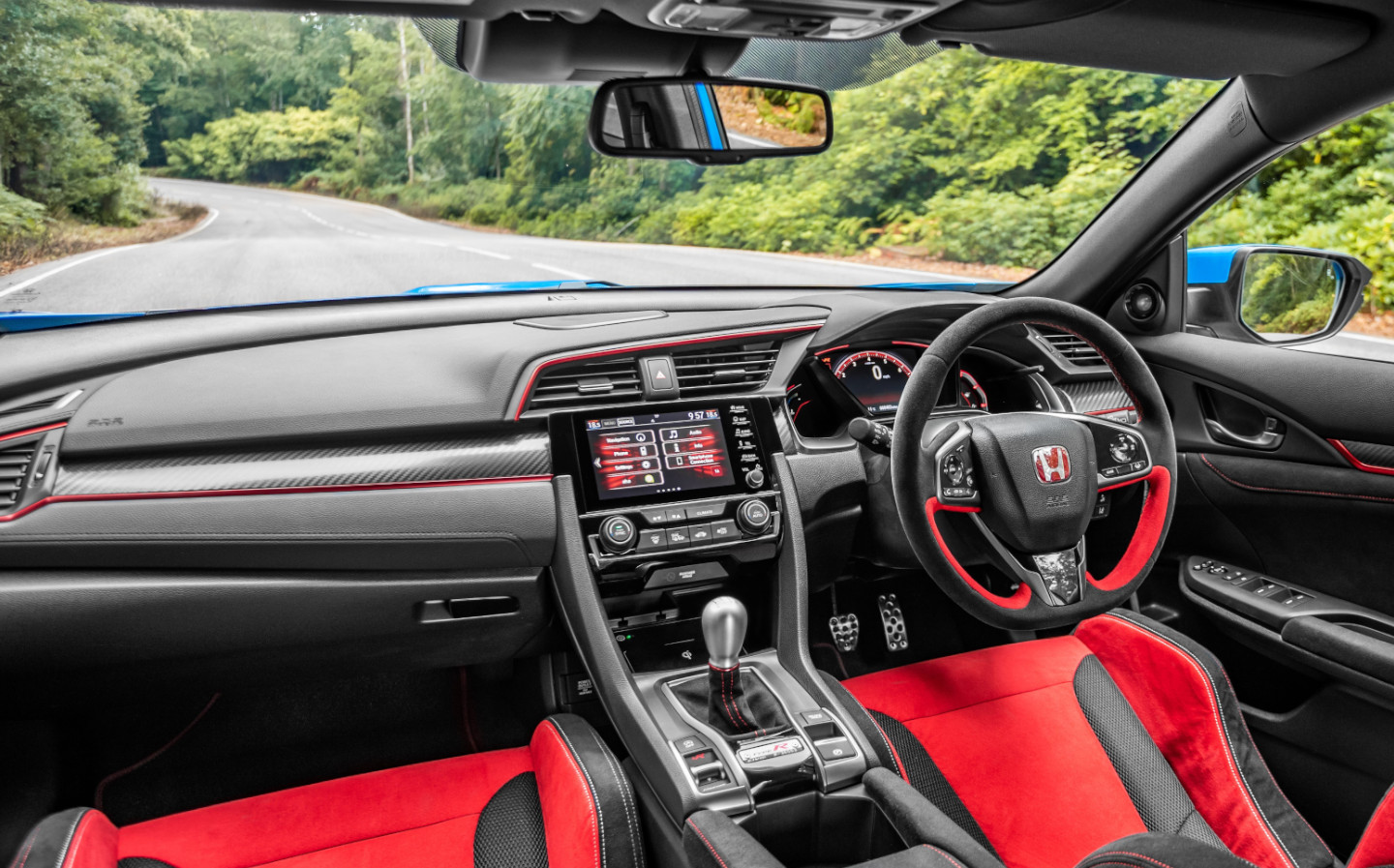 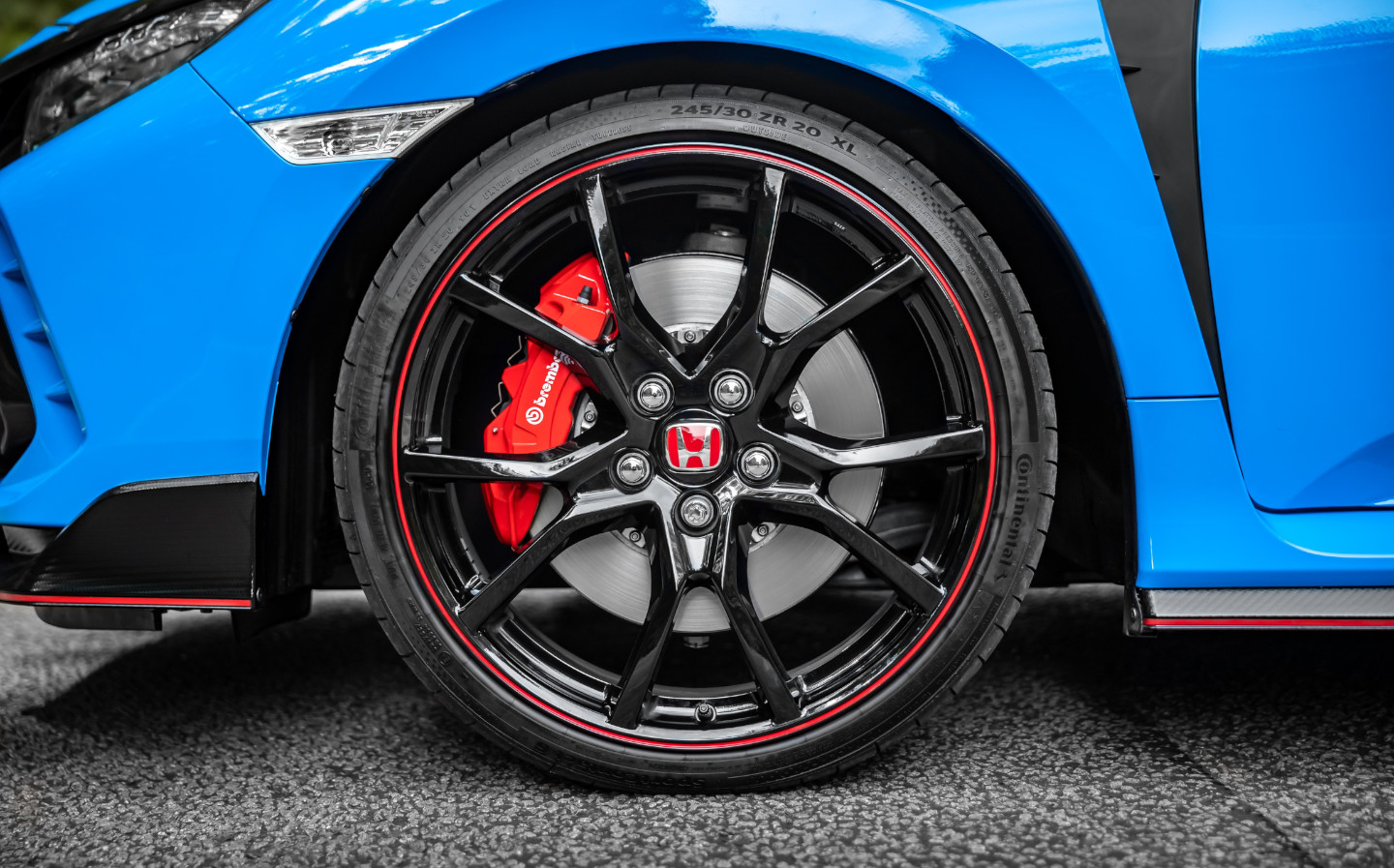 THE TRUTH is, Honda didn’t have a whole lot to improve when it came to the Civic Type R, the current generation of which hit roads in 2017. Yes, the hot hatch’s looks were polarising and the interior left some things to be desired, but when it came down to it, the outgoing model was everything a hot hatch needed to be: quick, fun and practical.

However, Honda’s engineers must have been a bit bored during lockdown as they’ve had the opportunity to hone in on the minutiae of the Type R’s performance. Even after a couple of glances, it’s not clear that the new FK8 Type R has changed in appearance at all. For all intents and purposes, it looks the same as the outgoing model. There’s been an almost imperceptible 13% increase in the size of the grille, which apparently helps cooling when you’re out on the track, and the lower fog light surrounds have been redesigned, but the overall loudness of the Type R’s aesthetic means you’re unlikely to notice changes to such small individual details.

Whether you like the look of the facelift therefore depends heavily on whether or not you liked it before. I didn’t, and therefore don’t, but you do feel as if there are some people who would look at it with glee. Honda has also embraced the Type R-ness of the new Type R with a few new colours (including a vibrant and pleasing shade called Racing Blue for the GT version) that double down on the aesthetic Honda has cultivated with the car thus far.

And if you are one of the many who are put off by its outré looks, there is now a more sensibly-dressed Sportline version, which does away with some of the more Fast and Furious features like the huge rear wing, for a more understated look. The level of red accenting on the inside has been scaled back in the Sportline, too.

The interior, which has often been cited as a weak spot in the Civic Type R when compared to other hot hatches, has been scattered with a few improvements. The steering wheel is now draped in Alcantara as standard, and the GT version also has a contactless phone charger, which always feels like a little luxury. The seating position, which has been a bit high in some previous generations, is perfect, and the seat itself is incredibly comfortable if not garishly coloured, as well as being the lightest that Honda has put into a Type R.

There are, however, still a couple of issues. While the rolling switch on the console that differentiates between driving modes does so with pleasing weight, the steering wheel buttons feel a bit Nokia from 2004. The infotainment system also still leaves a lot to be desired compared to competitors and I found myself connecting up Apple CarPlay quite promptly. Most important functions are still controlled through physical buttons rather than the screen, though, so it’s not as stripped back and minimalist as some rivals’ cabins.

The real party piece on the inside of the Type R is the short-throw gearstick. The six-speed manual has been redesigned in aluminium in a teardrop shape that red-badge-Hondaphiles will find satisfying, and then weighted, meaning that shifting into gear is accompanied with a confident, satisfying, self-assured thunk. It is, in fact, such a pleasing shift that I found myself changing gear perhaps more often than I would in another car, a habit that I also found myself slipping into when I had a drive of the 2001 EP3 Type R. Like in the EP3, it’s quite thrilling just slamming through the gears, and the immediacy of the changes is impeccable. 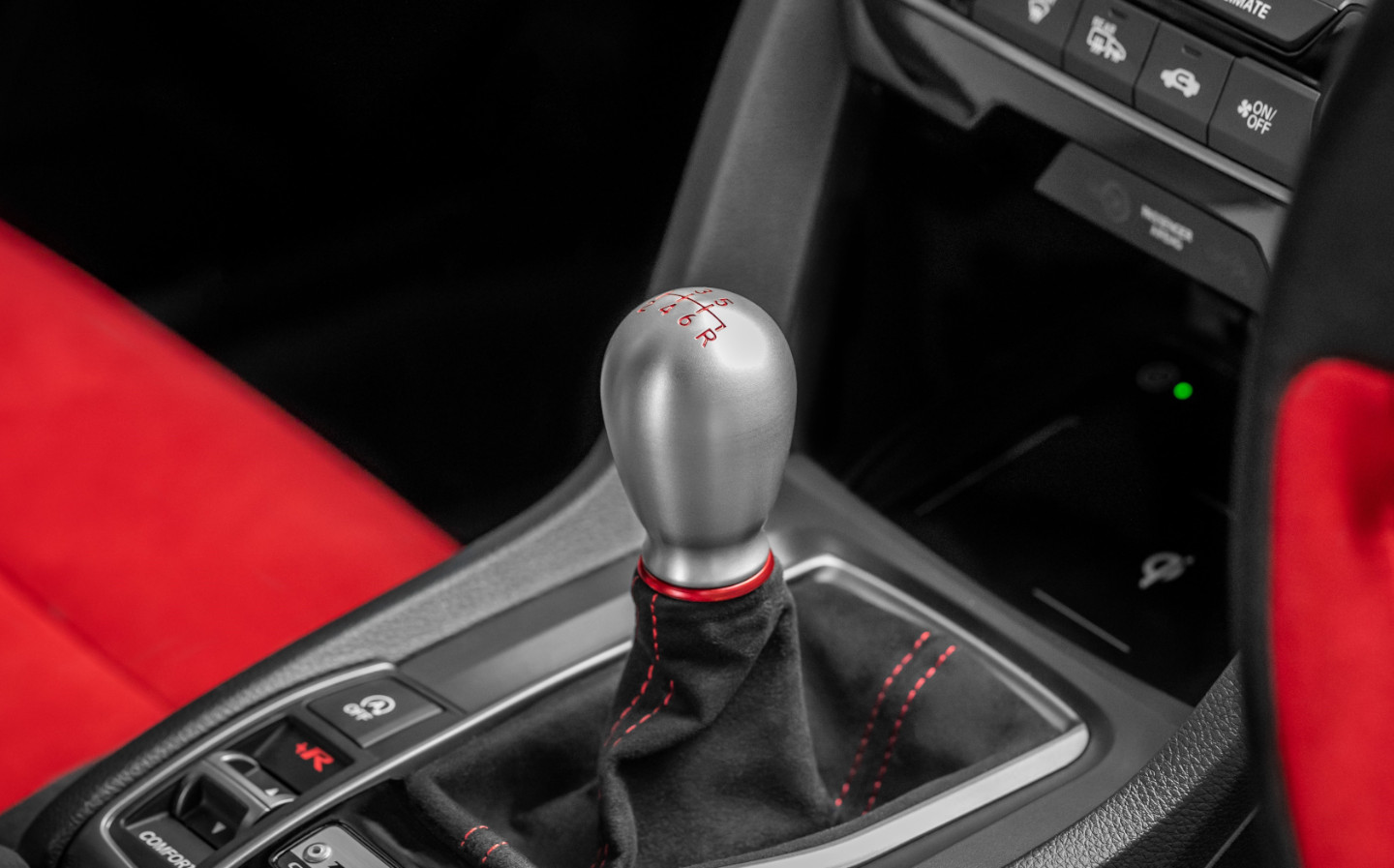 Under the bonnet is the same 2.0-litre turbo engine as before, in a classic case of “if it ain’t broke, don’t fix it”. It’s been praised since the 2017 release and for good reason, pumping out 316bhp at 6,500rpm, resulting in a 0-62mph time of 5.8 seconds. That makes it more powerful and quicker off the mark than the new Golf GTI, although when the more extreme Golf R comes out it’ll likely be pipped to the post. Either way, when you put your foot down, the Civic Type R definitely doesn’t slack, and it’s a deliciously responsive powerplant.

There are three driving modes: Comfort, Sport and R+, which all feel pleasantly distinct from one another. Comfort is, well… comfortable. The adaptive dampers relax, meaning the ride becomes more supple. The cockpit feels nicely isolated, and it’s impressively quiet and sedate. The steering feels as precise as in any other of the modes, and with such satisfying gear changes, it’s not in danger of becoming boring.

The R+ setting is stiff and sporty, of course, and it is easy for the Type R’s speed to get away from you when you’re in this mode, especially if you’re acquiescent enough to be egged on by the throatier exhaust soundtrack. Perhaps best reserved for the track, that one. Sport feels like a happy medium to use for either the bulk of driving or as a switch up from Comfort, and it’s the one that the system defaults to when you start up. Sport mode offers enough character to make you remember you’re in a Type R, with a pleasing, distant engine noise that isn’t overbearing, but not so much get-up-and-go that you’re spurred into risking licence points every time you get in.

The suspension and steering in the newest version of the Type R have been reworked, with the Adaptive Damper Control upgraded so that it responds quicker, meaning that handling response and ride are both even better than they were in the previous version. Geometry in the front suspension has been tweaked, too, with the aim of reducing torque steer (which can be an issue in powerful front wheel drive cars) and making the car feel more stable at higher speeds. The changes to the suspension have also improved stability under hard braking, enabling you to brake harder and later into a turn. 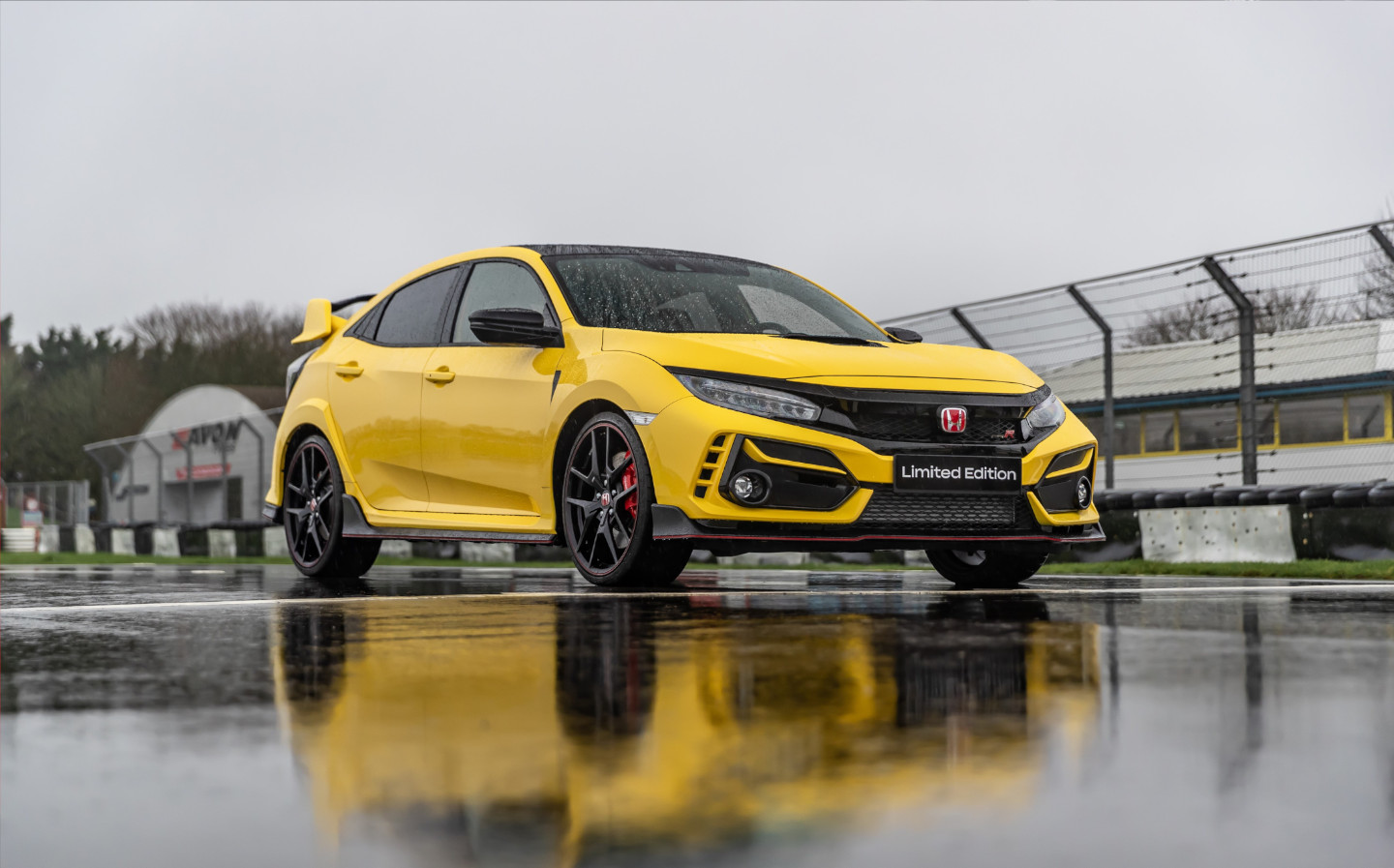 Out on the track the Type R’s astounding grip becomes evident despite the lack of four-wheel drive, although the dampness of the track on the day I drove it meant that it wasn’t quite possible to take full advantage of the Michelin Pilot SportCup 2 tyres that come on the Limited Edition model, of which only 20 are coming to the UK, out of 100 headed to Europe as a whole. Decorated in a bespoke “Sunlight Yellow” to mark it out as the lairiest of the pack, pleasantries like the infotainment system and air conditioning have been stripped out to save 47kg, and sound deadening has been reduced, meaning that the engine and the sound of your own intake of breath as it gets going are your only soundtracks.

It is also out on the track where the improvements to the braking become evident. Slowing sharply into a bend from a high speed doesn’t feel especially panicked, or require too animated a slam of your foot.

At just a touch under £40,000, the Limited Edition is likely to be for real enthusiasts only, and in the UK it has been just so, with all 20 models sold out. Further down the ladder prices start at just under £33,000 for the entry level, which doesn’t seem too unreasonable considering that’s still less than the new Golf GTI. And there isn’t much room to make it more expensive with extra additions, unless you want to deck it out with carbon mirror caps or — to make it extra inconspicuous — a carbon rear wing.

So what we have here is incremental improvements to an already hugely-satisfying hot hatch package; the chassis, the handling and overall driving experience. There are still a couple of undeniable flaws in the infotainment system and the styling (both exterior and interior), but once your eyes adjust, there are few real world cars that can be more engaging to drive.