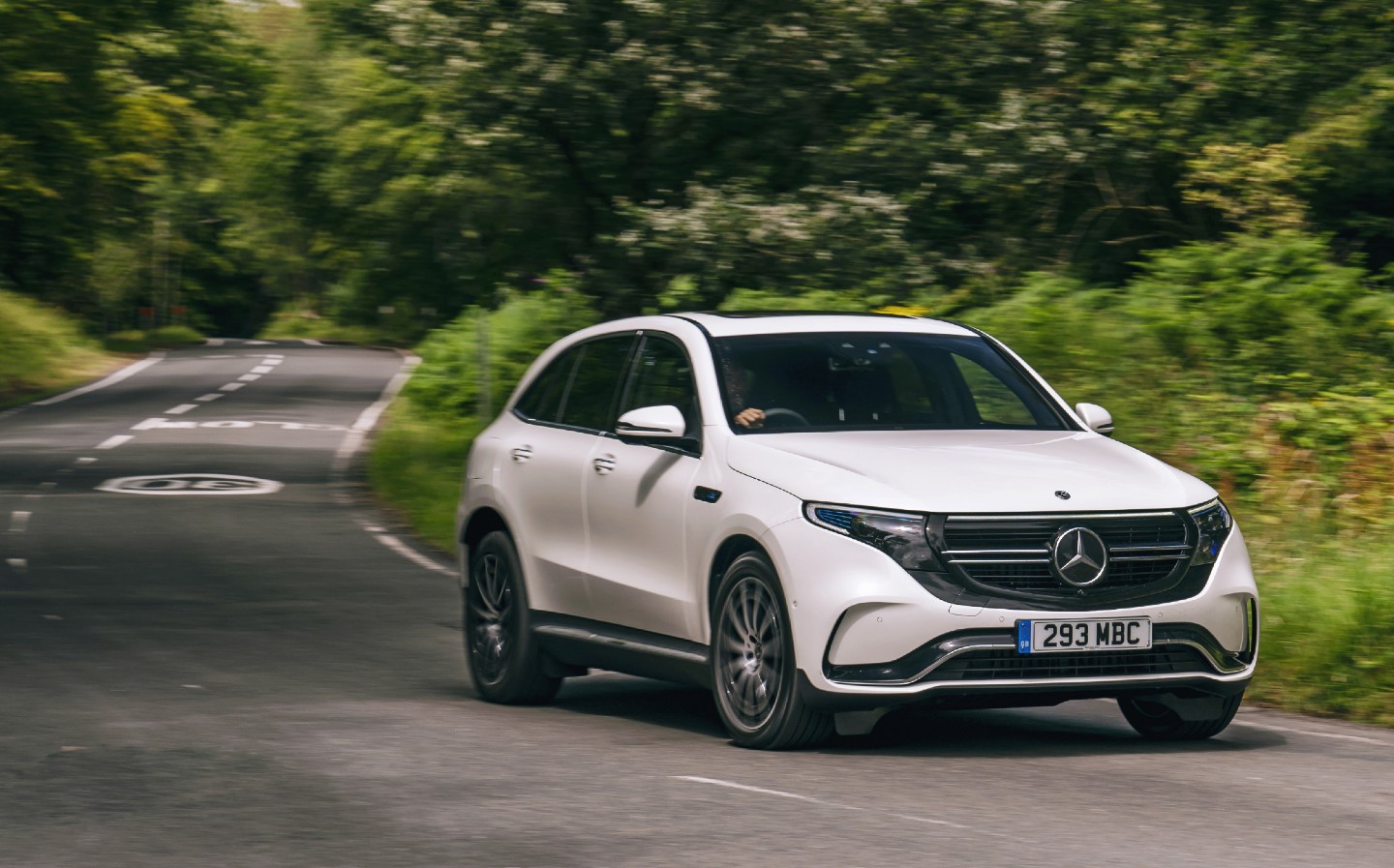 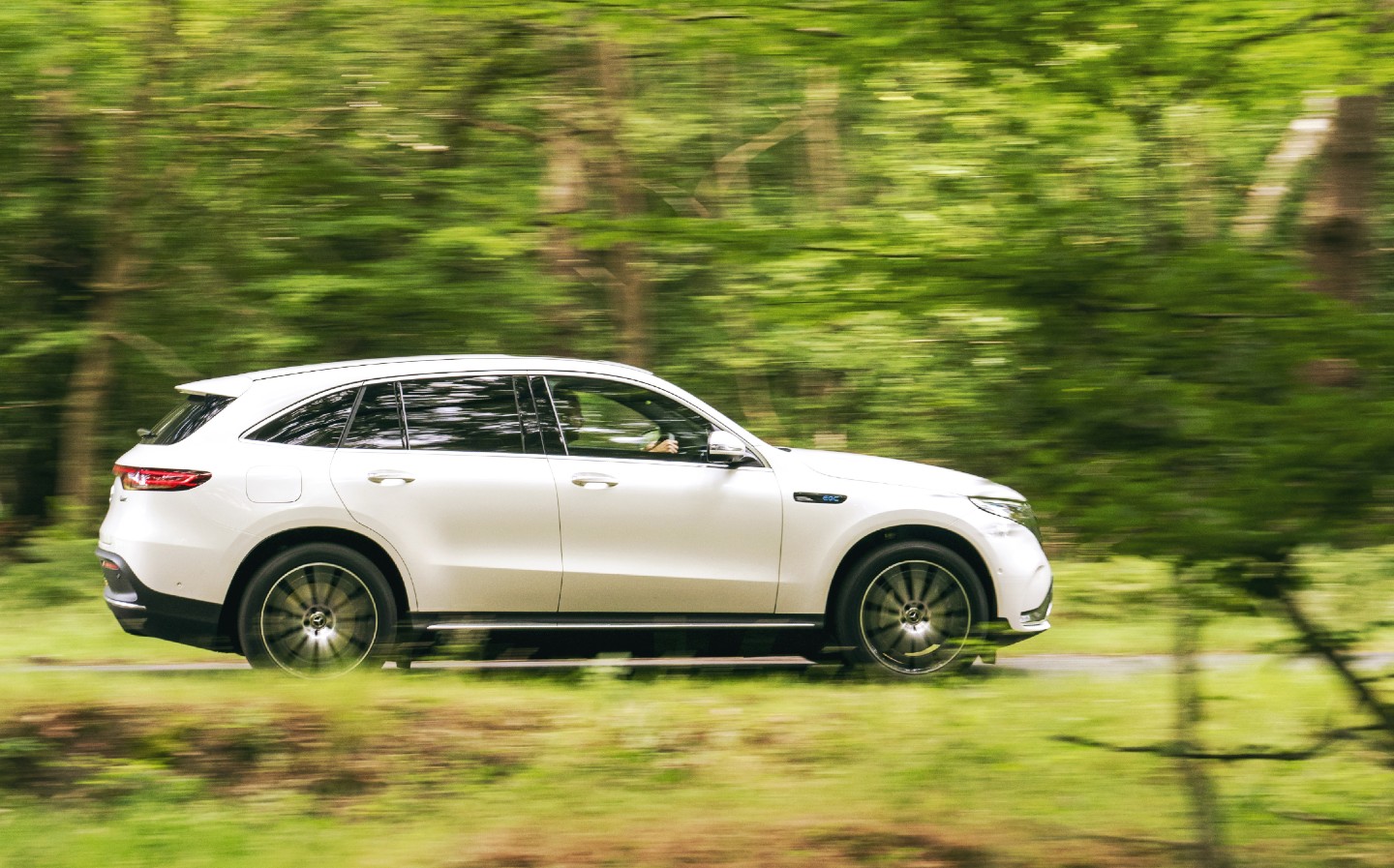 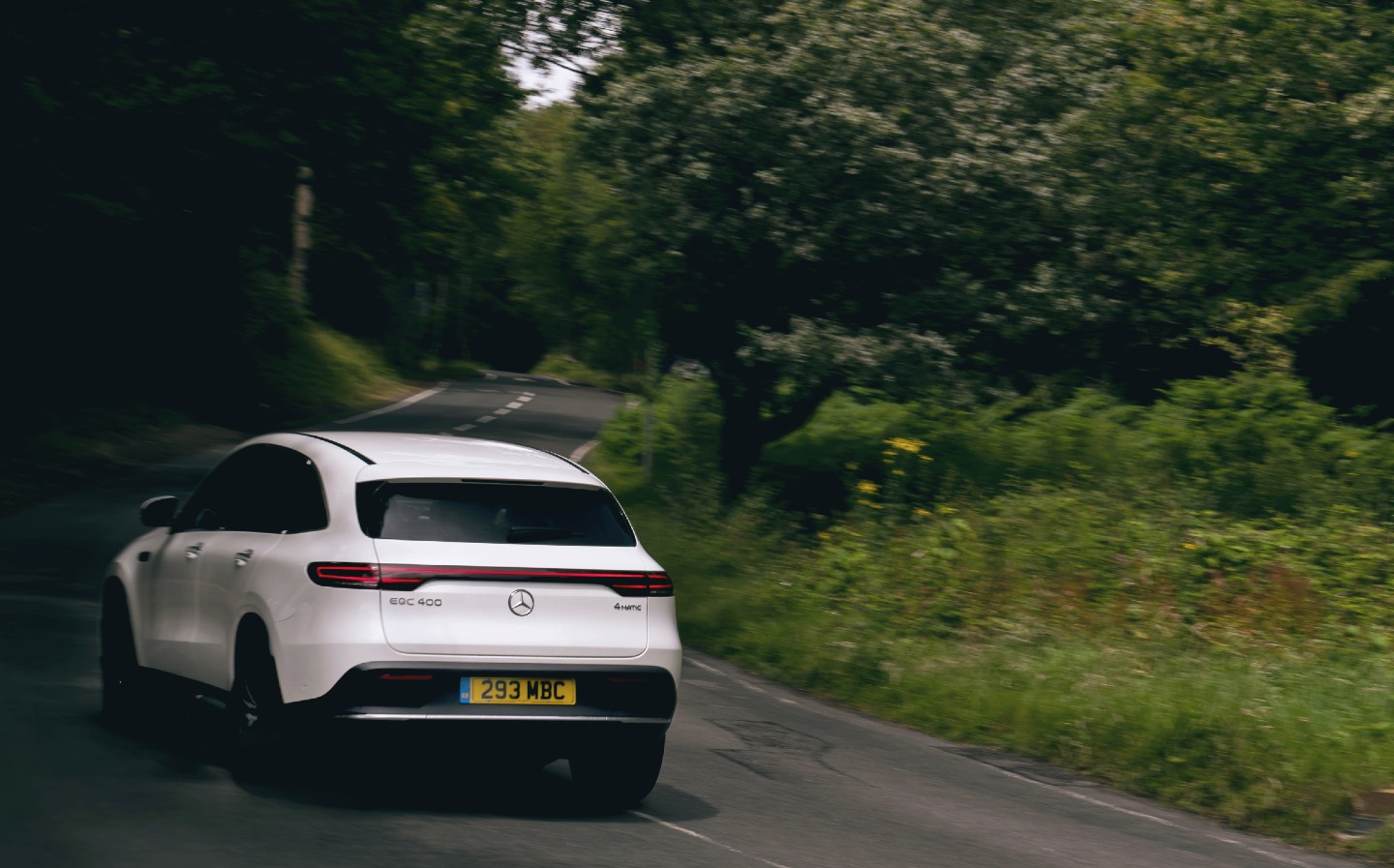 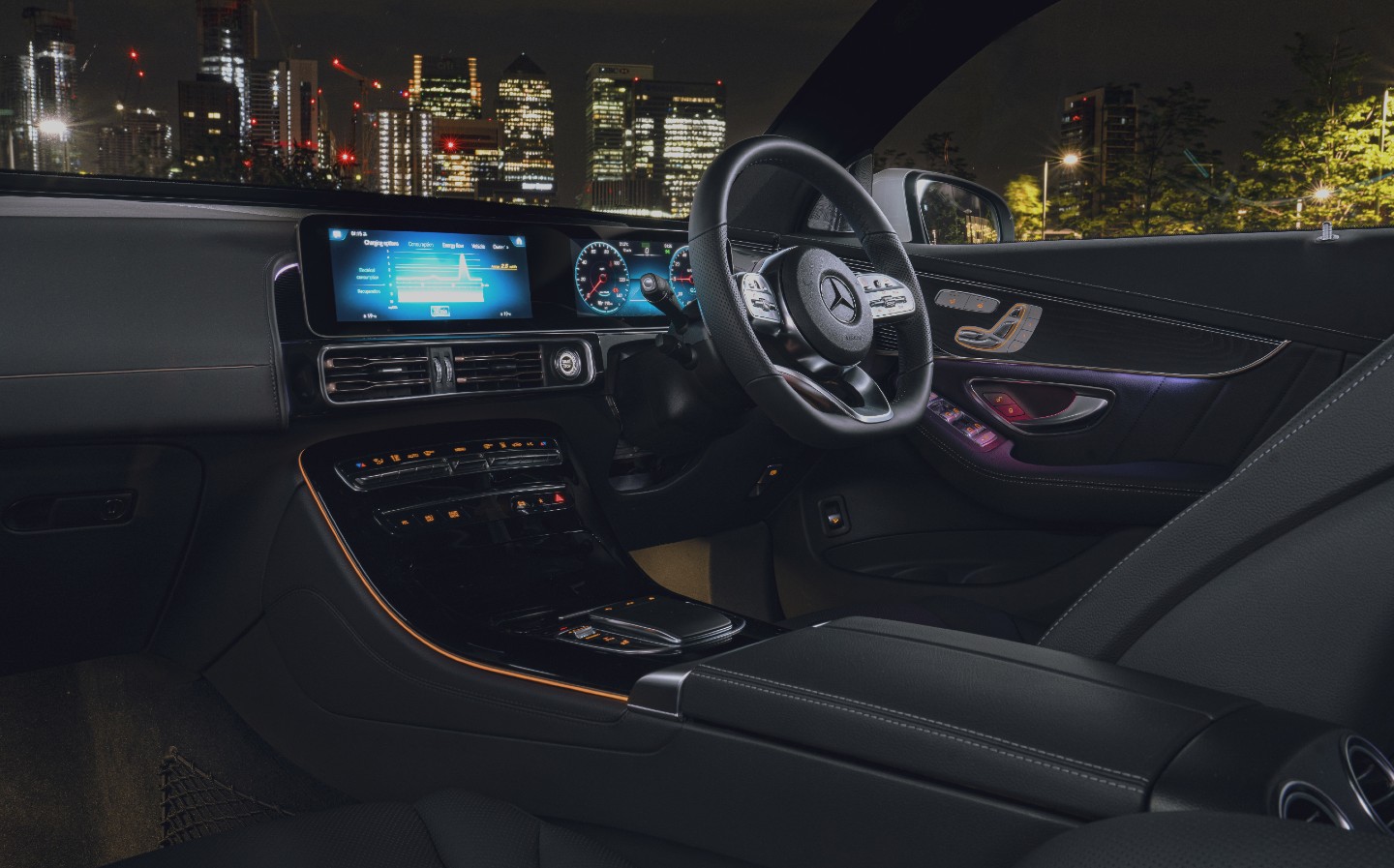 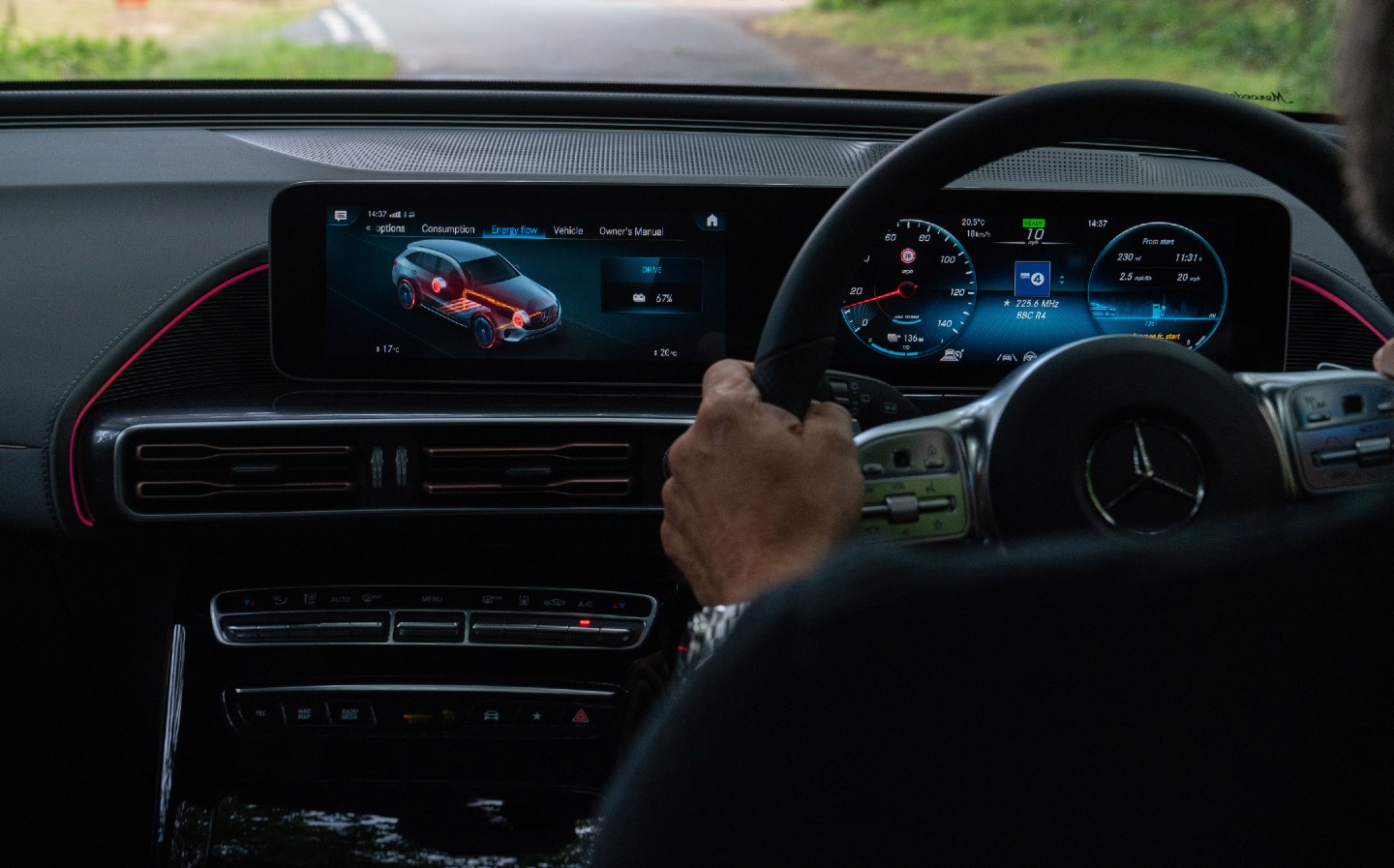 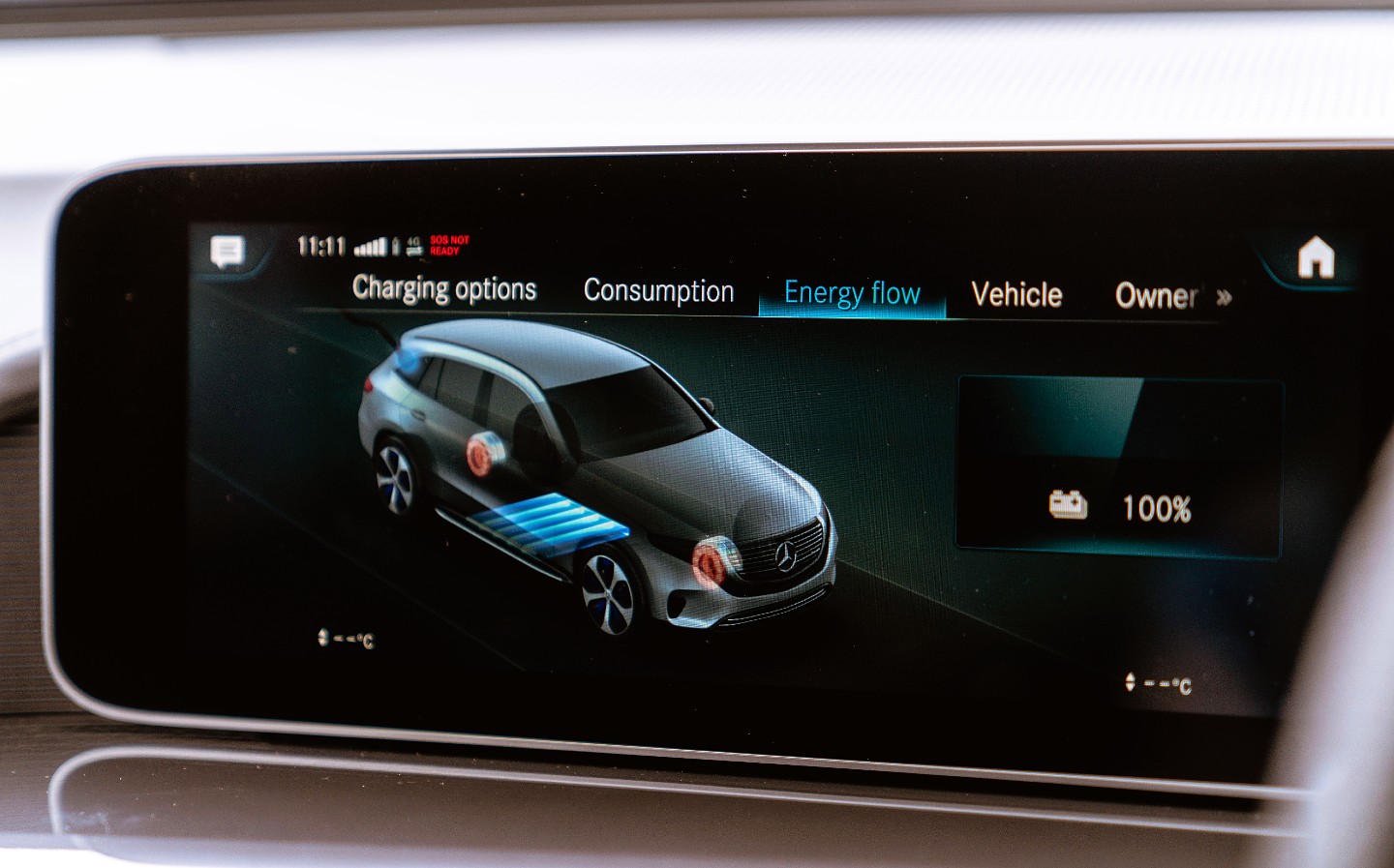 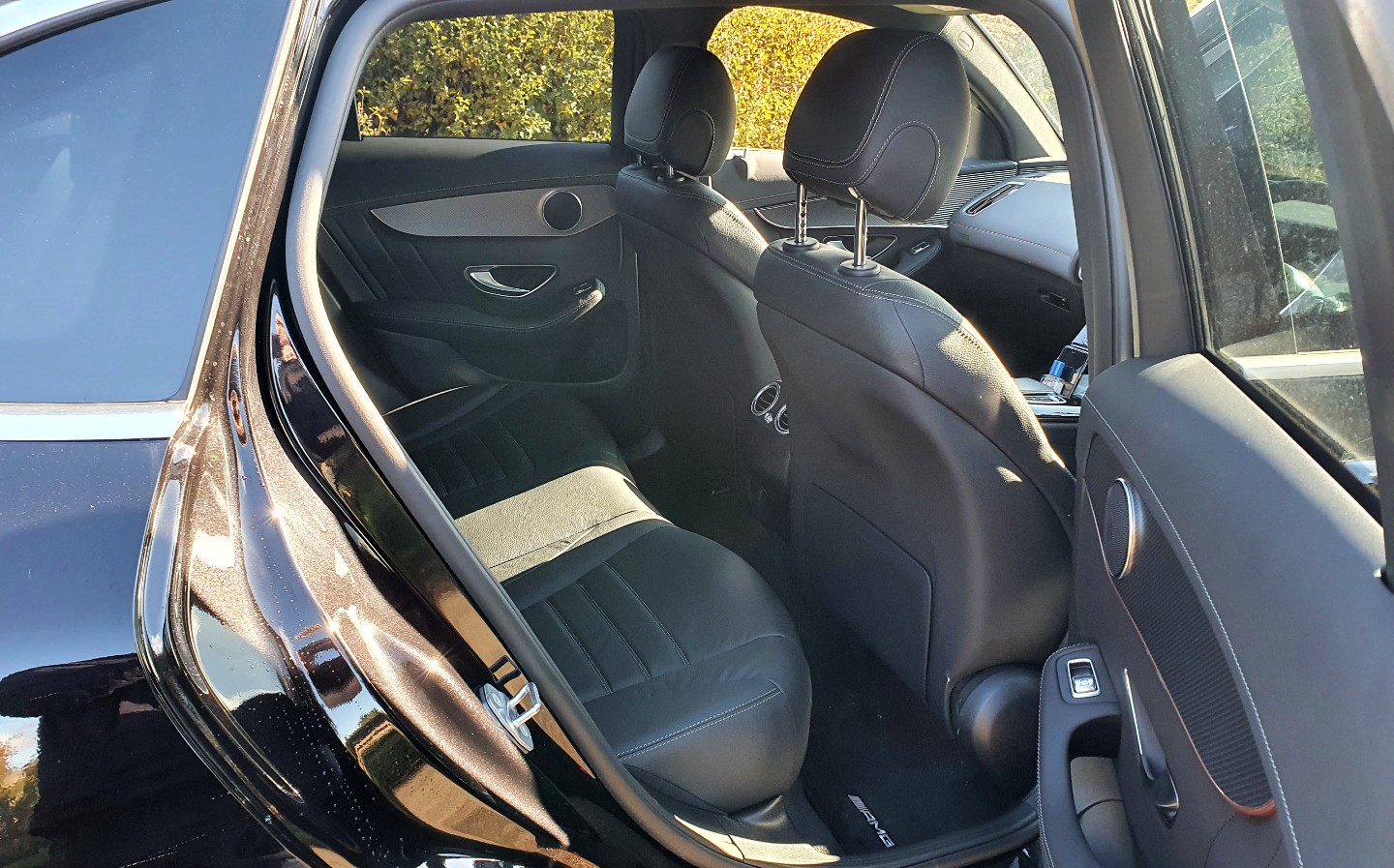 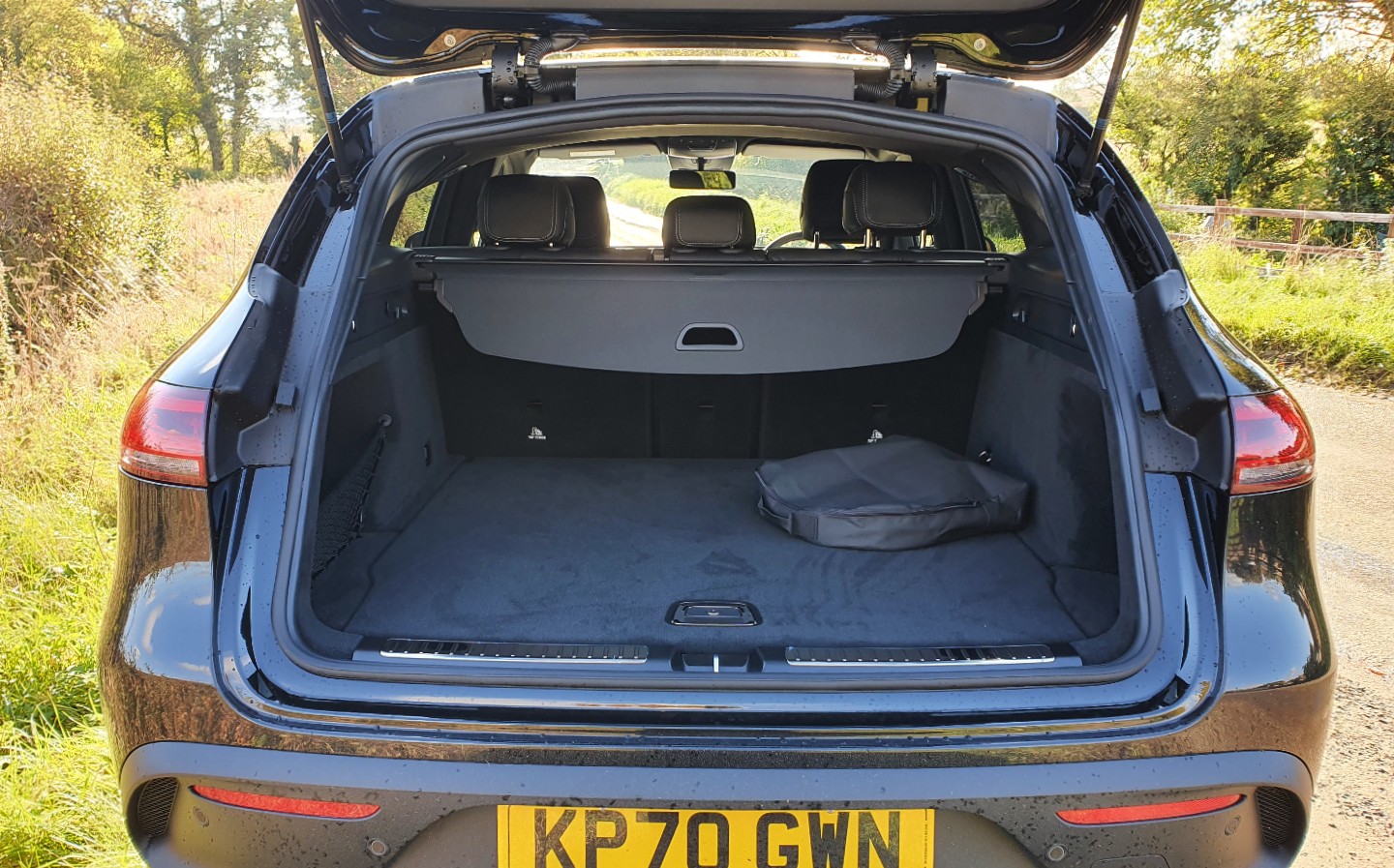 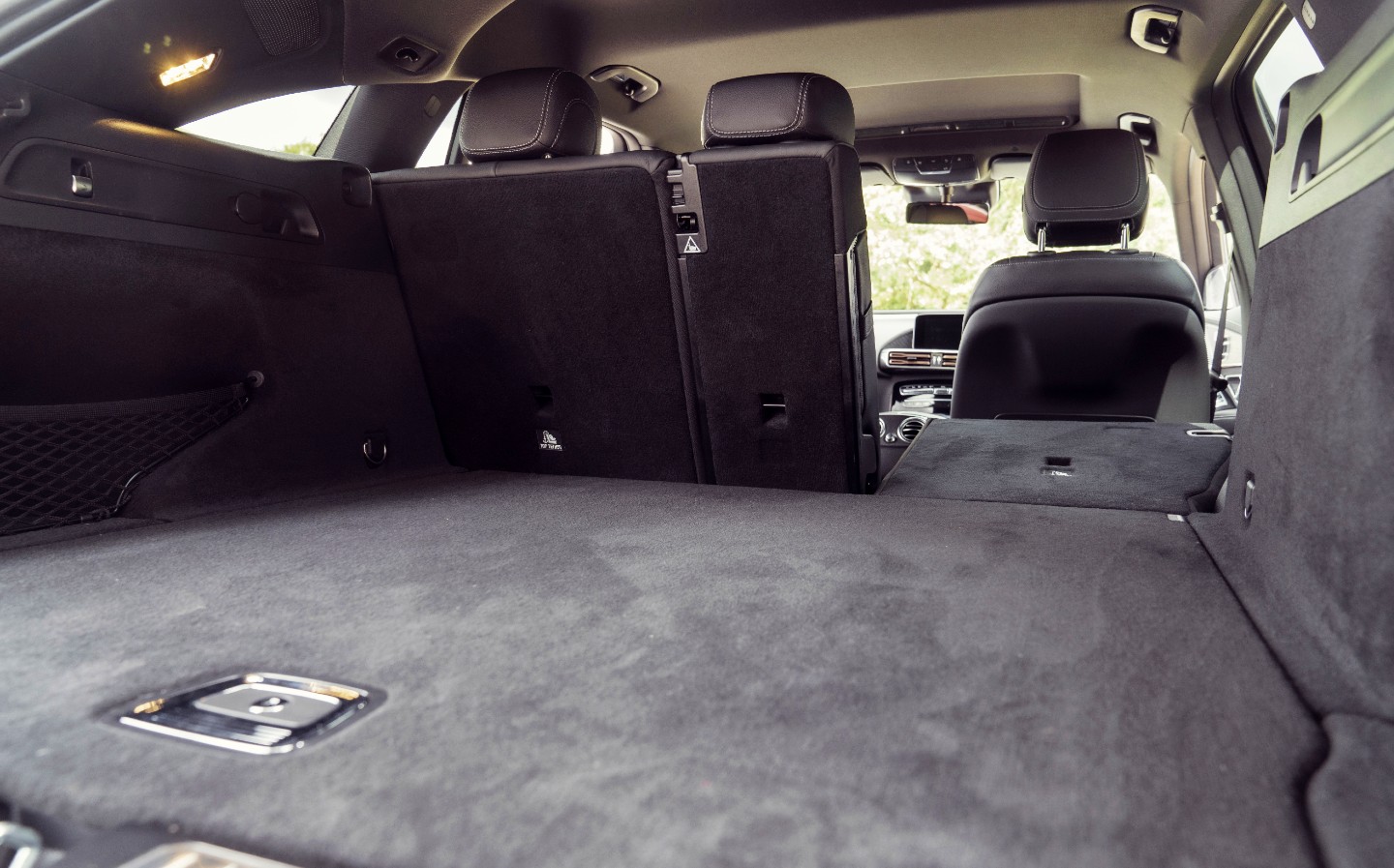 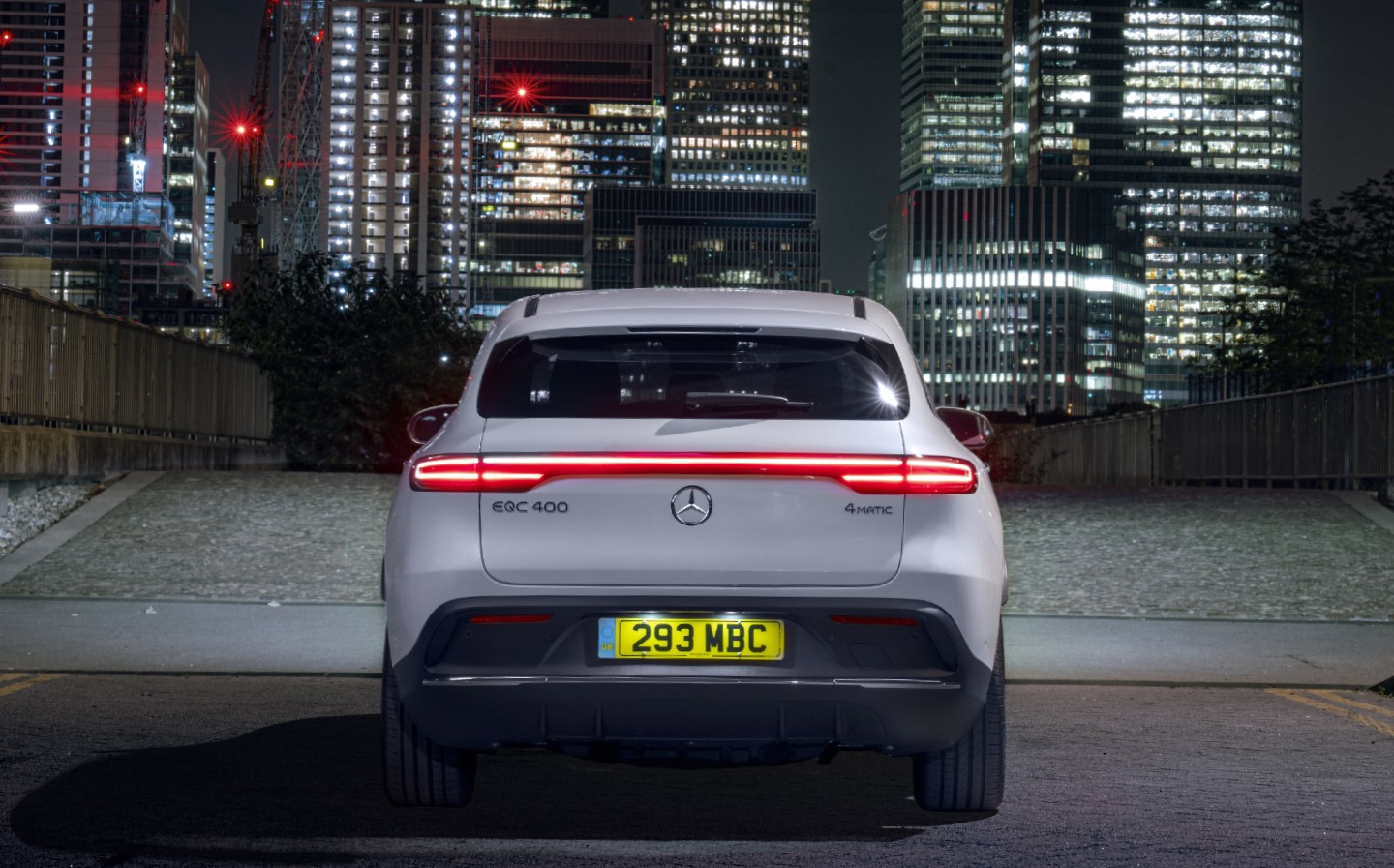 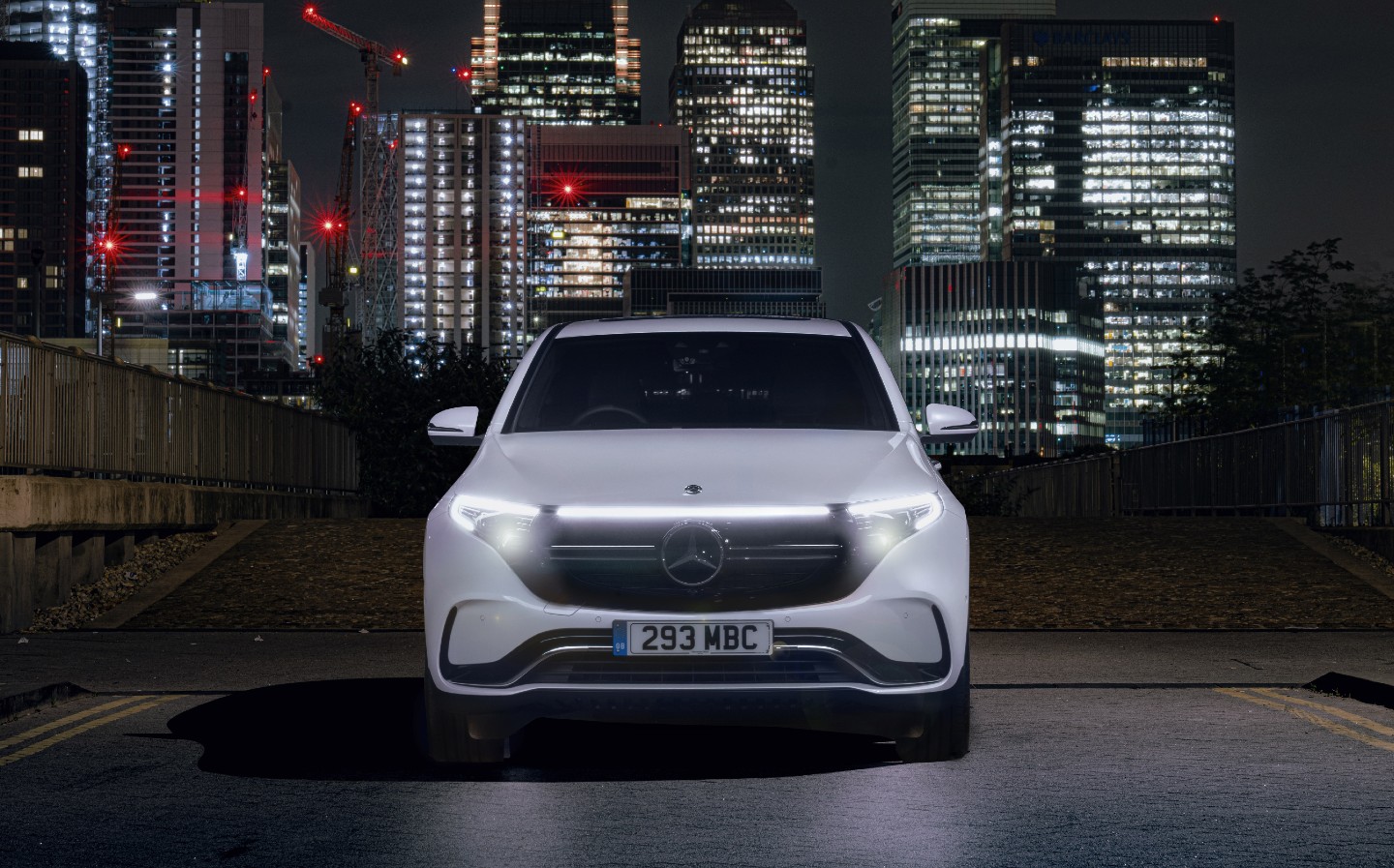 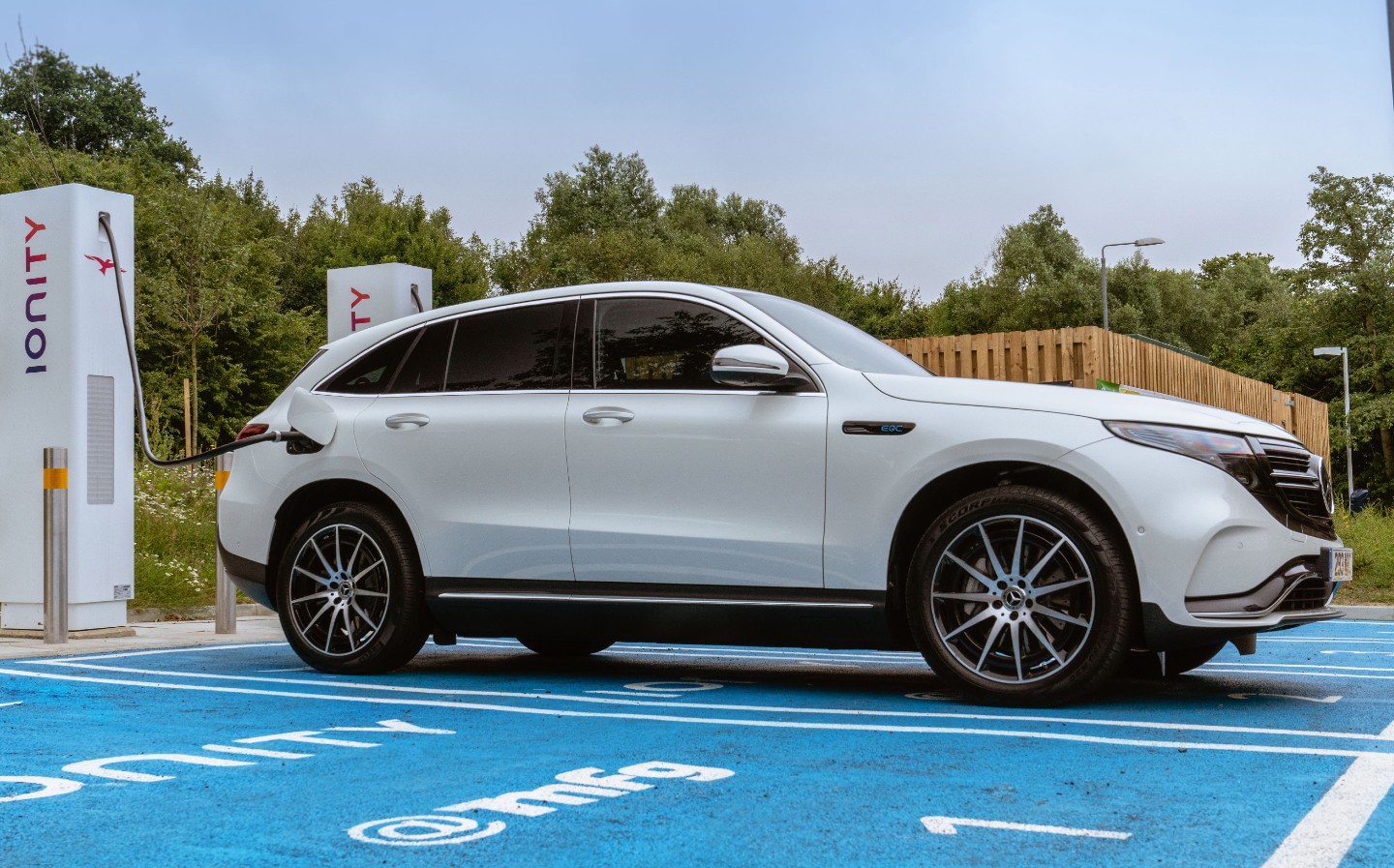 WHEN TESLA launched the Model X, it clearly wasn’t going to be long before the established premium car brands started introducing their own high-riding pure-electric SUVs. Jaguar reacted quickest with the I-Pace, in 2018, then came Audi’s e-tron and now we have Mercedes’ effort, the EQC.

The EQ part of the name is the standard nomenclature for Merc’s electric offerings, including plug-in hybrids and pure-electrics. The “C”, as you might have guessed, makes clear where the model fits in the Stuttgart company’s line-up — the sparky stablemate to the GLC, which is a mid-sized SUV.

EQC is one of 10 pure-electric models to come from parent company Daimler by 2022, and the first to wear the Mercedes-Benz badge. You can also now buy an electric V-class (EQV) and the company was due to launch the EQA — a shrunken EQC — this year, but that’s been pushed back to 2021. Also next year we should see an EQB and EQS (the big daddy of the range), with an EQE executive model scheduled for 2022.

Mercedes was smart to start with the EQC, as it’s the Goldilocks model — just the right size for most people. Sadly, the £65,720 starting price is probably a bit too hot for many, with a premium of more than £17,000 over the base GLC, which is largely down to the cost of producing the battery packs. Price parity with petrol models is still some way off, evidently.

You also get blistering performance — two electric motors, mounted to the front and rear axles, provide a total of 402bhp and 560 lb ft of torque, which is enough to blast it to 62mph in a shade over five seconds, which is only a fraction slower than the Jag, and the new dual motor Volvo XC40 Recharge P8, and a bit quicker than the Audi. Tesla has them all licked here, but remember the price.

What’s more, Teslas aren’t exactly known for build quality, which is something in which Mercedes excels. The EQC is no exception, and the panel gaps and bodywork shut lines are all as you’d expect from a premium car — wafer thin. The exterior design itself is decent for an SUV, though it looks like a GLC that’s been left out in the sun a little too long, with droopy eyes and a melty rear end.

Inside it’s as classy as you’d expect, with extremely comfortable perches and use of high end materials, with the two digital screens adding a high tech feel. Once you figure out the best way to navigate the plethora of menus and sub menus in the fully digital driver’s display and infotainment touchscreen, you find that they do work well, look attractive and the system doesn’t suffer from lag. It does take a while to get used to, though, and while it is a touchscreen, the touch-sensitive pad in the centre console makes it all a lot easier to find your way around.

The navigation system is really impressive and provides live updates, with charging locations marked and state of charge when you reach your destination shown, making it easier to judge onward travel and whether you need to plug in.

There are plenty of piano switches, though these are exclusively for the air conditioning system, suggesting Mercedes drivers are forever fiddling with the cabin temperature and fan speed.

The general layout of the cockpit is bit of a mixed bag – not as futuristic as some electric car offerings but the Mercedes familiarity will probably appeal to brand loyalists. It feels quite cocooning in the driver’s seat and isn’t as light and airy as some offerings, and the large A-pillar does hamper forward visibility. But there’s no denying it feels and looks like a quality bit of kit.

What’s more, there’s plenty of head and leg room in the front and back, though the rear door aperture is small, making entry and egress a little tricky. Boot space is excellent, though — plenty of room to throw the kids’ football kit back there.

The first thing you notice out on the road is its beautifully smooth ride — it’s very comfortable on the motorway, and quiet and refined, too, with a high perch giving a commanding view of the road.

You wouldn’t expect efficiency to be great on highways but even by electric car standards, the EQC isn’t a top performer in that regard – I achieved 2.4 miles per kWh over 20 miles at a steady 60mph on a speed-restricted M1, which isn’t great – motorways rinse the range of electric cars but even so I’d have hoped for over 3m/kWh.

But then you hit A and B roads, and the character of the thing comes into full focus. Stick it in Sport mode (Comfort, Eco, Max Range and Individual are also available) – and the EQC is eye-poppingly potent — it may be slower to 62mph on paper but from the driver’s seat it feels not far off a Tesla Model X in terms of pressed-to-your-seat performance.

The EQC has keen handling, too, confidently rounding corners at speed, and you can press on through country roads very swiftly indeed. There’s a slightly lighter feel to the wheel than on some competitors – the XC40 Recharge P8 and I-Pace, for example (I’d put the BMW iX3 in here, too, but I’m not allowed to talk about how that car feels to drive until early next month) — and the EQC’s two-and-a-half-ton bulk and pliant ride means it rolls a little more through corners and so feels a little less sporty mid-corner.

But the Merc pulls out of turns with real gusto, thanks to its dual-motors and instant power delivery. Weirdly, the Volvo feels the punchiest of the lot — but EQC is a close second.

My country road average economy in the EQC was actually less than 2 miles per kWh, but I was hammering it and really beginning to enjoy its pace and poise over undulating asphalt.

Officially, the range is 232-259 miles per charge, but drive it like that and of course that figure drops considerably. Then again, most people won’t be driving it anywhere like as far on a daily basis, and if you use it for cruising around towns and surburbia, you should easily be able to achieve that combined rating. The EQC’s official range is actually on a par with the e-tron’s, despite it having an 80kWh battery versus the Audi’s 95kWh pack.

Efficiency is hampered mainly by its bulk, but by the same token that weight, and suspension set-up, help it glides over potholes and iron out imperfections like few other cars. And fortunately it’s capable of rapid charging – 10-80% battery can be achieved in 40 minutes using a 110kw DC charging point, which is probably enough to complete most further-afield trips with a coffee stop en route.

In the end it’s best not to think of the EQC as the most efficient EV out there. What it is is a refined, comfortable, solid and rapid – all the things a Mercedes should be. It’s surprisingly nimble for a lump of metal that weighs two and a half tons, too – perhaps not as rewarding to drive as an I-Pace, but close. The price may be another sticking point, but remember — this is a Mercedes, not an MG. Loyal customers expect a quality, well-engineered bit of kit, and on that front it doesn’t disappoint.