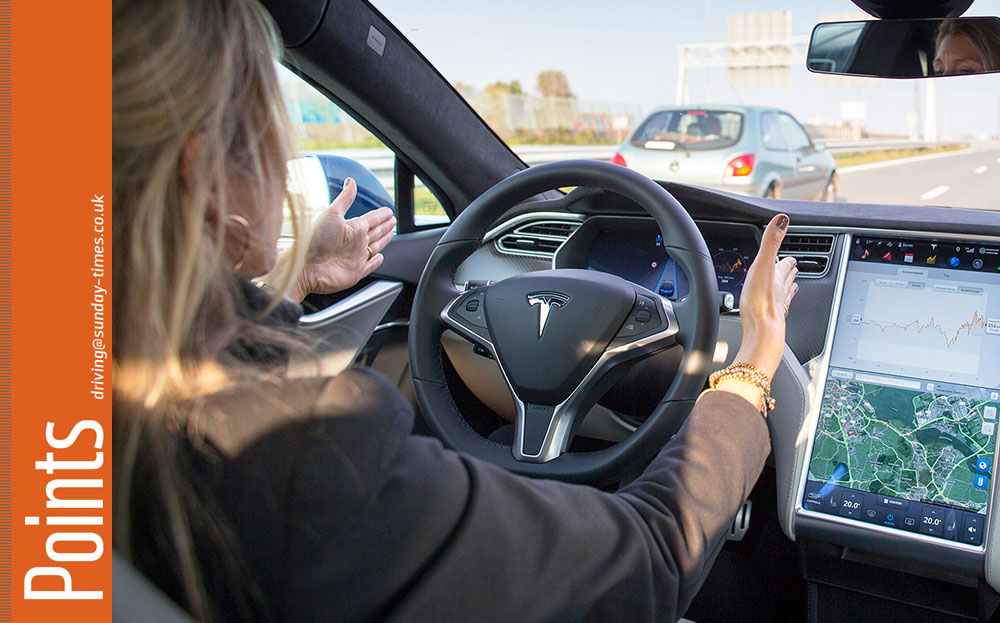 Without trying hard you found problems with Autopilot on the Tesla (“Switch to autopilot: at the wheel of a self-driving Tesla Model S”, last week). Airbus software is subjected to repeated, intensive testing and still errors are found — and pilots are used. The car industry and testing regulators are sleepwalking into a much bigger crisis than VW. The Department for Transport needs to do more than draw up legislation; it needs to convince itself these cars are safe. It should start by talking to the airline industry.

Driverless systems may have been tested to deal with smooth-flowing motorway traffic in good weather with clear lane markings, perfect lane discipline by other drivers and no roadworks or lane closures. However, I question whether they can take appropriate split-second action in the many hazardous situations that occur.

Harry Barker conveniently ignores the fact that cyclists, pedestrians and horses are on the road by right (“Licence to misbehave”, Points, last week), whereas motorists are there only by licence.

The DVLA’s web developer must have been an IT student on work placement (“DVLA’s double tax”, Points, last week). Just try to renew your tax if you have only the V5C document for a vehicle you’ve owned for years but not the V11 reminder letter or a Sorn, or if you are not a new keeper (V5C/2) or have not received a “last chance” letter. Chocolate, teapot, useful.

It’s easy to make it impossible to “forget” to pay. When this system was introduced last year and my tax became due, I set up a direct debit with the DVLA for me and my partner so the payment is taken from our accounts every month.

Last week my grandson, having just passed his test, bought a car at an auction. He wanted to drive it home and so needed to tax it. He rang me at home and in less than five minutes it was taxed. The DVLA has a good website.

Dave Craggs is not thinking clearly (“Test the over-70s”, Points, last week). I personally know many 70 and 80-year-olds who are much fitter, stronger and brighter than many of today’s 30-year-olds. The only thing that should affect a person’s driving licence is their medical condition.

I am in partial agreement with Dave Craggs. However, I suggest the test be carried out every year. It could be called the MOT — “Monitoring Old Timers” — test.

David Pearson says his flight from Spain used enough fuel to power a car for 75,000 miles (“Sky’s the limit”, Points, last week). But the fuel used should be divided by the number of passengers. If there were 200, each would have used about 375 miles worth of fuel. Not bad compared with the 1,250-mile journey.

Ultra-bright high-intensity discharge (HID) bulbs were developed as safety features (“Hard on the eye”, Points, last week) but car makers have idiotically decided to use them as garish “design features”, allowing a vehicle’s make to be recognised from afar by the headlight pattern. The result of this is that each evening, motorists have stamped on their retinas the white-hot glare of HIDs (not to mention the brightness of the large number of fog lights that seem to be permanently switched on).

What has happened to car names? When I was a child, it was always the ones with exotic names such as Diablo, Stingray, Zagato and even Mustang that fired our imaginations and made us yearn to be old (and rich) enough to own one. Will today’s children really have their attention grabbed by the 570S from McLaren or its 675LT for that matter?

Please, McLaren, call the next one something evocative. A McLaren StarFighter would be remembered for years to come, but who will recall the MP4-12C?

I am not directly affected by the VW emissions scandal but I am affected by its submission of false figures, as the cars are subject to tax rates lower than they deserve. To make up for the shortfall, the DVLA has imposed higher charges on the rest of us.

How about a 20mph statutory speed limit on roundabouts to give everyone a chance to join the flow of traffic, reducing the queues on minor roads of cars prevented from entering by the excessive speed of traffic on the main route?

I too remember air-compressed wipers (“Wiped out”, Points, last week). Driving from technical college in Peterborough to Stamford in a Ford Anglia (my first car) on a dark, snowy evening, I had to stay at 30mph on the A47 to keep my wipers going and prevent a build-up of snow on the screen. Happy days.

I wrote to The Times 15 years ago on this subject. I am 93 and have been a Times reader all my adult life. My letter described the idiosyncrasies of the Ford Anglia of the postwar period, the cheapest car available at the time.