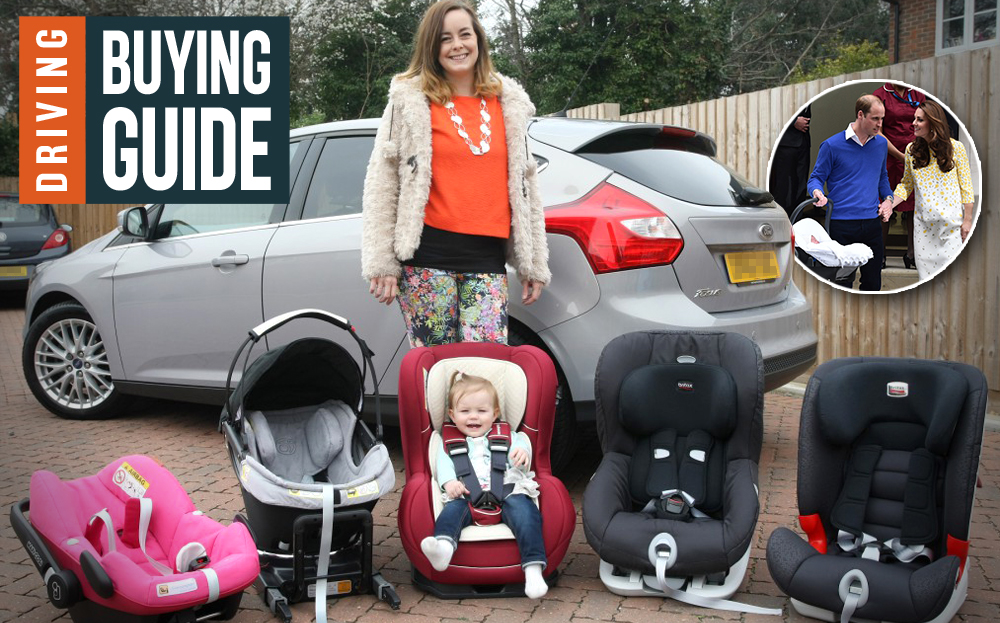 TWO out of two,” a beaming Prince William told the throng of reporters after successfully strapping in the baby seat carrying Princess Charlotte earlier this month. The prince had repeated a trick he first pulled off two years ago when he strapped in George, his firstborn, without sustaining a back injury or bumping the royal baby’s head on the doorframe. It was enough to earn the respect of dads the world over.

But did William cheat? The seat used for his newborn daughter was a Britax Baby-Safe carrier that clips into a separate Isofix base that stays plugged into points in the car. Unlike older and cheaper systems, Isofix (see Seat sense, below)eliminates the need to wrestle with seatbelts to make the seat secure.

And even if you are the practical type who quickly gets to grips with such challenges, there are other issues to deal with. Do you go for a forward-facing or rear-facing seat, and up to what age? Should you opt for a swivel seat or fixed? Do you buy a model that can clip onto a pram chassis, or does that just add to the hassle?

It doesn’t end with selecting the right baby seat either. Just months after you’ve completed your exhaustive research and chosen the ideal carrier, growing legs and arms threaten to spill out of the seat and it’s time to move on to the next stage up. And of course the technology changes rapidly — though this is no bad thing — and the market is full of the innovative, the stylish and the sturdy basics.

What does the law say about carrying children in cars?

All children in the UK must travel in the appropriate car seat or booster seat from birth until they are 12 years old or weigh 36kg or are 135cm tall (4ft 5in), and children up to 9kg must travel in rear-facing seats.

Which size of car seat do I need?

Isofix is an anchoring system found in all new cars. Baby seats can be clicked in and out of a separate Isofix base, which clamps to two brackets welded to the car’s chassis. Seats for older children attach directly to the brackets. The system makes the seat more secure and easier to install correctly.

Do I want a front or rear-facing child seat?

Children in the UK are allowed to travel in forward-facing car seats from 9kg or nine months old, but a growing body of evidence suggests it is safer for them to remain rear-facing until the age of four. A report for Volvo last year suggested that under-fours were at five times more risk of death or serious injury in forward-facing seats. A 2013 EU safety standard, i-Size, stipulates that new car seats should keep children facing to the rear until at least 15 months to offer better head and neck support. For the time being, this standard will run in tandem with older regulations.

Maxi-Cosi Pebble Plus and 2wayFix base 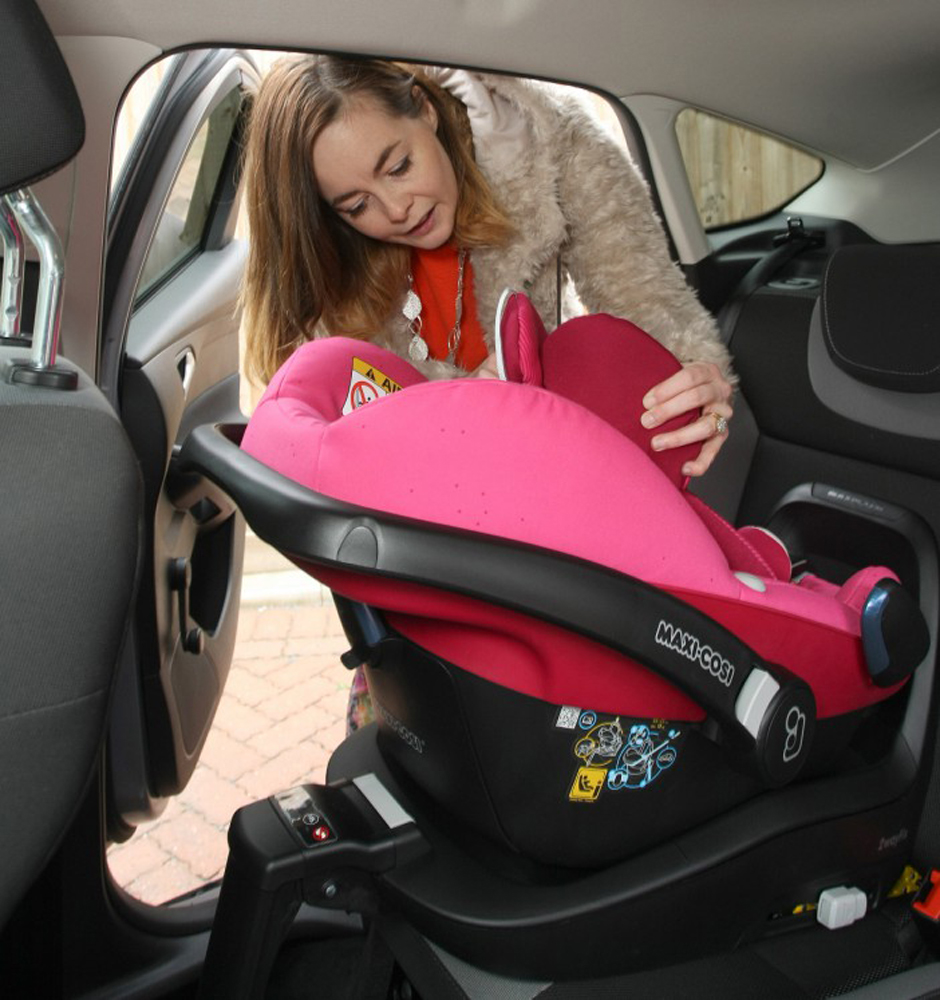 Wrangling child seats into and out of cars is one job that new parents, already laden down with baby-related luggage, could do without. Invest in a snuggly, stylish Maxi-Cosi Pebble Plus and the corresponding 2wayFix Isofix base unit and you could save yourself a lot of hassle in the long run.

The Isofix base not only improves safety but also enables easy transfer of a seat containing a snoozing baby into the house or onto a pram chassis. The 2wayFix base is designed to work with the rear-facing Pebble Plus, which has a three-point harness, as well as the rear and forward-facing group 1 (see Seat sense, below) 2wayPearl when it’s time to upsize.

The Pearl can be rear-facing until the child reaches four and complies with the 2013 EU i-Size safety standard, which bases the suitability of seats on height rather than weight and is now the preferred option of many families (see Seat sense, below).

Nervous parents will be reassured by the 2wayFix, which beeps and lights up when the seat is in place. This is well-thought-through kit in a range of colours and patterns. As with all rear-facers, though, your front passenger will probably need to shift their seat forward a touch, plus the seat can be a struggle to carry once babies start getting heavy. But the Pebble Plus will fit neatly into your life. 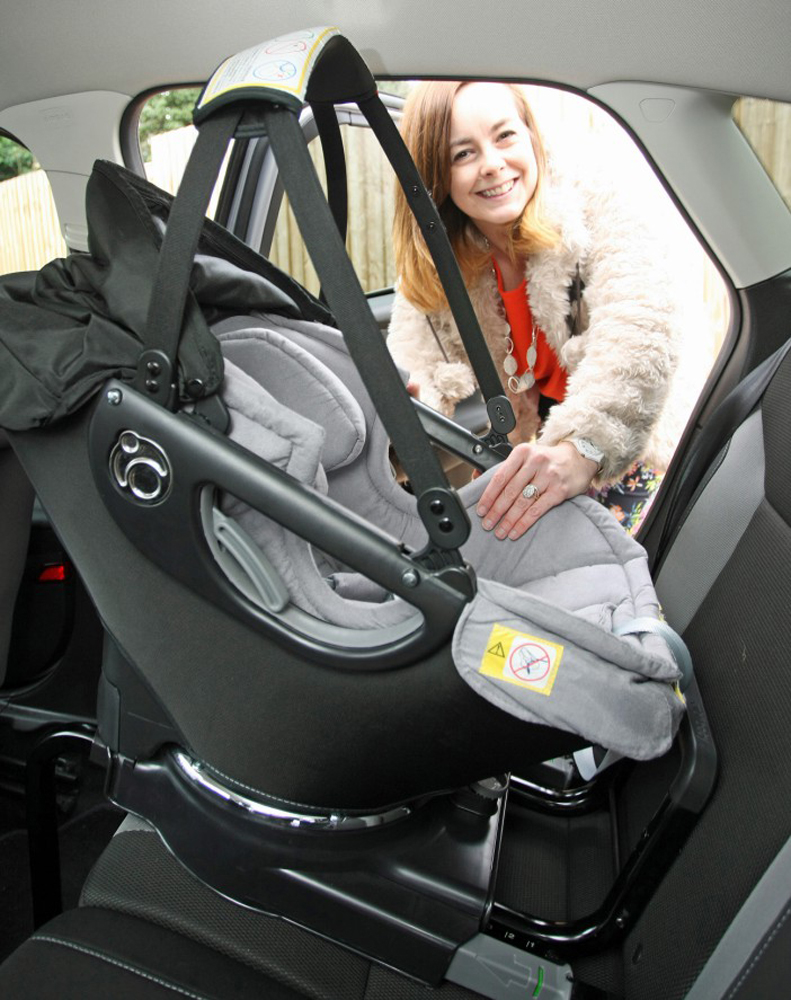 This is a celebrity favourite, used by A-listers such as Beyoncé and Kim Kardashian. One of its supposed attractions is that it can be converted into a pram with a “stroller frame”. This may sound great but in reality such systems are expensive and cumbersome: it’s a blessed relief to get babies into lighter, more nimble buggies when they are old enough.

On the plus side, the generous sunshade is a magnificent idea. The seat even has an extendable “paparazzi shield” for complete privacy; you may not be famous, but it’s very handy for allowing naps to continue as long as possible.

The fabrics are soft, washable, eco-friendly and tastefully coloured, and the seat swivels in its Isofix base, meaning you can tighten baby’s five-point harness easily before clunking the seat into the rear-facing position required by law for infants up to 9kg. There’s a toddler seat that works with the same Isofix base when you’re ready to move up a stage. Brilliantly — unlike most rivals — the G3 has a soft fabric handle and is easy to carry: there are no hard plastic lumps smacking into your leg while you struggle up the garden path. It’s best for larger cars, though. 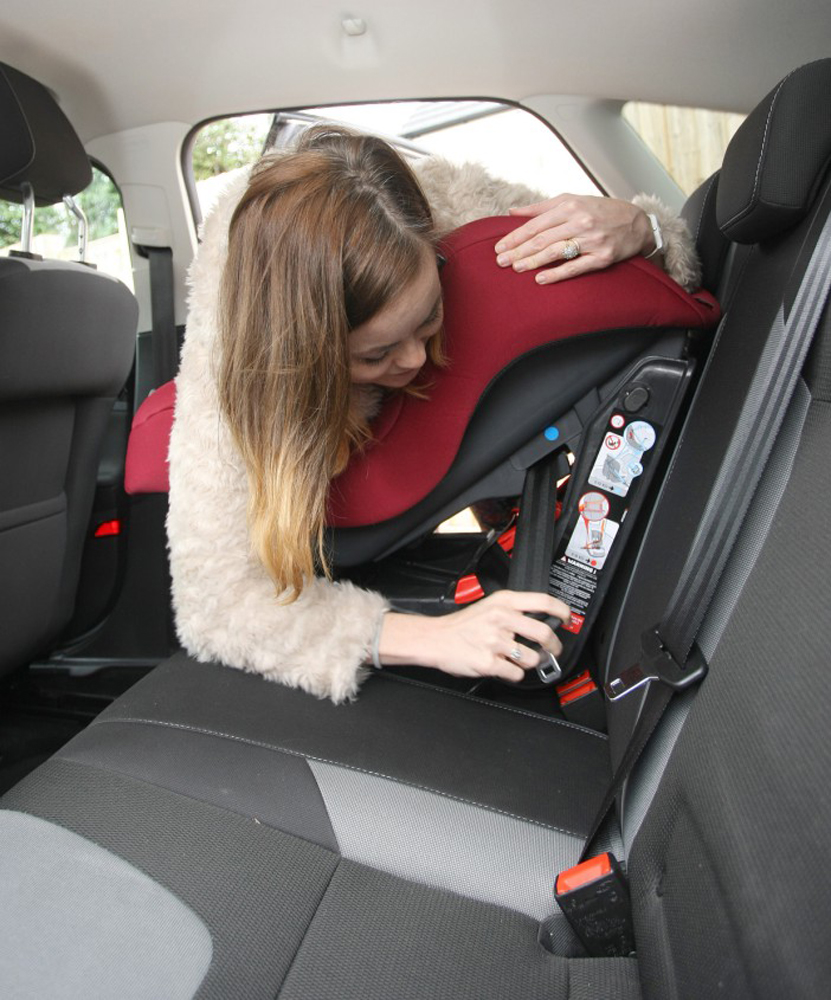 Mothercare’s sensibly priced, functional products are a godsend to parents on a tight budget. The Madrid, which has a five-point harness, is suitable from birth all the way up to around the age of four, rear-facing until about nine months and forward-facing afterwards. It may be one of the cheapest on the market but it ain’t ugly; while the Madrid is not made from luxury materials, it’s handsome enough and available in burgundy and cream or black and cream.

The retail price is £79.99 — which works out at £20 a year if it’s kept in play until your child’s fourth birthday — but keep an eye on the company website because the seat often crops up in sales.

It doesn’t have Isofix and instead is secured by a seatbelt. What’s more, this is not a seat that you’ll want to be lugging backwards and forwards to the house as there’s no carry-handle — a bit of a disadvantage if your newborn, like most, nods off in the car, but a compromise worth making for the price.

It’s also a great option as an extra seat for Granny’s car, as long as she’s not planning on taking it out of the car very often as the seatbelt setup is a bit of a faff. 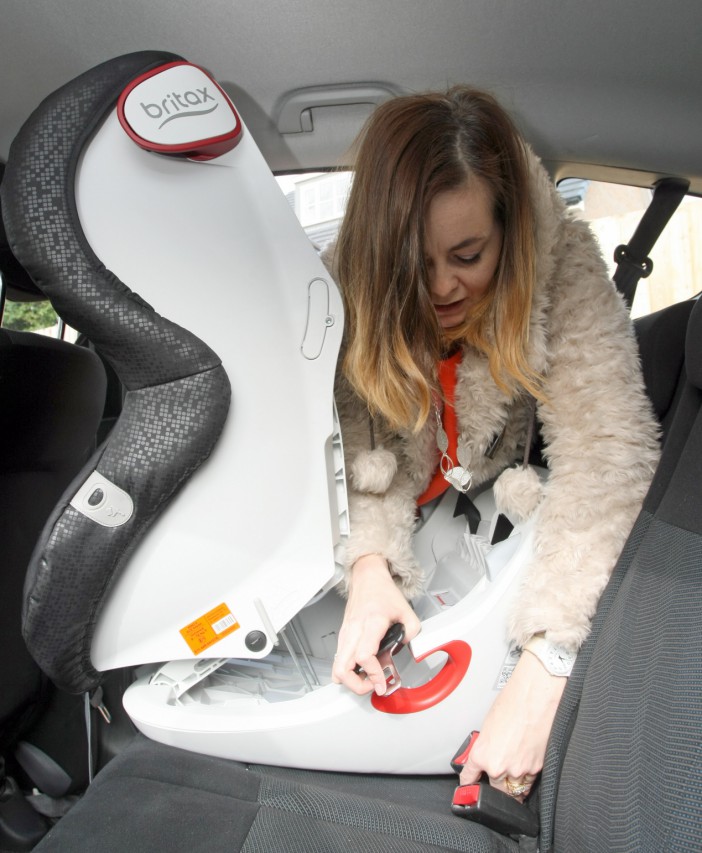 The King II ATS is one of Britax’s top seats — and possibly the one Prince William will upgrade to at some point. There’s no yanking at straps here and crossing fingers that you’ve got it right: the clever Active Tensioning System tells you when the one-pull, five-point harness is at optimum tension for each individual child. And should the tension change during the journey, it will let you know with beeps and flashes.

It’s a forward-facer, secured by seatbelts rather than Isofix, and the seat tilts forward to assist with easy installation. If you’re hoping for a little peace and quiet on the road, the King II ATS has four reclining positions that can be adjusted without disturbing nap-time. Another clever feature is the height-adjustable headrest and harness, which means there’s no need to unbuckle the seat from the car, take it out and fiddle about at the back whenever the straps need to go up a notch. 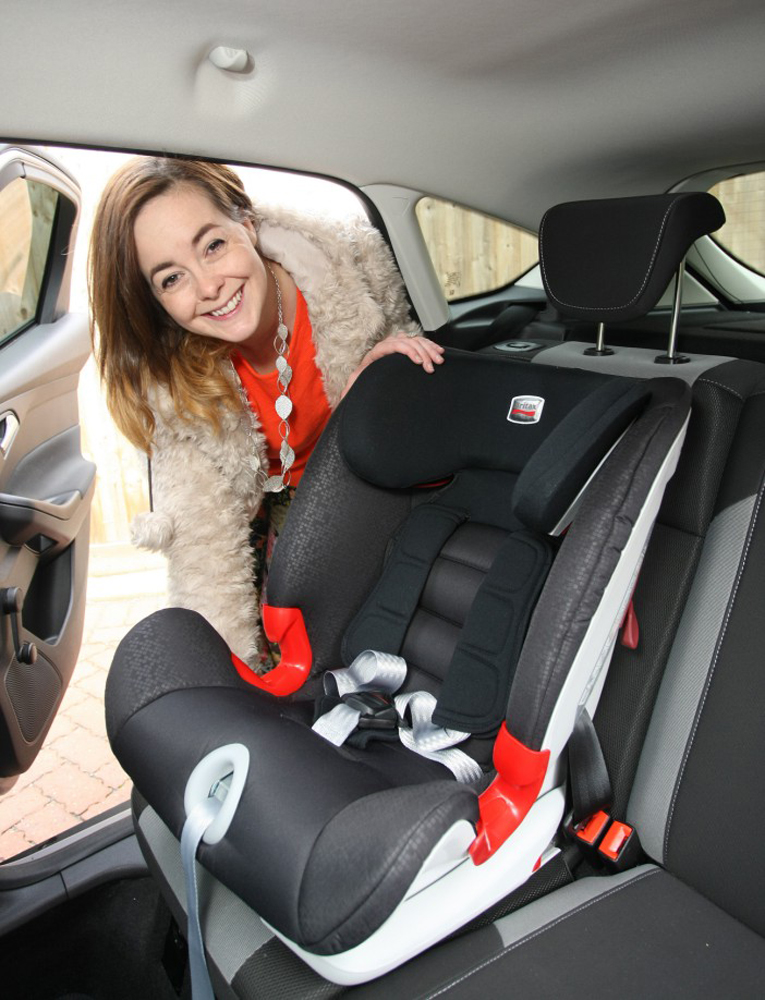 It’s unlikely that new parents will be able to wrap their heads around the idea of their baby sleeping through the night, let alone starting secondary school. But it is a legal obligation in the UK for children to use a car or booster seat until they weigh 36kg or reach 12 years old or are 135cm (4ft 5in) tall. The forward-facing Britax Advansafix offers amazing longevity and is suitable from around nine months to 12 years.

Its star feature and the secret to its long lifespan is a rock-solid installation system: Isofix, seatbelt fittings and a top tether that all reduce movement.

The adjustable headrest is designed to keep up with growth spurts, the seat reclines to accommodate naps and the padded five-point harness keeps children firmly and comfortably in place until they’re more than a little bit gangly, giving parents extra piece of mind.

While it looks a bit of a chunky monkey compared with the diddy infant seats, it really isn’t that much larger than a group 1 model and should fit in even small vehicles. Given that the seat is suitable for children up to group 3 size, this is pretty impressive.

Plus, while persuading an 11-year-old to use a car seat may be tricky, the Advansafix looks good, being deliberately designed to echo a racing driver’s bucket seat.

It is available in red-and-black Chili Pepper or the thrilling-sounding Black Thunder.