THE DRIVER of a pickup truck was taken away in handcuffs after losing control of the vehicle, mounting the central reservation and knocking over two lamp posts before coming to a stop.

The incident took place on Interstate 43, near Hampton, Milwaukee, earlier this month. Despite the dramatic crash and metal poles being toppled onto a busy highway, nobody was injured.

According to ABC News, the driver was arrested after he was given a sobriety test. 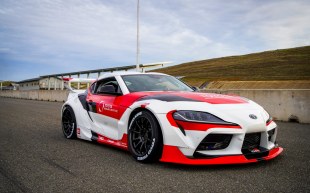