OVER the past couple of decades, the family car has been on an adventure. First it packed a rucksack, pulled on a pair of hiking boots, zipped up its waterproofs and headed for the hills in the guise of a tough 4×4.

Then it shed some of its harder-core attributes and tried life as a “soft-roader” or sports utility vehicle (SUV). These cars, either two- or four-wheel drive, were designed for hitting the beach with a wetsuit and paddleboard rather than climbing mountains, and made as big a splash with young families as did, say,  Instagram or TV baking shows.

More recently, the adventure has been closer to home. The crossover utility vehicle (CUV) retains the 4×4 spirit but in a more svelte package, sitting somewhere between the family hatchback and the SUV. High riding but compact enough for cities and suburbia, it is as at home on the school run as picking up the freshest of ingredients from a farmers’ market.

The XCeed is Kia’s newest take on the CUV. Baby brother to the enduringly popular Sportage, the XCeed has been designed to appeal to people who drive a Volkswagen Golf, a Nissan Qashqai and everything in between, and even those keen on ultra-green motoring (a plug-in hybrid XCeed is due next year).

The appealing looks of the Xceed are immediately obvious. The South Korean car company’s design team was led by Peter Schreyer, father of the Audi TT, and is now headed by Luc Donckerwolke, whose credits include the Lamborghini Gallardo. They have steered Kia toward a distinctive design identity, creating cars that look interesting and stand out from the crowd.

The XCeed, which joins the Ceed hatchback, Ceed SW estate and ProCeed in the Ceed family of cars, is a good example of that. It has a sporty, coupé-like sloping rear window yet stands higher than a typical family hatchback, with more ground clearance.

A striking face stares back at you, glinting with slashes of aluminium-effect trim and a distinctive honeycomb-finish behind the dual-blade grille and Z-angled, LED headlights. Yet with roof rails as standard, it’s practical too, ready for cycle racks and roof boxes.

Kia’s designers have gone to town with the XCeed’s interior, with standout features being the honeycomb-style stitching for the seats, stitched door inserts, aluminium-effect flourishes and finishing for the dashboard that mirrors the car’s paintwork.

There’s plenty of space inside, with rear seats featuring Isofix anchorage points for child seats and the front passenger seat complemented by a switchable airbag. And the boot can carry a generous 426 litres of luggage: the XCeed is longer than the Ceed hatchback.

The level of technology should impress even the most modern of families. At the heart of the XCeed is a high-definition touchscreen display which, for the 3 and First Edition trim levels, measures an impressive 10.25in and comes with navigation and TomTom Live connected services. That means you’ll know about the traffic conditions ahead of any journey and can search points of interest at your destination or along the way.

With the help of the UVO app you can set your destination on your phone and send it to the XCeed, so it’s programmed before you get in the car.

Every model comes with Apple CarPlay and Android Auto, both featuring voice control, and the Bluetooth system allows two devices to be connected at once so you can make a hands-free call via one phone while a passenger streams music or podcasts from the other device.

Those who choose the top spec First Edition trim level will enjoy the crisp JBL Premium Sound System. The upgrade also brings other perks, including a 12.3in fully digital Supervision driver instrument display, reversing camera and a self-parking system.

Kia’s generous equipment levels continue with an extensive list of safety features as standard; reassuring, given its role as a family car. Kia fits every XCeed with lane-keeping assistance, hill-start assistance, driver attention warnings, a tyre pressure monitoring system and forward-collision warnings with automatic emergency braking. Upgraded cars can help avoid impacts with pedestrians and cyclists, as well as other cars.

Versions of the First Edition fitted with an automatic gearbox get the benefit of adaptive cruise control, which not only adjusts the XCeed’s speed according to traffic conditions, but can bring the car to a halt and pull away again – a useful feature in traffic.

Drivers are offered a choice of three engines, 1.0-litre and 1.4-litre turbocharged petrol motors, and a 1.6-litre turbodiesel with two power outputs.

The 1-litre offers 118bhp, and can return up to 45.6mpg on the combined fuel cycle, according to WLTP testing and depending on the version. Step up to the 1.4-litre unit, which is expected to be the most popular, and the XCeed has 138bhp and the ability to return up to 42.8mpg.

Drivers who prefer diesel are offered a 1.6-litre unit in either 114bhp or 134bhp specification. The former achieves 52.3mpg, the latter 53.3mpg. A seven-speed automatic gearbox is optional.

Kia has fine-tuned the independent suspension and steering to give the XCeed a slightly sportier feel than the Ceed hatchback, and reviews suggest it has been successful.

With the brand’s signature seven-year warranty behind the XCeed, the latest evolution of the family car looks set to continue the popularity that Kia has enjoyed with its 4×4 and SUV forerunners. 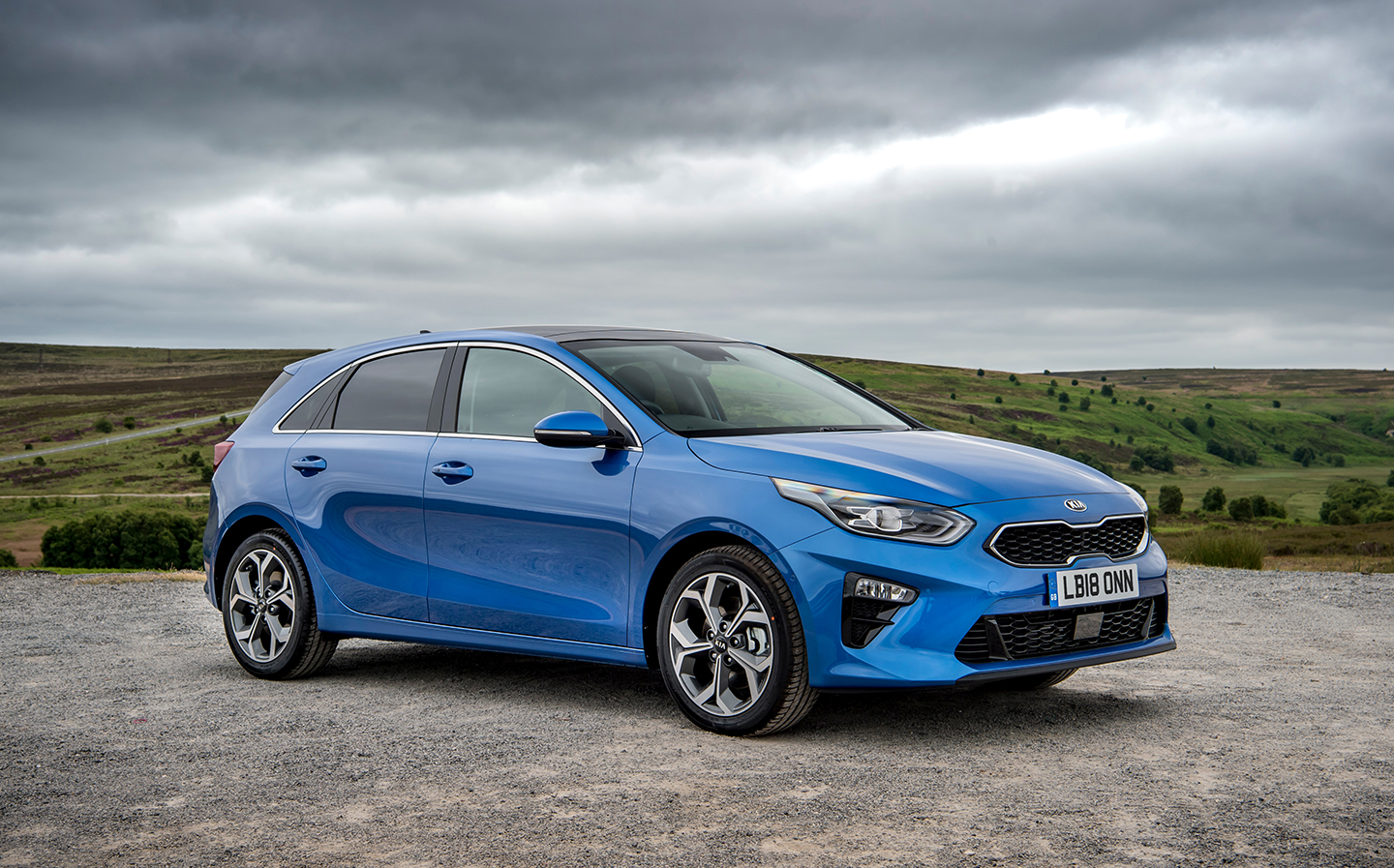 At the heart of the range is the Ceed hatchback, which competes with cars including the Ford Focus, Mercedes-Benz A-class and Volkswagen Golf. 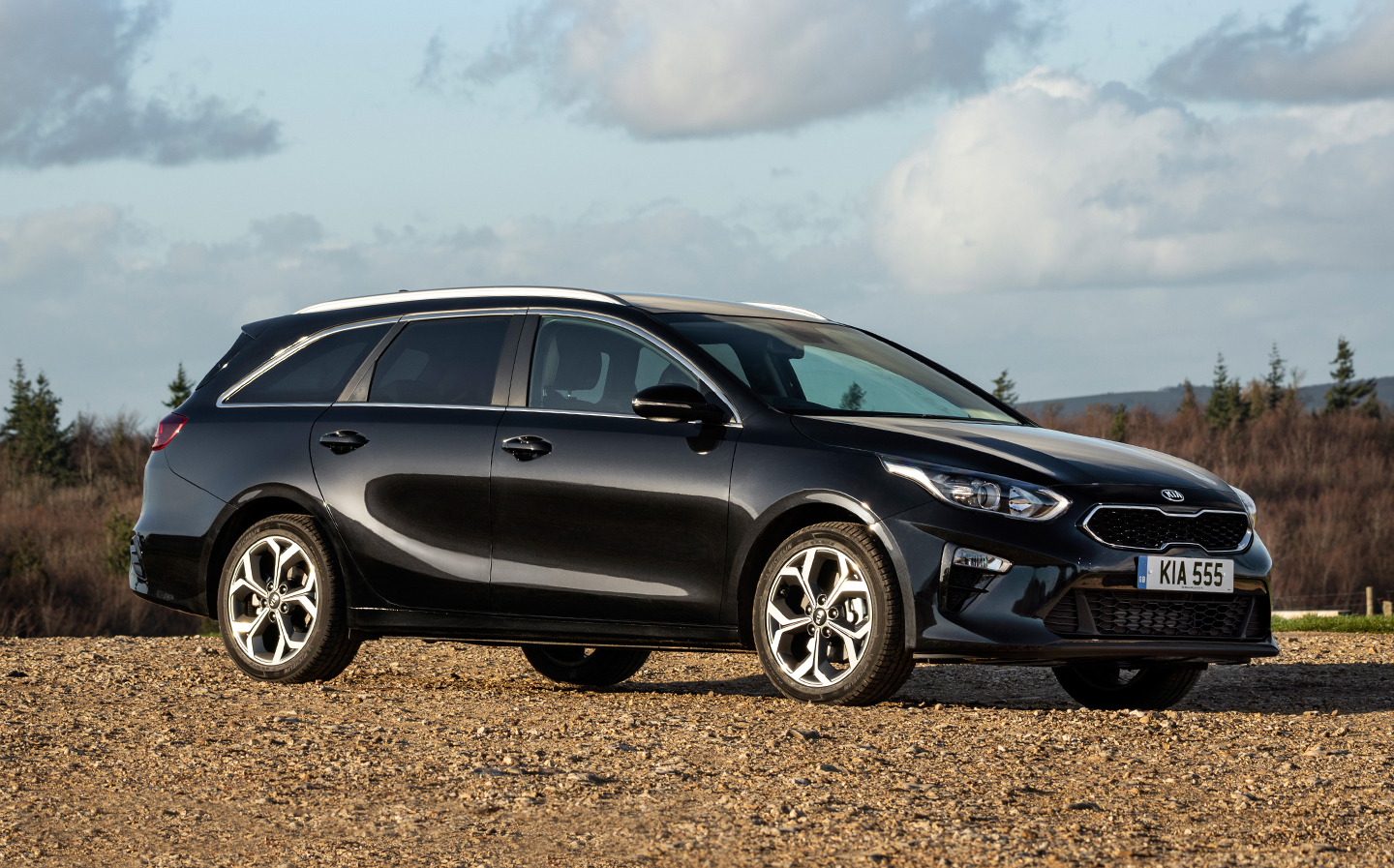 Those who want more space can opt for the Ceed Sportswagon, the estate version of the family hatch. 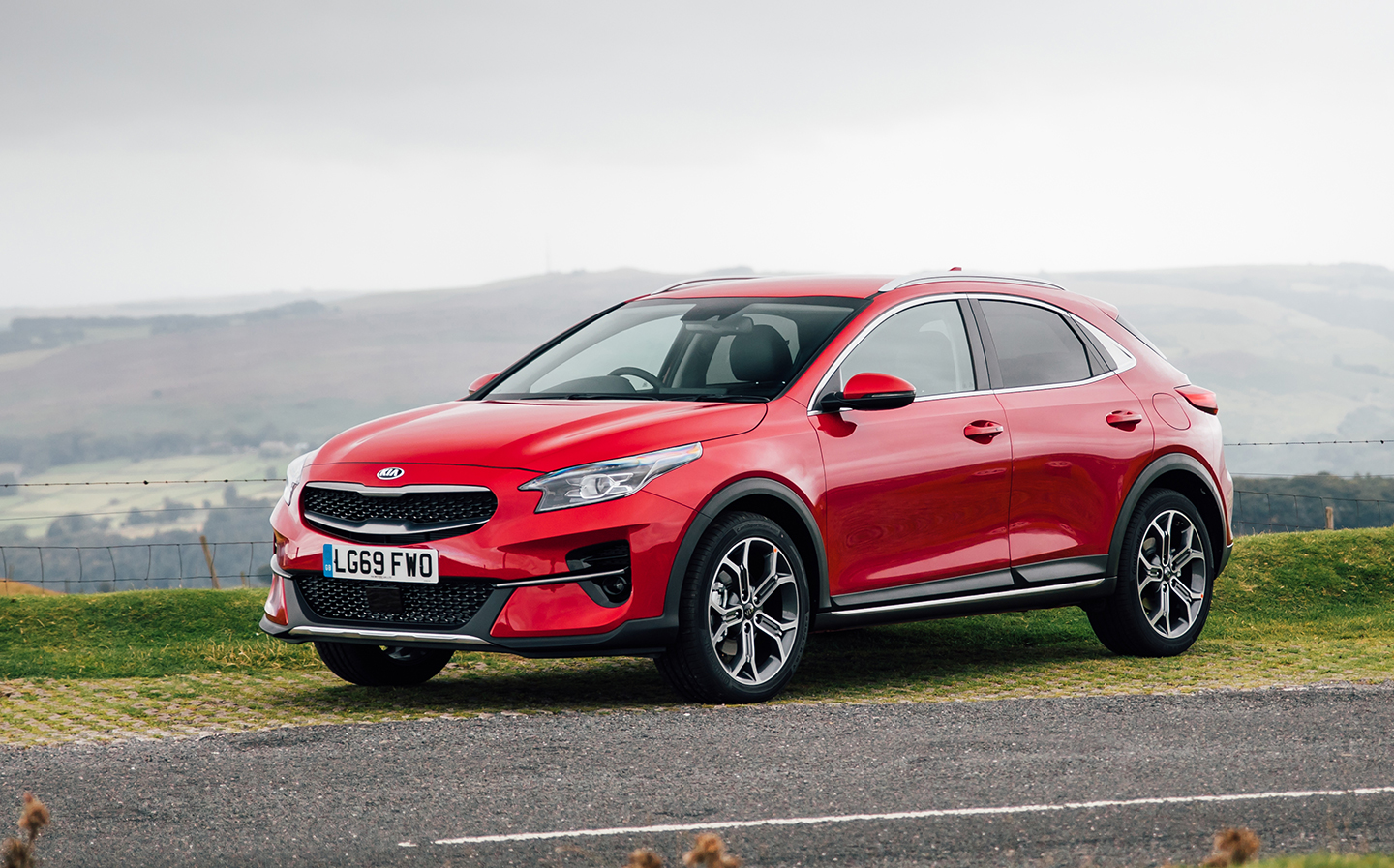 New to the range is the XCeed, the crossover utility vehicle that brings even more style and muscular good looks to the Ceed range. 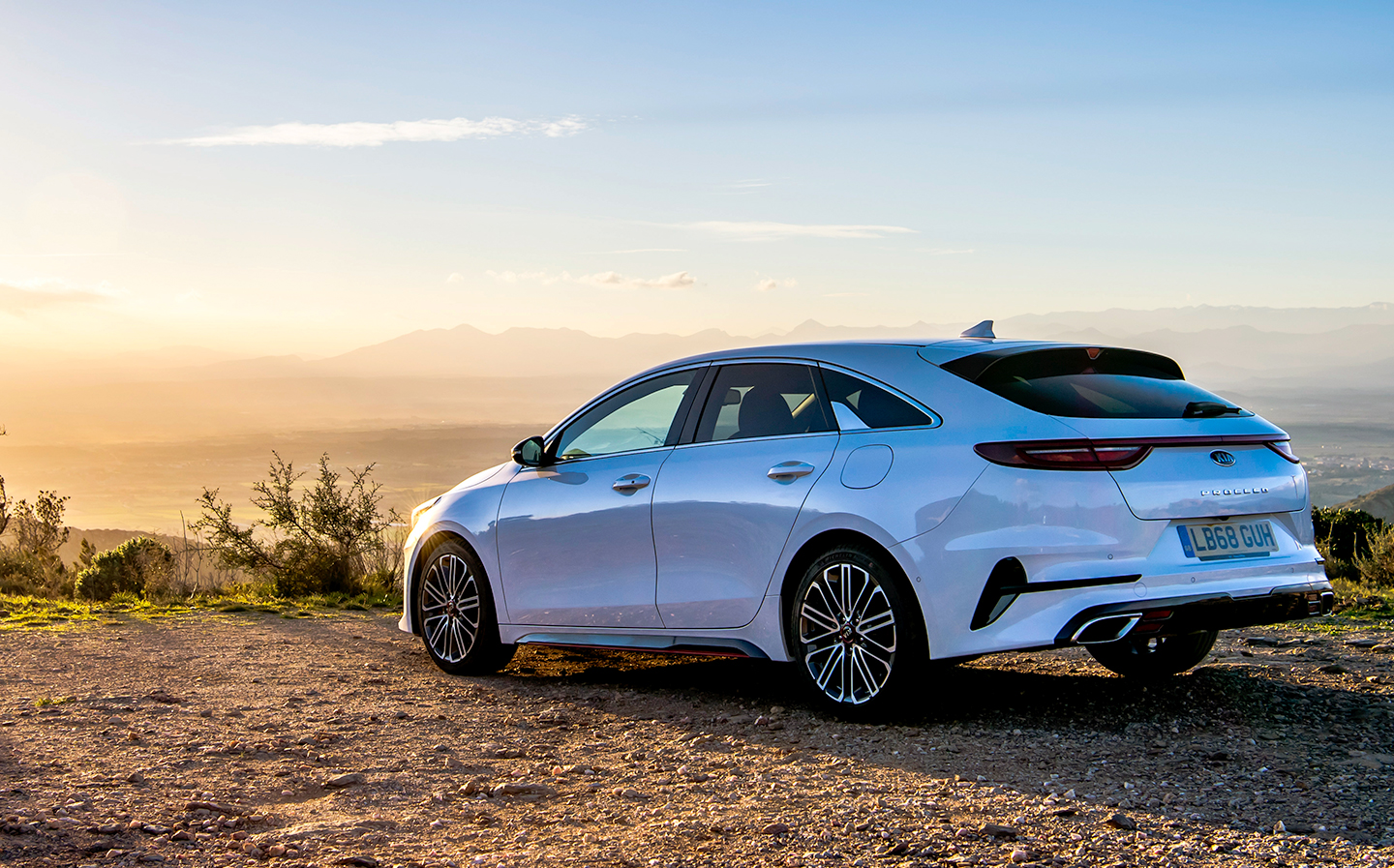 The ProCeed “shooting brake” sacrifices only a little space over the Sportswagon in favour of a lower, sleeker design, extra luxuries and sportier driving characteristics.