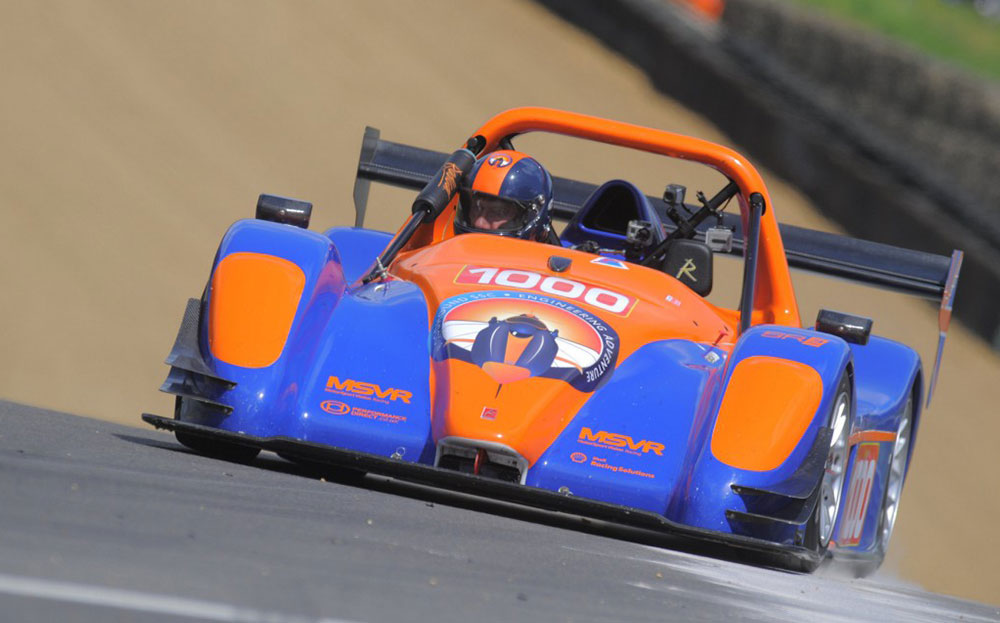 MY DAY job is flying jet fighters in the RAF. I’ve also spent the past 10 years running one of the RAF’s 49 sports associations, teaching people to ride the Cresta Run in Switzerland — the world’s steepest and most challenging ice run.

As team captain my job is to convince nervous beginners they can do it, to get them to swallow their own fear, to trust what I am saying, to trust in themselves and to launch down the run in the knowledge that if they do it right, they’ll be fine.

If you can achieve that level of trust and confidence with individuals in peacetime, then you can achieve it when they are getting off a Hercules aircraft at three o’clock in the morning in some remote part of the world, probably worrying about someone shooting at them. They can be confident that somebody will look after them, they can trust what they are told and they know that they can cope — that they’ve been trained for it.

It’s the sort of confidence that you arrive at only through careful preparation. So it is for me with Bloodhound SSC as we attempt to set a new world land speed of 1,000mph (I set the current record of 763.035mph in 1997). As a fighter pilot I’ve had some of the best training in the world, but I still need my own preparation time before I try to drive faster than a bullet from a gun.

I will be in the driver’s seat when we begin the speed record runs next summer. I’m not saying I won’t be scared — fear is a good thing, a motivator — but I need to control that fear and to focus on driving the car as accurately as possible. At least I will know every detail has been exhaustively analysed and that no stone has been left unturned — literally. Our friends in South Africa have lifted more than 15,800 tons of rocks by hand from 200m sq ft of the Hakskeen Pan, in the Northern Cape, to give us perhaps the finest track ever created for a land-speed record attempt.

Driving a seven-ton hybrid jet-rocket car at 1,000mph in a straight line — or as near as I can get to one — is something so far removed from everyday experience that people are surprised to learn that I practise by racing a lightweight Radical SR3 RSX on tight and twisty tracks. The Radical weighs only 570kg empty and accelerates in a straight line from 0 to 60mph in 3.1 seconds, but it’s by trying to push it to the limits of its cornering ability that I’m sharpening my instincts for Bloodhound. 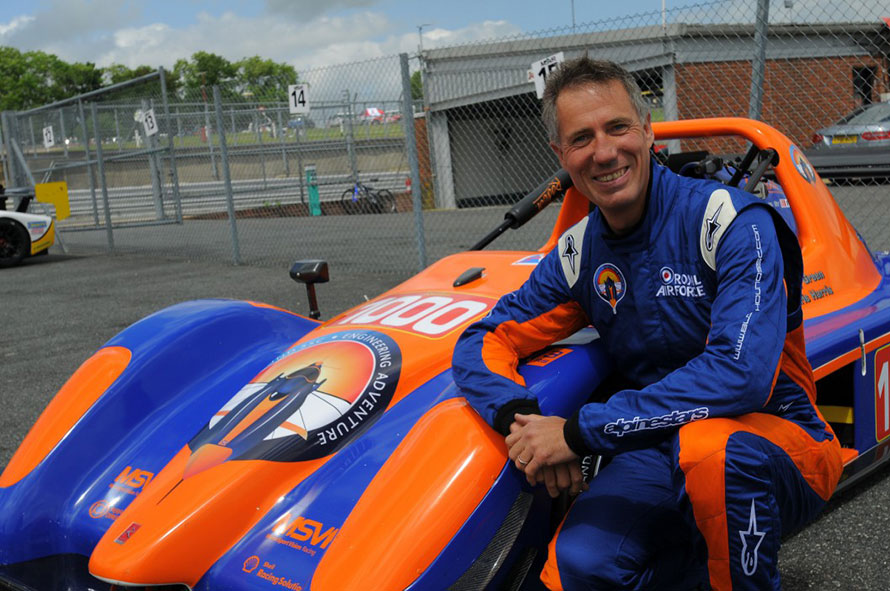 Why do I need to practise steering when I’m planning to go in a straight line? First, Bloodhound may not want to go perfectly straight. Tiny changes in the surface level, caused by anything from flooding patterns to localised microgravity from sub-surface rock formations, will add to the effects of crosswinds and small changes in the consistency of the dried mud surface. At 1,000mph it doesn’t take much to knock you off line.

Bloodhound’s steering will change enormously with speed, as the wheels first cut ruts in the surface, then rise up and start to plane across the surface, dramatically reducing the lateral grip and control, before the car goes supersonic and the aerodynamic forces dominate everything. At high speed, turning the front wheels just one degree will generate huge lateral aerodynamic forces, so a very small steering input can result in a dramatic change of direction.

Then you have to add in the effects of the aerodynamic stability. The aerodynamic forces increase with the square of the speed, and as you’re heading up towards four figures they become truly colossal. If the car isn’t balanced and stable, then it will be uncontrollable.

Remember Kimi Raikkonen losing the rear wing on his McLaren in the German Grand Prix at Hockenheim in 2004? Despite the car’s fat, grippy tyres, the unbalanced aerodynamic forces spun him backwards down the track and into the barriers, and he was going really slowly — only 200mph. Behind the wheel of Bloodhound at 1,000mph the forces will be 25 times greater, so we need to control them very precisely.

The Radical is a great way to develop that skill. The steering response changes with the aero balance, the track grip, the amount of power applied, the amount of brake force and so on. Finding and regulating the point at which controlled drift becomes uncontrolled, and getting the feel of a car that’s running on the absolute limit of grip just before the back end breaks away, is very useful — and, incidentally, enormous fun. 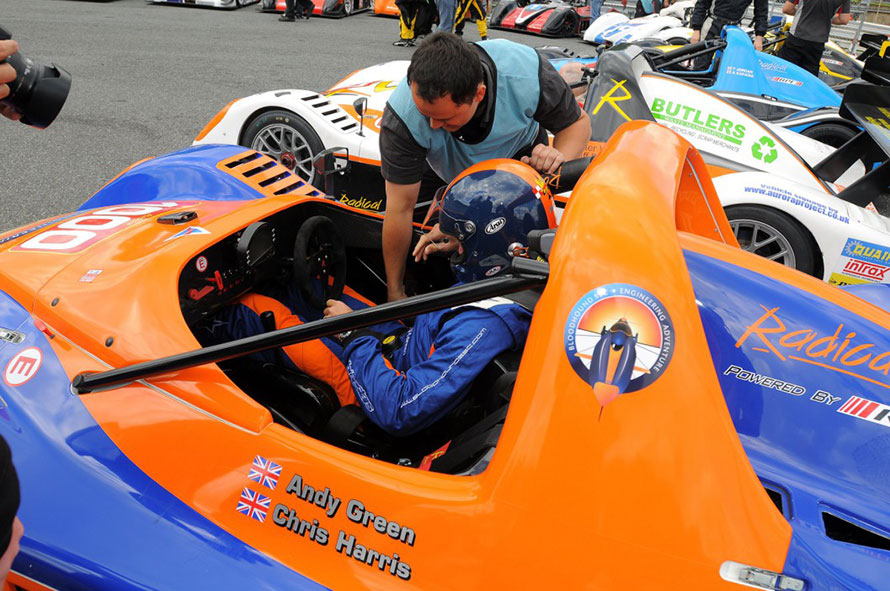 It’s taken five years to design and make the world’s fastest wheels, and Rolls-Royce has tested the final design to confirm it works, the fastest spin test it has yet done. The wheels are solid forged aluminium, which will probably make for a very firm ride on the desert surface, so the Radical’s race-tuned suspension is good practice for this too.

Another plus point is that the Radical contains a carbon fibre tub that affords the driver excellent protection. You wouldn’t choose to drive into a concrete wall, but if someone shunts you into one, you know the car can take it.

Likewise, Bloodhound will be as safe as it can possibly be. We work on the aviation principle of “Alarp” — keeping the risk “as low as reasonably practicable”. We’re building safety into every bit of this vehicle; for example, by fitting multiple fire detectors and seven extinguishers. I will be wearing a special race suit developed by Alpinestars that’s totally fireproof, not just flame-retardant. Yet we’re not using an ejection seat; ejection systems are heavy, complex and have their own risks — detailed risk assessments show that the safest place is in the car.

Of course the Radical will not approach the noise levels in Bloodhound. I’ll be strapped into a small, hot cockpit that is going to be the loudest place in the world. At low speed the noise from the Eurofighter Typhoon’s EJ200 jet engine will be ear-shattering. When the car goes supersonic I can’t hear the jet any longer because I’m driving faster than the sound it’s making, but by then the supersonic shockwaves coming off the top of the cockpit will be even noisier. Jaguar is putting a lot of effort into helping us soundproof the cockpit to reduce this noise to bearable levels.

Add in 2g of acceleration, 3g of deceleration — that’s a speed loss of 60mph a second — and all this imposes high physiological loads on a human being. At the same time I’m processing large volumes of information and dealing with the precise control of a jet engine and a rocket motor while keeping the car straight with a steering system whose characteristics change every second.

So it’s good practice to get something of a battering on a racetrack in the Radical. It’s a chance to get used to the discomfort. The priority, after all, is the same for both the Radical and for Bloodhound, which is to keep the car shiny side up and pointy end forwards.

And it’s all building up to the drive of my life next summer. Hundreds of millions of people are now following what we call our “engineering adventure”. When I visited China earlier this year we generated an internet audience of more than 175m in that country alone, and 100,000 schoolchildren in Britain every year are doing Bloodhound-inspired science lessons, with thousands more around the world taking part in our model record car challenge. 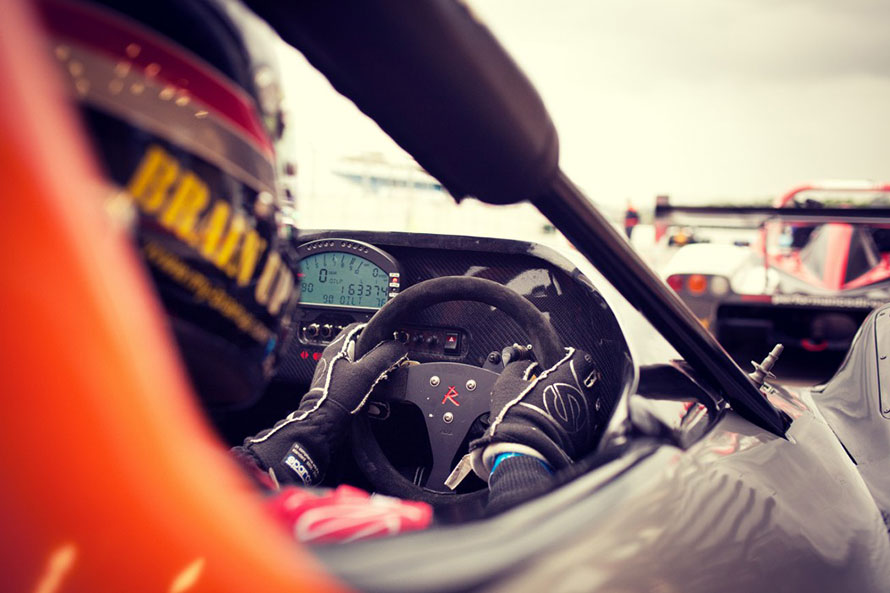 Bloodhound is showcasing the quality that Britain offers in engineering, technology and innovation, in the most exciting way possible. We’ve not only got one of the best aerospace industries in the world, we’ve got by a country mile the best motor sports industry, which is why all the Formula One teams are based here.

This country spends 1% of the world’s research and development budget but files 14% of the patents. If we’re going to maintain this world-beating performance, to continue to punch above our weight, we need to inspire the next generation of young engineers and scientists, and we need to do it now. This is what Bloodhound is all about. We’ve fitted the car with 12 high-definition video cameras and 500 sensors, and we’ll be streaming live video and data on the internet every time we run, to engage a global audience.

When you stand back and think about it, what we’re trying to achieve is immense. We’re building a car that will be 12 miles from the starting line in just two minutes. It doesn’t matter what language you speak or where you live in the world, people are genuinely astonished by that.

Around Britain and across the world we have enough experts to fill a football stadium — I love that thought — all working to push Bloodhound to 1,000mph, and this week the public will get their first chance to see the results of their efforts, with the unveiling of the actual car at Canary Wharf, east London.

That event brings us a big step closer to the 12-mile track in South Africa and — we hope — a new world record. We will be making history. More importantly, we will be making engineers.