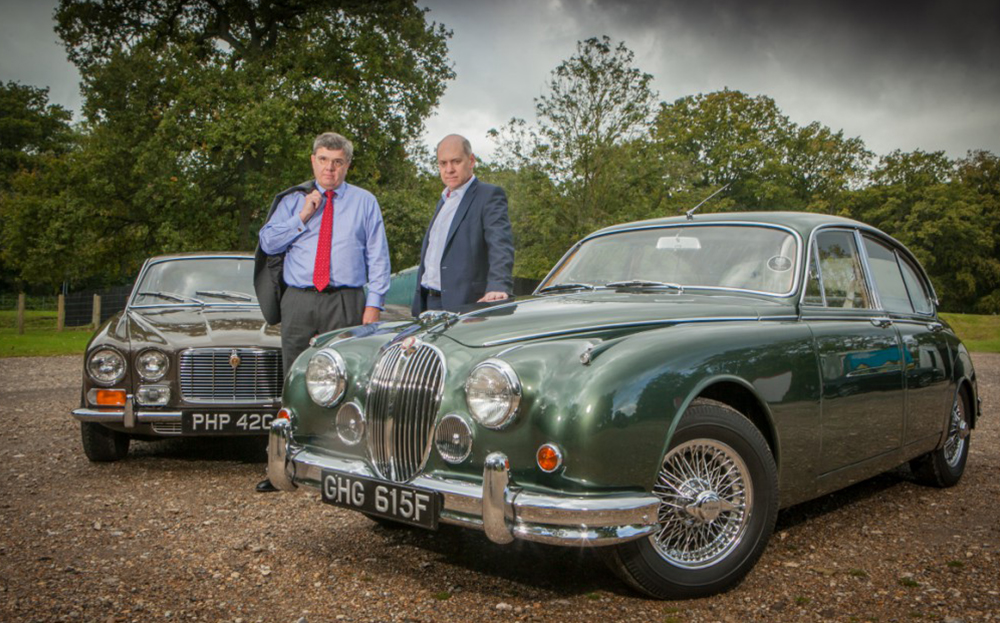 COPS AND robbers in the Sixties both drove Jaguars. They were fast and stylish and there were enough of them about to avoid unwanted attention. I know this because back then I used to watch crime films and cop shows. So who better to join me for a dash through the Kent countryside than Peter Clarke, an old friend from my anti-terrorism days in MI5 and someone who knows more about catching villains than most.

It also seemed fitting that as we road-tested the cars we drove through West Kingsdown, where the gangster Kenneth Noye had his 10-bedroom mansion before a judge provided him with free accommodation at the taxpayers’ expense. Noye certainly knew a thing or two about getaway cars.

Browse the Jaguars for sale on driving.co.uk

Peter kindly pointed out that as he was in possession of a fuller head of hair, he should be on the side of law enforcement while I should be the crim. I was happy to oblige because it meant stealing what was clearly — to my mind at least — the better of the two cars. The Jaguar Mk 2 is one of the most distinctive English sports saloons — sleek, purposeful and with well-known styling features. 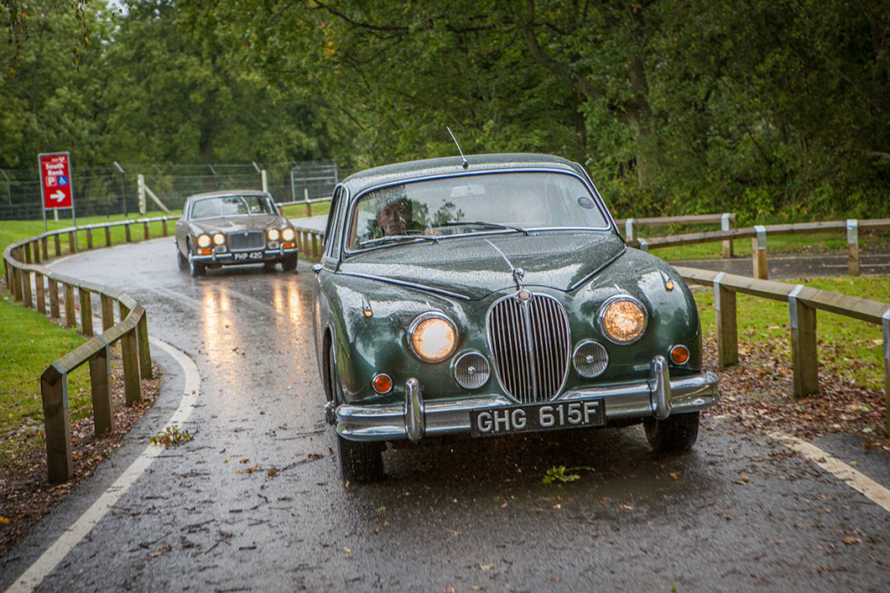 There is plenty of chrome but it is used with subtlety to highlight the line of the body and the detailing of the lights and bumpers. This is a pure English thoroughbred. Inside, the same themes continue, with a high-quality walnut dash, lambswool headlining and leather upholstery. The front seats are very comfortable, though the rear is not particularly generous.

But then you are only going to be in there for a few minutes until you swap cars and you will be busy trying to stuff the loot into mailbags so you won’t have time to worry about the knee room. That said, you could get a fair few mailbags into the boot and still have room for the sawn-off shotgun.

The straight-six XK engine in the Mk 2 is the one that Jaguar used for many years in the postwar period. In this case it displaces 3.8 litres, which gives the car a good turn of speed. There are disc brakes — a novelty in those days — and power steering, though for today’s tastes it is still heavy to drive with its huge steering wheel. Quiet it isn’t, however: wind and engine noise both intrude.

The Mk 2 is instantly recognisable and takes you straight back to the classic period of English motoring in the late 1950s and early 1960s. That makes it a very attractive collector’s car and prices have risen in recent years. A really good one can set you back £60,000 or more but there were a lot sold between 1959 and 1967 so you can still pick a less tidy example for a much lower price if you don’t mind doing some work on it. 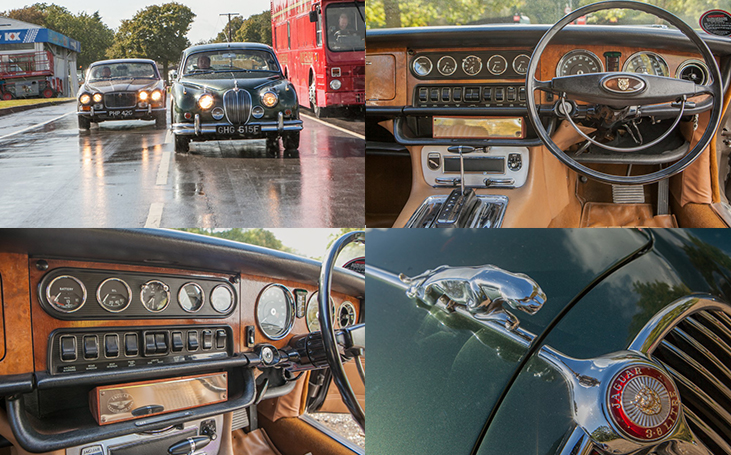 Our other car was an early XJ6, which actually overlapped with the Mk 2 on the market for a short period. Driving the XJ6 you swiftly realise how far the motor industry had come in only a few years since the Mk 2 was launched. It is much quieter and much lighter to handle, but I thought something had also been lost.

The car is fired up with an ignition key, not a starter button, the dashboard is topped with unattractive black plastic and the quarterlights no longer open on chrome catches but via a rather nasty black plastic knob. The XJ6 is a more competent car in a practical sense but it feels somehow less confident in itself than the Mk 2.

But even if it less glamorous, the XJ6 will still have a place in our film. After the shootout has happened, the “suits” will arrive from London to mount an inquiry and to point the finger of blame at the copper who took all the risks. The suits will arrive in the XJ6.

A steal at any price 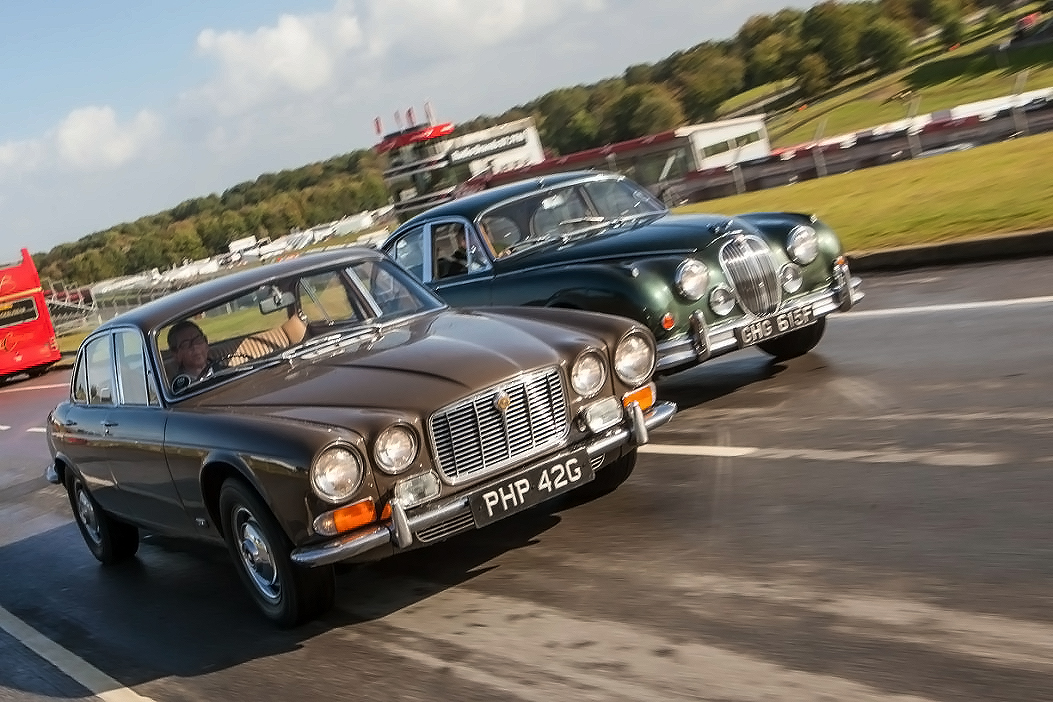 AS A young police constable in the 1970s I remember a story from an old sweat on my shift. He had been on the beat in Oxford Street in central London in the 1960s. The traffic was jammed solid, so he stepped out and directed cars into a side street to relieve the pressure.

It was only as he waved a Mk 2 Jaguar past that he noticed the four burly occupants, complete with stocking masks, having just made a withdrawal from a nearby bank. Apocryphal or not, this Inspector Clouseau-esque tale catches the spirit of the times.

It was only as the policeman waved a Mk 2 Jaguar past that he noticed the four burly occupants, complete with stocking masks, having just made a withdrawal from a nearby bank

The aristocracy of the criminal classes in those days were armed robbers, and banks were their hunting estates. A classy and quick set of getaway wheels was essential, so what better than a Jag? Of course, the cops had to go one better. And that’s when the XJ6 came into its own as a pursuit car. At least that’s the way it was on the telly and the silver screen.

In reality the XJ6 was never the chase car of choice. Police forces couldn’t afford to keep them on patrol for the odd occasion when they might intercept a bank hold-up. The Met’s Flying Squad — popularly known as the Sweeney — drove Triumph 2000s in the Sixties and Ford Granadas in the Seventies.

No, the XJ6 was more a vehicle for ferrying chief constables round. But how would it perform in our two-car test? Jonathan’s more menacing demeanour meant he was the natural choice to drive the Mk 2 getaway car, even though as students at Bristol University he had taken the more cerebral classics route, while I, being less of an inky swot, had studied law. But it was soon clear he had grabbed the better motor. 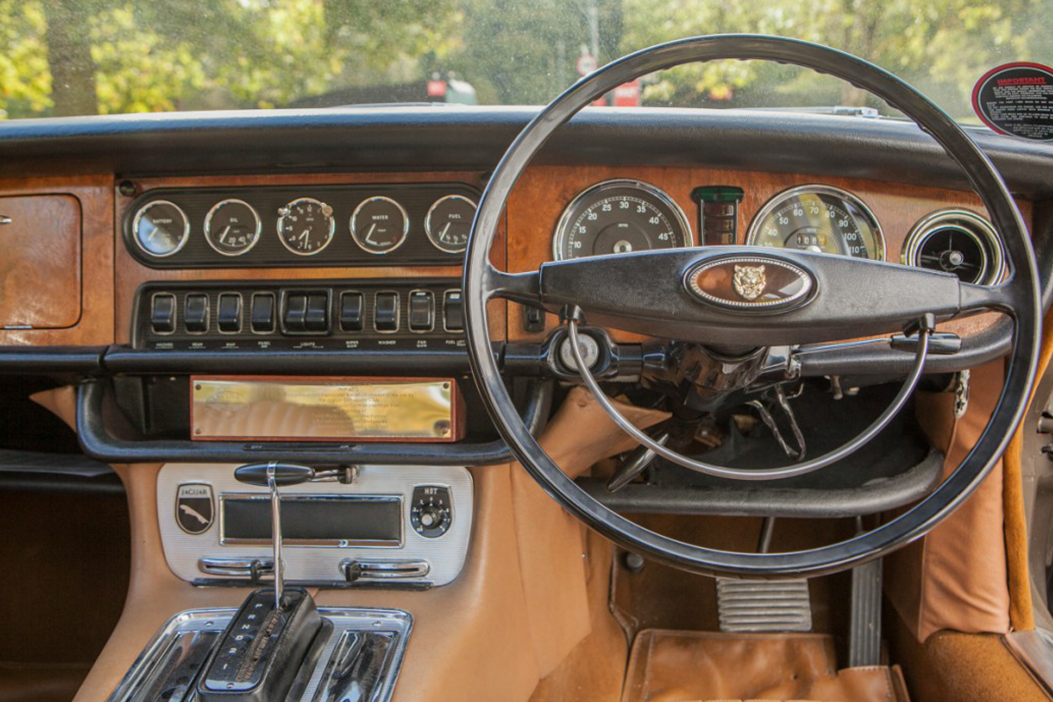 Despite being more modern the XJ6 lacks urgency compared with the snarling vibrancy of the Mk 2. Even with 4.2 litres under the bonnet and decent performance figures of 0-60mph in less than nine seconds and a top speed of more than 120mph, the car gives the impression of a wafting machine. As the speed rose, the XJ6 settled into what felt like its natural role — that of a long-legged tourer.

Our XJ6 was the personal car of Sir William Lyons, the former chairman of Jaguar. I thought it was brown, but was quickly corrected by the chaps from Jaguar who told me it was “sable”. When I was 13 I had a slot-car XJ6 bodyshell that I painted this very colour. Clearly an authentic late 1960s shade of, er, brown.

Its main advantages over its predecessor were in comfort and refinement. The XJ6 was and is a beautiful-looking machine; the fact that it was conceived some 50 years ago is remarkable. Nevertheless, there are some intriguing anomalies. The handbrake is an umbrella-handle type of contraption under the dashboard, reminiscent of the one on my father’s 1948 Ford Prefect. Although the power steering is far more powerful than that on the Mk 2, the steering wheel itself is still huge and has an incredibly narrow rim.

So really the roles should have been reversed in this head-to-head test. The XJ6 is more suited to the work of Jonathan’s colleagues in MI5, silently approaching and sidling alongside the target in clubland or the gravel drives of the shires. Much more George Smiley than Jack Regan, and strangely seductive enough for a hint of Mata Hari. Refined and decorous, the XJ6 is uncomfortable with the hurly-burly of car chases.

Which leaves us to ponder what happened to the days when the Jags reigned supreme as getaway cars. Well, even the thickest of thieves came to realise that fitting four decent-sized robbers, sawn-off shotguns and swag bags into a medium-sized saloon was a bit of a squeeze.

The new Ford Transit van was the perfect answer, and became the robber’s workhorse for many years. The Jags could go back to the golf club and the RN7 en route to Provence.

Make yourself at home, chief constable

Browse the Jaguars for sale on driving.co.uk