“THE COUNTRY air is like champagne.” With the top down and my hair being whipped up by the wind, I thought of the words my grandfather, Raymond Greenway, used to describe the thrill a dose of fresh air would give him during our trips out in his sizzling red 1960 MGA Roadster.

This time, though, it was my hands on the steering wheel because in May this year, at the age of 92, he passed away, departing his beloved world of classic motor cars and open roads.

As I navigated the winding country lanes we once travelled together, terrified of oversteering on a bend, not allowing myself enough distance to brake or simply losing control of this distinctly un-modern car, all without the protection of a seat belt (better to be thrown clear than trapped in the wreckage, was the old thinking), I realised the experience of inheriting Frisky – her name inspired by the FSK number plate – was going to be a huge, and constant, learning curve.

The first lesson? As driver, I had to find a suitable hat to keep the hair out of my eyes.

Frisky is a car with pedigree. When she came off the production line 57 years ago, she had an Iris Blue body, blue hood and white-walled tyres. Built left-hand drive for export, with a 1600cc engine and top speed of 105mph, she spent the first 30 years of her life in California. 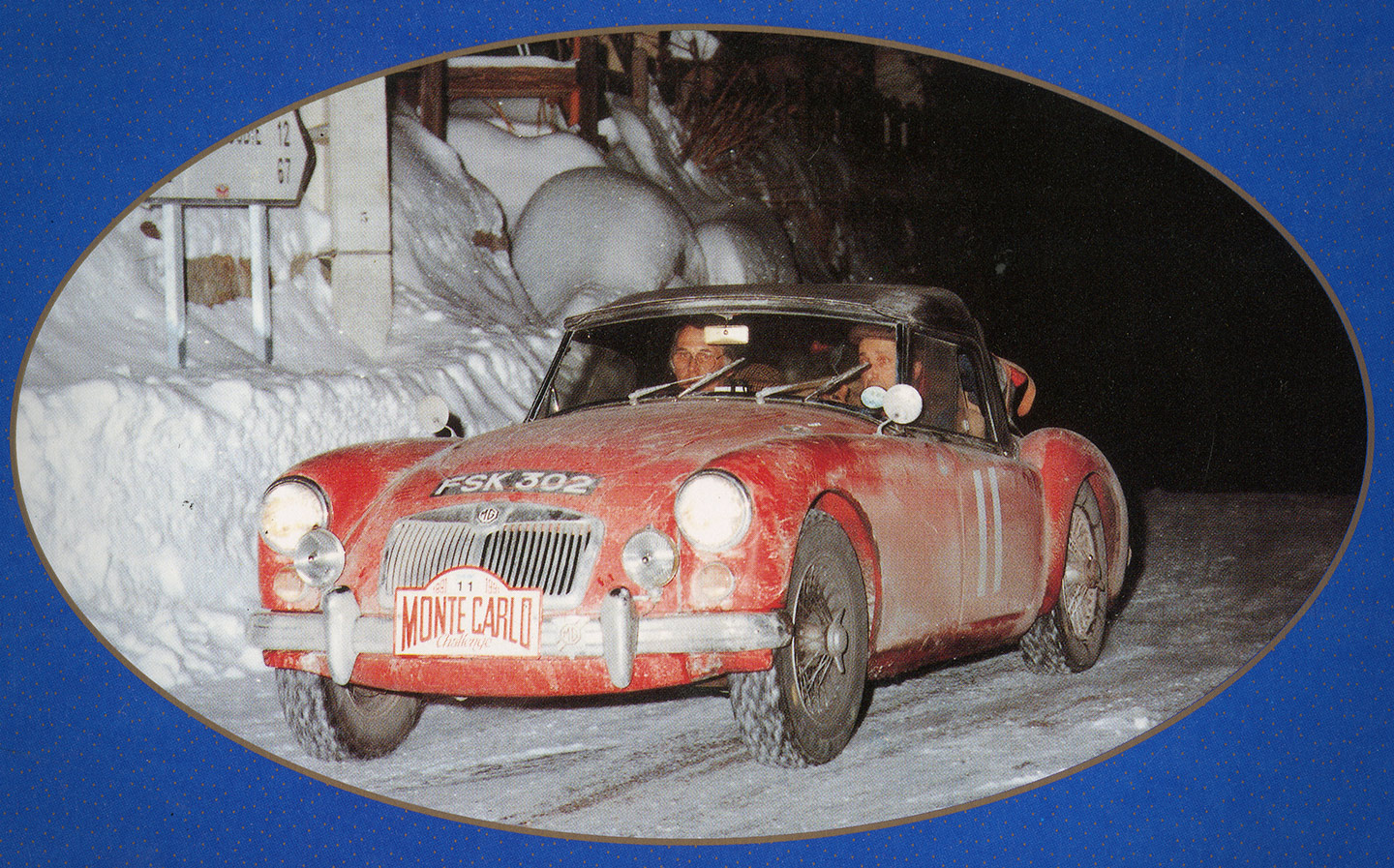 In 1990, she was re-imported by MG specialists Brown & Gammons, converted to right-hand drive, re-sprayed and entered into the 1991 Monte Carlo Challenge. Driven to victory in adverse winter conditions by Ron Gammons and Paul Ester, who fitted the Mota-Lita steering wheel, it was this achievement that gave Dodo a huge sense of pride in his purchase.

To say that I enjoyed being Dodo’s passenger is an injustice to the experience of whizzing around in a classic car; it is a treat that lifts the spirits no matter what. But as the person who now holds the key to the ignition, it is an invigorating experience for very different reasons.

First came the fear. My pioneering solo drive was a disaster that entirely dashed my nerves. I set off beneath a blue sky that didn’t last, and soon enough I was being pummelled by hailstones. As rain and pellets of ice lashed the interiors, creating a puddle on the passenger seat, I pulled into the furthest corner of a service station car park in a complete panic – I didn’t know how to put the roof up, and I’d forgotten to bring the windows. 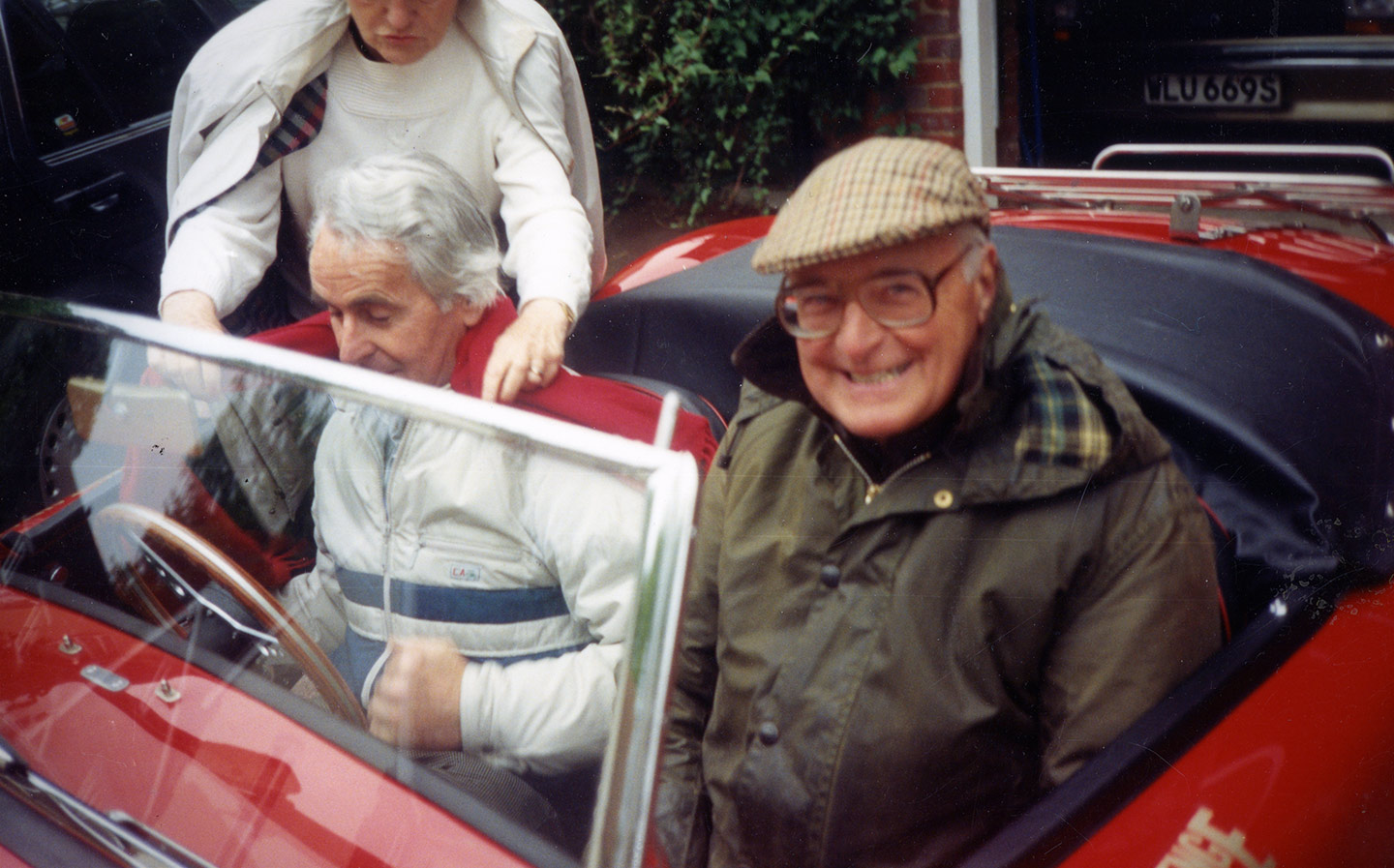 Despite my poor preparation, luck was on my side – two fellow classic car owners on their way to a show came to my rescue, and between the three of us we managed to (just about) secure the soft top. Soaked, shaken, and embarrassed, my drive home was miserable. I crunched the gears and had to pull over on several occasions to regroup. I discovered Frisky is not equipped with hazard lights.

My confidence washed away, I vowed that the next time I took her out on the tarmac I would treat her with more respect.

With a confessional tone, I admit that even as the daughter of a mechanic, I know very little about how cars work. Despite my dad’s best efforts to inspire an interest. I’ve been driving for a decade and have only owned rust-bucket Ford Fiestas. But Frisky has changed all that.

My father’s patience has been tested as he’s taught me the basics of engine maintenance, as well as the importance of regular oil and water checks, and monitoring the pressure gauges as I rack up the miles.

To build on the knowledge my father is bequeathing me, I spend time on car forums and talk to fellow MG drivers on social media. I’ve even taken over Dodo’s MG Car Club membership, and talk all things MG with his oldest and best friend, Dennis, who has an MG TD in an equally eye-catching red. 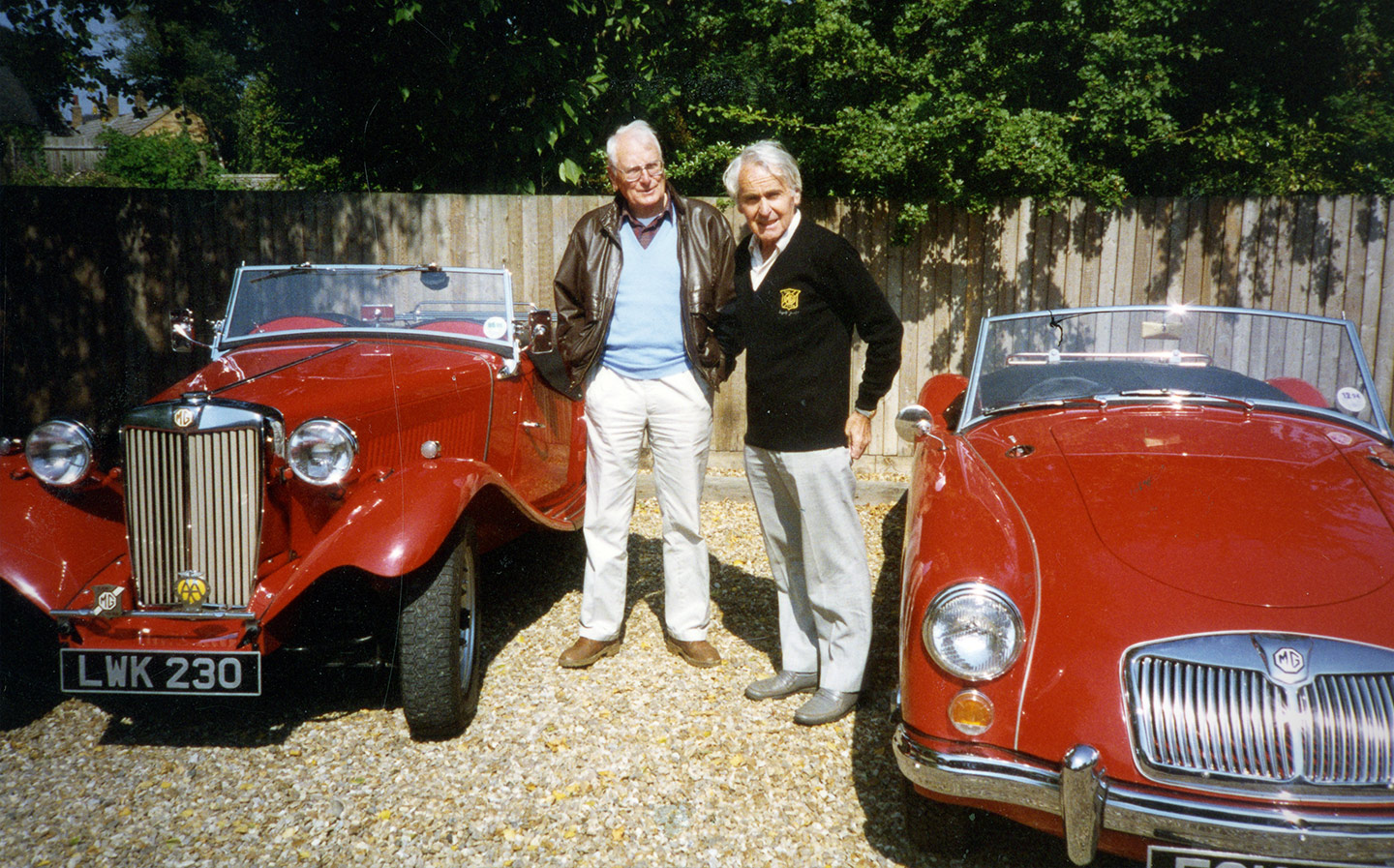 Raymond Greenway with best friend Dennis and his MG TD.

When Dodo’s wishes for Frisky to remain in the family were expressed, I didn’t give it a second thought. Inspired by his older brother Bob, and encouraged by Dennis, Dodo had been an MG man all his life.

Taking on ownership is a way for me to keep part of him, and one of his biggest passions, alive. And close. He recently wrote, “I’ve grown old with the car, and it is still as well preserved as I am,” so my aim is to keep her for as many years as possible, and give her the same care and attention as he did.

It might sound silly to some but the feeling of responsibility I have has triggered a level of paranoia and protectiveness that I never thought could be associated with a machine. Frisky attracts a lot of attention and I worry about whether this is always a good thing. I am starting to appreciate why cars can be such an absorbing and precious fascination. 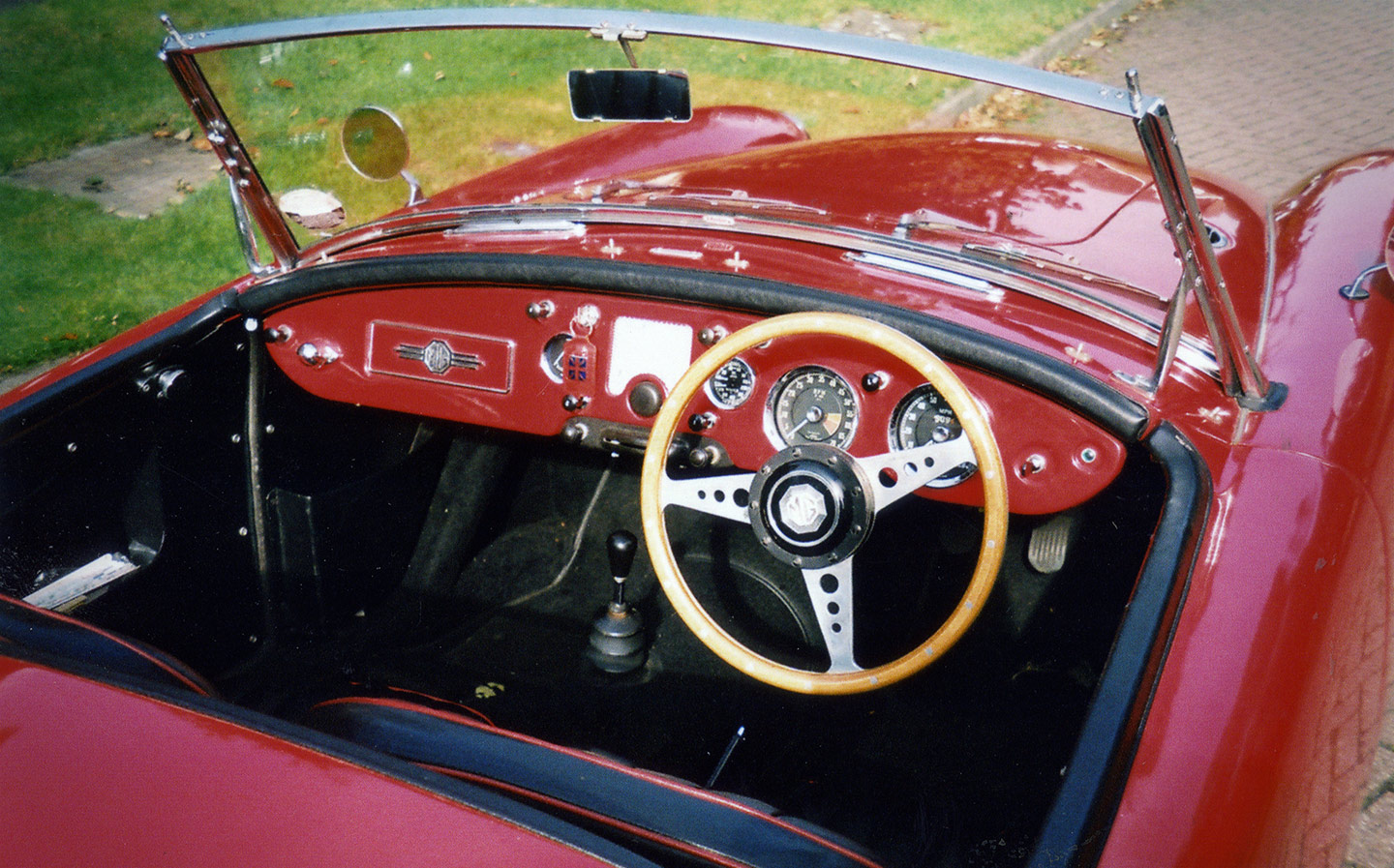 Frisky will need constant TLC, and although the practicality and cost of that going forward is a big consideration, I am immensely grateful for the privilege and opportunity that Dodo has given me.

I’d like to re-trace some of Frisky’s previous journeys – rallies that Dodo and Dennis took part in, as well as the Monte Carlo Challenge route – but I’d also like to take her to pastures new.

She isn’t perfect as she is. I’d like to fit seat belts and a (hidden) socket to power a sat nav. But there will be no radio, no cup holder, no modern luxuries– I’d like to keep her as true to her original design as possible.

Part of Frisky’s appeal is her rawness, to hear the engine growl and feel her alive under me gives me the sense of being closer and more in tune with the beauty of her mechanics at work. I get in Frisky to drive, and nothing more.

I’d like to close with the words of Dodo’s friend Dennis.

“So what is the attraction of driving a classic?” he asks. “Like Ratty in Wind in the Willows, who loved “just messing about in boats,” is it just messing about with MGs? Is it the satisfying roar of the exhaust from an engine you’ve tuned, and the sheer exhilaration of driving an open car? Is it the sensuous delight from those classic lines? Or is it perhaps, that it’s my bird puller? Perhaps it’s a little of all those things. But above all, it’s fun.”