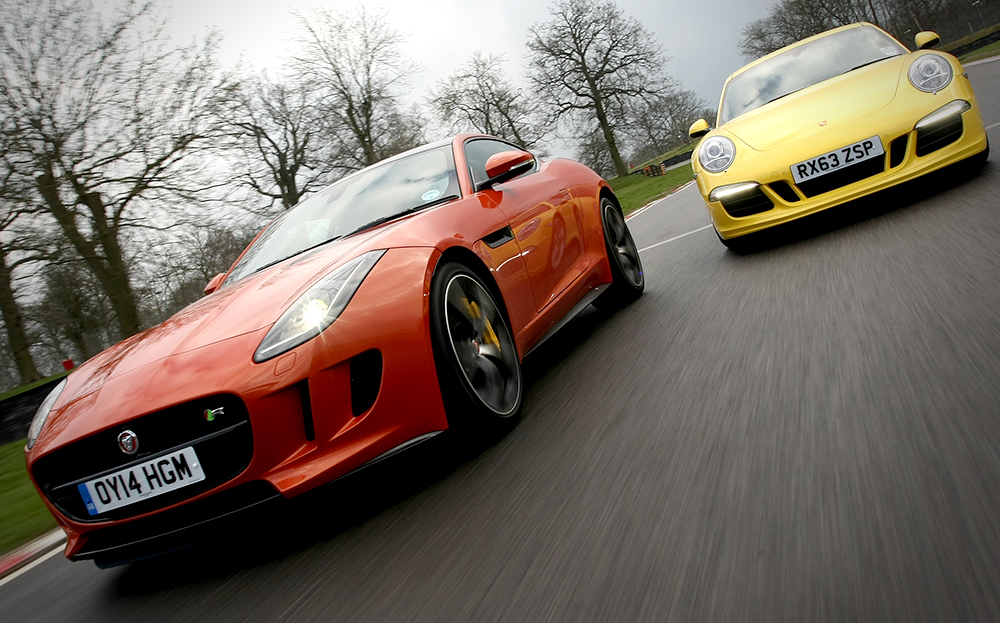 IN TERMS of competition it is up there with Messerschmitts versus Spitfires; two machines, each brilliantly engineered, supremely fast and dangerously desirable. But one is British, the other is German.

The Porsche 911 Carrera S is the latest from the master sports car builder: elegant, clever and with a Teutonic sense of stability. The Jaguar F-type, meanwhile, is about as unpredictable as a 1970s-era Midlands factory assembly line: when it’s good, it’s brilliant, when it’s bad, it’s terrible.

So which one is better, the reliable Porsche or the livewire Jag? We test them out in the ultimate two-seater head-to-head. 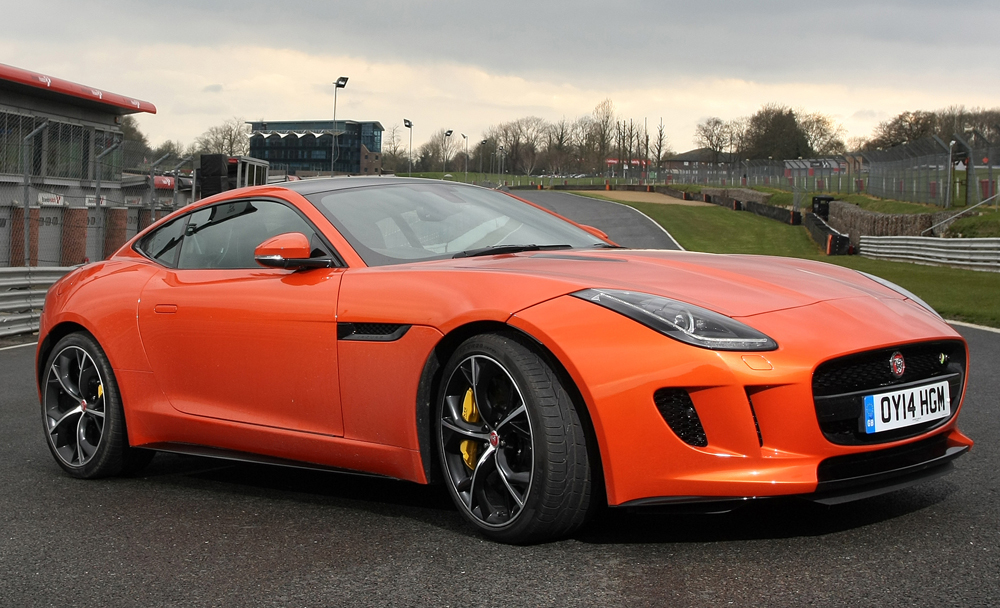 THE F-type R coupé looks sensational. But you already know that from the picture. The question is, can it give the Porsche 911 Carrera S a bloody nose on that great elongated playground called Brands Hatch?

The 911 Carrera S is the benchmark sports car: comfortable enough for everyday driving yet thrilling enough to wheel out of the garage at sunrise on a Sunday, when the roads are quiet and you want to exorcise your inner driving demons.

Search for and buy a quality used Jaguar F-type on driving.co.uk

The F-type R has its work cut out to match it, let alone beat it. It certainly sounds the part. Just starting the R at an ungodly hour on any day of the week will rattle your neighbours’ windows and set off their car alarms. The exhaust blares into life like a flatulent buffalo. Once you’ve settled into the soundproofed cabin, though, with its expansive glass canopy and joystick-style gearlever, it feels like Buck Rogers climbing into his Starfighter.

The instrument panel continues the space-age theme, with copper colouring for the flappy paddles and some of the switchgear, and instruments and mood lighting that turn to red when the driver selects the dynamic driving mode.

It’s a brave driver that does so. Even in normal driving mode, where the electronic driving aids keep a tight rein on proceedings, the rear tyres slip and the tail slides as the power and torque of the supercharged V8 engine overwhelm them.

This car is breathtakingly fast and more than a little bit scary, with a tendency to twitch as soon as you dab the throttle — even on straight, dry roads and in the face of oncoming traffic. 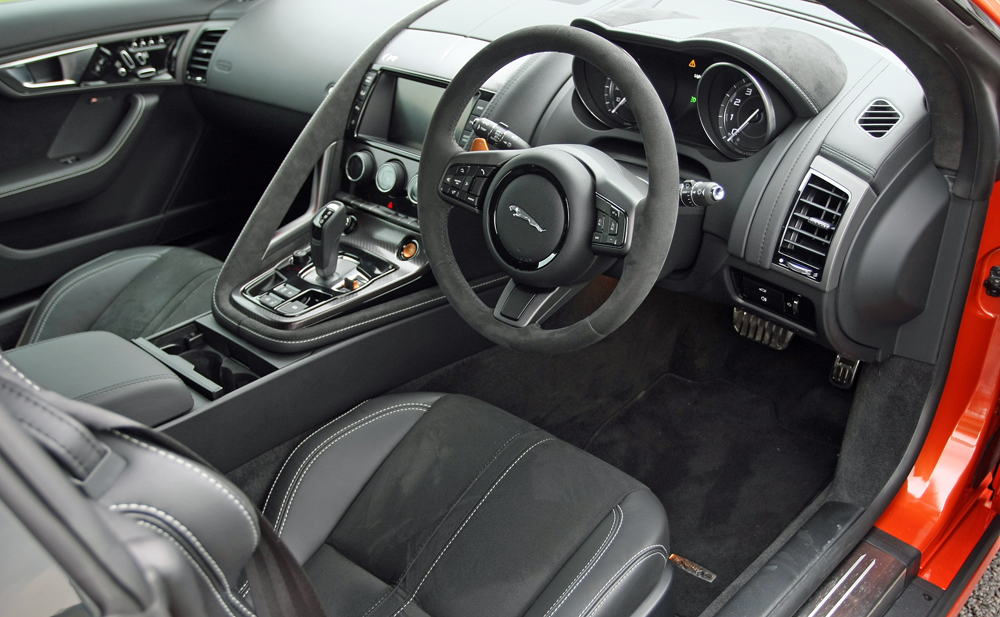 The Porsche’s centre of gravity feels lower, helped in part by a driving position that puts your backside on the floor. Turn the car into a bend and it stays flat and composed. The Jag has quicker-acting steering but this sensitivity gives the car an edgy feel, and it rolls and heaves more than the Porsche.

Even the optional carbon ceramic brakes didn’t make up for the Jag’s bad behaviour. The pedal felt soft and had a disconcerting amount of travel. Loath as I am to admit it, the 911 is more together and reassuring.

This car is breathtakingly fast and more than a little bit scary, with a tendency to twitch as soon as you dab the throttle — even on straight, dry roads and in the face of oncoming traffic.

In terms of sound, the Jag’s V8 has the edge on the Porsche’s flat six, even though Stuttgart’s engineers have done a fine job in tuning its engine note. Both feature adaptive exhausts that can be switched from sensible to “what the hell was that?” but the Jaguar’s exhaust pops and crackles deliciously on upshifts and when slowing down.

So, decision time. You’ve won the lottery. Which would you take home? On a dry racetrack — the F-type R garnered rave reviews at its press launch at the Circuit de Catalunya in Spain — the Jaguar is undeniably a lot of fun. It’s a hot rod — a hooligan in Hugo Boss. On British roads, though, it’s frankly nerve-racking. I arrived at Brands Hatch looking like Dreyfus, Inspector Clouseau’s boss in the Pink Panther. Heading home through the London traffic I selected “rain and snow” driving mode, even though there was barely any moisture on the road.

So there. Decision made. It has to be the Porsche. Unless you happen to own a 911 already and have joined the growing ranks who think that it’s become too grown-up for its own good. In which case, step forward for an adrenaline shot — and drive the Jag. 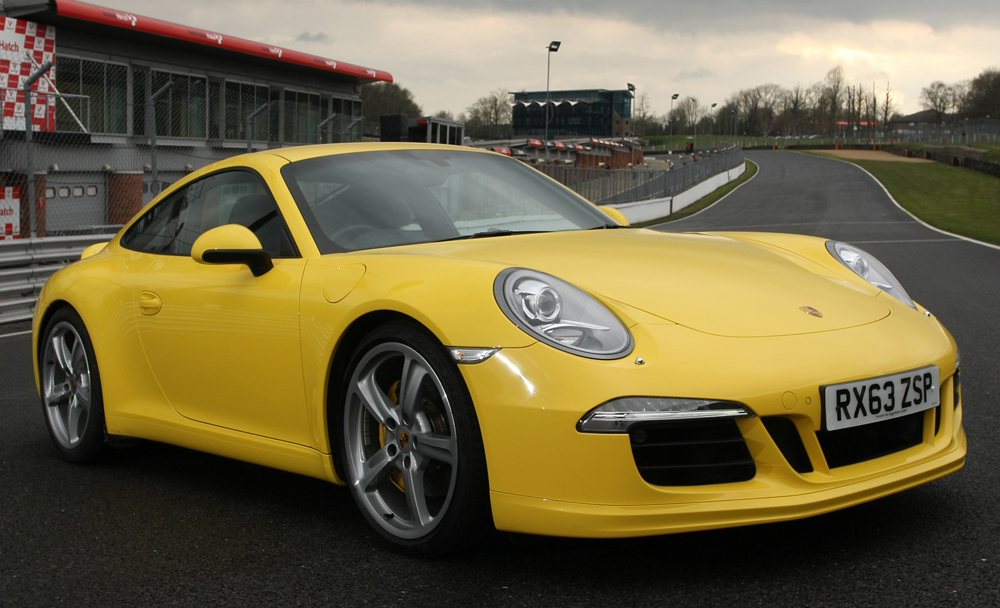 IT’S ONE thing to design a building that looks like a gherkin but quite another to make a car that looks like a banana. Petrolheads, whisper among yourselves; this could be Porsche’s first major slip-up since the 928 proved a sales flop with the champagne-sipping yuppie brigade in the 1980s.

Jaguar’s burnt orange colour scheme feels much more with it — a Paul Smith suit in the face of Pringle jumpers. Wait, I hear you say, you can order the Porsche in any number of other colours. True. But this could be the sign that in a single leap, Jaguar has built a coupé that deals the winning hand in desire.

The yellow warpaint and add-on rear spoiler — part of a £2,832 SportDesign option that references the “ducktail” wing of the iconic 911 2.7 RS — do the 911 no favours, making it look like an oversized Tonka toy, and making my job more difficult to convince the world that money can’t buy a better sports car.

It isn’t going to get any easier when presenting the case for and against its cabin. The Porsche cockpit, for 50 years the stuff of legend because of its odd driving position and robust quality, may have come good with this 991-generation model (it is more comfortable than a luxury saloon and, as ever, built to outlast the owner) but it can’t match that of the F-type R for excitement.

Search for and buy a quality used Porsche 911 on driving.co.uk

It does a nice line in practicality, though. The cabin is more spacious, and there is a pair of occasional rear seats that can be folded down to give a luggage area. You’ll need it: the space under the bonnet is a miserly 135 litres.

What of the important stuff? The heart and soul of a sports car: its engine? The saying goes that the 911 has its engine in the wrong place and because of this there’s no room for anything larger than the signature flat-six-cylinder engine. The Carrera S therefore has two cylinders fewer than the F-type R, and yes, it has less power — a whopping 142bhp difference. But drive the two cars back-to-back on a damp British country road and it’s the 911 that can generate and carry more speed.

This is because the engine is actually strategically placed over the back tyres and helps pin them to the road. By contrast, the F-type R’s rear tyres spend more time slipping than gripping; they can’t handle the power, or more specifically the torque from the supercharged V8 engine. 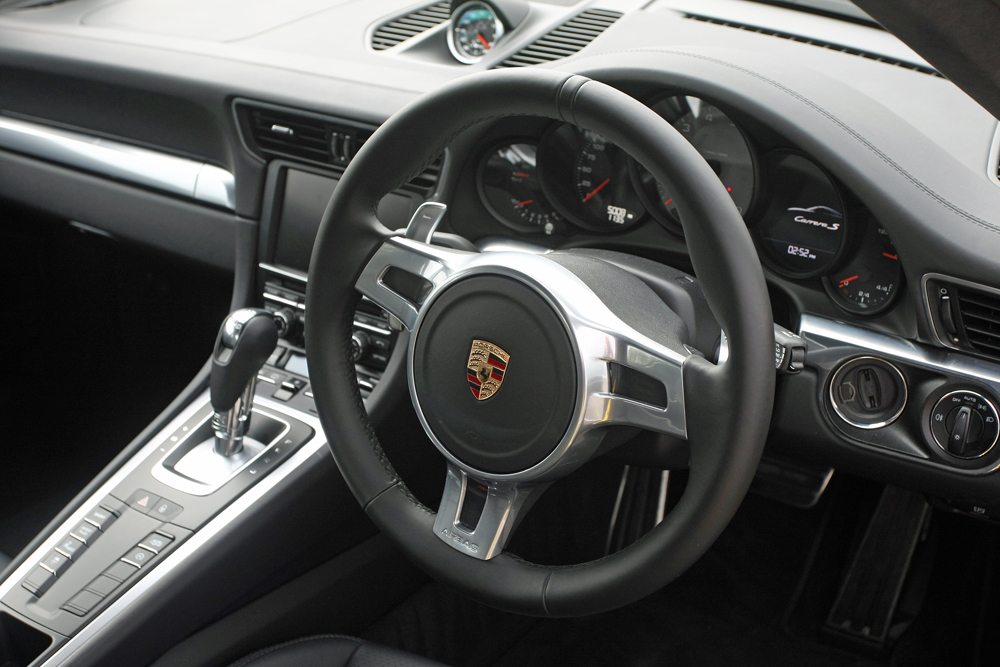 The Porsche has perfect throttle response, the driver gets a real sense of how much grip the front and back wheels have and the car instils a sense of confidence. You can drive it to its considerable limits without fearing for your life, and the Sport or Sport Plus chassis and driving aid settings can be supplemented by switching the damping back to their normal, more pliant Comfort mode to soak up all the lumps and bumps of British roads.

The Carrera S has less power — a whopping 142bhp difference. But drive the two cars back-to-back on a damp British country road and it’s the 911 that can generate and carry more speed.

All the while, the Carrera S’s engine changes its tune like the ghost of Pavarotti warming up. So, powerful brakes, an impressive PDK dual clutch gearbox and excellent seats that hold driver and passenger snugly in place make this an impressively rounded car.

It’s not hard to see why the 911 has endured for more than 50 years: it feels like the product of half a century of exhaustive improvement. Most importantly, it doesn’t put a foot wrong where it counts — on the road. 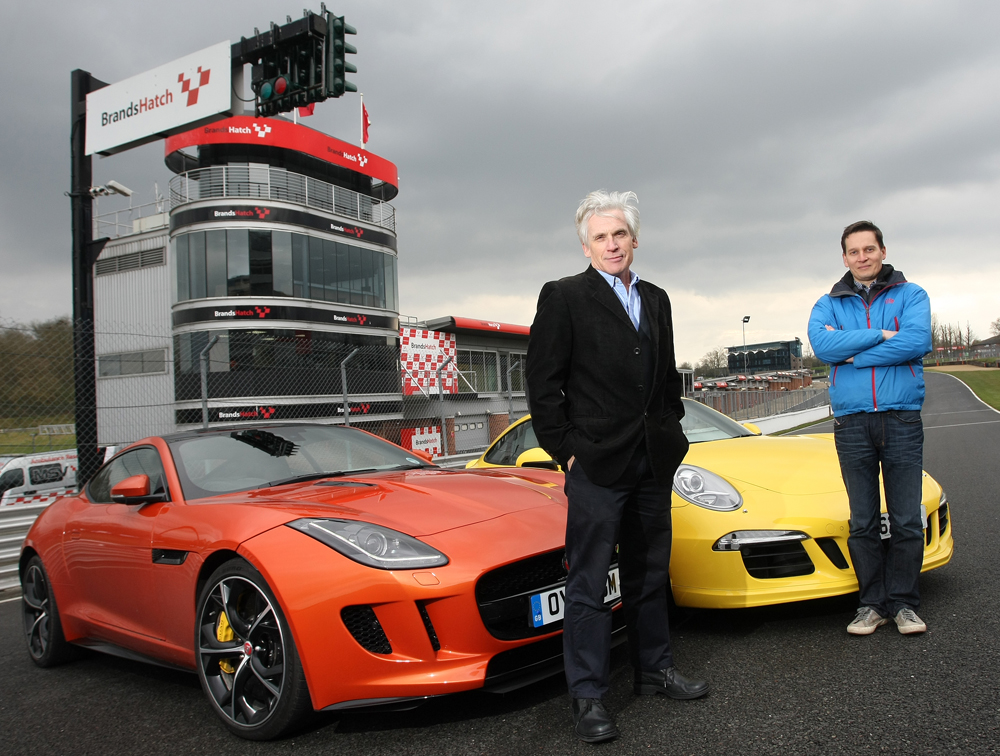