HAVE YOU switched off Formula One on your TV this year? Earlier this month, Luca di Montezemolo, president of Ferrari, was alleged to have written to Bernie Ecclestone, president and CEO of Formula One Management, to say the sport had lost its way in recent years, with too strong a focus on cost-cutting and fuel-saving. Fans, too, have expressed concern over the quietness of the new V6 turbo engines in this season’s cars, compared with last season’s roaring V8s.

Search for and buy a used Renault on driving.co.uk

However, as Driving discovered on a tour recently of a leading F1 factory, there is good reason to switch the sport back on. During our tour of Red Bull Racing in Milton Keynes, in addition to state-of-the-art production machinery that includes 3D printers that can create solid objects from metallic powders, we found Renaultsport hybrid powertrains that are among the marvels of the modern world, owing to their mechanical complexity and unbelievable efficiency.

Consider this: in the course of winning the 2014 Canadian Grand Prix, Red Bull’s Daniel Ricciardo burned 33% less fuel than his teammate Sebastian Vettel when he won the same race, over the same distance, in 2013 (100kg of fuel compared with 150kg). 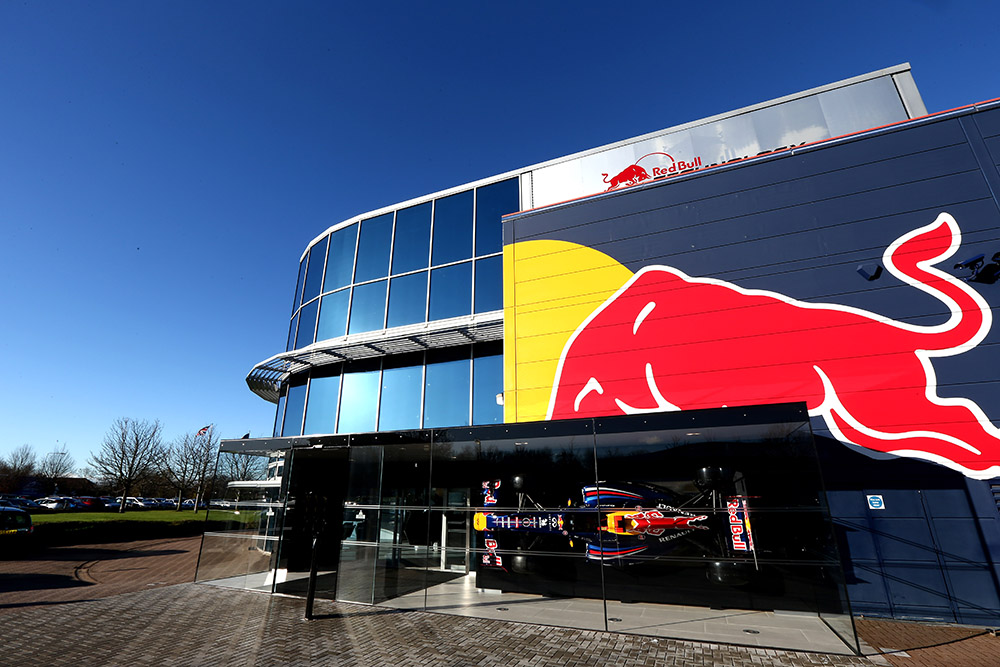 Driving.co.uk sat down with Rob Gray, Red Bull Racing’s deputy chief designer, and Ben Fletcher, Renault’s product manager for electric vehicles, to find out more about F1 technology and how it crosses over to the cars we drive.

Driving: In simple terms, how does the 2014 Red Bull RB10 hybrid system work?

RG: Last year’s car had KERS, an energy recovery system that uses an electric motor coupled to the engine that recovers energy under braking. So rather than using conventional friction brakes to slow the car down, when the driver hits the brakes, torque is put on the electric motor to generate electricity for storing in the battery. When the driver presses a button on the steering wheel, that stored energy comes out of the battery, goes back through the motor and drives the car forward. 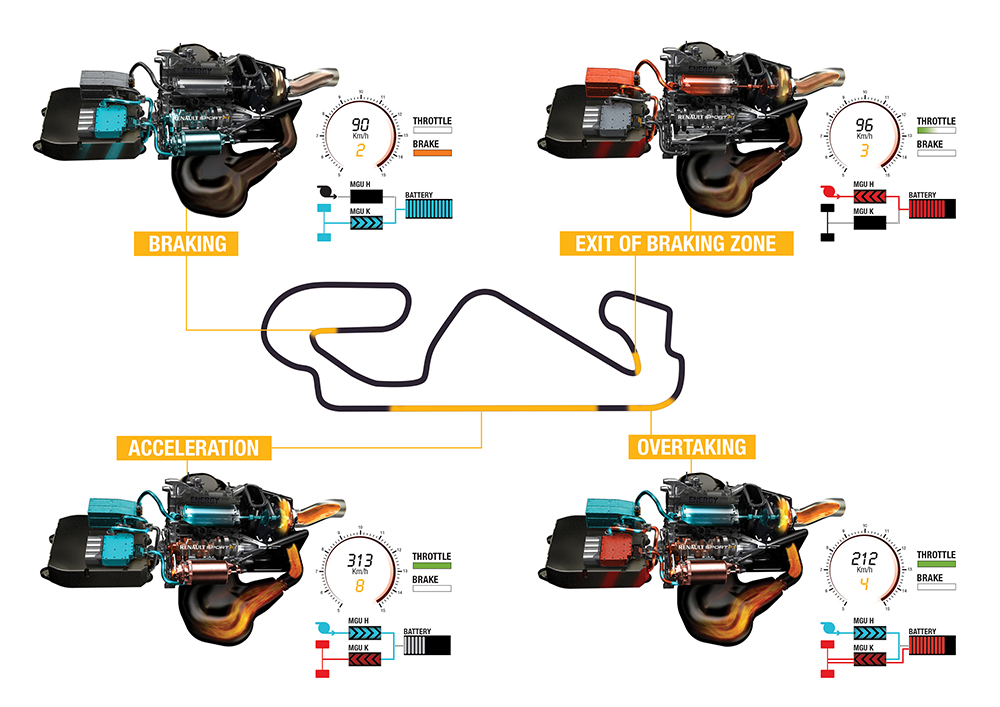 This year we still have the same KERS – known now as ERS-K – but we also have another energy-harvesting system called ERS-H, which is a motor generator connected to the turbocharger. As we recover the waste energy from another source, it means we have more energy to release on track.

Driving: Has the electrification of F1 been an exciting thing to get involved in, or a massive headache?

RG: Both. As an engineer it is undoubtedly interesting because it is a load of new toys to play with, new challenges, new things to make work and new problems to solve, and that is what we do. But at the same time it has been a massive headache because there have been so many problems to solve, and it has felt like we have a mountain to climb.

Driving: Red Bull Racing works with Infiniti as well as Renault. How much of that effort trickles down to road cars?

RG: I think it’s one of those things where, if you asked, “How many of the actual components would make it on to the next Renault?”, the answer is probably zero. However, if you asked, “Has what we’re doing in F1 benefited the road cars?”, the answer is, undoubtedly, yes. This is because – and you saw this with KERS as well before we got into this new system – the rev-up that F1 has given the suppliers, who provide the electrical machines and electrical components, has been quite significant. 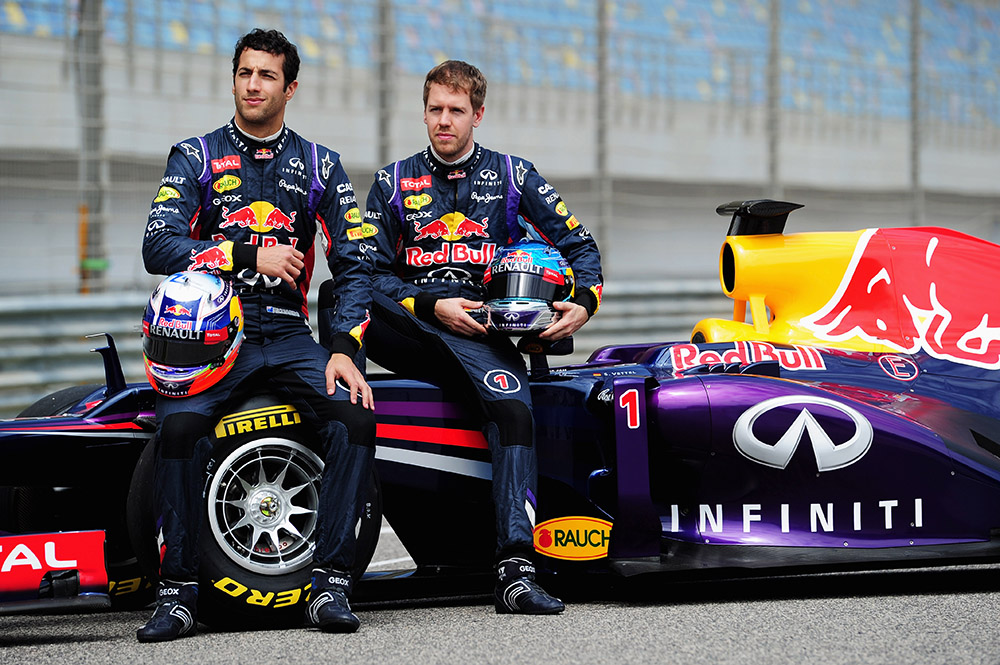 These companies weren’t used to working the way we work. I think that the battery manufacturers, and other very conservative industries, have realised that F1 can bring something to them. Our involvement has helped speed up their development processes and made them push the boundaries. So I feel that, while specific components won’t necessarily find their way into road cars, we’ve undoubtedly improved the technology and the suppliers’ processes, which will benefit them.

BF: You can also draw direct parallels between how the F1 car works and how the road car works. So when you were talking about ERS-H, plainly, on a Renault Zoe electric car there is no exhaust pipe and there is no turbo, so there is nothing you can really gain. But like ERS-K, Zoe, too, prioritises engine braking, applying torque to the electric motor to slow the car down, over friction braking. It is trying to regenerate as much energy from braking to be stored in the battery as it can. It’s these things that the two cars, road and race, share.

Driving: Hybrid systems are now found on even the latest hypercars; the Ferrari La Ferrari and McLaren P1 use systems based on KERS from F1. There’s the Porsche 918 Spyder plug-in hybrid and now the Mitsubishi Outlander SUV has gone that way, too. Would you say what is happening in F1 today is a reflection of what is happening in road cars, or is it the other way round with the sport being a testing ground for road car technology?

RG: The rules have changed to help F1 stay relevant. You have to ask: if Renault is going down the route of making the Zoe and other electric and hybrid vehicles, why would it spend money with us on racing if we are racing V8s in 10 years’ time? That is why we have gone in this direction.

Driving: Renault’s electric cars are all pure-electric. We’re talking hybrids when it comes to F1, but is it inevitable that the sport will go pure-electric? We have the Formula E electric series starting soon. How relevant will F1 be in 10 years’ time?

RG: I can’t see F1 going all-electric and I’d be surprised if all-electric becomes the sole solution for road cars, because of what Ben said earlier about different people having different needs. 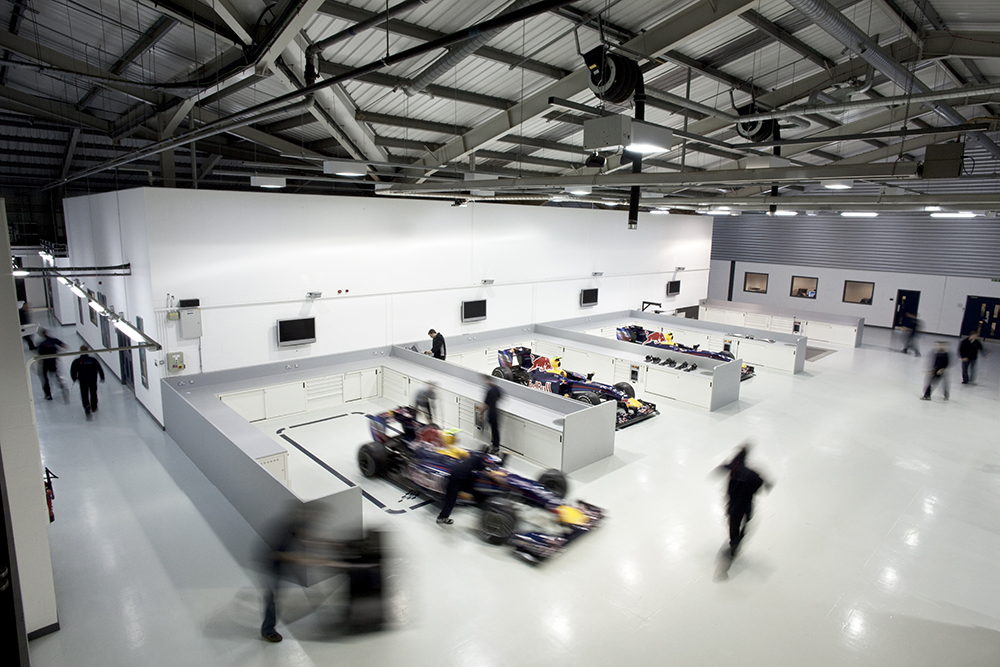 It depends on where the technology goes because at the moment, for F1 to be all-electric, we’d need a radical breakthrough in battery technology. You could have instantaneous charging, so you get to the pit stop and recharge in the time it takes to change the wheels, or a massive increase in the energy density of the batteries so they can package all the energy required into the space previously used for the fuel tank. Neither of these things is going to happen overnight.

Driving: Can you see F1 cars having plugs at any point? Or battery swapping?

RG: I’d have to say, “never say never” but it is certainly not on the horizon at the moment. I think it’s important to recognise the steps that have been made in F1 this year in that we’re using a third less fuel on average, per race, than we were last year, which is a pretty huge improvement.

Driving: Do you think the majority of fans care about fuel economy in F1?

RG: I’m not sure. It goes back to this idea of keeping it relevant, to keep the sport going. If the sport becomes irrelevant and a dinosaur, it won’t survive. At that point, the fans would care about fuel economy.

Driving: Do you think initiatives such as the new Formula E pure-electric racing series and the electrification of F1 are helping change perceptions about electric and hybrid cars? 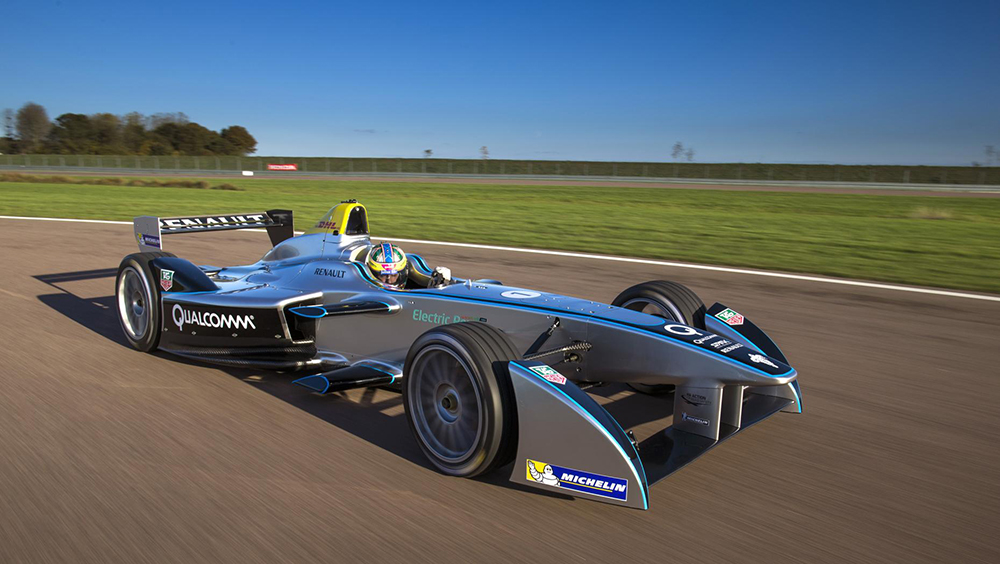 BF: I think the public still believe that electric vehicles don’t fit their everyday life and don’t offer equivalent performance to an internal combustion car, or are too expensive; all that sort of thing. As an industry we’ve got a lot of work to do, to show people that this is not the case and that electric cars are as relevant and capable as conventionally powered vehicles. I think that Formula E is a great opportunity to show what’s possible with an electric vehicle.

Driving: What’s your view on how quiet this season’s F1 V6 turbos are?

RG: I think when you stand on the pit lane, they still sound very good. The noise is almost more interesting than before, because you can hear all sorts of other things going on. For example, when the cars come into the pits you can hear the turbo spinning down, and you can hear the electrical machines kicking in on braking. TV doesn’t pick it up so well, and certainly the on-board noise sounds pretty poor. It’s a shame because when you are at the circuit, they still sound very interesting.

Driving: Quietness has also been an issue with electric road cars… 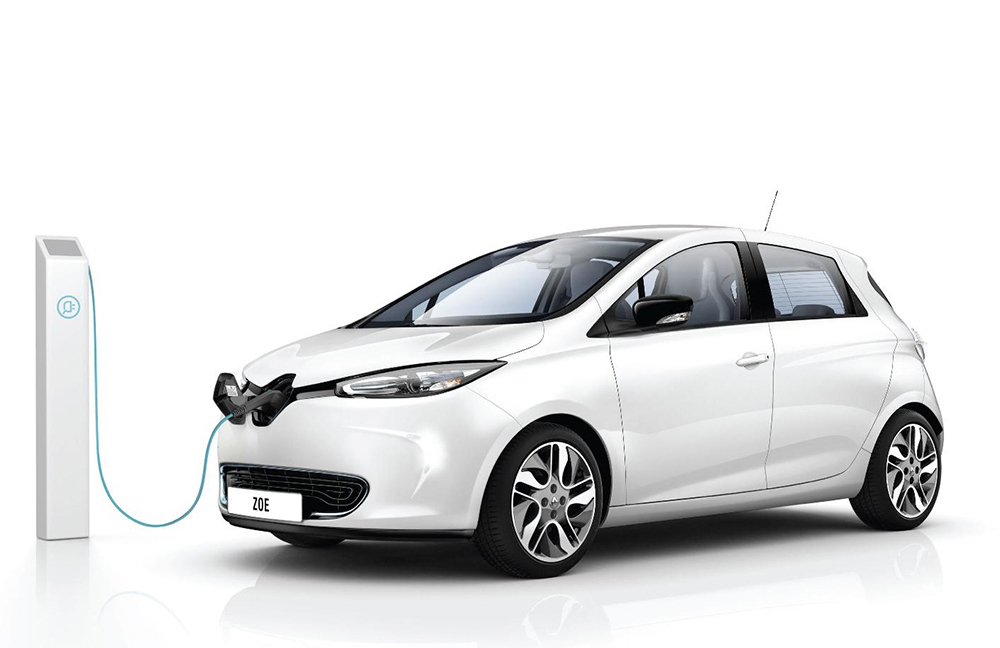 BF: It’s being discussed at the moment in Europe. Zoe has Z.E. Voice, an artificial noise it produces at speeds up to 18 miles an hour to warn pedestrians it is there.

It’s been designed as a noise that will make you stop and make you look round, because otherwise there is no point having it. But it has also been designed to be unobtrusive. There is a lot of work still going on.

With thanks to Pod Point, Renault, Red Bull Racing and Renaultsport F1.