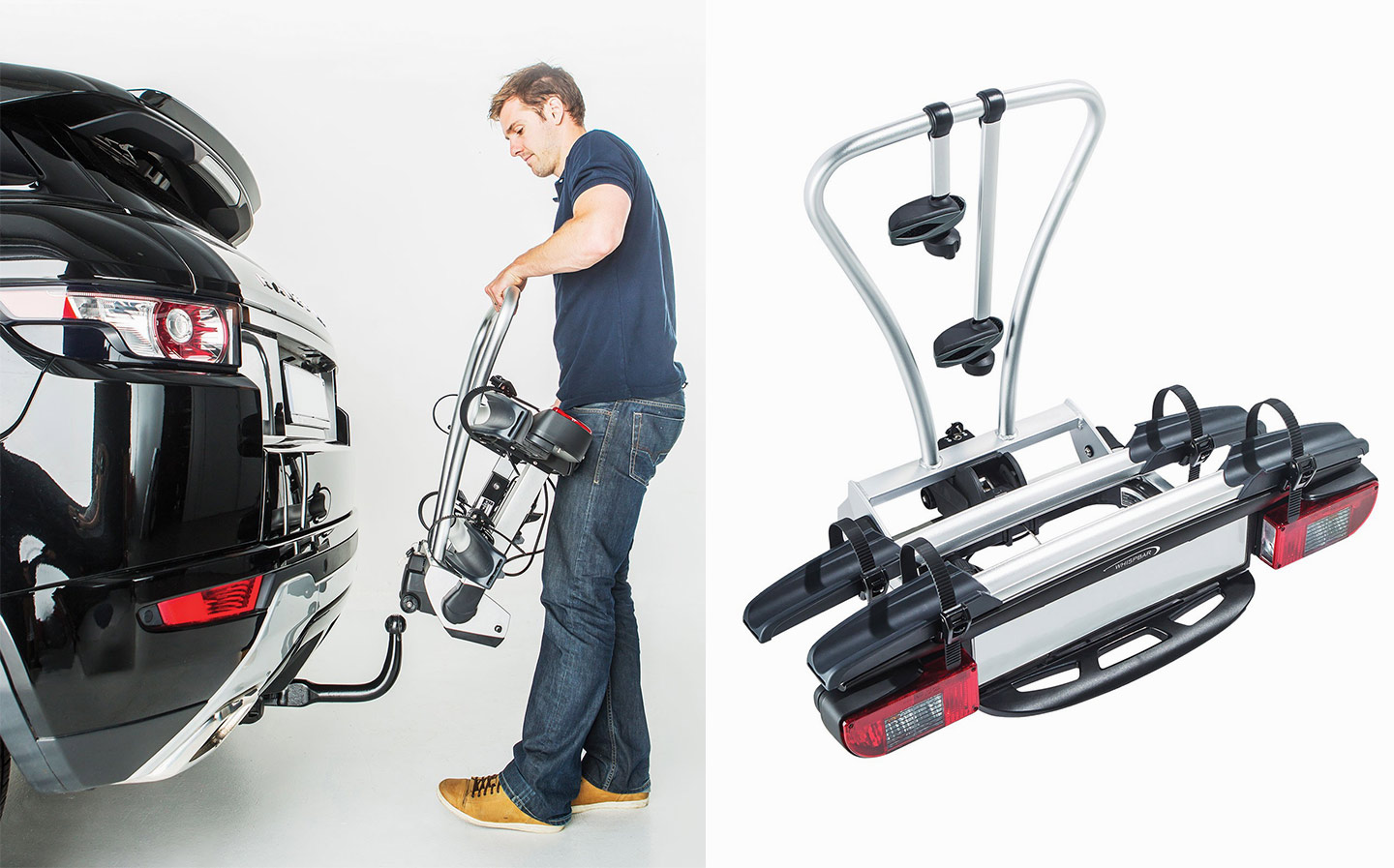 THERE ARE a few ways to transport bicycles by car: on roof racks, on a boot-mounted rack or, as tested here, on a towbar rack.

There are advantages to a towbar bike rack. The first is that it leaves room on the roof of the car for more cargo, such as additional bikes or, if you’re heading off on holiday, additional storage via a roofbox. The racks tested here also pivot away from the car when you need to get into the boot, without having to remove the bikes; a really handy feature if you need emergency access to baby wipes, for example (parents will know what we mean).

Other advantages over carrying bikes on the roof include less drag through the air, and therefore reduced impact on fuel economy, and convenience in terms of putting the bikes on and taking them off; you don’t have to lift them so high.

The idea of a bike rack that sits on a towbar can seem daunting, though; our first thought was, “Doesn’t it just slide off the ball?” We were so anxious about this the first time we tried one, we couldn’t stop checking the rear view mirror every couple of seconds to make sure the cargo was still safely attached, and not dragging along the asphalt behind the car.

Eventually, though, the fears subside and you learn to trust the products, allowing you to get on with the important business of keeping your eyes on the road. All three of the two-bike racks tested here offered sturdy connections to the towbar, when installed properly.

Things to consider before you buy a towbar bike rack

The most important things to consider with any towbar rack are the weight of the rack and what weight it can carry, and the maximum load weight of the vehicle’s towbar. Generally the racks should be able to carry two adults bikes without an issue, but if you have two electric bicycles, they will be unusually heavy and you’ll need to ensure their combined weight can be handled by the rack, and that the towbar can support the weight of the whole lot. Consult the vehicle and towbar manuals, and if required check the bicycle manufacturer’s technical specifications.

You will need a separate registration plate made up for the carrier. Halfords can make up some numberplates for you, online or while you wait, for very little money. Drivers need to be able to prove that they are the registered keeper of the vehicle.

Finally, you’ll need to connect up the lights on the rack to the car’s 12V lighting system via its towbar power socket. There are two types — 7-pin and 13-pin — so you’ll need to buy an adapter if the carrier’s plug doesn’t fit the car’s socket. You can pick one up for less than £15 at Halfords. 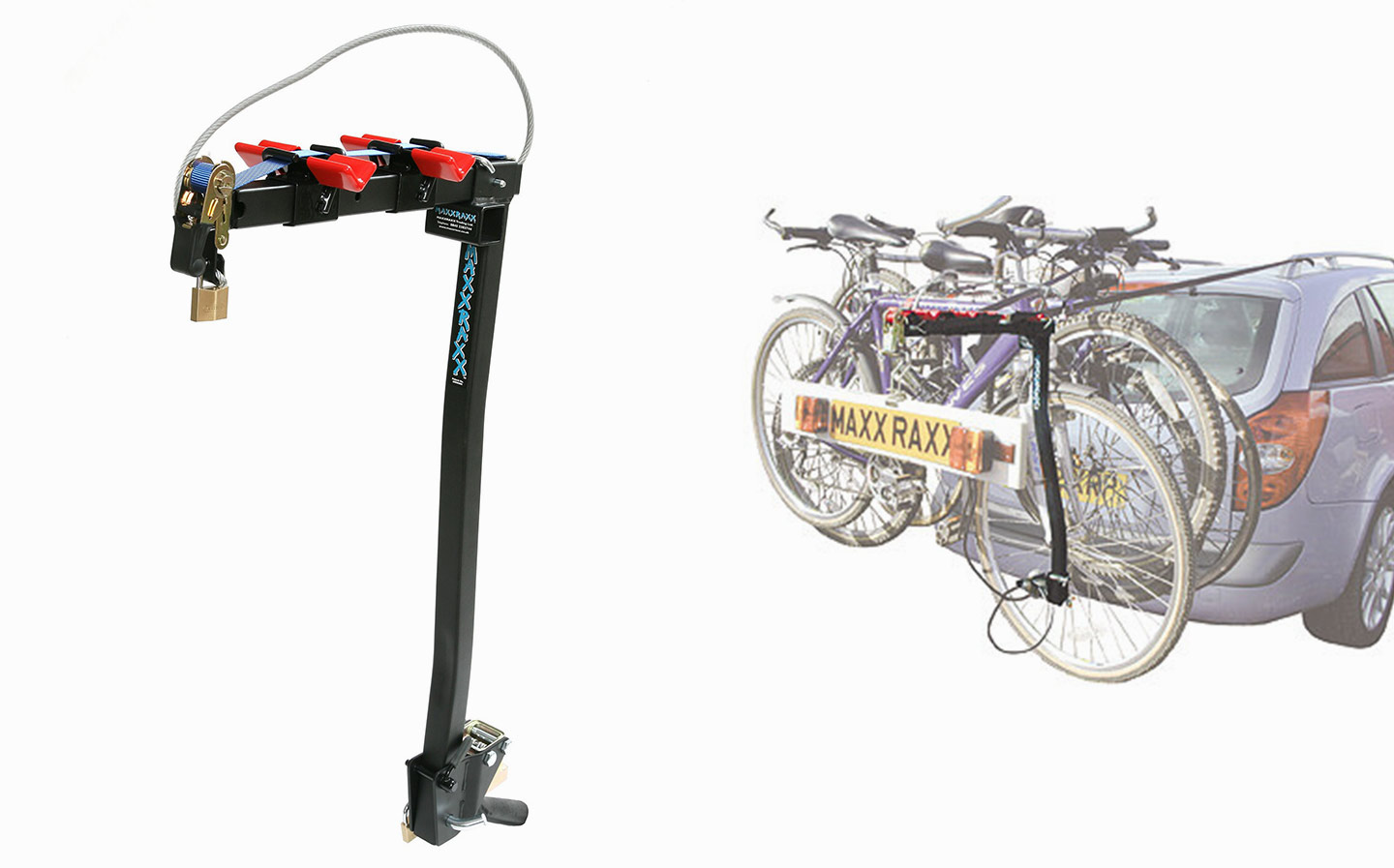 This offering stands apart from the others tested here as the bikes hang from a beam rather than sit on a platform. It also comes with quite a few components that require assembly, and rather complicated instructions in several parts (you have to jump from one to another and back again at various stages). 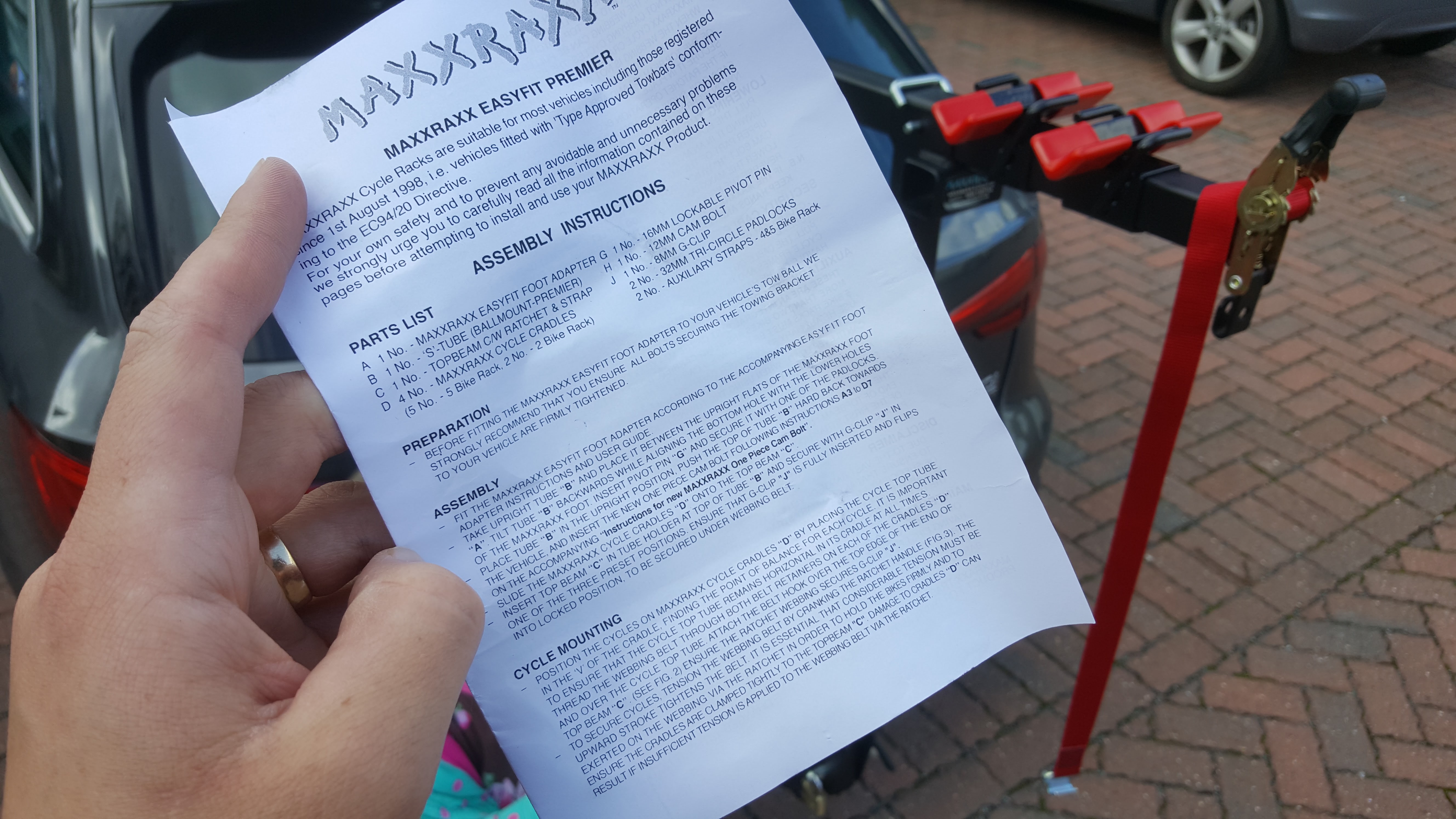 After doing this once, it’s not too tricky to dismantle and reassemble, and it packs up neatly into a kitbag (sold separately, £29.95); the biggest advantage of the MaxxRaxx is that it is very compact and easy to carry when packed away.

However, once assembled and attached the bikes feel less secure than with the others tested here and with ladies’ bikes, which don’t have a horizontal crossbar, the frames end up at and awkward angle with one wheel pointing toward the sky. 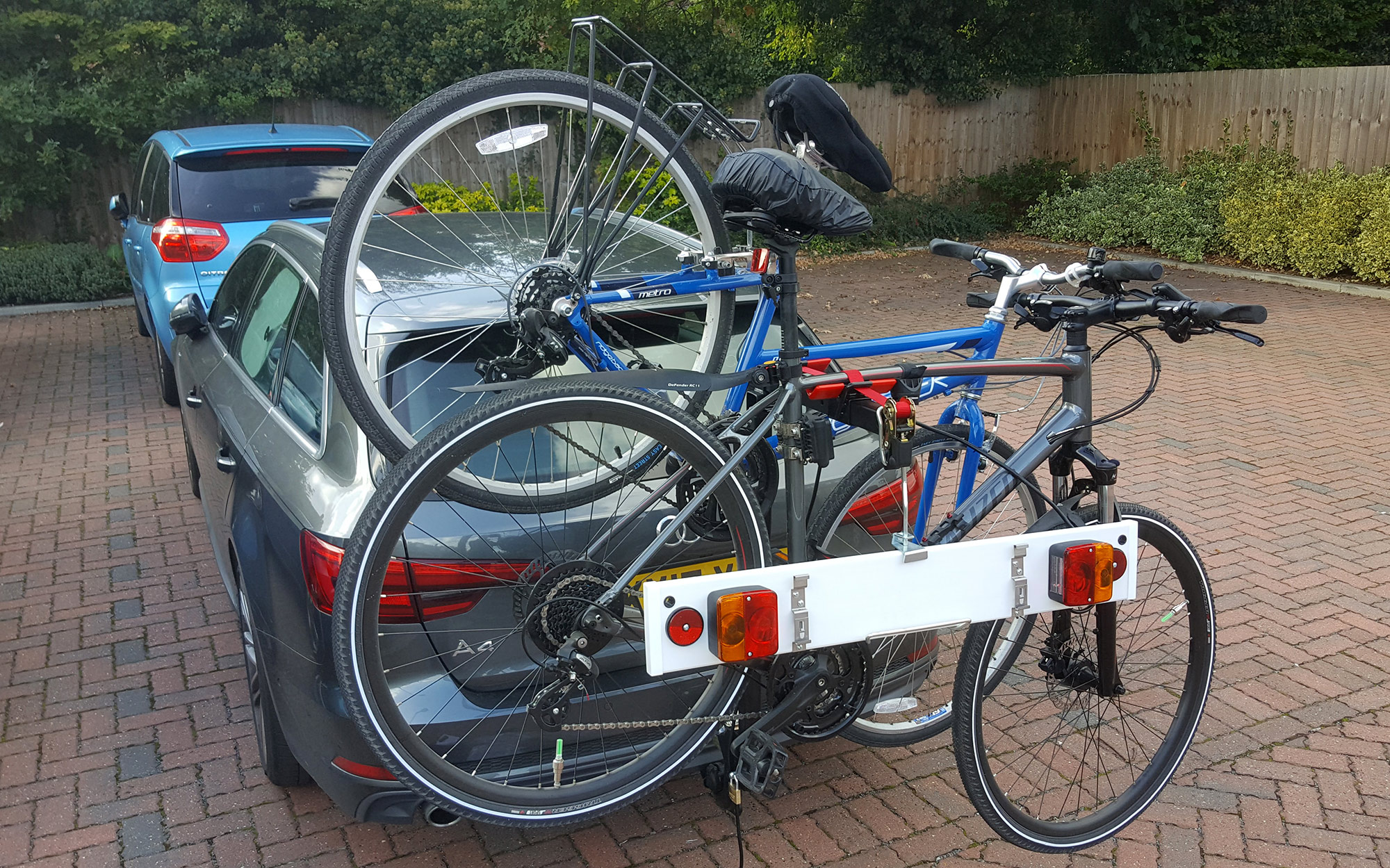 Loading a ladies’ bike onto the MaxxRaxx results in it being carried at an awkward angle, while the lighting rig looks naff

Also, while it can be tilted back for access to the boot, the bikes tend to pivot somewhat as they’re only connected to the carrier at a single point, and any exposed brake cables or brackets can be pinched by the holder.

Once the bikes are on you then have to connect the lighting board and bracket (sold separately, £29.95), which looks pretty naff. And the locking mechanism is as simple as a pair of padlocks.

It’s a less polished product than the Thule and Whispbar (reviewed below) but is the least expensive. Thule also sells similar sorts of hanging racks for less money and with discounted prices currently offered for its rivals, the MaxxRaxx Voyager is the least attractive proposition we tested. 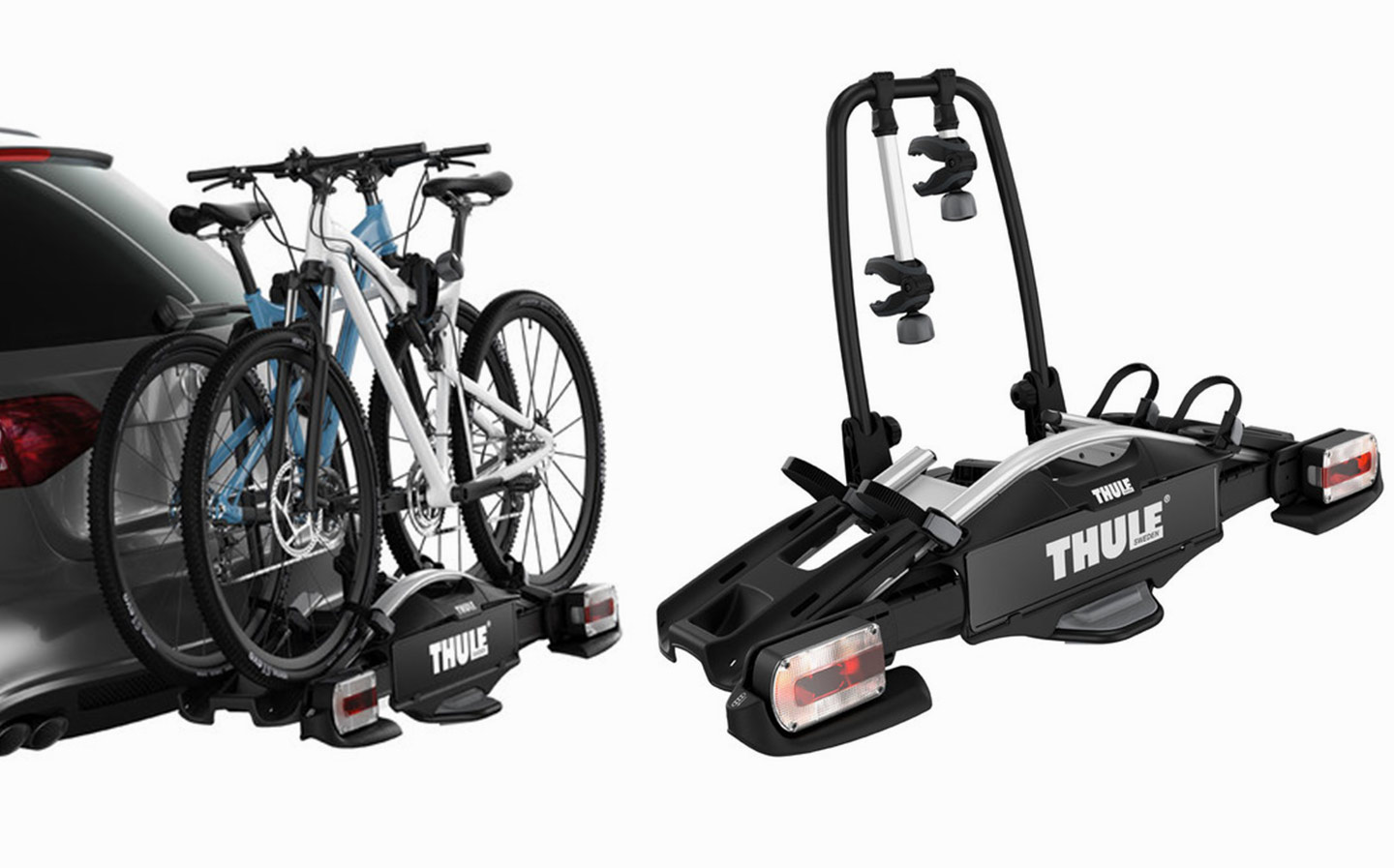 Thule is one of the best-known makers of roofboxes and bike carriers, and for good reason: the products tend to be robust, attractive and well engineered. The VeloCompact 925 is no exception. 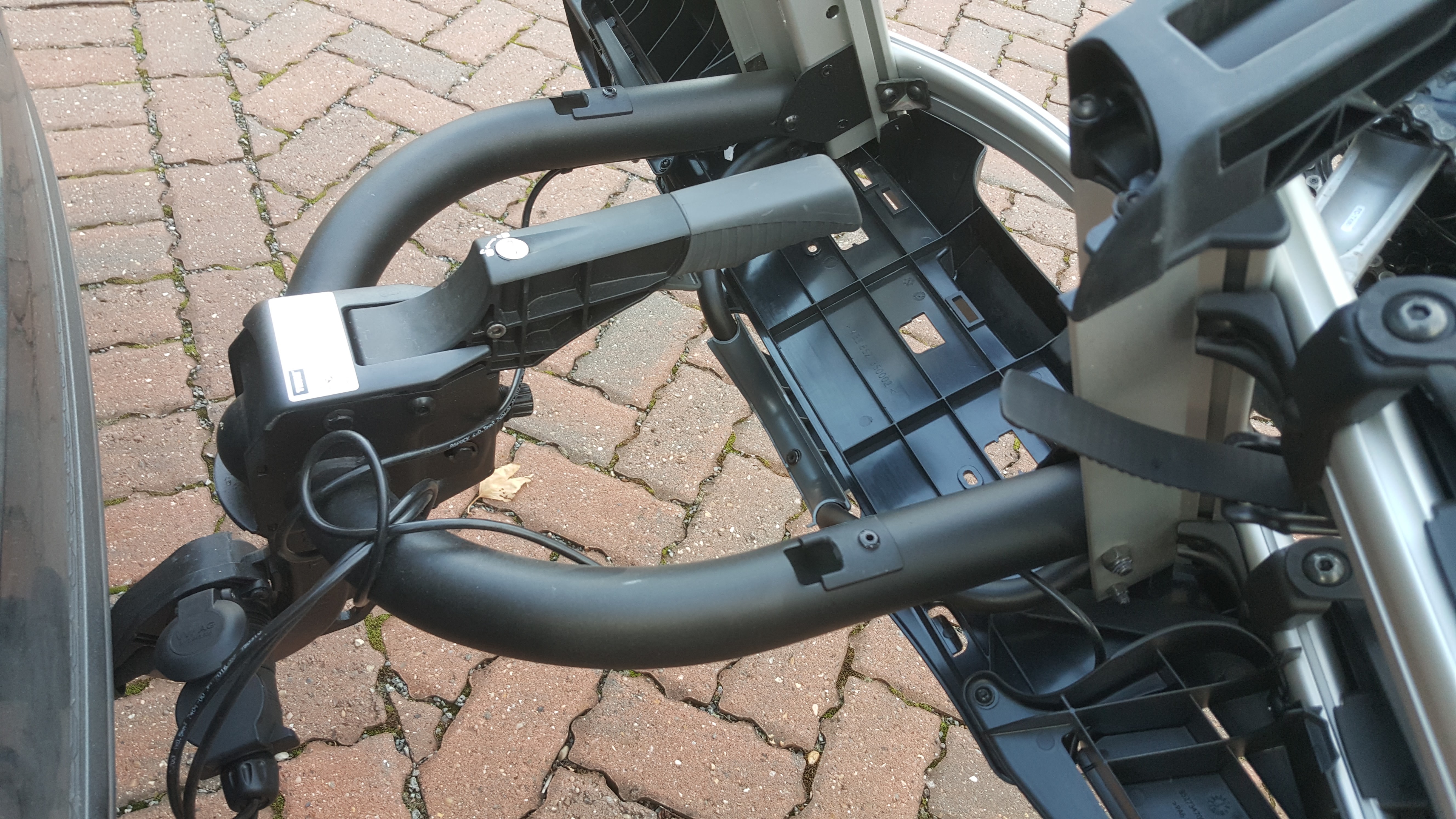 The Thule attaches to the towbar via this locking handle.

To attach to the towbar you slot it in place and then clamp it on by pushing down a handle, which can be locked with a key. The tension of this can be fine-tuned via a dial so that it’s not too loose but also not too difficult to clamp.

The upright bar folds up and then slots down into a couple of eyelets, before securing in place with two screw dials either side. You then slide the lighting clusters out to their widest positions.

The two bikes are then attached by sliding out the plates to the desired width before clamping the frame via the extending arms, then fixing the wheels in place with plastic tethers that pass through the wheel rims and then ratchet down for a solid hold. It took a few goes to get the bikes in the ideal positions (we found that they fitted best facing in opposite directions, and we needed to adjust the height of one of the saddles), but once you’ve got it sorted, loading and unloading bikes takes just a few moments. 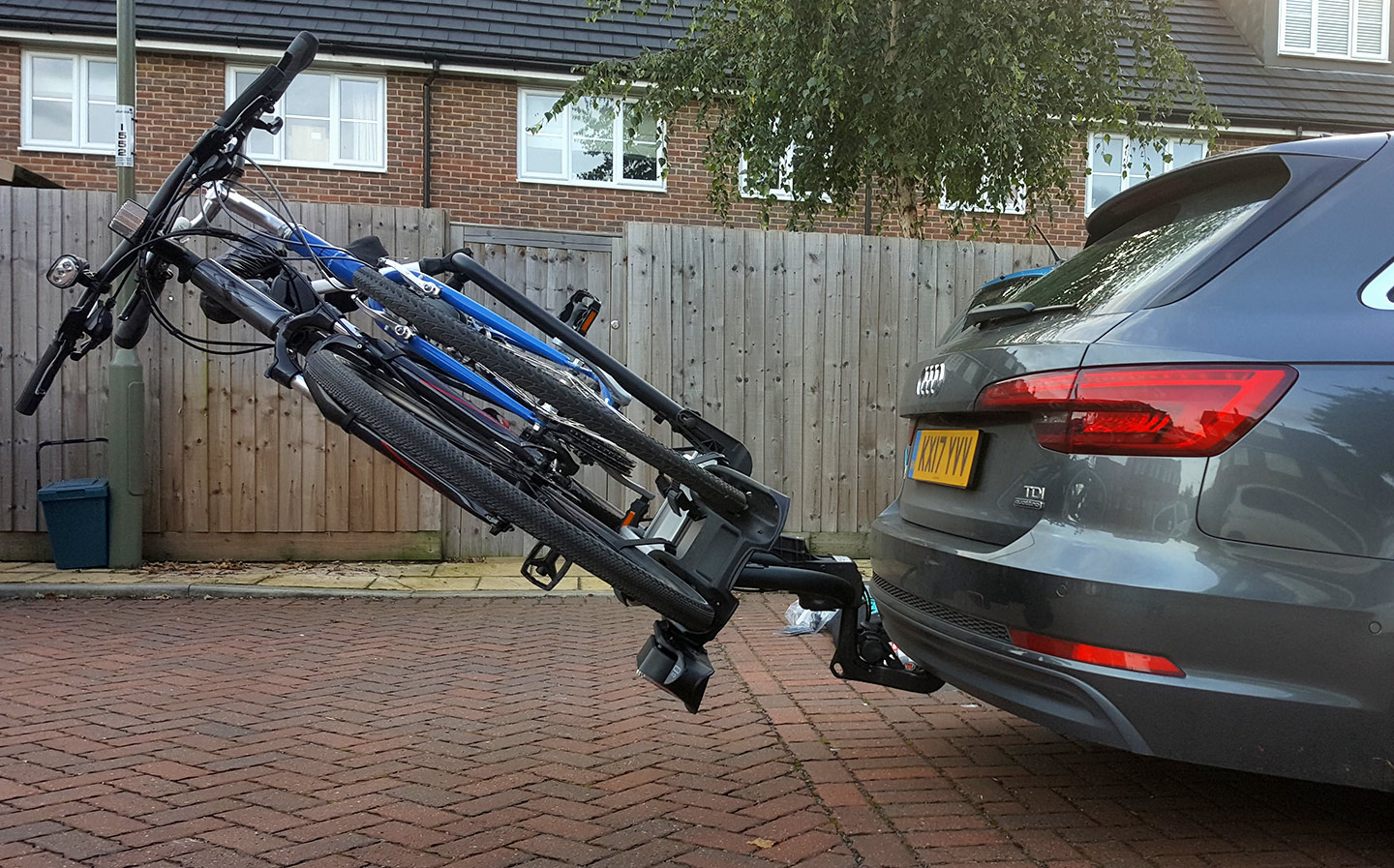 As with the other carriers here, the Thule can be tilted back to allow access to the boot.

The whole carrier can be tilted back, with the bikes attached, if you need access to the boot, by pushing down on a step under the numberplate. It’s an excellent feature that we used regularly.

It’s worth noting, too, that the VeloCompact was secure on motorways at speeds of up to 70mph.

A very smart bike carrier built using lightweight but sturdy materials. It can’t match the Whispbar (below) for load capacity or ease of use but it comes at a more reasonable price. Highly recommended.

Whispbar isn’t as well known in the UK as Thule but on the evidence of the WBT21, the New Zealand company is a serious rival.

On the surface, it is very similar to to VeloCompact 925, in appearance and function. It too has a strap mechanism for the bike wheels as well as locking clamps for the bike frames, but the straps seem even sturdier in design and the arms are slightly more attractive in appearance. 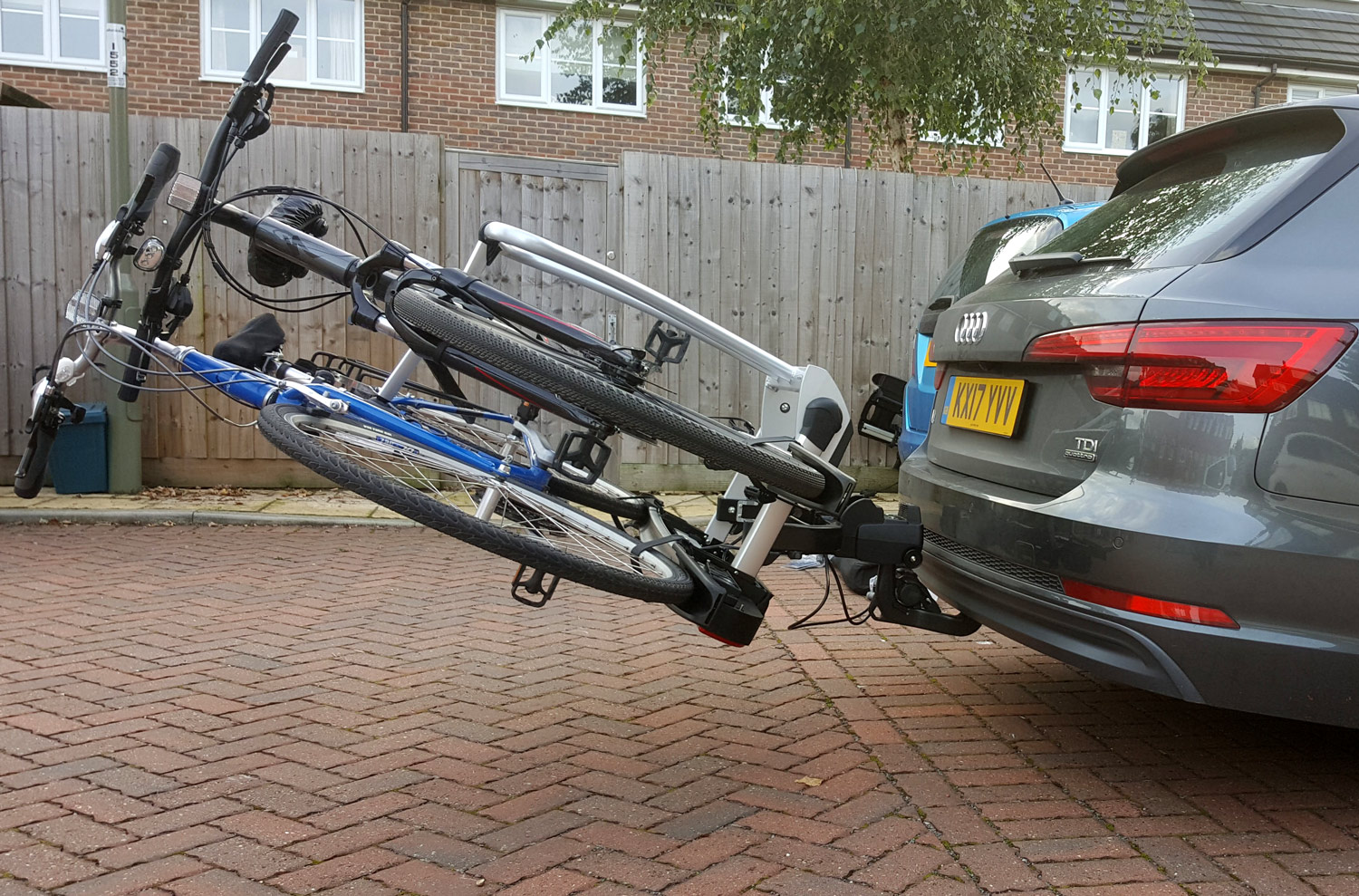 The Whispbar’s tilting mechanism is superior to that of the Thule Velocompact.

The fundamental design difference between the two products, though, is in the fitting and tilting mechanism: the Whispbar is easy to place onto the towbar and then the action of raising the upright frame locks it in place; it’s much smarter than the Thule’s. As with its rival, the Whispbar tilts backs with a push down on a step under the numberplate, although the Whispbar’s is wider.

There’s also a difference in terms of the load capacity: the Whispbar can handle 60kg — 14kg more than the Thule — but you pay for the extra strength in overall mass: the WT21 is 3kg heavier.

A match for its Thule rival in quality, it can carry heavier loads (assuming your towbar can handle it) and is arguably easier to use. However, this strength comes at the cost of extra weight, making it a little trickier to lift and will mean extra load on the towbar. It gets five stars as we were so impressed overall, but the price difference over the Thule makes it hard to recommend over its rival.