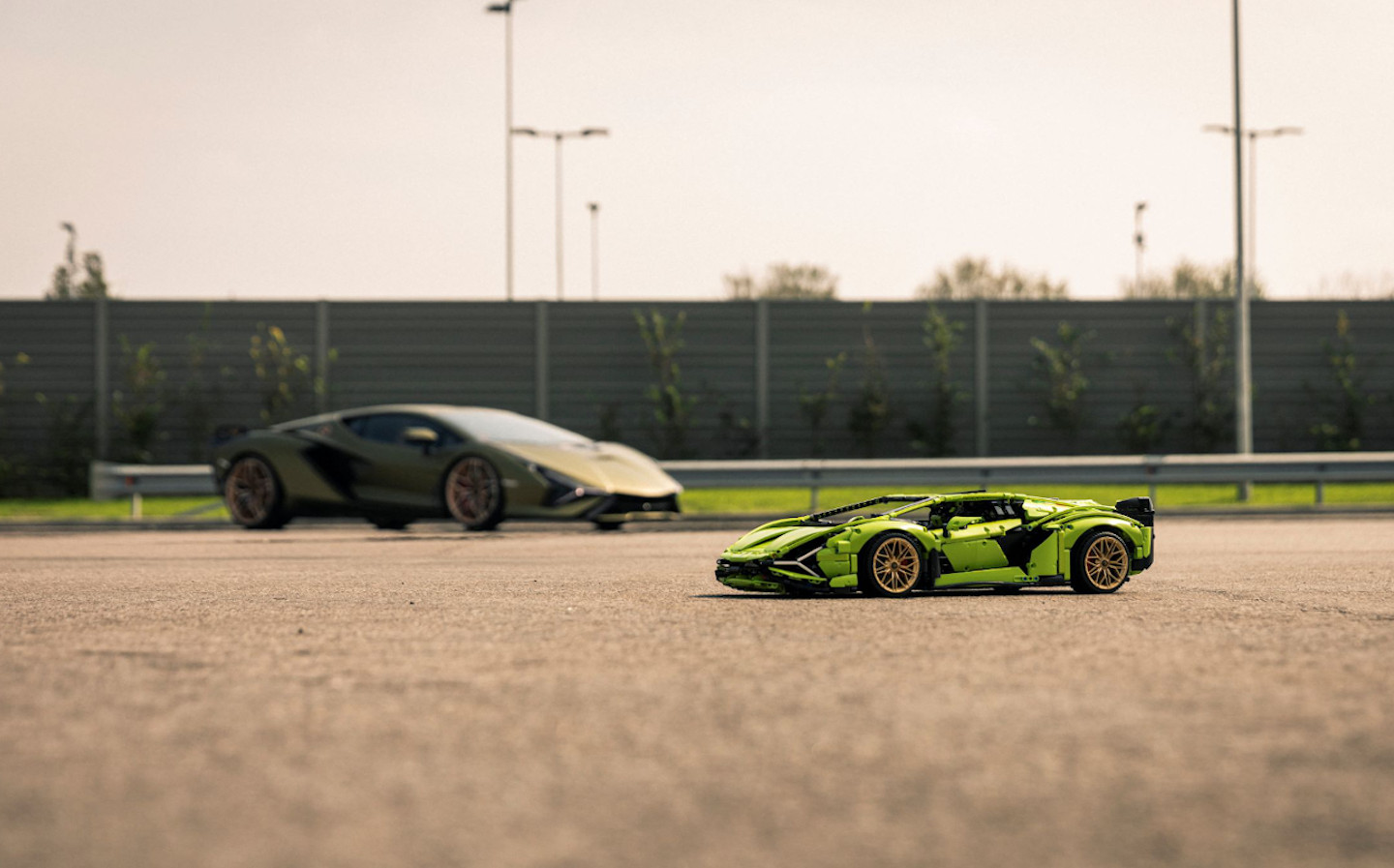 LAMBORGHINI’S head honchos have made it clear that we shouldn’t expect a new addition to its model line up until the middle of the decade, meaning that superfans of the supercar maker might be twiddling their thumbs right now. However, a collaboration with Lego might provide some respite, as the two companies announce the release of the Lego Technic Lamborghini Sian FKP 37.

The 1:8 model, which comprises 3,696 pieces, comes with features including Lamborghini’s scissor doors, a fully functioning eight-speed sequential gearbox (triggered by a functioning flappy paddle) and a rear spoiler activated by a button in the car’s cockpit. The Sian comes in lime green, and measures 60cm long, 25cm wide and 5cm tall. That might not sound gigantic, but those dimensions make it one of the beefiest Lego technic cars produced — even bigger than the Bugatti Chiron model launched in 2018.

Lego revealed the model Lambo in a 1:8 scale car launch, wherein all the aspects of a regular supercar launch were recreated using Lego. The spectacle was constructed with the help of a team of Lego builders from China, and the company noted that it followed all appropriate health and safety regulations relating to Covid-19.

The model also includes a miniature recreation of the Sian’s V12 engine. The real car, which was introduced at the 2019 Frankfurt Motor show, uses the naturally aspirated 6.5-litre unit alongside an electric motor (the Sian is Lamborghini’s first hybrid) to muster an eye-widening 808bhp. This means that it can reach 62mph in just 2.8 seconds, and has a blistering top speed of more than 220mph.

The Sian has a bigger power-to-weight ratio than the Aventador SVJ, a car that Jeremy Clarkson called “a howling blend of savagery and craziness” in his review of the car in The Sunday Times Magazine. However, that kind of power is rare – only 63 Sians are being produced.

The Lego model, therefore, is probably a lot safer — although not safe enough to allow children to play with it, as it has an 18+ age restriction. It’s also a hell of a lot cheaper than the real version, which costs a touch under £3m. For a model, though, it’s not exactly cheap, with an RRP price of £349.99, £20 more than the price tag of the Chiron model it succeeds. That’s in keeping with the real car’s price tag though — the extremely rare Sian costs over £400,000 more than the Chiron.

For your money, as well as the Lego components for the build you get a unique box, a couple of collector’s booklets, a Lamborghini-branded overnight bag that fits inside the front hood and a serial number that unlocks special content on the Lego website.

“The Lego brick is an icon in the same way as a Lamborghini super sports car,” said Stefano Domenicali, CEO and Chairman of Automobili Lamborghini. “They both embody the pursuit of design perfection through constant research and development, create different emotions with every interaction, and are valued by generations.”

The Lego Technic Lamborghini Sian FKP 37 will be available in Lego stores and online from June 1.