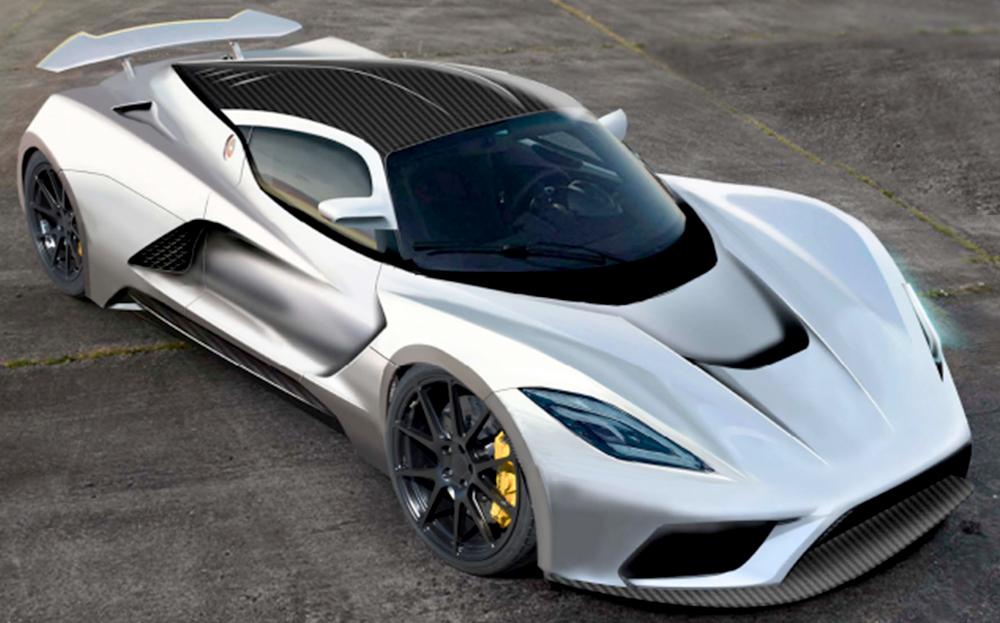 IT CLAIMS to make fast cars faster but with its latest creation, Hennessey may have just made a fast car, the fastest of all.

The Texas based tuning company is preparing a tuned version of its already super-tuned Venom that it says will do 290mph.

Called the Venom F5, after the most powerful tornado on the Fujita scale, it will be powered by the same 7-litre twin-turbo V8 from the “standard” Venom, itself capable of over 270mph, but boosted from 1,244bhp to more than 1,400bhp.

In addition, the Venom’s Lotus Exige-derived body will be made even slipperier and produce greater downforce, while the car’s weight is likely to be below 1,300kg for a power-to-weight ratio comfortably over 1,000bhp per tonne.

Company boss John Hennessey is confident the F5 will achieve its target top speed: “I think something in the 290mph range will be possible,” he told TopGear.com.

The new model is no mere exercise in “who can make the fastest car.” Actually, it is, but it also has some unfinished business to perform: namely, seizing the Guinness world record for the fastest production car from Bugatti.

The company’s first attempt was a year ago when it released a video of a Venom GT achieving a speed of 265.7mph. The company duly stated it was “now the fastest production car in the world”.

When challenged regarding the official record held by the Bugatti Veyron Super Sport and recognised by Guinness World Records, Hennessey said the Veyron should be stripped of its title because the car’s electronic speed limiter had been disabled for its 2010 record attempt. This, said Hennessey, made the car non-standard and that was what enabled it to record an average top speed of 268.68mph over its two timed runs.

When Driving.co.uk asked Guinness about Hennessey’s claim, the company looked into the matter and agreed with Hennessey that the Bugatti should, indeed, lose its crown.

However, in a dramatic U-turn just days later, Guinness reversed its decision.

Undaunted, and clearly thinking it could win the title on its own terms, earlier this year Hennessey released this video (below) of its Venom supercar reaching 270.49mph, and promptly claimed the crown for itself again.

However, the Venom had performed just one speed run, rather than the two demanded by Guinness, and in any case, its attempt had, once again, not been witnessed by the record company’s observers.

As a result, the Bugatti Veyron Super Sport continues to hold the record of fastest production car, with an average speed of 268.86mph. Now it is the job of the Hennessey F5 to unseat it.

To make sure the new car qualifies, Hennessey will make more than 30 examples of the F5, each costing a very untypical production-car figure of around £1m.

John Hennessey is keen to validate the F5’s top speed as soon as possible, and has identified the Bonneville salt flats in Utah as the place to do it.

Now all he has to do is build the car, invite the people from Guinness… and remember that it’s two timed runs, not one.