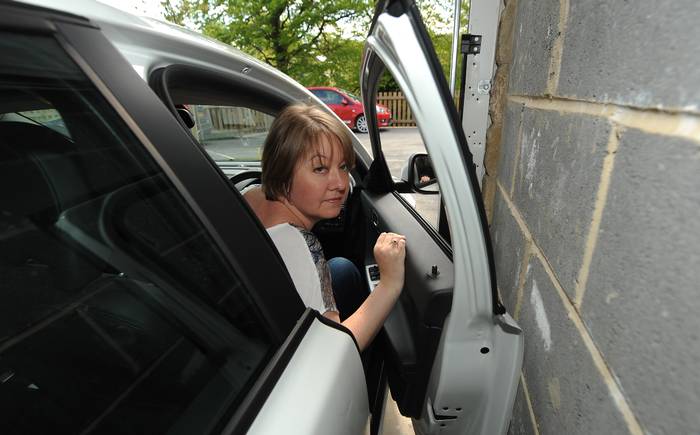 WHEN IS a garage not a garage? When you can’t park your car in it, according to one homeowner.

When Claire Walker, 37, tried to park her car in the garage of her brand-new, detached home in Huddersfield she found that the entrance was only just wide enough and that once inside, she couldn’t open the car’s doors to get out.

Walker had just 1cm to play with between her 2m 2cm wide Volvo S40 (including wing mirrors), and the 2m 3cm wide entrance to her garage. But having squeezed through the gap  she found that inside, the garage was just 2m 44cm wide, barely enough to allow her to open the car’s door, let alone get out of the vehicle.

“It’s not fit for purpose,” said Walker. “The garage doesn’t do what a garage should do. I’m fuming about it.”

Walker moved into the house in March but only discovered the problem when she cleared out some belongings from the garage. Neighbours she spoke to hadn’t realised the problem because none of them had tried to park their cars in their garages.

They are not alone. Kevin Blunden of the Association of Building Engineers, said recent research showed that only 30% of garages are used to store cars.

Walker has since measured other similarly sized cars to see if they would fit her garage. Among the most popular models, the Ford Focus was too wide for the entrance but the Vauxhall Astra was just wide enough. However, once inside, she calculated that it would not be possible to open the Astra’s door.

Persimmon Homes, who built the £210,000 property, said the dimensions of the garage were governed by the size of the house and the planning regulations, and stated in the brochure. A spokesman said the company is working with Walker to try and resolve the situation.

House builders say there are no guidelines regarding the size of garages. Instead, dimensions are governed by how much space a developer can afford to allow.

Steve Turner of the Home Builders Federation said: “While ideally developers would provide large garages in all instances, there are huge pressures on the size of homes built in this country, such as land availability and cost. The sizes of garages vary from development to development and customers need to assess and decide what type suits their needs.”