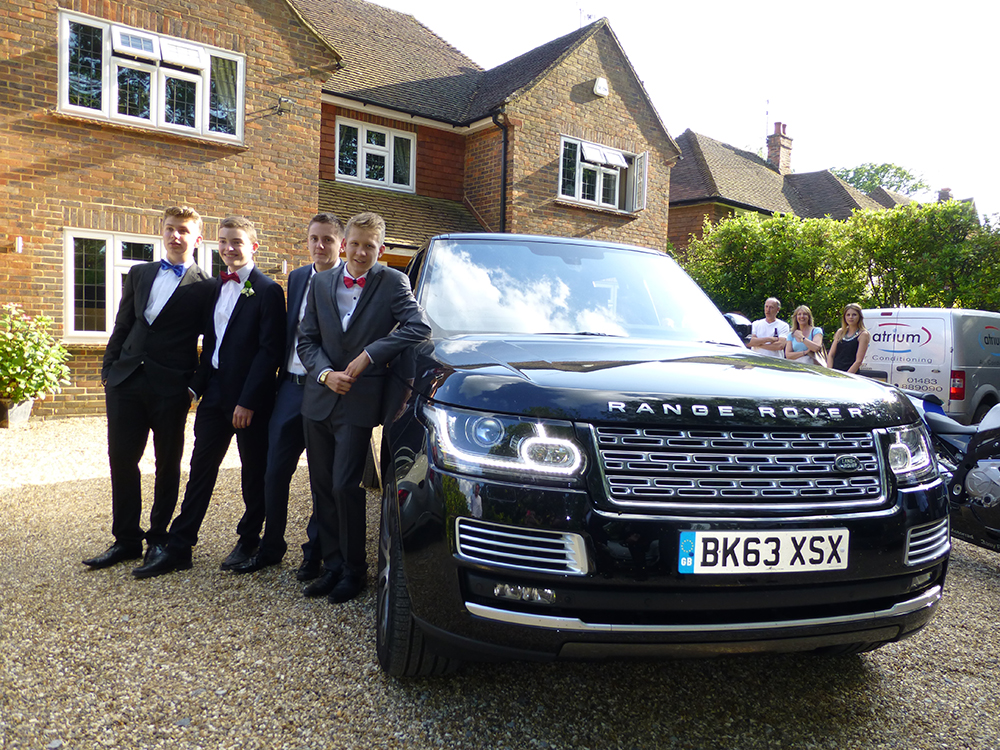 YOU MAY think it’s for carrying captains of industry from airport to office, or celebrities from hotel to stadium but believe me, the Range Rover LWB Autobiography Black was, first and foremost, made for carrying three 16-year-old lads to their high school prom. I know – I was their driver.

Today’s school proms are serious affairs, inspired by TV shows such as My Super Sweet 16 and Big Fat Gypsy Weddings featuring youngsters partying like zillionaires. So popular are they that even primary school children and, according to some reports, nursery schools are having them.

Of course, every successful prom needs a venue, a disco and hordes of youngsters dressed to the nines but the most important ingredient is the cars the kids arrive in and on this, the rule is simple: the flashier the better. 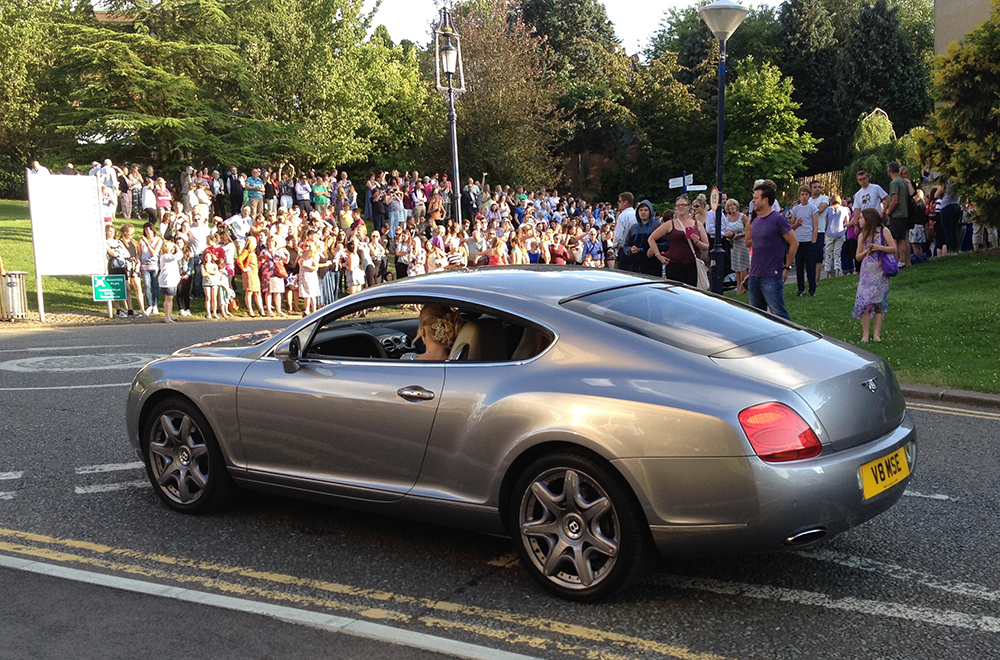 Surrey Limo Hire, a company that hires out cars for weddings and social events, says a stretched Hummer is kids’ number one limo of choice, followed by Bentleys, Ferraris, Range Rovers and Maseratis. Depending on the car, a typical evening’s rental, comprising drop-off and return, costs their parents, who club together to pay for it, from £300 to £800.

“The school prom season has got seriously busy in the past five years,” said Susan at SLH. “The parents book the cars months in advance but it’s the kids who tell them what they want.”

Which is how I came to be driving three excited lads to their high-school prom in a Range Rover LWB Autobiography Black. Weeks before, they had identified the big Rangie as their prom limo, guessing that its sheer bulk, exclusivity and sinister good looks would rival anything their mates chose.

When I presented the £105,800 statement to the lads on proms night itself, they were awed by its size and scale, its impenetrable privacy glass, its smooth-as-glass finish, its whopping great wheels and its confident good looks. They rushed around to the side of the car to peer into its luxury interior. Their reaction wasn’t what I expected.

“It’s a four-seater, and there are four of us plus you,” said Max, my son.

He was right. The second row had two seats, beautiful, multi-adjustable things each with their own TV screens and an electrically powered table that emerged from the giant centre console separating them. But three seats they were not. 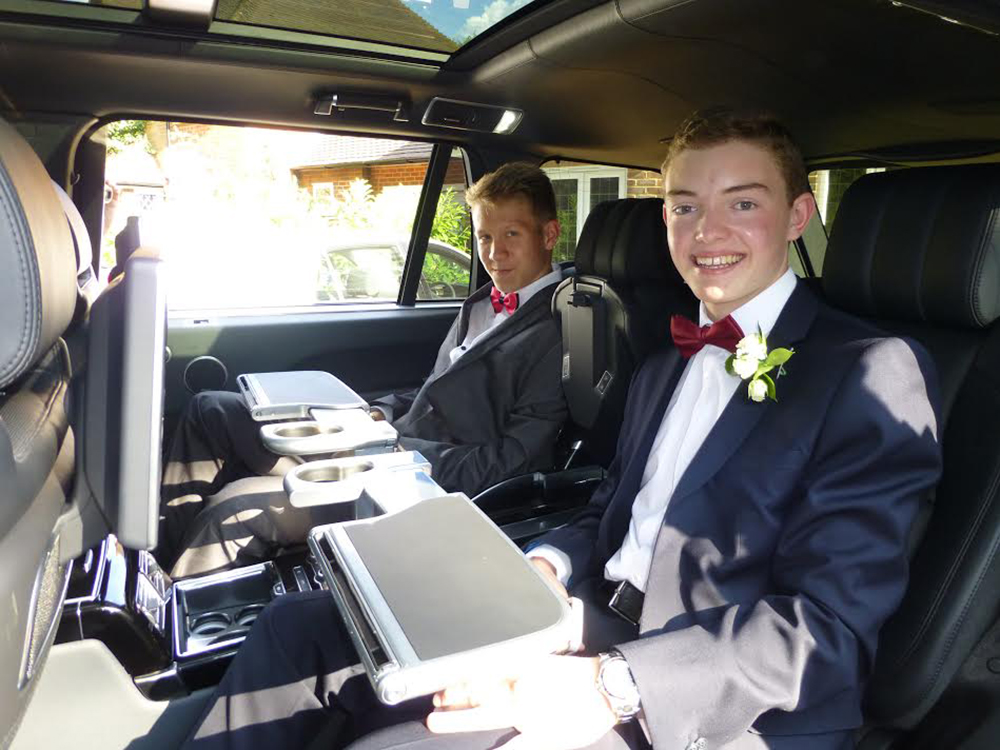 I left the boys to decide who would not be going to the Prom in a Range Rover LWB Autobiography Black. It was a decision reached not by consent but by an unruly race to be first to occupy a seat.

Max, Ronan and Connor were successful. Alas, poor Olly was not. We agreed I’d meet him and his mum down the road from the venue, in the grounds of Surrey University in Guildford, and he would somehow install himself in the Range Rover. At that stage I wasn’t sure where he’d sit but at least we’d be on private land and moving at crawling speed in a mile-long convoy of stretched Hummers.

We set off, followed, incidentally, by another lad in a DJ riding pillion on his brother’s brand-new BMW 1000RR motorcycle. Thanks to its air suspension, the Range Rover floated over the bumpy Surrey lanes, wafting us to the Prom on a whisper of throttle, its 503bhp supercharged 5-litre V8 sipping fuel at the rate of 22 miles to the gallon (fortunately, the prom was six miles away). 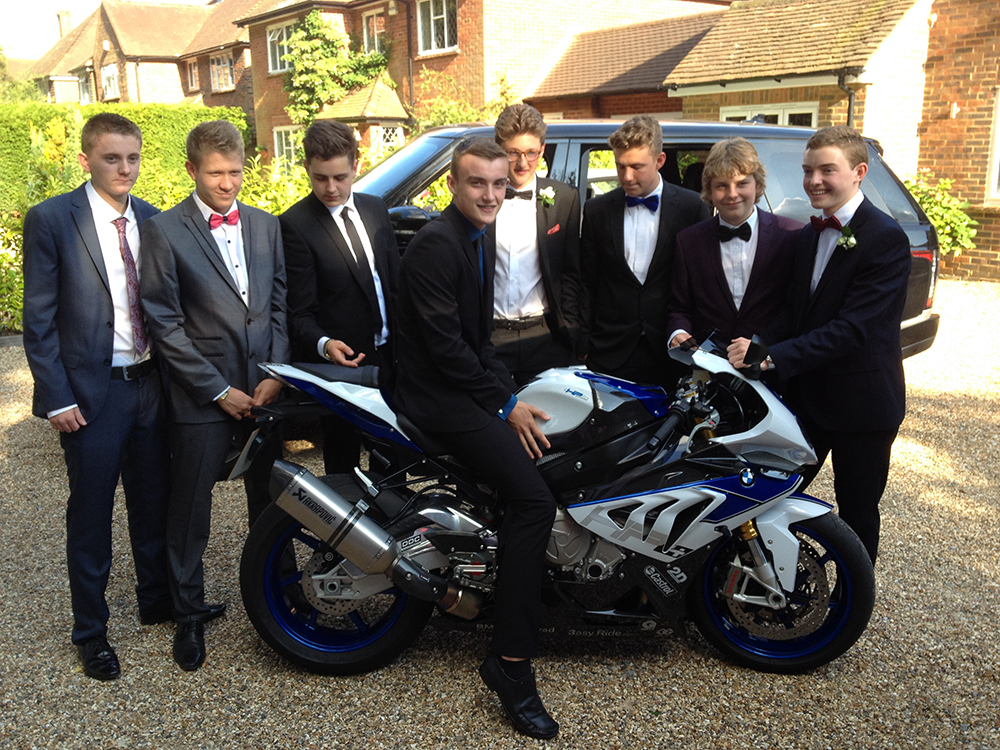 The lads busied themselves with the on-board toys: the TV, the powered tables, the reclining seats (the LWB’s additional 7.3in of rear seat legroom have enabled an extra nine degrees of backrest recline) and the electric sunblinds.

They left the ride-height control in auto but I did rotate the gear selector to Sport and, working the shift paddles like an accordionist, roused the 2,413kg Range Rover from its slumbers. Officially, it can sprint from 0-62mph in 5.8 seconds but more impressive still is its in-gear acceleration thanks to the 461 lb ft of torque that arrives like a hammer blow with each stab of the throttle.

Needless to say, the lads were impressed;  Max by the performance, Ronan by the panoramic sunroof and acres of space, and Connor by the seats and the dinner table-sized centre console. 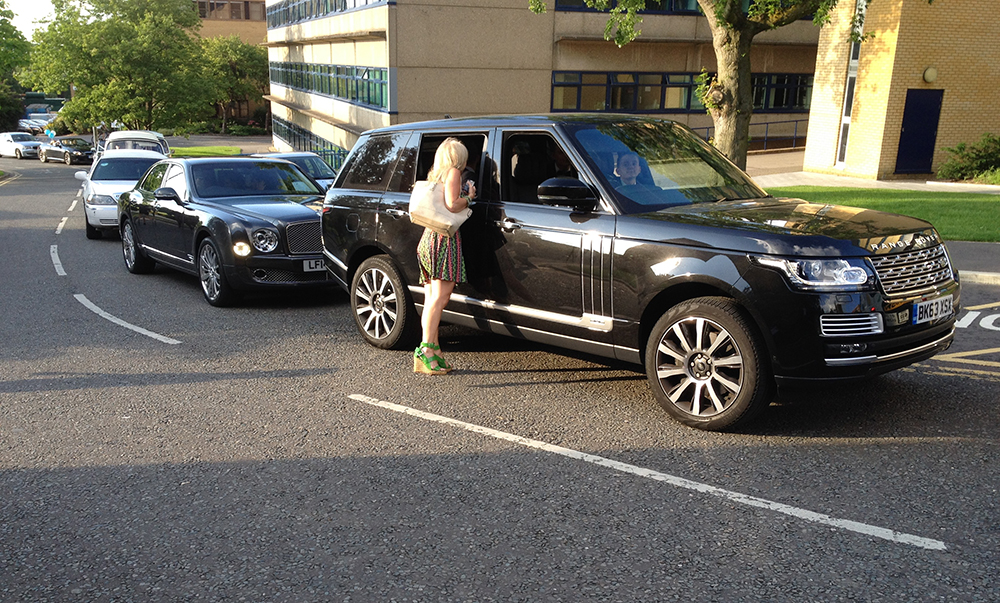 In no time we were at the university and in a queue of cars that included four Bentleys, a Rolls-Royce Phantom, two stretched Lincoln Town Cars, a McLaren 12C and, just as impressive for being so cute, a Fiat 500C which was in danger of drifting away thanks to the helium balloons tied to it.

Olly appeared from nowhere and was hauled into the back of the Range Rover, where he sat on the forward edge of Ronan’s seat. Everyone felt we’d at least drawn level with the Bentleys and the Rolls-Royce (maybe even trumped them thanks to the Range Rover LWB’s rarity) until we clocked the castle.

Some enterprising dad had eschewed the stretched Hummers in favour of building a mock castle and mounting it on the bed of a small truck. He’d painted the nose of the vehicle to resemble a closed drawbridge. We watched open mouthed as the mobile fort trundled along the road leading to the drop-off area. 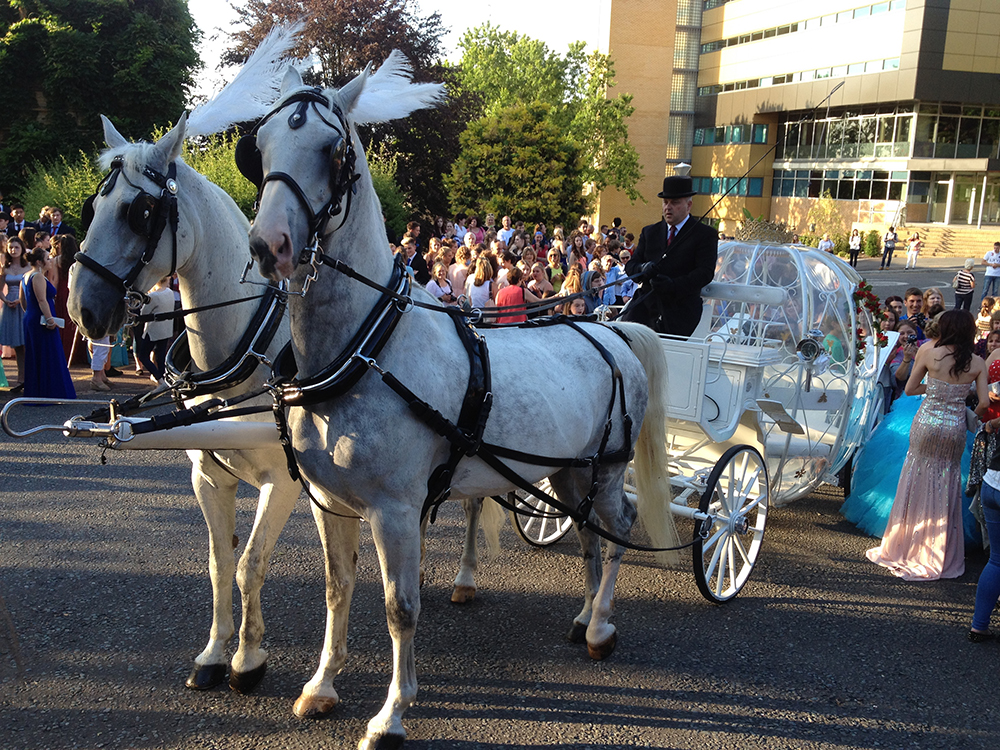 And they hit the floor when we saw another girl in ball gown trot by on a chestnut stallion. 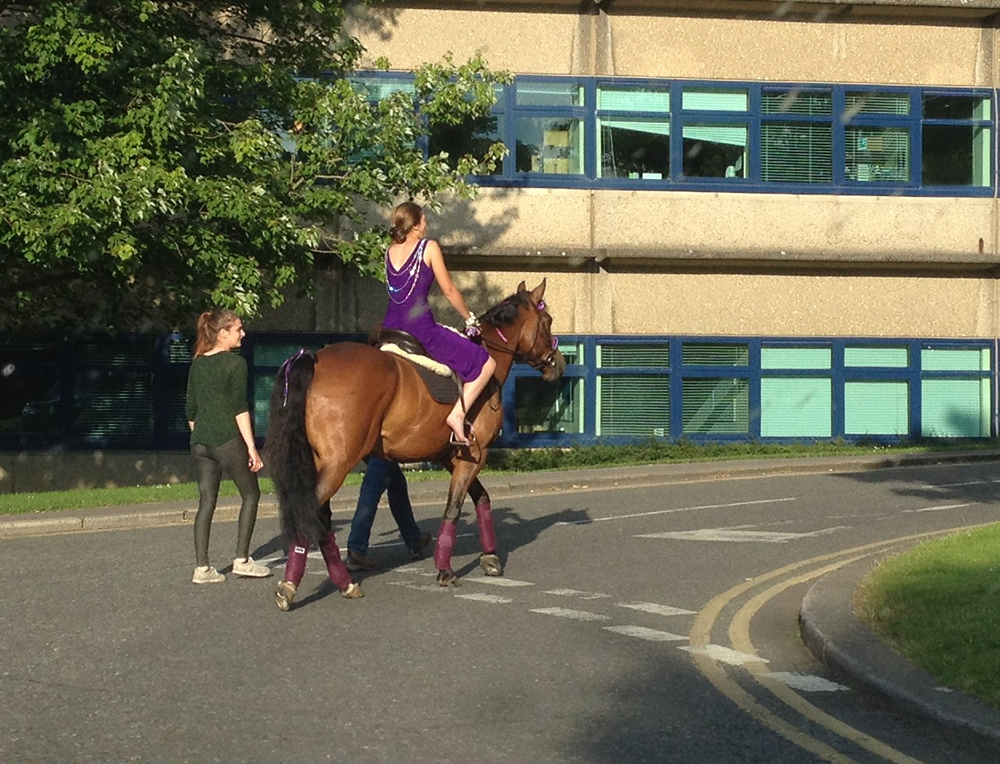 The Range Rover, the Bentleys and the Rollers were beginning to feel a little tame and sure enough it wasn’t us or them that received the loudest whoops at the drop-off point thronged with spectators and marshalled by police, but the girls in the glass coach and especially the lad in the castle who sprang up from one of the four turrets to announce his arrival. 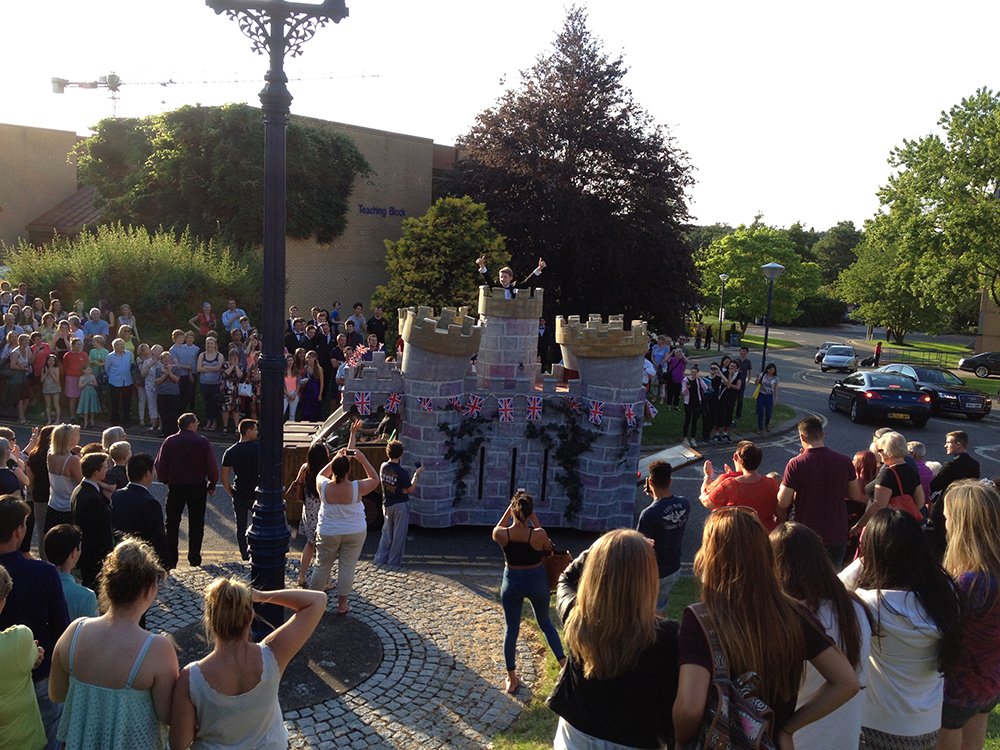 Still, when it was my turn to deposit the lads at the drop-off and I got out to watch, our Range Rover LWB looked damned good. People rushed forward to convey the grinning boys to the disco, the bright colours of the girls’ dresses contrasting with the car’s expensive black finish, the flashbulbs of the cameras making it sparkle. 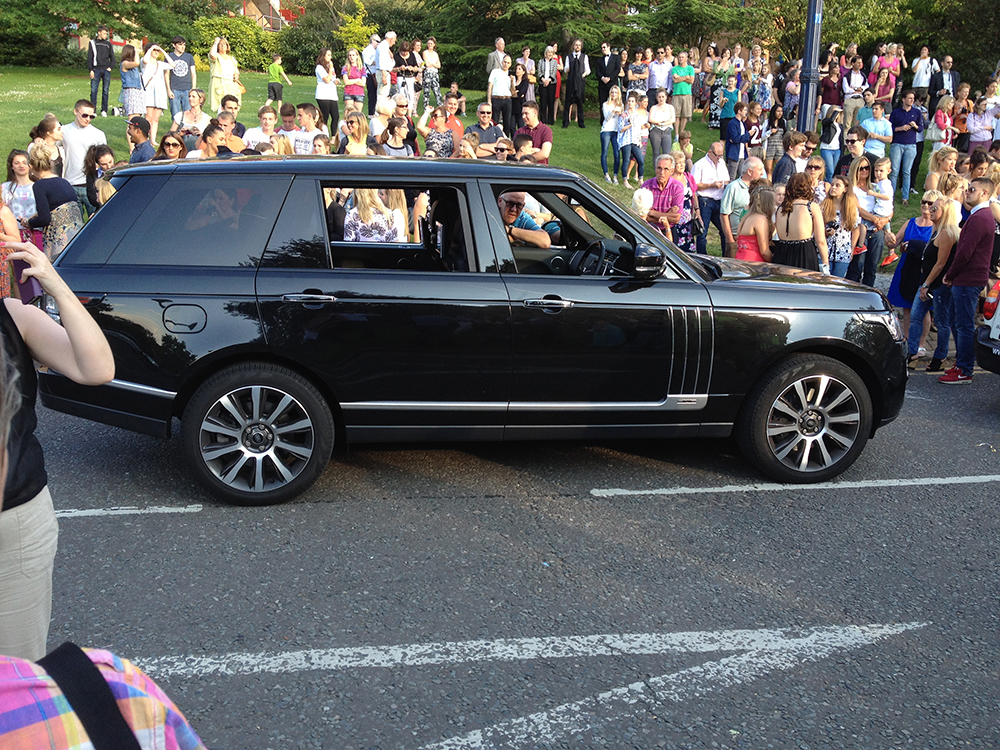