SIR STIRLING Moss, often described as the greatest F1 driver never to win the World Championship, has passed away after a long illness, his family confirmed this morning.

Moss was a true great of motor sport, respected not only as a tremendously fast driver but also one with great mechanical sympathy and sportsmanship. He won 16 Formula One races, including the British Grand Prix (twice) and the Monaco Grand Prix (three times), and stood on the F1 podium 24 times, finishing runner-up in the series four times and third three times.

Moss famously lost out on the F1 title in 1958 to rival Mike Hawthorn, though would have won had it not been for an act of astonishing sportsmanship at the Portuguese GP, the ninth round of 11. Hawthorn had finished second behind Moss but was initially disqualified; after having to stop on track he was spotted bump-starting his car downhill while rejoining the race, travelling a short distance in the wrong direction. Moss’s appeal led to the Ferrari driver being reinstated and his seven points re-awarded, and Hawthorn later won the championship by a single point.

While Moss’s prowess in F1 was well-known, he took part in many disciplines of motor sport and proved himself a winner in many different cars and competitions, on road and track. Arguably his most famous win was the 1955 Mile Miglia; a 1,000-mile race through Italy held entirely on pubic roads. Moss drove a Mercedes-Benz 300 SLR, which was based on the Mercedes team’s Formula One car, with co-driver Denis Jenkinson to victory in 10 hours, 7 minutes and 48 seconds at an average speed of 99mph. The two Englishmen finished 32 minutes ahead of Juan-Manuel Fangio, their Mercedes teammate. 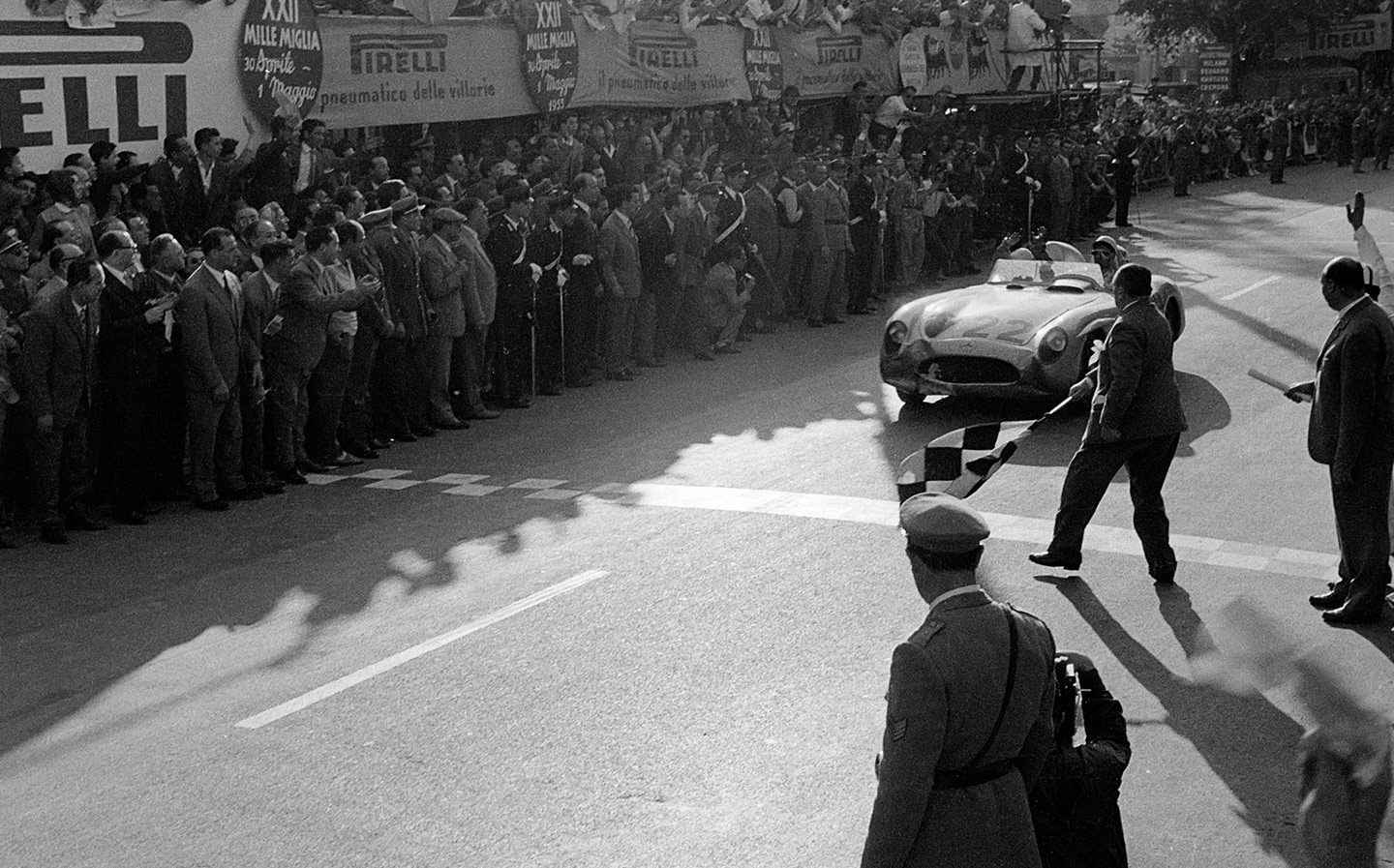 In a period interview contained within a new Netflix documentary, Fangio, often thought of as the greatest racing driver of all time, said: “When I first saw Stirling Moss racing I felt great admiration for the guy. He was fighting with the best, and over the races we became friends. I consider him one of my best friends.”

Moss retired from full-time racing officially in 1963 after a crash at Goodwood left him in a coma for a month and partially paralysed for six months, though he later returned to one-off events before joining the British Saloon Car Championship in 1980, in which he competed for two seasons. He subsequently drove at various historic meetings, such as the Goodwood Festival of Speed and Goodwood Revival until the age of 81, before retiring from public life in January 2018.

The British Racing Drivers’ Club (BRDC) said “no-one could have been prouder” to be part of the organisation than Moss, who was its longest-serving member.

Its statement said: “In the history of motor racing, not just in his home country but also wherever he raced around the world, Sir Stirling held a unique status, which continued throughout his life, long after he retired from his front line racing career.

“He was universally recognised, following the retirement of the great Juan Manuel Fangio in 1958, as the racing driver who set the standards by which all other drivers were judged, whether in Formula 1 or international sports car racing.

“His versatility and competitive instincts made him a formidable competitor in any race.”

Moss was known to have ongoing health problems and had spent 134 days in hospital after suffering a chest infection while on holiday in Singapore in December 2016. His wife Lady Moss, who had been nursing him since, was at his bedside when he died at his Mayfair home, according to the Daily Mail.

“He died as he lived, looking wonderful,” she told the newspaper. “He simply tired in the end and he just closed his beautiful eyes and that was that.”

“It was one lap too many, he just closed his eyes,” Lady Moss told the BBC.

The racing world has been paying tributes to Moss on social media. “Today we say goodbye to Sir Stirling Moss, the racing legend,” Lewis Hamilton tweeted. “I certainly will miss our conversations. I am truly grateful to have had these special moments with him. Sending my prayers and thoughts to his family. May he rest in peace.”

The former Formula One driver Martin Brundle, now a television commentator, tweeted: “RIP Sir Stirling Moss. A mighty racer and gentleman . . . He had such great stories to tell, and it was a privilege to know him.”

Today we say goodbye to Sir Stirling Moss, the racing legend. I certainly will miss our conversations. I am truly grateful to have had these special moments with him. Sending my prayers and thoughts to his family. May he rest in peace?? pic.twitter.com/SDUAqxENHk

We are deeply saddened to hear about the passing of BRDC Member, motorsport legend & friend to many Sir Stirling Moss OBE. Our thoughts are with Lady Moss & their family at this difficult time. A proud BRDC Member from the day he received his badge & we will all miss him dearly. pic.twitter.com/1qca9mvuRD

A legend of racing and a true gentleman, he will be deeply missed by all.

Our thoughts go out to Lady Moss and his family. pic.twitter.com/CYNx5xbRpF

'Legend' is often over-used: in the case of Sir Stirling Moss, it hardly makes a start. Hero to many; the epitome of a brilliant driver with the purest of sporting ethics. Deepest sympathies to Lady Moss, who adored him – along with most of the nation. RIP.

RIP Sir Stirling Moss. A mighty racer and gentleman. He had a press on style on the track and in life. Remarkable man. Survived the most dangerous era of motorsport and died today aged 90. He had such great stories to tell, and it was a privilege to know him. ?

Very sad to learn of the death of Sir Stirling Moss, the archetypal dashing racing driver and first true “Pro” – had many enjoyable encounters with him and always admired his energy #Stirling #F1 pic.twitter.com/feVVXBpDvr

Heartbreaking news this morning. Sir Stirling Moss was amongst the best of the best, on and off the track and didn’t need a world championship to prove it. RIP you wonderful man and thankyou x

It’s been confirmed that very sadly Sir Stirling Moss died peacefully this morning surrounded by his family. His passing is a massive loss motor racing and to Britain. All our thoughts are with Lady Moss and Stirling’s family.

RIP Sir Stirling Moss, what a legend. Has to be one of the kindest men I have ever met. A true ambassador of our sport, I was lucky enough to be working at some great events with the man over the years. I will always be a big fan. #legend

The #Porsche #MotorsportFamily is very sad to hear of the loss of the great Sir Stirling Moss. Picture shows the british racing legend at the wheel of the 1960 #Porsche 718 #Formula2 car #RIP pic.twitter.com/XFNt8fyCfv

All at McLaren mourn the passing of a legend of our sport, Sir Stirling Moss. A prodigious competitor, supremely talented racer, and consummate gentleman, he leaves an indelible mark of greatness on the history of international motorsport. Our condolences to his family. pic.twitter.com/c3vdzTuFgN