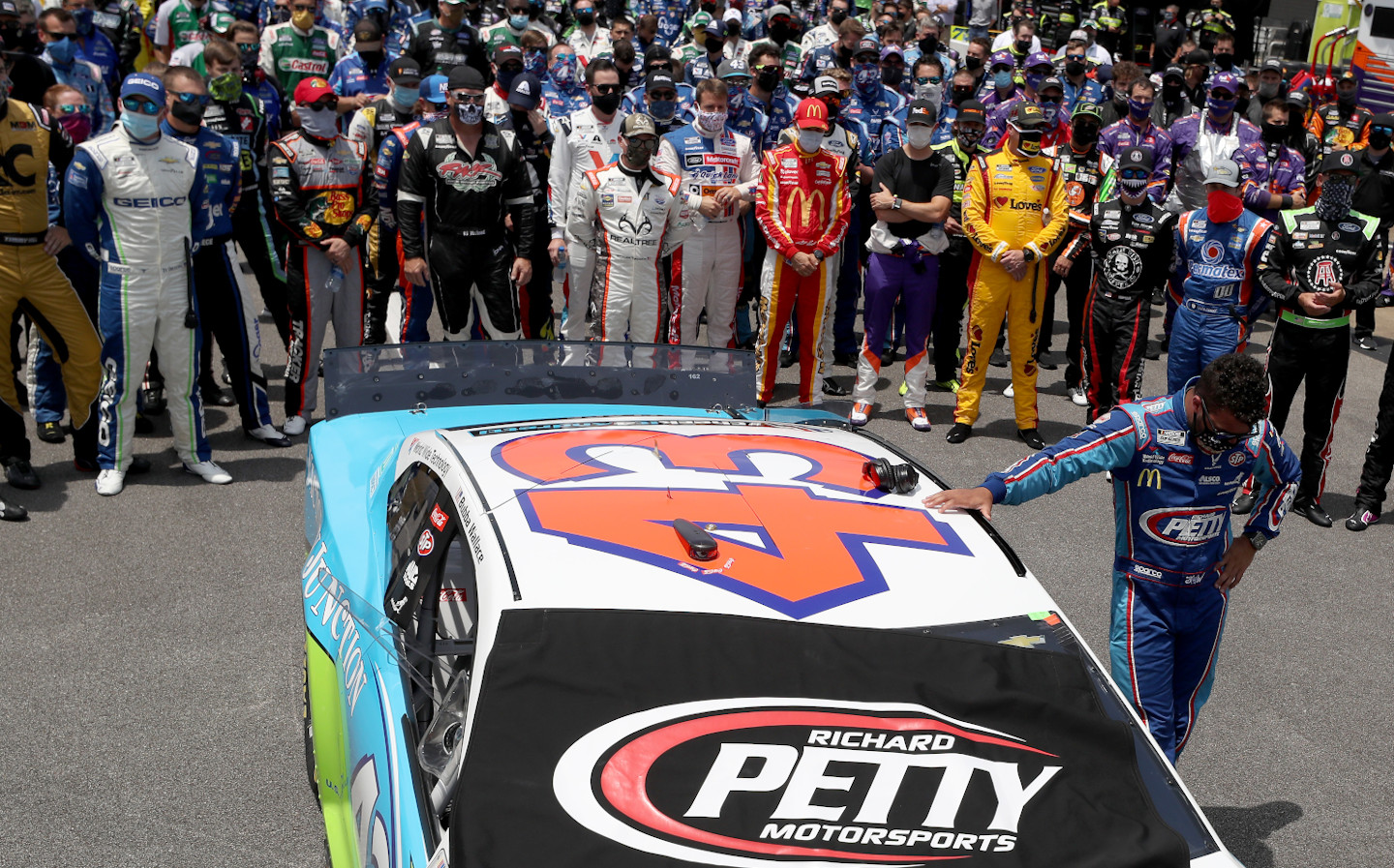 NASCAR drivers are showing solidarity with Bubba Wallace, the sport’s only black racer, after a noose was found in his garage at the Talladega Speedway, Alabama, on Sunday.

Update, June 24: An FBI investigation has determined that Bubba Wallace was not the victim of a hate crime. Photographic evidence shows that a garage door pull rope, fashioned like a noose, had been in there since last autumn, before the garage was assigned to Wallace or his team. Nascar said: “We appreciate the FBI’s quick and thorough investigation and are thankful to learn that this was not an intentional, racist act against Bubba. We remain steadfast in our commitment to providing a welcoming and inclusive environment for all who love racing.”

Before the race yesterday, Wallace was joined by all 39 other Nascar drivers, as well as crew members, who pushed his number 43 car down the pitlane towards the starting line.

Nascar issued a statement on Sunday night: “Late this afternoon, Nascar was made aware that a noose was found in the garage stall of the 43 team. We are angry and outraged, and cannot state strongly enough how seriously we take this heinous act. We have launched an immediate investigation, and will do everything we can to identify the person(s) responsible and eliminate them from the sport.

“As we have stated unequivocally, there is no place for racism in Nascar, and this act only strengthens our resolve to make the sport open and welcoming to all.”

According to the New York Times, the Justice Department and the FBI are also reviewing the incident.

In a statement posted to his twitter account, Wallace said: “Today’s despicable act of racism and hatred leaves me incredibly saddened and serves as a painful reminder of how much further we have to go as a society and how persistent we must be in the fight against racism.

“Over the last several weeks I have been overwhelmed by the support from people across the Nascar industry including other drivers and team members in the garage.

“As my mother told me today, ‘They are just trying to scare you.’ This will not break me, I will not give in nor will I back down. I will continue to proudly stand for what I believe in. A video posted to Nascar’s official twitter account showed Wallace looking emotional as he climbed out of his car.

It's moments like this that make us proud to have @BubbaWallace in the garage every weekend. pic.twitter.com/pJKQievxjP

The act comes less than two weeks after Wallace made a stand regarding the prominence of the Confederate flag at Nascar events. At a race in Virginia on June 10, he called Nascar’s ban of the flag (which is regarded as a hate symbol among many due to its ties to slavery and white supremacy) “a pivotal moment for the sport.”

At the same race, he clad his car in Black Lives Matter livery and wore a t-shirt printed with the phrase “I can’t breathe”, the last words of George Floyd, a black man murdered by a white police officer in Minneapolis at the end of May.

The implication of the noose left in Wallace’s garage was clear in an American state where more than 300 African-American men were lynched between 1877 and 1943. One of the last reported lynchings in America happened in Alabama in 1981.

Richard Petty, a Nascar legend and the owner of Richard Petty Motorsports, the team for which Bubba Wallace races, comforted the driver as he wept after the pitlane show of solidarity.

He also posted a scathing message to Twitter: “This filthy act serves as a reminder of how far we still have to go to eradicate racial prejudice and it galvanises my resolve to use the resources of Richard Petty Motorsports to create change.

“The sick person who perpetrated this act must be found, exposed, and swiftly and immediately expelled from Nascar. I believe in my heart this despicable act is not representative of the competitors I see every day in the Nascar garage area. I stand shoulder to shoulder with Bubba, yesterday, today, tomorrow and every day forward.”

After a noose was found in his garage stall last night, @NASCAR drivers show their support for @BubbaWallace at Talladega. #IStandWIthBubba pic.twitter.com/uFlxmP27qa

The show of solidarity comes the day after it was announced on this side of the Atlantic that F1 driver Lewis Hamilton (also the only black driver in his sport) would set up a commission striving to encourage more diversity in motor sport. In the weekend’s The Sunday Times, the six-time world champion wrote of the “proud and lonely walk” of being black in a white-dominated sport.

Formula One announced yesterday that it would set up a task force that “will listen to people from across the paddock, including the drivers, as well as externals and make conclusions on the actions required to improve the diversity and opportunity in Formula 1 at all levels”. More details of the task force are expected to be released later this week.