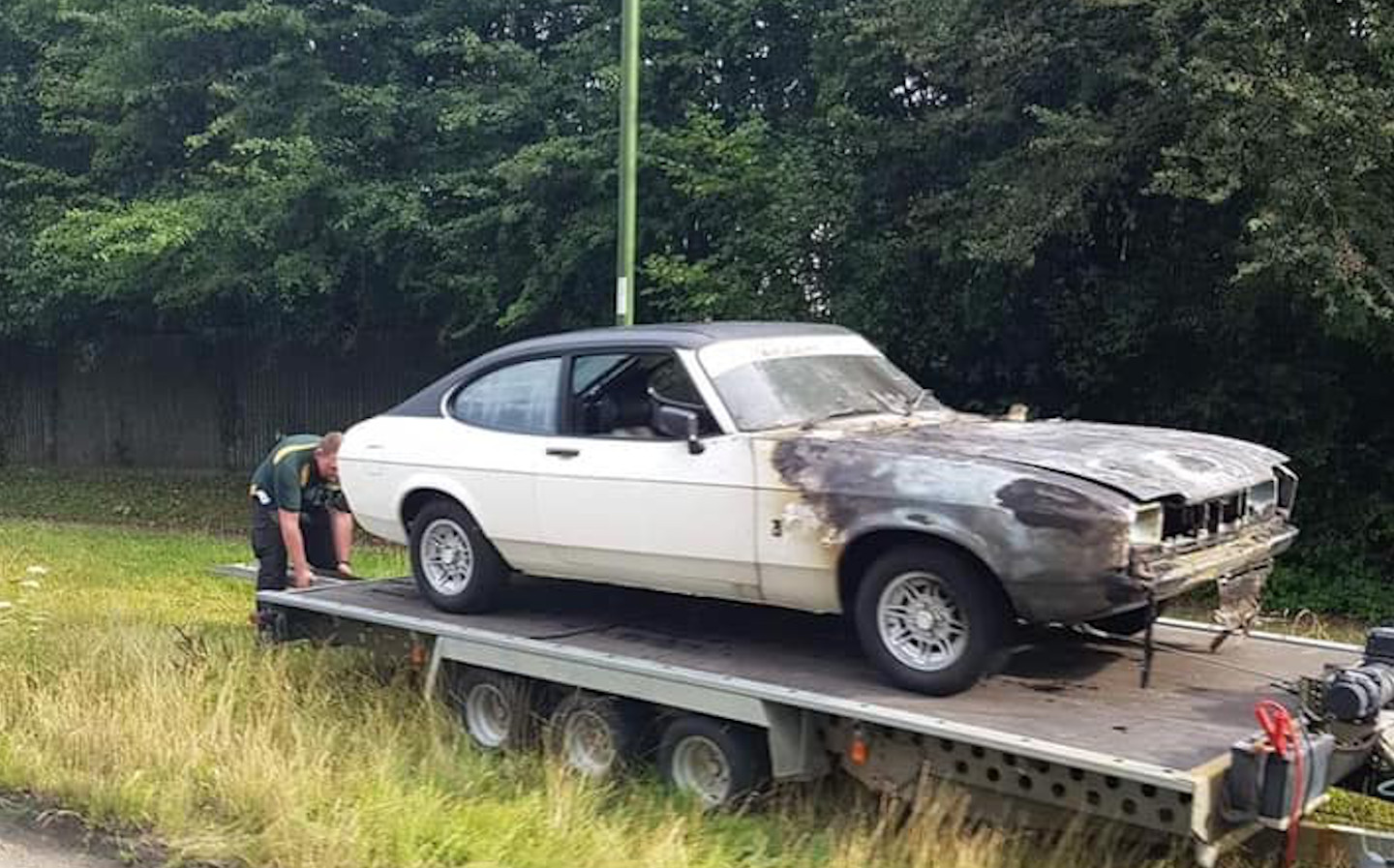 LAST WEEK some distressing photos surfaced on social media: the famous Ford Capri from the long-running TV series Minder had caught fire. Photos posted to a Facebook group showed firefighters going at the front of the car, the area that had caught fire, while another showed it being loaded onto a truck.

The vehicle gained notoriety in the 1980s during the airing of Minder. In the show it belonged to Terry McCann, played by Dennis Waterman, the eponymous “minder” (slang for bodyguard) of the show. Set in London, the programme followed the exploits of McCann and Arthur Daley (played by George Cole) a shady used-car salesman and general wheeler-dealer. At its peak, it was one of the most popular programmes aired on ITV.

Minder and Ford Capri fans worried that the fire would render the car unsalvageable, but it has now been confirmed that the vehicle is in the safe hands of a classic car company and on its way back to full health.

According to a video by Furious Driving, aka Sunday Times Driving alum Matt Richardson, the Capri is now at Classic Car Restorations in Canterbury, Kent, a place that classes itself as something of a Ford specialist (although it is more adept at repairing Mk.1 Escort Mexicos, according to its website). “Putting it back together is not going to be a problem,” says Matt in the video.

He notes that some people online had diagnosed the fire as a result of ethanol eating the petrol lines (classic cars do NOT like ethanol), which is a fairly safe bet, but the incident actually occurred due to an electrical short, which is partially evident by the fact that the loom (also known as a cable harness) has melted together.

The Capri was not actually being driven by the car’s owner at the time of the incident, but rather ironically, by a mechanic taking it to an MOT. The quick-thinking mechanic thought to lift the bonnet when the blaze started, meaning that the fire brigade didn’t have to smash up the front of the car to put it out when they arrived on the scene.

When they did arrive, which was apparently very promptly, the fire brigade were quick and decisive in extinguishing the fire. According to Matt, the fact that it was a classic Capri got the Fire Service going even faster, although you do like to think that the Fire Brigade operate at the swiftest possible speed no matter what the car is…

Regardless, the blaze was reportedly out before any very significant damage could be done to the Capri, apart from various plastic components, which no one would expect to survive a fire. However, most of the panels and even the brakes are still intact.

The restoration company is reportedly going to use the opportunity to strip down the Capri to make sure all of the car’s underpinnings are still working soundly, as well as to sandblast it to stave off any corrosion (after all, it is an old Ford). The Capri may not still be a matching-numbers model when it emerges in a few months time (although all salvageable parts will of course be saved), but it will be “back on the road, looking better than new”, says Matt.