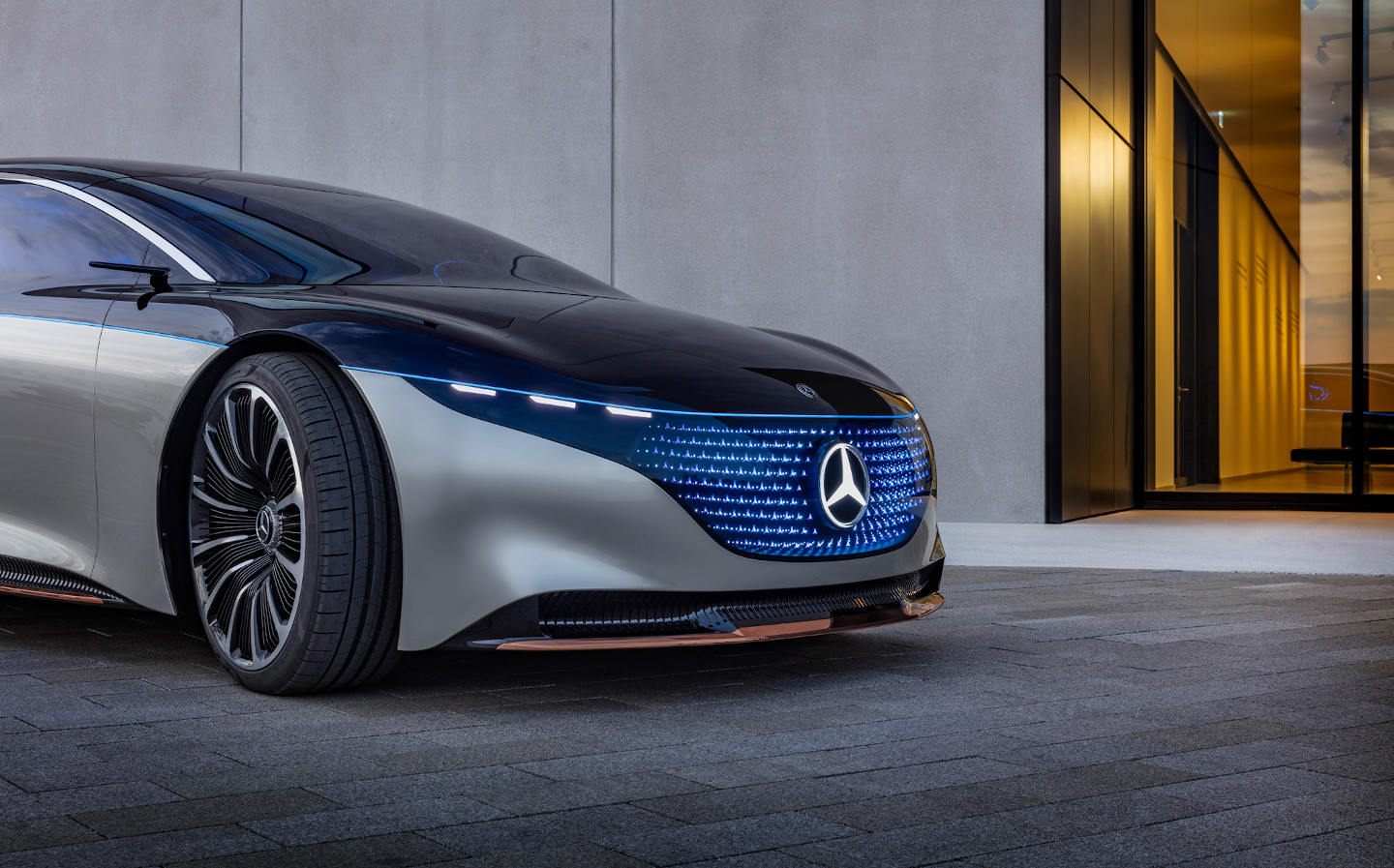 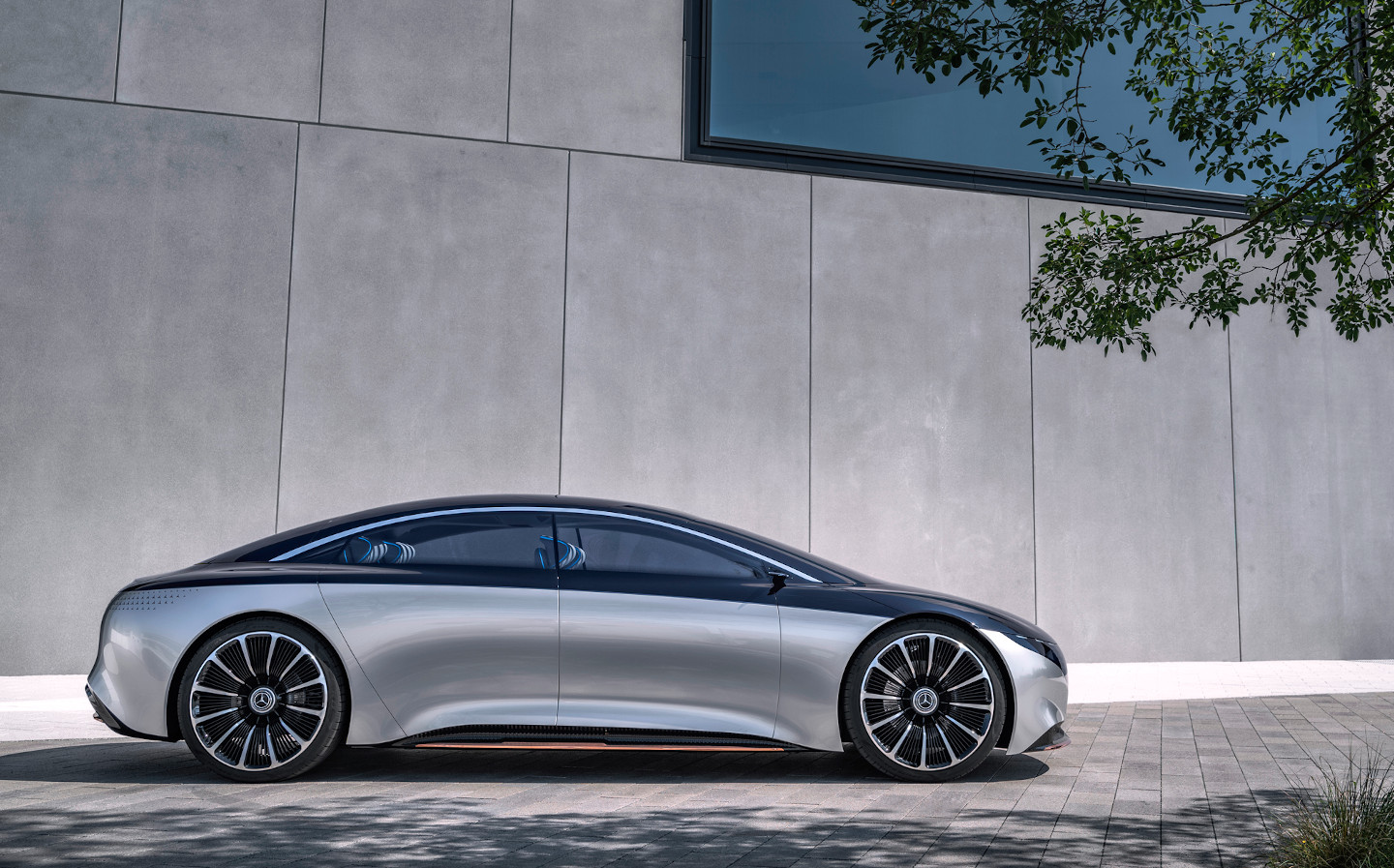 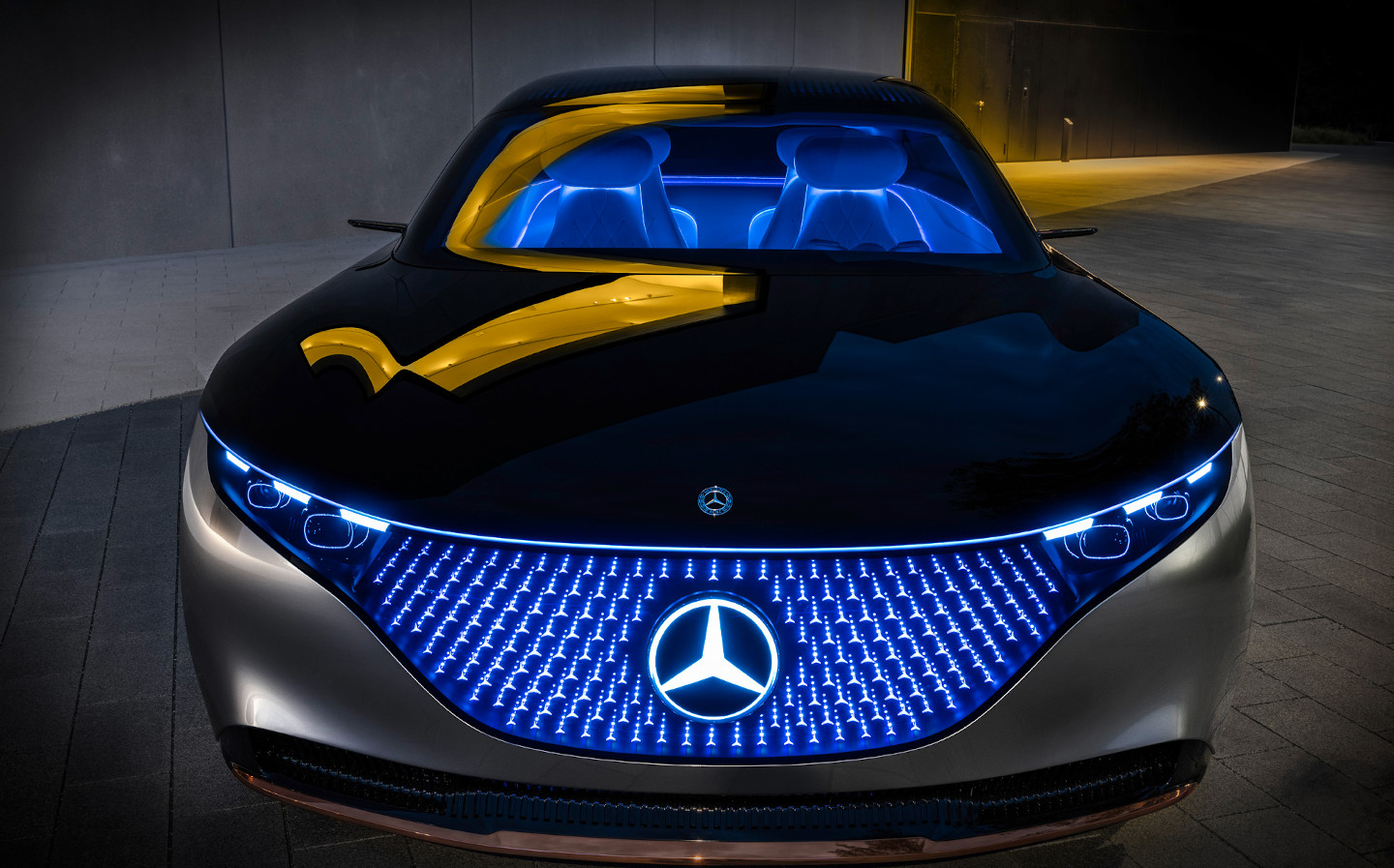 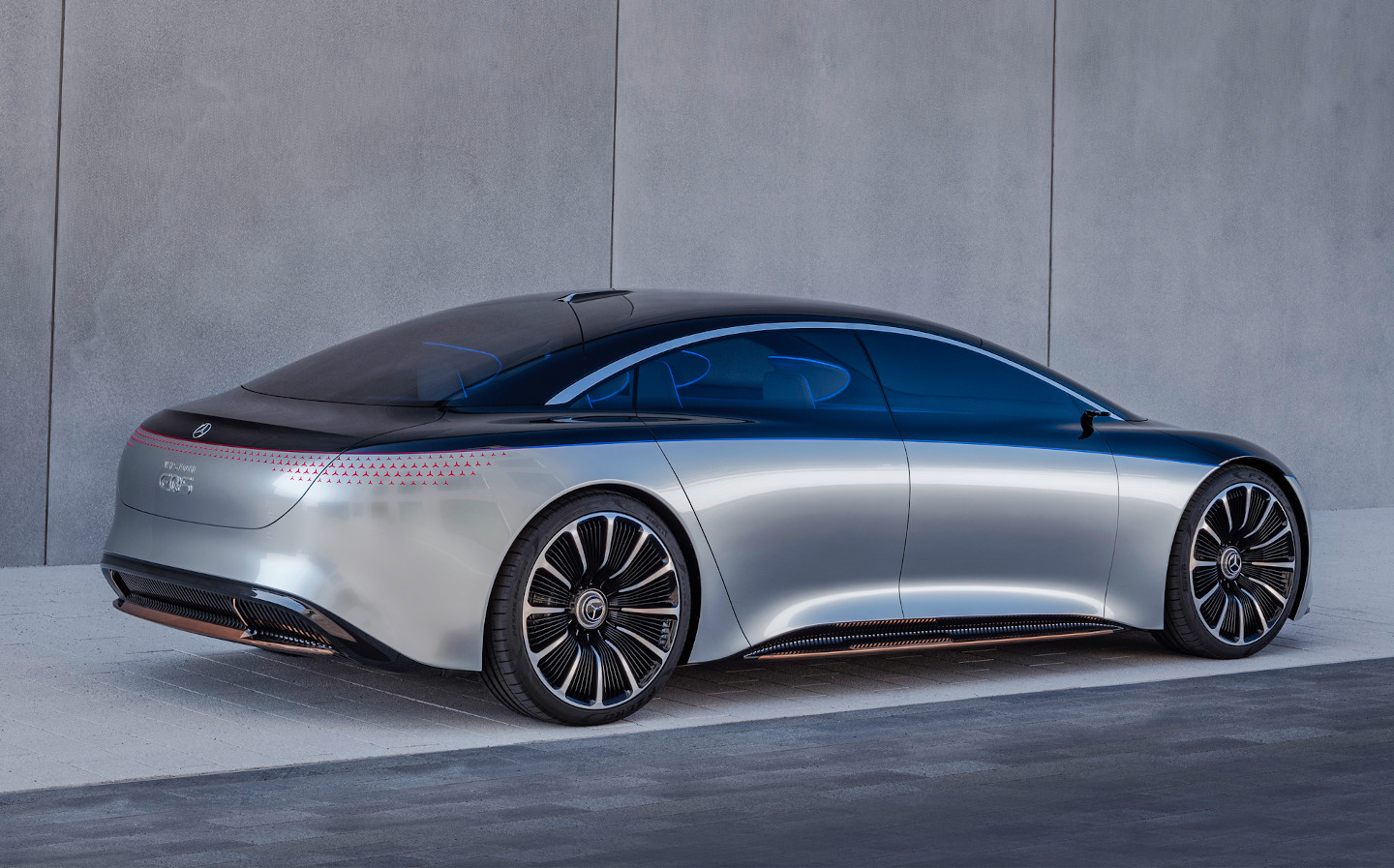 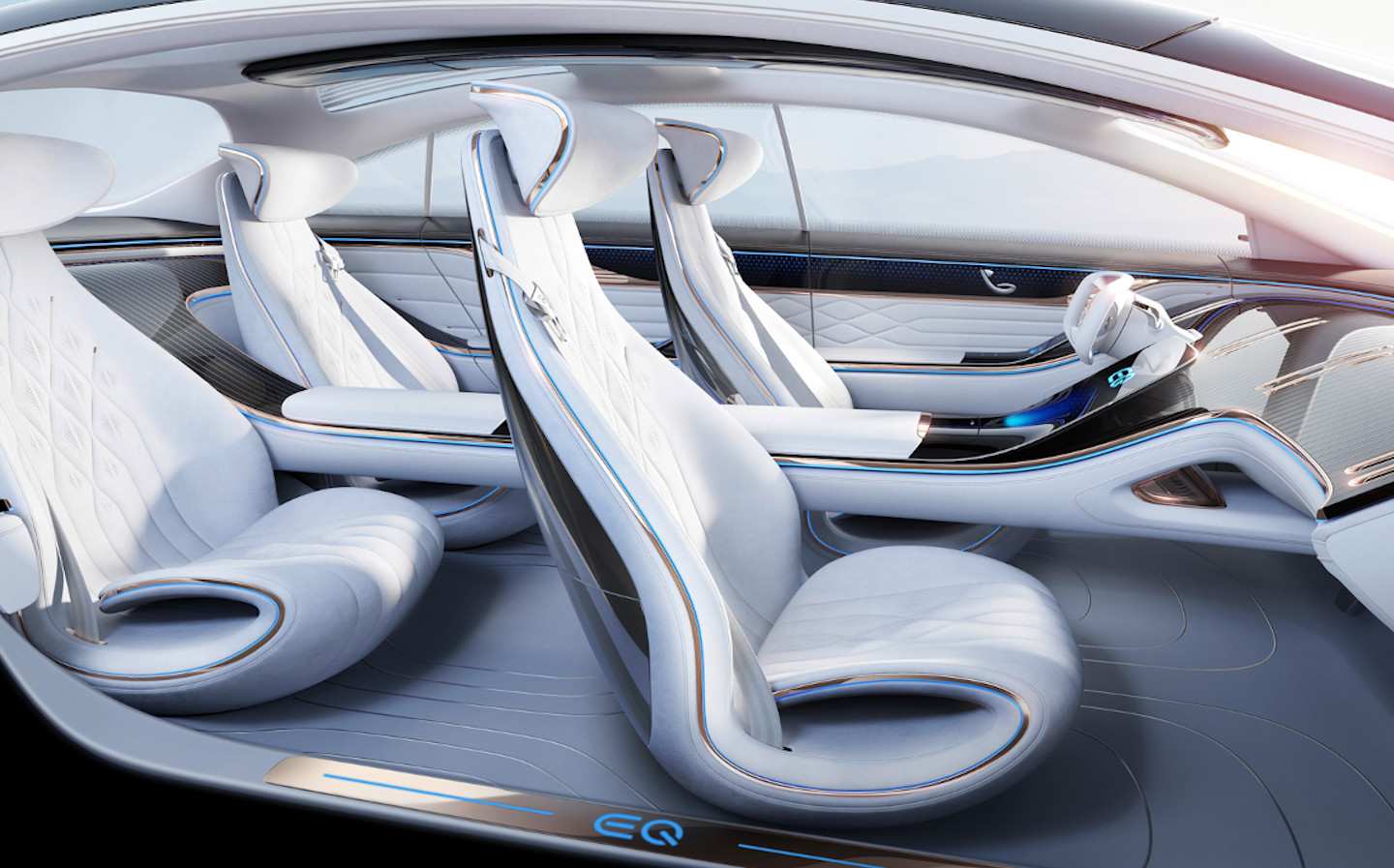 THE MERCEDES Vision EQS was unveiled at the Frankfurt Motor Show (remember motor shows?) last year, and pitched by Mercedes as the herald for a new era of Mercedes design, with its long, sleek body and futuristic interior, and as a flagship for the company’s electric sub-brand.

It’s still unclear how much the production version of the car will deviate from the concept we saw in Frankfurt, though official teaser shots show that the production version has smaller wheels and less dramatic headlights. Mercedes says the EQS still has “‘one bow’ proportion and dramatic fluidity [that] are stylistic heralds of a new generation of electric Mercedes-Benz vehicles”.

The EQS comes with some fairly impressive stats, especially when it comes to range, so electric carmakers like Tesla best keep one eye on Mercedes.

What is the EQS?

The EQS is an electric luxury car that will rival the upcoming electric Jaguar XJ and Tesla Model S. It’s essentially an electric version of the S-Class, although it will stand alone from the S-Class range as part of Mercedes’ EQ sub-brand.

It’s a sub-brand we’re gradually getting a better look at: the EQV, an electric MPV, was unveiled last year, and Jeremy Clarkson has already reviewed the EQC, an electric SUV. Two more SUVs, the EQA and EQB, are also slated to join the lineup.

What is the battery range of the EQS?

Mercedes Boss Ola Källenius has confirmed that the upcoming EQS electric saloon will have an eye-widening 435-mile WLTP range — 56 miles more than that of a long-range Tesla model S, which currently has the longest range on the market.

The EQS will also come with 350kW ultra-rapid charging, meaning the limo shouldn’t be waiting around long at charging stations — it will reportedly be able to get to 80% charge in under 20 minutes at that speed. Though 350kW public charging points are extremely rare at present — most rapid chargers go up to 50kW (DC) — faster stations will arrive in the coming years.

By way of comparison, Tesla’s Superchargers are mostly 120kW though the new “V3” units promise recharging at up to 250kW. A Model S operating at peak efficiency on a V3 Supercharger can recover up to 75 miles of charge in five minutes, at up to 1,000 miles of range per hour, the company claims.

What are the Mercedes EQS’s acceleration times and top speed?

Two electric motors, one on each axle, deliver a total of 470bhp and 560 lb ft pf torque to all four wheels, according to reports, resulting in 0-62mph in 4.5 seconds, which is rapid indeed. The top speed is expected to be limited to “around 125mph”.

When will the EQS go on sale?

The EQS is expected to go on sale next year.

A souped-up AMG version of the EQS will reportedly follow the release the standard model, with more than 600bhp at its disposal.

How much will the EQS cost?

There isn’t yet an official price tag for the EQS, although if the price of Mercedes’ previous electric offerings is anything to go by, it won’t be cheap. Jeremy Clarkson had mixed feelings about the EQC SUV in his review, but its price tag was one of the things he took most issue with. Starting at around £65,000, it cost “almost exactly twice” what he expected it to.

The internal combustion S-Class has an OTR price starting at around £76,000, and electric cars come out more expensive than their traditionally propelled counterparts, so the starting price for the EQS could be anywhere from the very high five figures to the low six figures, with a further premium for the AMG version.