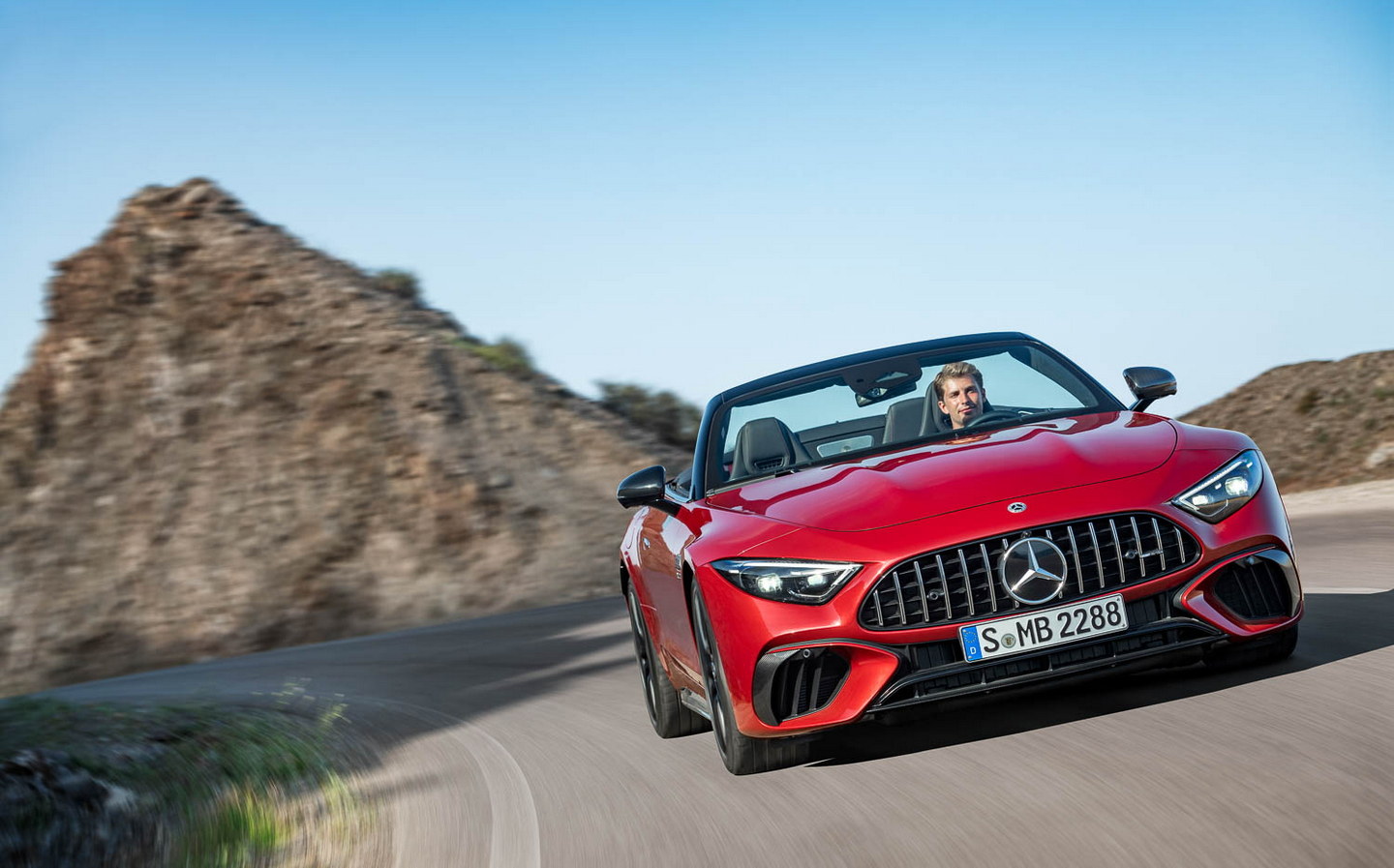 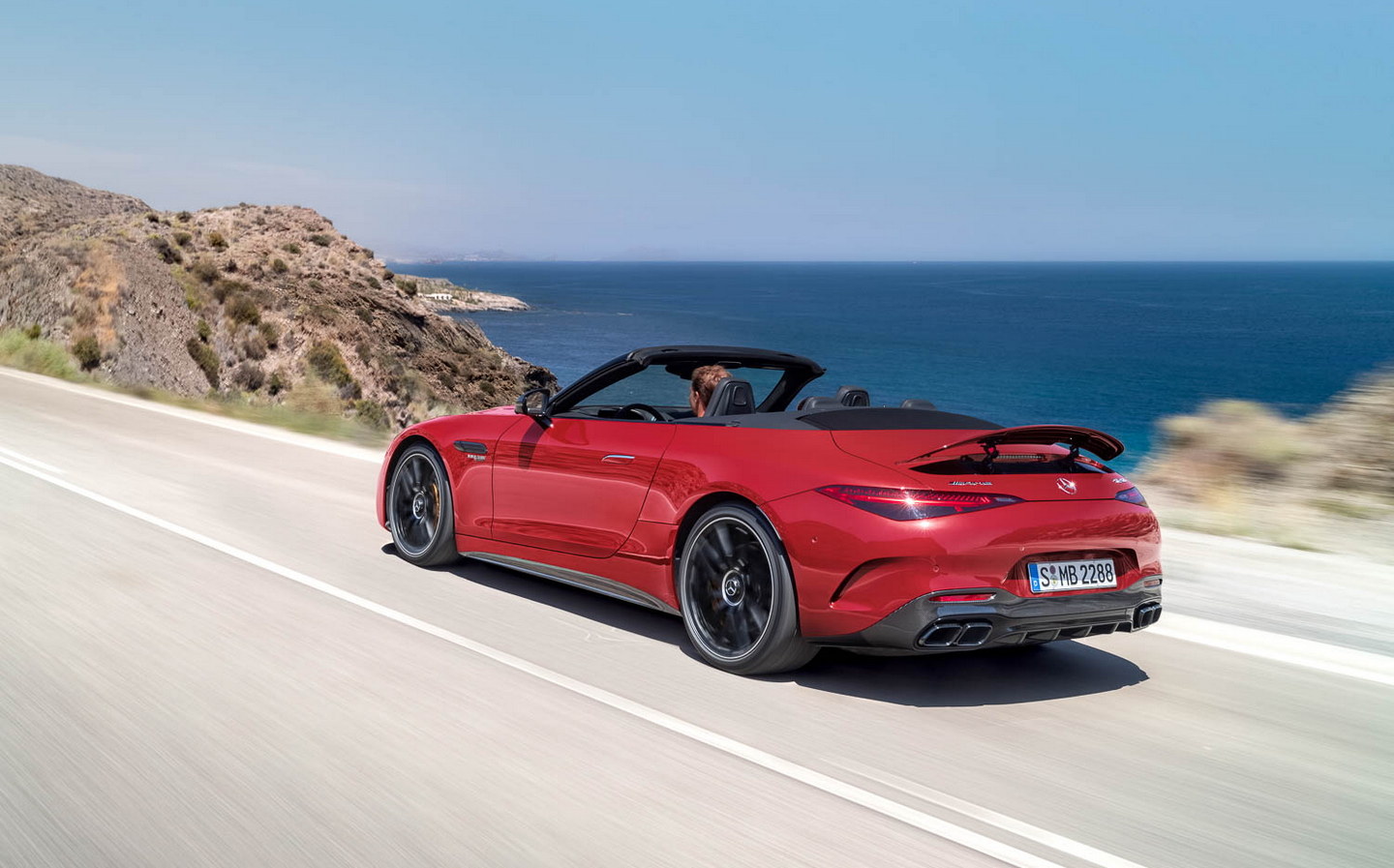 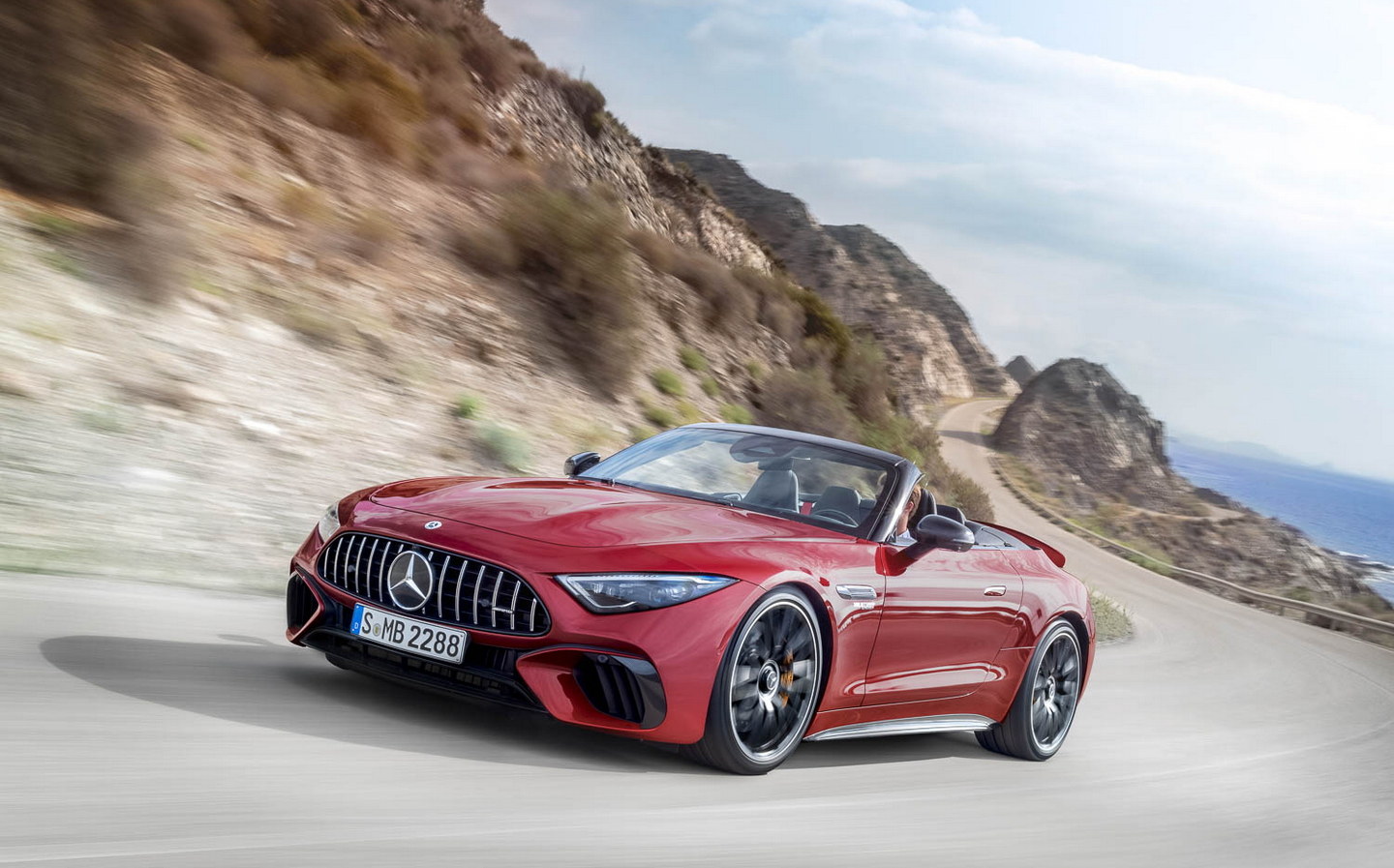 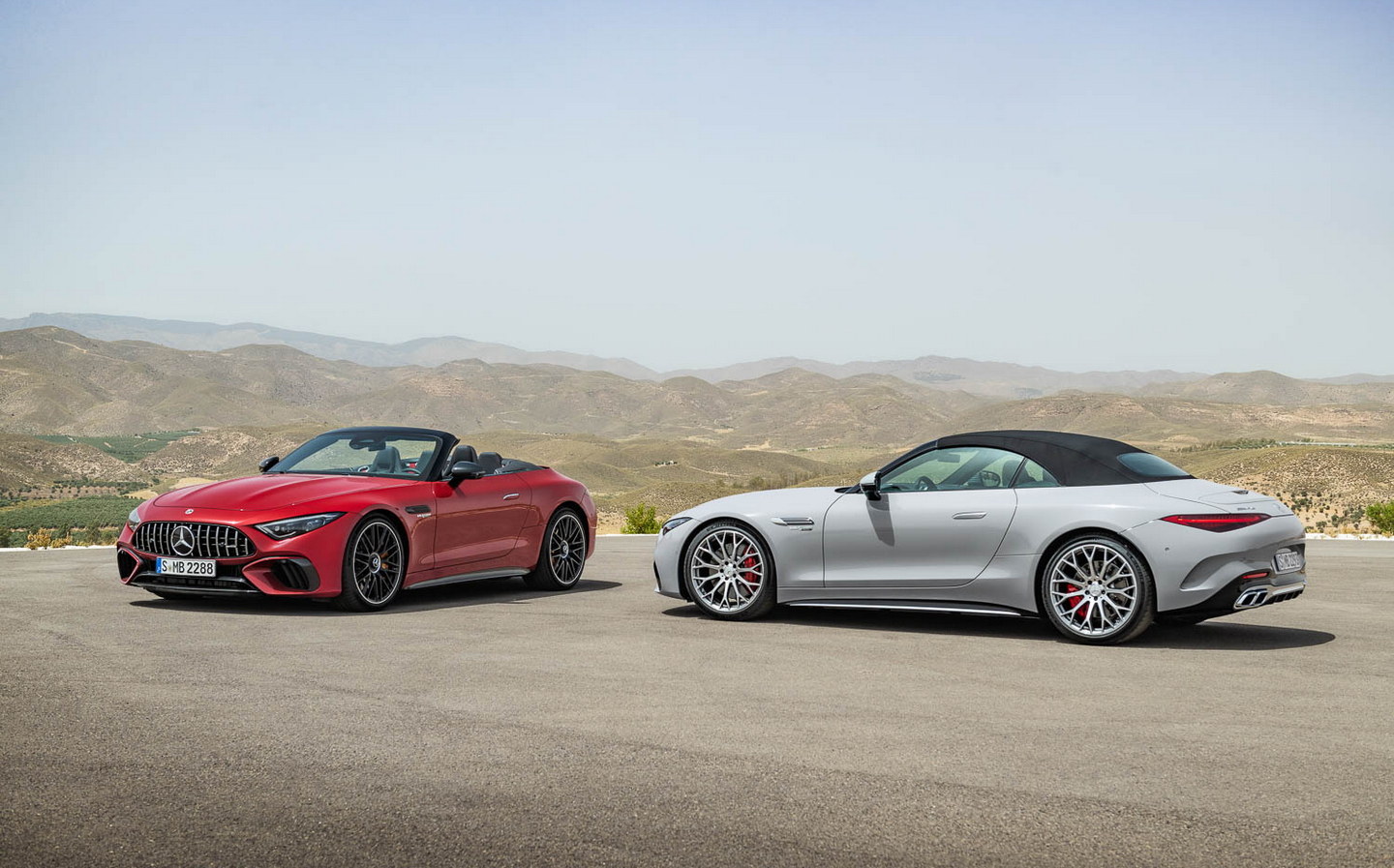 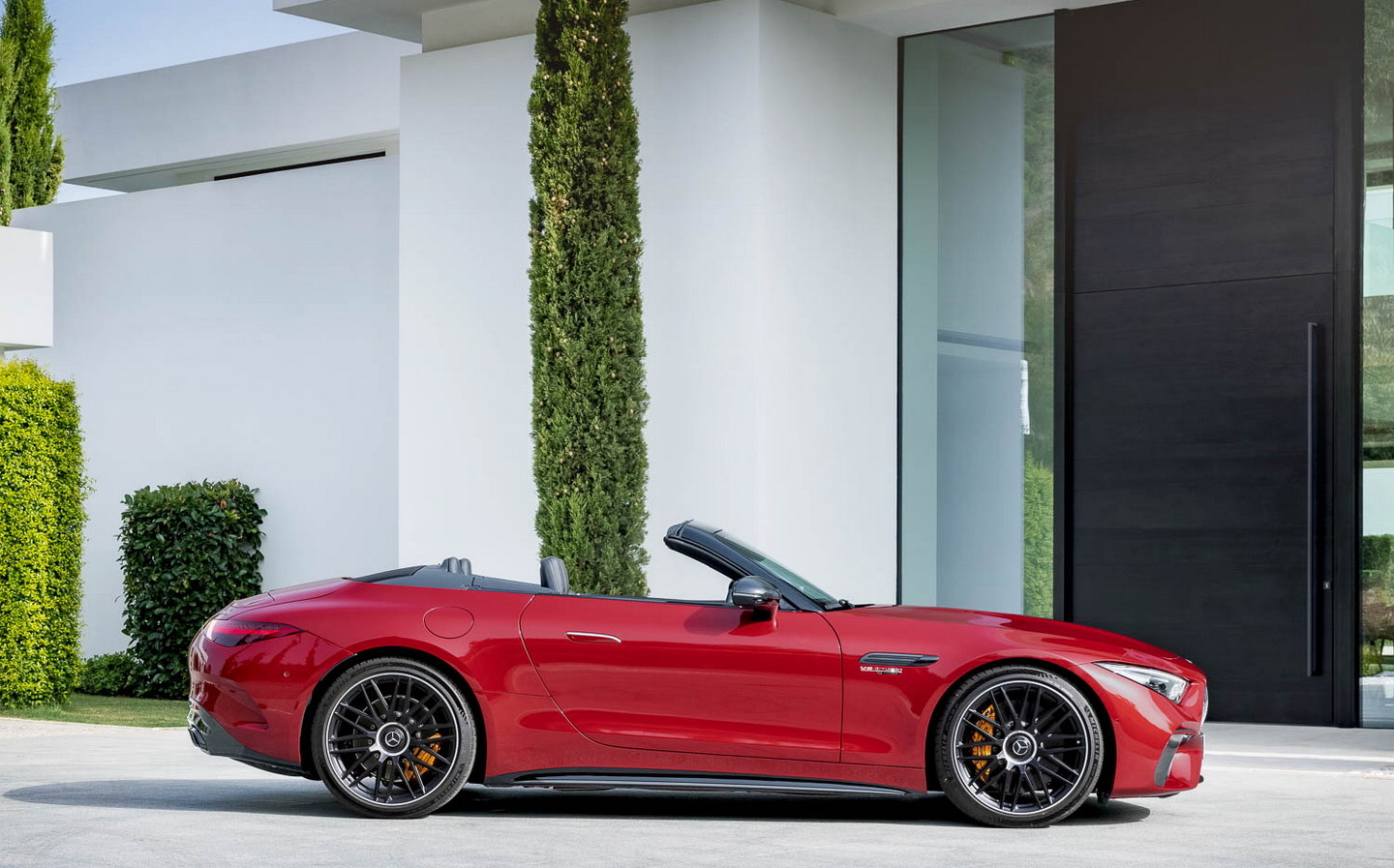 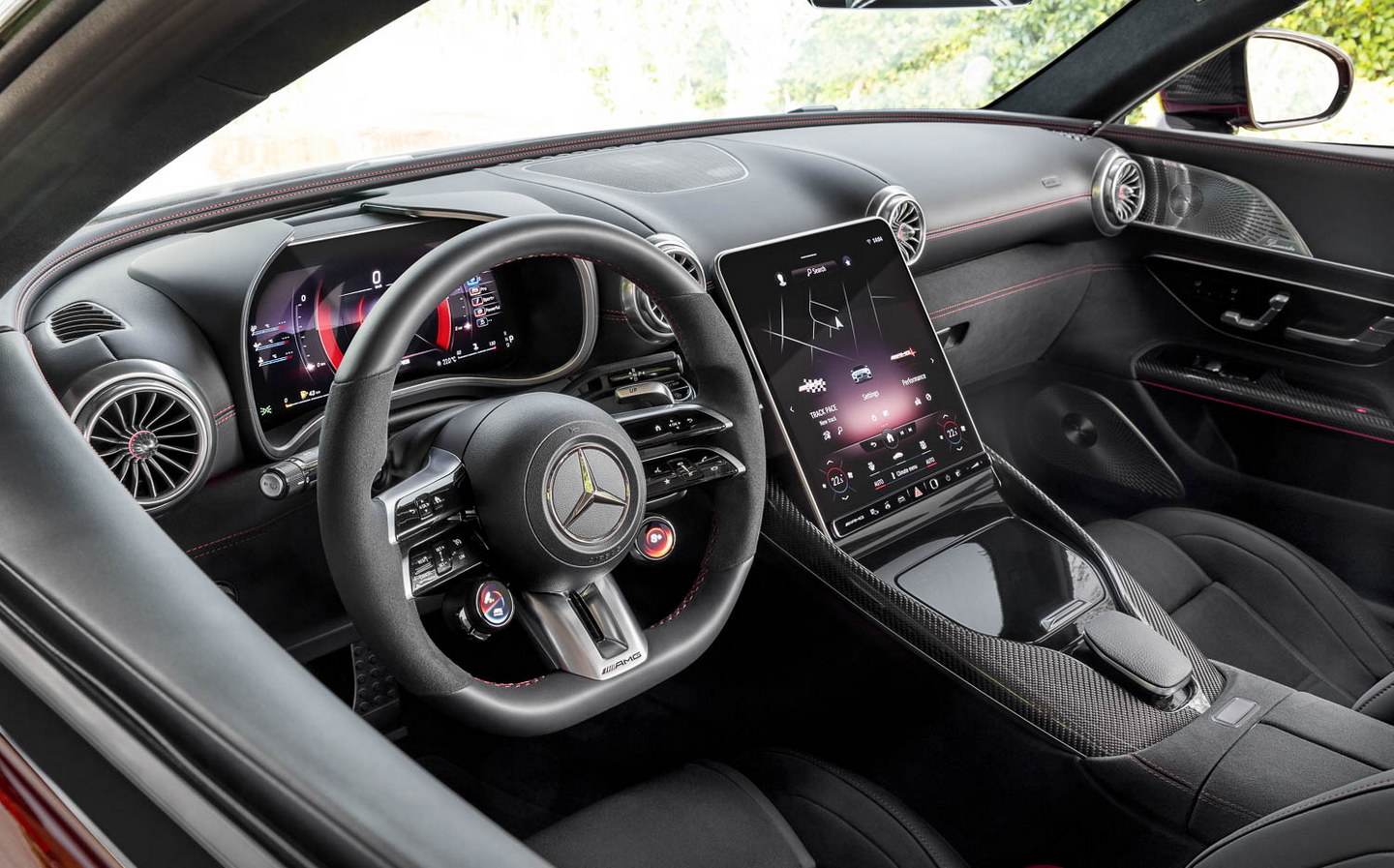 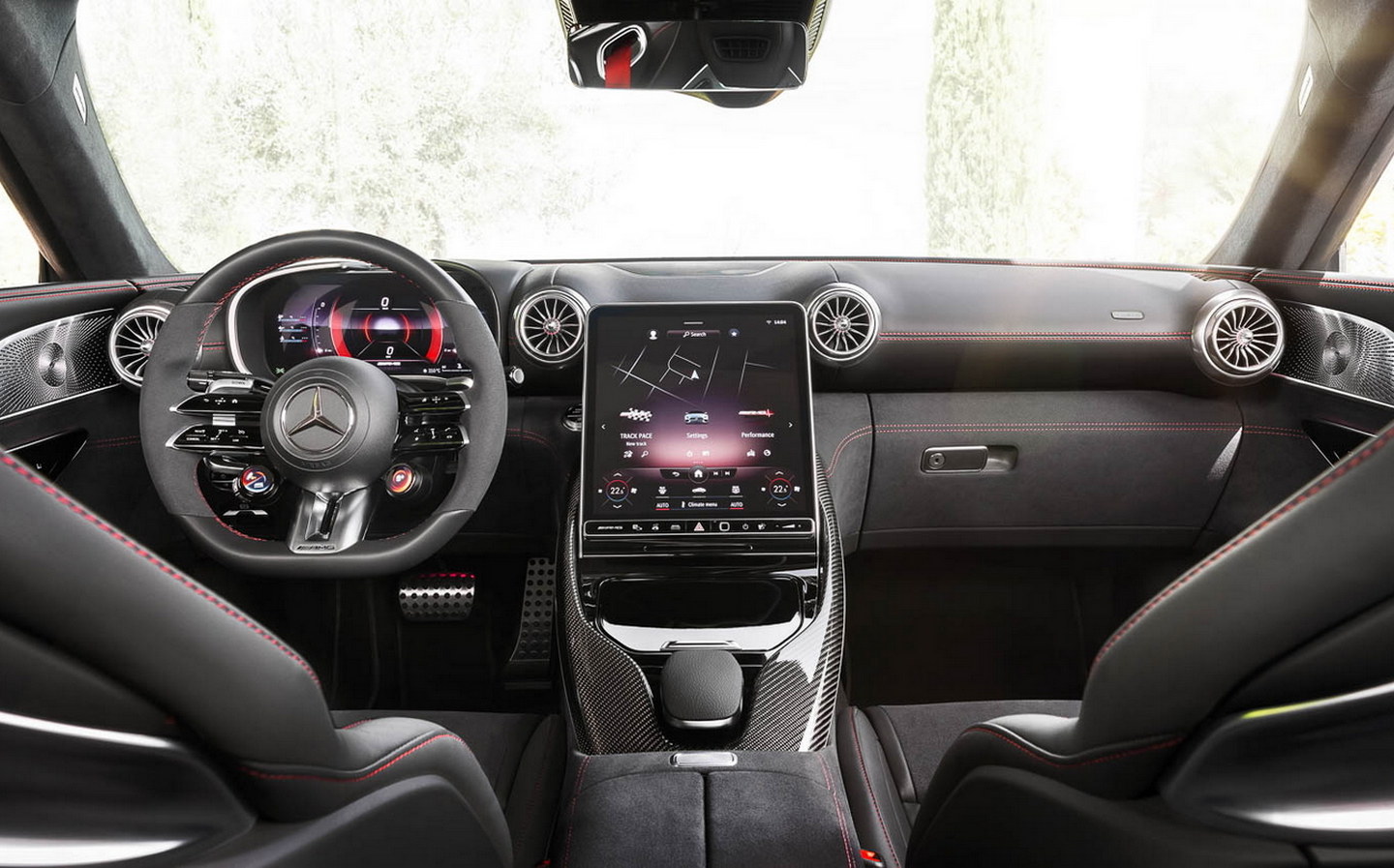 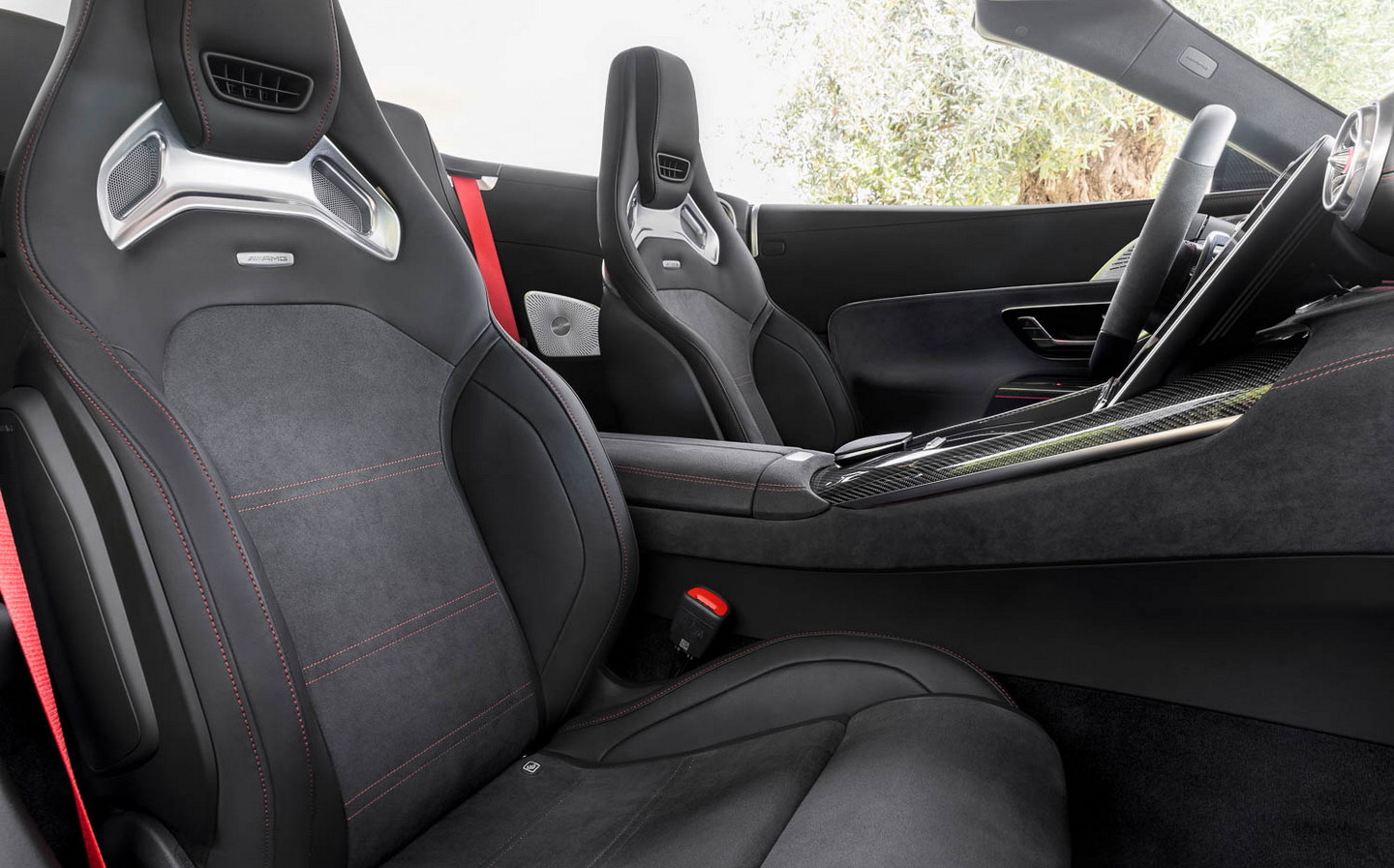 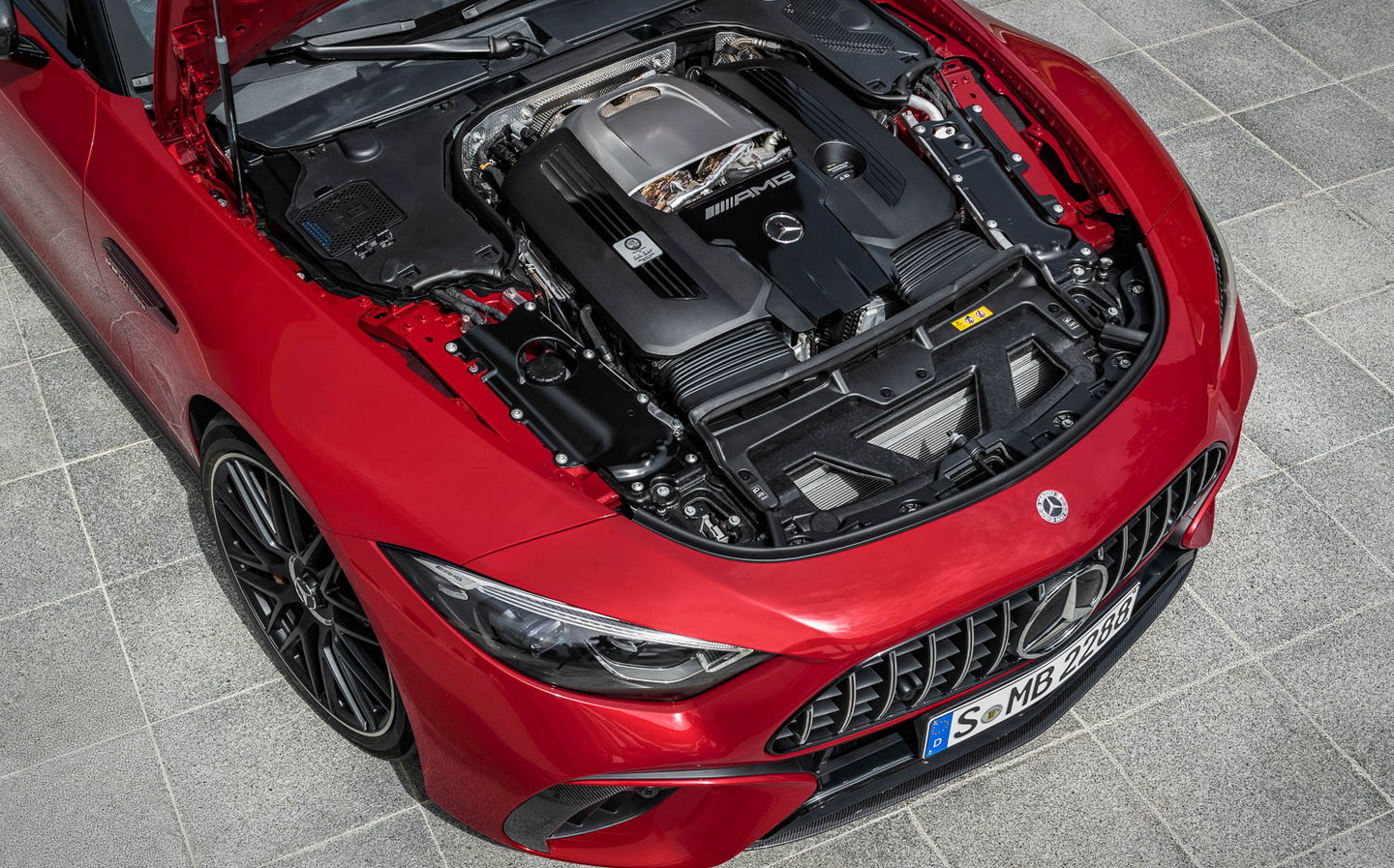 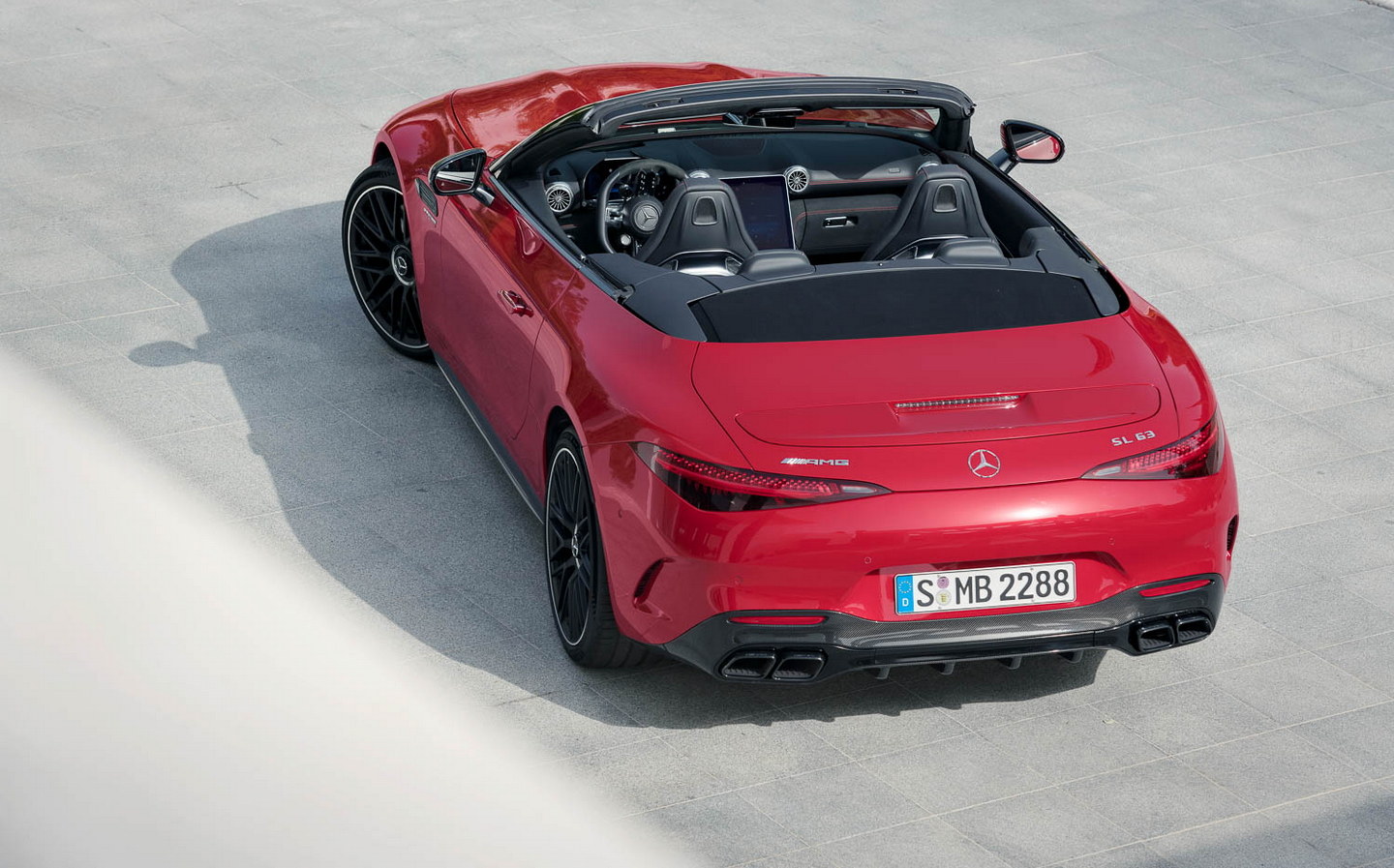 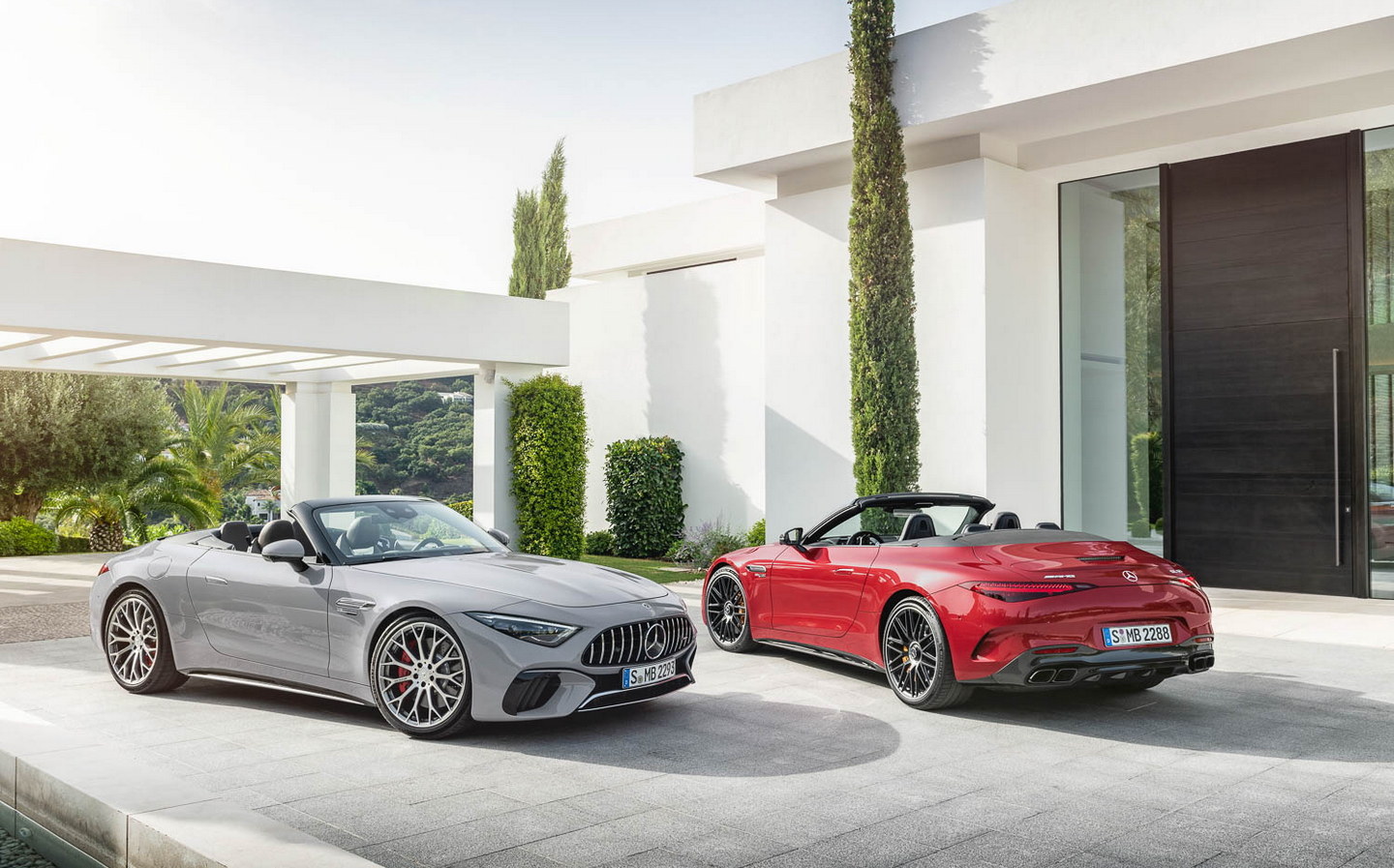 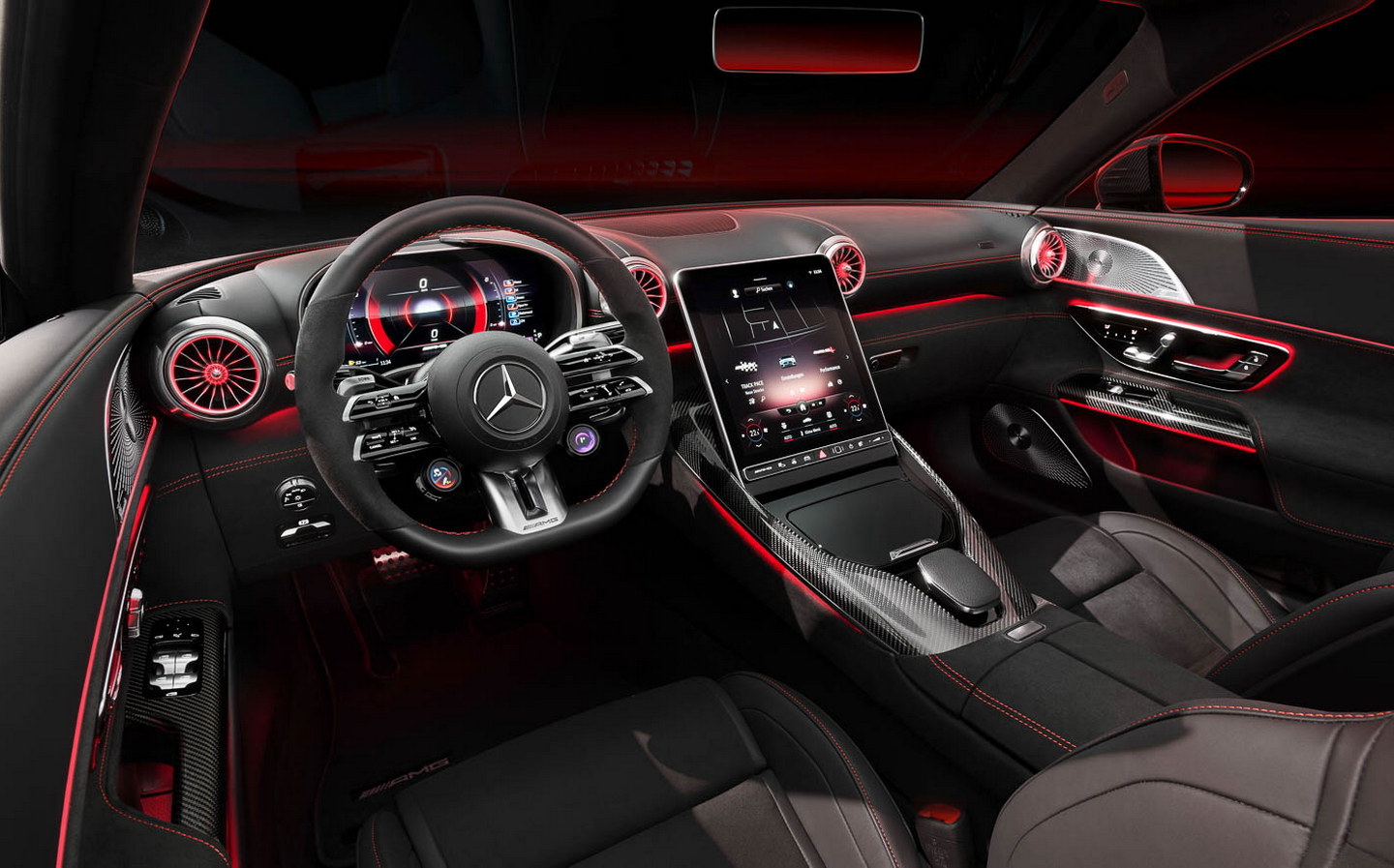 MERCEDES-AMG has unveiled the latest generation of its convertible SL grand tourer which is built on all-new architecture and sees the return of the folding soft-top to the SL range.

As well as two V8 engine options and a plug-in hybrid version coming down the line, this latest SL is the first to feature all-wheel drive.

The looks of the SL are tauter and more muscular than previous generations with a long bonnet, short overhangs and large alloy wheels filling out the arches. The 14-slat front grille is reminiscent of the 300-SL Panamericana racer of the 1950s and thin LED matrix lights adorn the front and rear.

Despite nods to SL models of old, not a single part of the new model’s body is shared with any other Mercedes, not even the AMG GT Roadster, according to the company. Beneath that classical body lurks advanced technology.

Normally the louvres in the air intakes remain closed for aerodynamic efficiency, but a series of temperature sensors can detect when certain parts need cooling and are able to open the louvres accordingly.

Other active aero includes a retractable rear spoiler that is operable from 50mph and another (optional) active element is hidden in the underbody in front of the engine which descends to create a Venturi effect, sucking the car downwards to prevent front-end lift at high speed.

The new model also marks the return of the soft-top roof to the SL range, previous models since 2001 having featured a folding metal hard-top. The switch in materials, according to Mercedes, saves 21kg.

The big news with the interior is that, for the first time since the 1990s, the SL is a 2+2, though Mercedes does admit that the rear seats are only suitable for those up to around five feet tall.

The rest of the interior is a broadly minimalist affair, eschewing buttons in favour of touchscreen-based operations. The instrument cluster is a 12.3in digital screen and the latest generation of Mercedes’s MBUX control system is accessed through the 11.9in central touchscreen with menu items like “AMG Performance” and “AMG Track Pace”, accentuating, according to the company, the SL’s sporty character.

As on previous SLs, the new model gets the “Airscarf” system which, through a series of vents, “wraps” warm air around the driver and passenger’s neck like a scarf when the roof is down. The seats are electrically adjustable, and more tightly bolstered AMG Performance seats are available as an option.

Two power options from the same twin-turbo 4-litre V8 engine will be available for starters. The SL 55 4Matic will develop 469bhp while the SL 63 4Matic will develop 577bhp. Power, as the 4Matic bit suggests, is sent to all four wheels — an SL first — via a nine-speed automatic gearbox.

The more powerful model is capable, according to Mercedes of completing the 0-62mph dash in 3.6 seconds and of reaching a top speed of 195mph.

At some point down the line, Mercedes says, hybrid and four-cylinder models will follow but did not provide any further details.

As far as driving is concerned the SL 63 gets a few pieces of technology to improve the experience, but which are also available as options on the SL 55. These include active engine mounts and a limited-slip differential.

While the SL 55 gets a standard suspension with adaptive dampers, the SL 63 features AMG Active Ride Control which incorporates hydraulic anti-roll stabilisation in addition to the adjustable dampers. Four-wheel steering is available on both models.

The latest version of the SL is expected to hit UK roads in the first quarter of 2022 and, though no pricing has yet been announced, expect something in S-Class territory between £85,000 and £100,000 depending on the model.