MORE THAN 20 years after production of the legendary McLaren F1 supercar ended, its designer Gordon Murray has revealed the vital details of what he claims is its spritual successor: the new T.50 — and it’s pretty extraordinary.

With its projected weight of just 980kg, the Gordon Murray Automotive T.50 will be the lightest supercar ever made, it is claimed, and around a third lighter than the average weight for cars of its type. It will even be a chunk lighter than the Aston Martin Valkyrie, which we expect to be around 1,160kg (Aston claims a 1:1 power-to-weight ratio and a total power output of 1,160bhp).

But although the T.50 also has a Cosworth V12 engine at its heart, Murray hasn’t specced it to outperform hypercars like the Valkyrie in terms of acceleration or top speed. His bespoke non-turbocharged 3.9-litre motor produces just 650hp, which is substantially less then the 6.5-litre V12 fitted to the Aston.

“I have absolutely no interest in chasing records for top speed or acceleration,” Murray said. “Our focus is instead on delivering the purest, most rewarding driving experience of any supercar ever built – but, rest assured, it will be quick.”

What the mid-mounted mini-V12 has, though, is revs. Lots of revs. The 12,100rpm red line makes it the highest-revving engine ever used in a production car, it is claimed, and will no doubt ensure that it screams like a banshee when the T.50’s accelerator pedal is mashed to the floor.

Power is sent to the rear wheels via a bespoke ‘H-pattern’ six-speed manual gearbox, a move that “deliberately eschews the twin-clutch solution favoured by many supercar makers”.

Fans of the McLaren F1 will find it hard to ignore the similarity of the T.50’s shape. This is no coincidence, with Gordon Murray Automotive explicitly referring to its new car as the F1’s “spiritual successor”, and the interior layout is similarly derivative: three seats, with the driver positioned in the centre, jet-fighter style, and space for luggage. The cabin is accessed via F1-style dihedral doors, of course.

The way the air flows around the cabin is particularly interesting. F1-derived “ground effect” (managing airflow to create an area of low pressure under the car at speed, sucking it to the asphalt) is a given on any supercar.

What is more unusual is to aid this by fitting a 400mm fan to the rear of the car, a la the famous Brabham BT46B Formula One ‘Fan Car’. Which was a Gordon Murray design, funnily enough.

The addition of the fan helps control underbody airflow without the need for “unsightly” wings, outlets, vents and bulges on the upper surfaces. 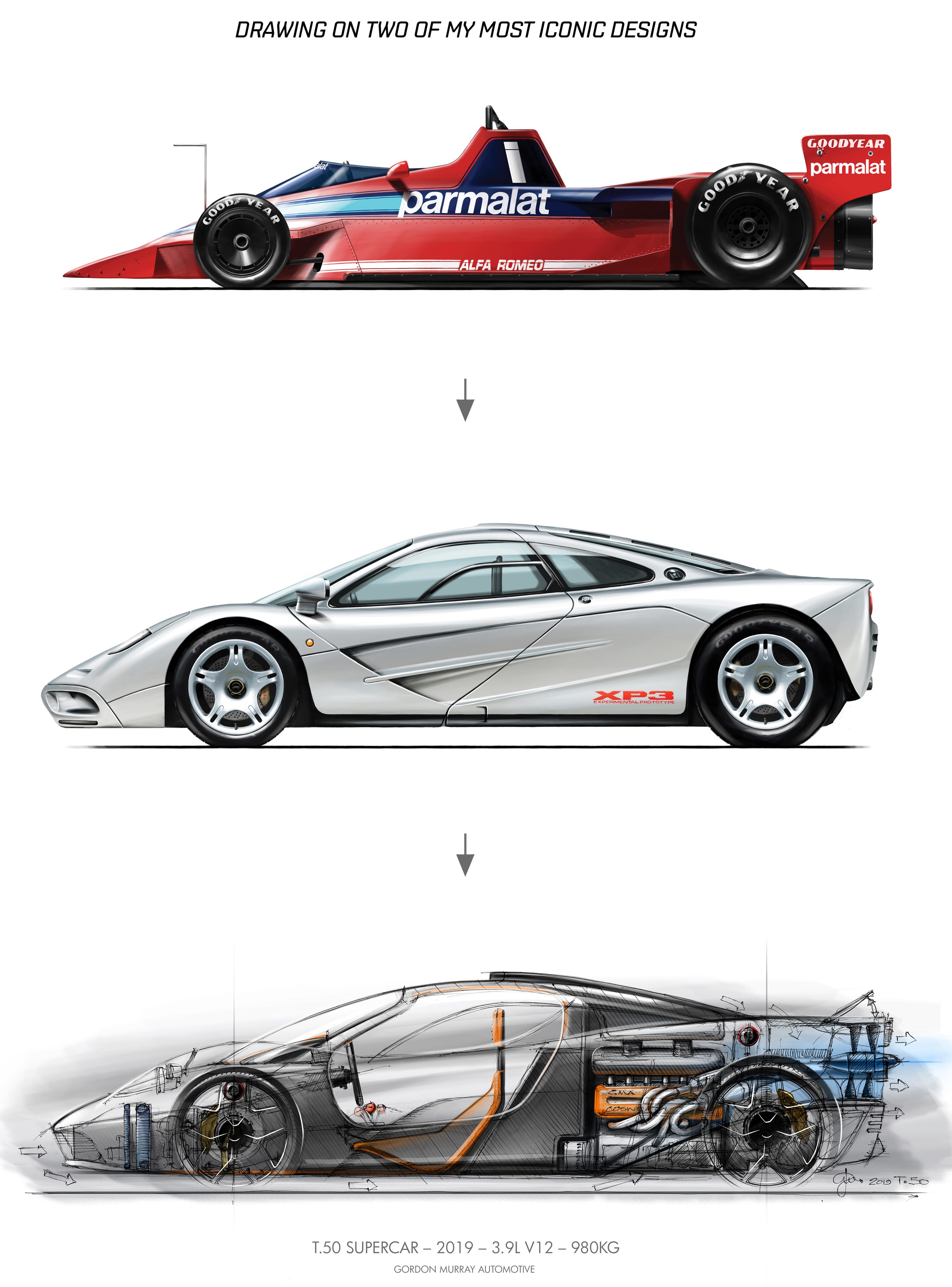 “I designed the F1 as a sort of super GT car,” said Murray, “absolutely road-focused with no plan to go racing, which is why the car set new standards for packaging and luggage space. The T.50 design has the same focus and betters the F1 in every area – ingress and egress; luggage capacity; serviceability; maintenance and suspension set-up. Also, driver-selectable engine maps ensure a driving mode to suit every situation.”

The company says development of T.50 is at an advanced stage, with full production and customer deliveries set to commence in early 2022. But if you want what Murray is describing as “the last, and the greatest, ‘analogue’ supercar ever built”, we recommend making a call today: just 100 are slated to be made.