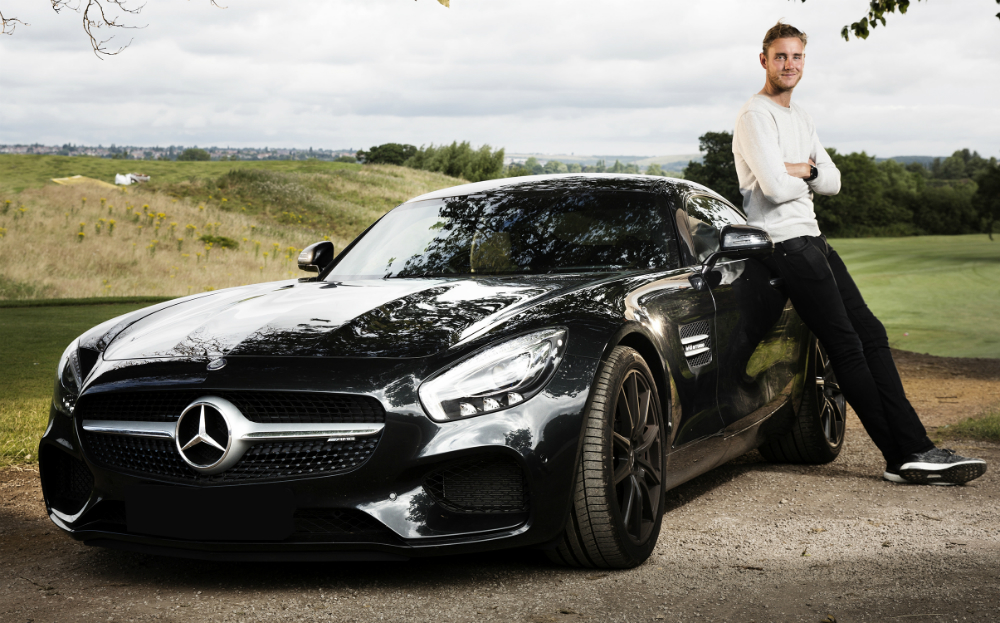 Stuart Broad has the perfect physique for a pace bowler: his 6ft 6in frame can launch a cricket ball down a wicket at 90mph. But he has always struggled for comfort in a small car. “My first motor was a tiny Vauxhall Corsa,” he laughs. “I played for Leicestershire at the time, and driving to away matches was a nightmare. Eventually I took it to a garage so they could remove the seat and refit it further back.”

Broad, 30, and his teammate James Anderson led the England bowling attack this summer against Pakistan. His father was the batsman Chris Broad, a leading light in England’s victorious Ashes team in 1986-7.

“Dad famously hit three consecutive centuries in that Ashes series in Australia,” says Broad, proudly. “He made 26 appearances for England and played for Nottinghamshire. I remember he drove to county matches in a Ford Escort estate and I was forced to listen to Phil Collins in the back. On another occasion he took me to a safari park. A monkey climbed on the bonnet and ripped the wing mirror off. Dad was so distracted he rolled into the car in front.”

Broad went to Oakham School, in Rutland, where he excelled at sport. He was picked to play hockey for England and became a promising rugby player too. “Most family photos show me holding a cricket bat when I was a child. I went everywhere to watch Dad play and once followed him out onto the pitch.”

He failed his driving test first time at 17, after clipping the kerb while parallel parking. “I was so embarrassed at school because everybody knew where I’d been. That spurred me on to pass at the next attempt.”

The Saab 9-3 estate had brilliant seats and a boot that swallowed up all my gear. I was only 21 and thought it was fantastic

After starting his career as a batsman, Broad had a growth spurt in his mid-teens — shooting up from about 5ft 7in to 6ft 5in in the space of little more than a year — and was encouraged to focus on bowling. He turned professional with Leicestershire, before eventually signing for his current team, Nottinghamshire.

“When I started to make an impression at Leicester they arranged for a more comfortable car,” he says. “The Saab 9-3 estate had brilliant seats and a boot that swallowed up all my gear. I was only 21 and thought it was fantastic.”

Broad made his England Test debut in 2007 and was given a Volkswagen Touareg SUV. “Then the team signed a contract with Jaguar in 2009 and I was able to pick a black XKR, with black wheels. It was superb to drive.”

The Jaguar also better fitted his growing reputation as cricket’s answer to David Beckham, with his boyband good looks and string of glamorous girlfriends. Then, in 2014, he swapped it for the F-type coupé, a hit with his now longtime girlfriend Bealey Mitchell, a lingerie model. “I bought a second-hand Range Rover Sport the year before, but Bealey only wanted to go in the Jag,” he says.

The England cricket team now have a sponsorship deal with Toyota, and Broad has a Land Cruiser that he uses for official duties. He spends more than 280 nights a year away from the Nottingham home he shares with Mitchell. This autumn he will go on tour to Bangladesh and India. “I’ll miss her and my cars — especially as I’ve just bought a Mercedes GT S.”

Stuart Broad: My life in cars