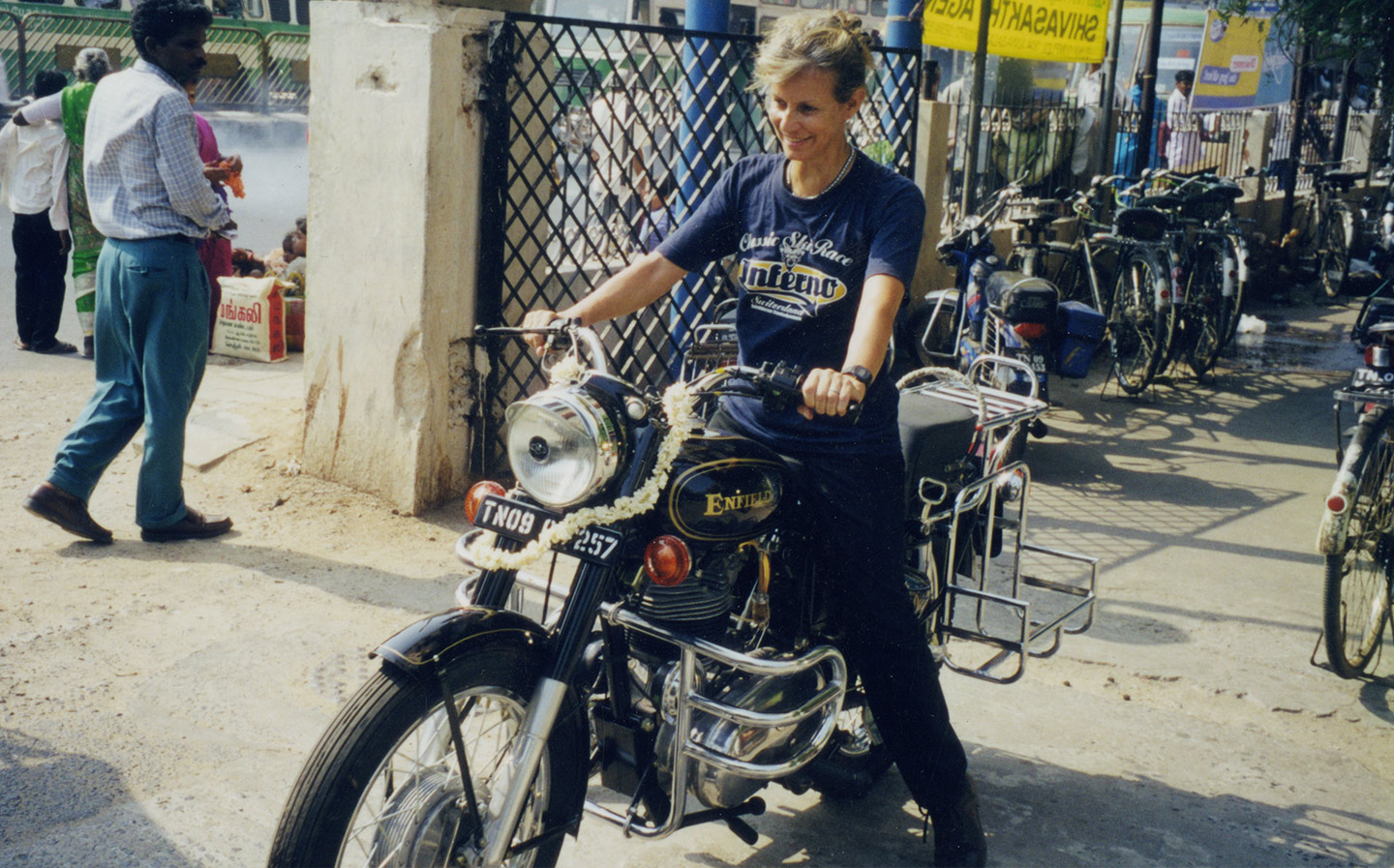 Jacqui proudly taking ownership of her Enfield in Chennai 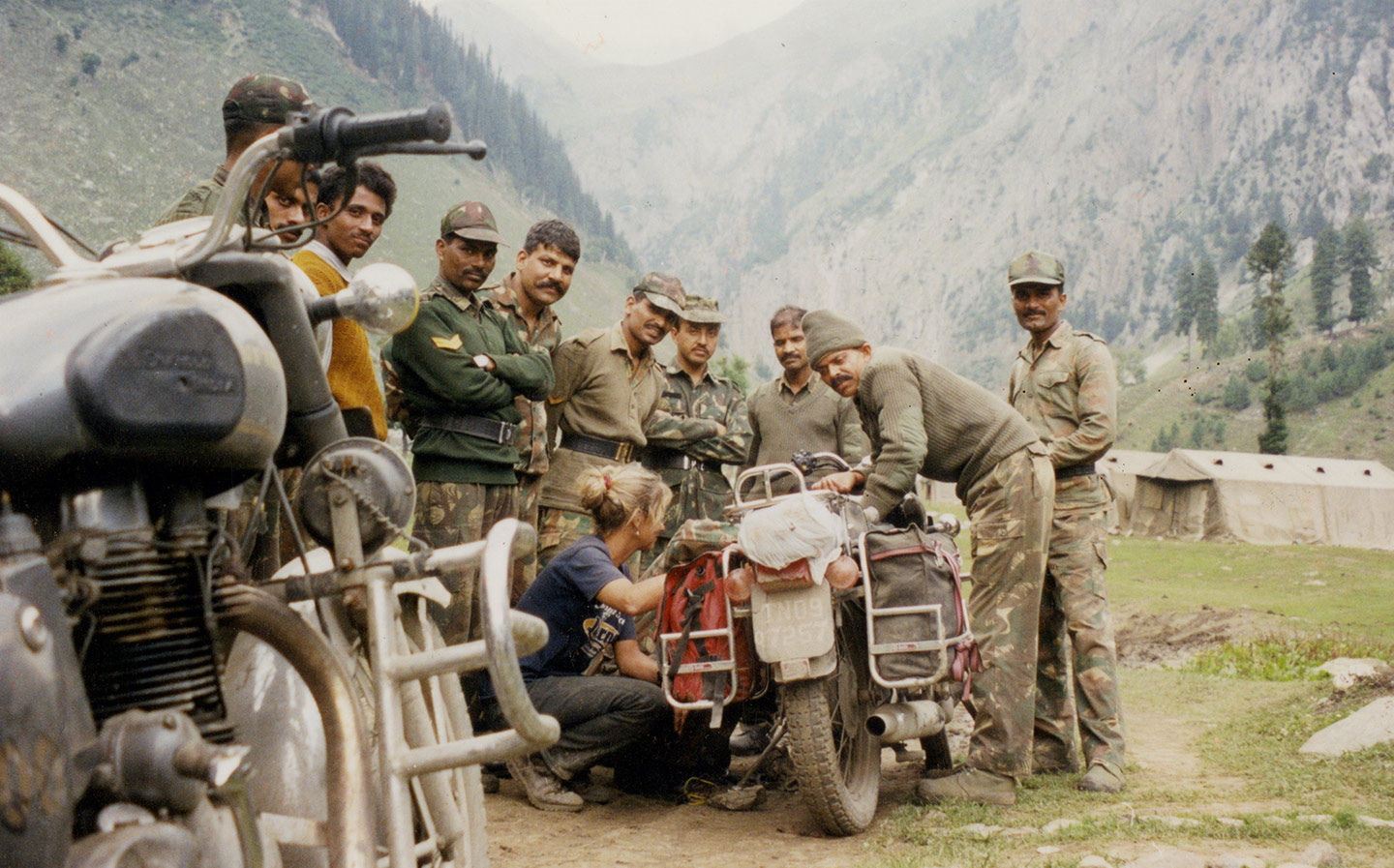 Jacqui receives assistance from a group of soldiers in the mountains of Kashmir, in 2000

I WAS in the Karakoram mountains in Pakistan and I’d made my way there on a hired donkey. For three nights I slept in a goatherd’s hut under a sky filled with stars. It was just one of many magical moments in my seven-year adventure motorbiking around the world.

I was 48 and living and working in Stoke-on-Trent as a health visitor when I first went backpacking. My marriage had ended and my two grown-up daughters had left the nest. My ex-husband and I had always talked about travelling together when we retired, but I ended up doing it alone and much earlier than planned.

I’d always been curious about seeing the world. My brother and I were lucky to have parents who never told us to be careful, so, despite finding myself alone and approaching 50, I went to Trailfinders and bought a year-long round-the-world ticket.

My mum sent me off with goodwill and said: “You do my travelling for me.” My friends thought I was odd or brave, or a mixture of both.

I started in Bangkok, and then made my way through southeast Asia and Pakistan, before moving on to India. It was there, in a restaurant in Jaisalmer, that I met a Dutchman 17 years my junior who was travelling through the country by motorbike.

Hendrikus convinced me to join him on the back of his bike. I’d seen enough of India by that stage for that kind of proposition to be normal. We spent four amazing days camping in the desert — just as friends — and then I flew to meet my daughter, who was visiting Goa.

After a year, I returned home to live at my mum’s house in Bristol and worked as a hostel manager. Eight months later I received an unsigned letter through the door, asking me to be at a certain cafe at a certain time. I had no idea who had sent it.

“I was knocked off my bike in Pakistan and broke my leg, and was nursed back to health by a troupe of comedy actors”

When I got there, Hendrikus was waiting. I was shocked and delighted to see him. He said he hadn’t been able to forget about me and asked me to join him again on his travels. I had a motorbike licence and had been finding it difficult settling back into life at home, so without hesitation I flew to Madras and bought myself an Enfield bike for my 50th birthday.

We spent the next four years exploring the world, during which I had some hairy escapades. I was knocked off my bike in Pakistan, broke my leg and was nursed back to health by a troupe of comedy actors. In Malaysia, Hendrikus and I separated for a while. He travelled to Australia, where I eventually joined him — I’d met a skipper who was sailing there. I put the bike on his catamaran and agreed to split the work and expenses.

It was an eventful voyage. We got caught up in very frightening storms in the Strait of Malacca, picked up five poor souls clinging to bits of flotsam in the sea and were robbed by pirates. The captain of the catamaran turned out to be a rather scary man. He said I was bad luck and threatened to kill me, so I always slept with a knife under my pillow. We parted ways at Jakarta, in Indonesia, and I went on to Australia from there.

There were times when I questioned what I was doing. Should I really be driving an antique motorbike through jungles when I ought to be saving for a pension? But for every scary moment, there were plenty more wonderful experiences. Like the time Hendrikus and I were in the Hunza, in Pakistan.

We went to explore a valley famous for its apricots, and a couple invited us to join them for a cup of chai. They picked some rosy red apples and apricots from their garden and shared bread and homemade cheese with us. We all sat smiling at each other and it was a moment of utter contentment. All over the world, I encountered this kind of hospitality.

When Hendrikus decided to stay on in Australia, we parted company, and I continued on my journey. I was just as happy travelling on my own. People talk to you more. They think you might be lonely, which I never was.

I travelled through 20 countries, including Ecuador, Colombia, Laos and Cambodia. Pakistan, India and Australia were my favourites, simply because of the contrast they each offered. I’d spend a week in the outback and not see a soul, whereas in India you can’t get away from people.

Coming back to Britain was hard at first. It took a long time to settle down, but I have a wonderful family and I’m happy to be home. I’m now 66 and semi-retired and do the odd bit of nursing, but I regularly meet other backpacking motorcyclists. I’m also writing about my travels. Besides, the bike and I still go everywhere together. Since I’ve returned, we’ve been all over Spain, France, Morocco and Portugal. The adventures aren’t over yet.

This article first appeared in The Sunday Times Magazine