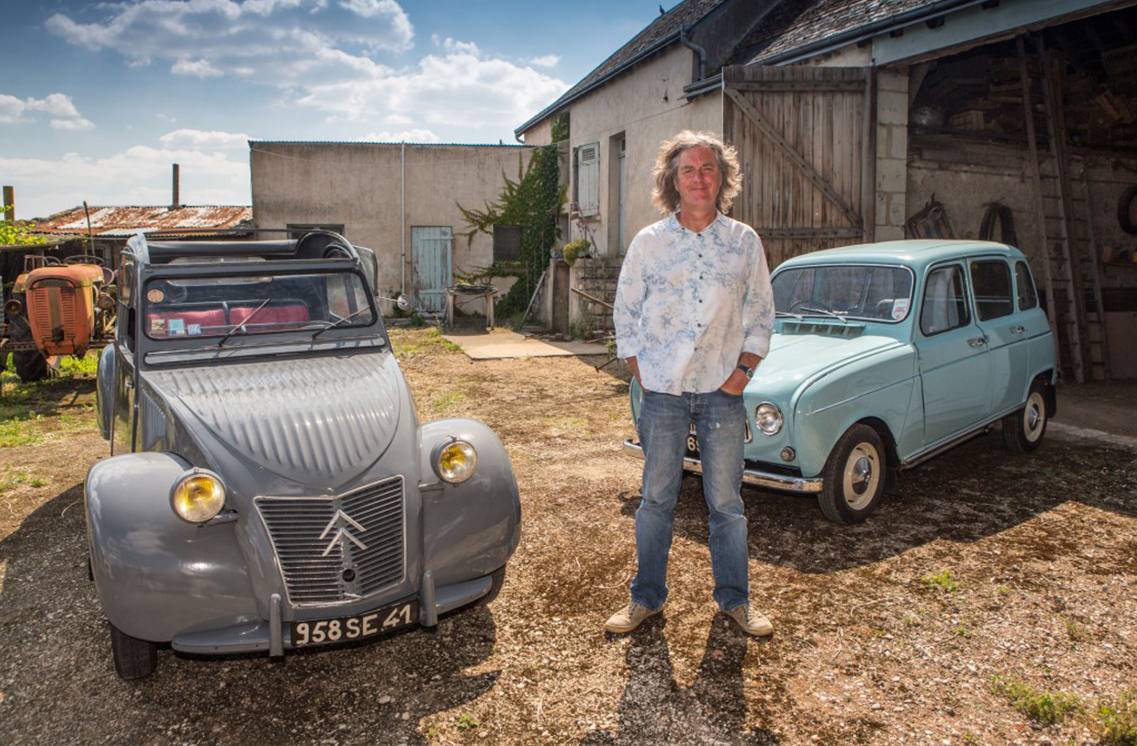 CARS OF the people sounds like a mantra from a proletariat uprising. If only history were that simple.

In fact, what I regard as the first true people’s car was a socio-political initiative by an oppressive regime. I mean the Volkswagen Beetle, the vehicle that came to popularise the term people’s car (although it didn’t create it — the idea had been kicking around in Germany for a while). The KdF Wagen (Kraft durch Freude — German for strength through joy), as the Beetle was then known, turned out to be a Reich rip-off.

National socialism’s foray into motor trading made Dame Shirley Porter’s sale of homes for votes look no worse than a game of knock down Ginger on a Westminster council estate.

Would-be buyers of the car paid for stamps to stick in a savings book with the idea that the book, when full, would be redeemed for the car. Instead, the Beetle factory was converted to produce the Kübelwagen (a military vehicle that was to the Germans what the Willys jeep was to the allies) and the customers never received the cars they had been promised.

The car bores will ask why I haven’t yet mentioned the Ford Model T. It does appear in my three-part series Cars of the People — starting on BBC2 at 9pm tonight — but only briefly. To start with, it has all been said many times before, and I wanted to avoid driving one because there always comes a moment, as an unexpected hazard emerges, when you forget which lever to pull or pedal to press.

No, the people’s car story begins in earnest in the 1930s, when the possibility of cars for all was first recognised outside America. Hitler was a great admirer of Henry Ford — and, more worryingly, vice versa. So we start with the Beetle.

Motoring becomes the new opiate and a means of controlling the masses, buying their fealty, or liberating and empowering them. It depends on which country and which decade you’re in.

The Beetle is the most interesting and scandalous car of all time and one worthy of three hours of telly on its own. But we must move on to Lada, VEB Sachsenring Automobilewerke — the maker of the Trabant — and the fledgling Subaru, to name just a few. 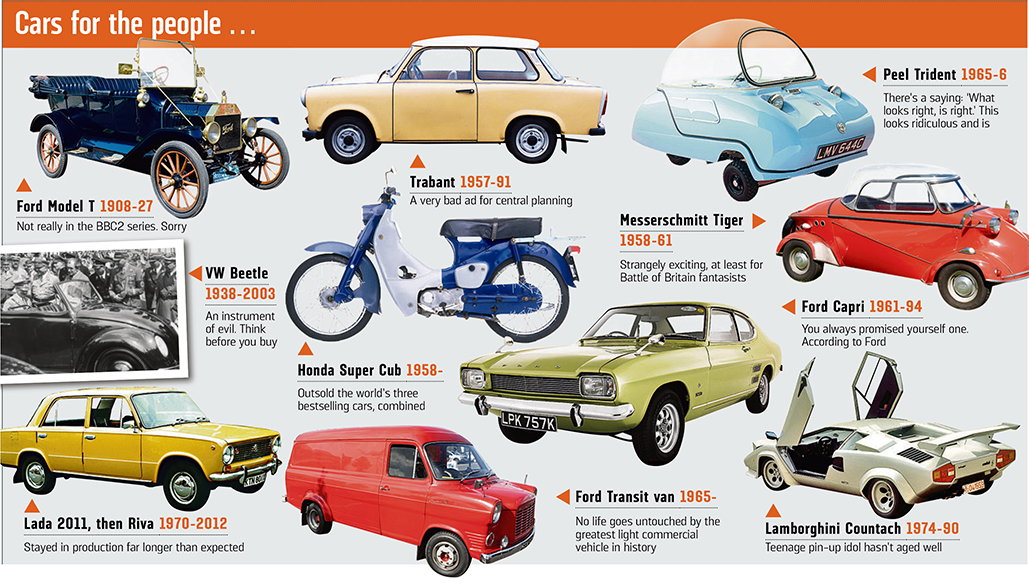 A true people’s car was one attainable by those who never imagined they could own such a thing — or would even be allowed to. But once that point was passed and car ownership became more of an assumption than a privilege, the definition changed.

The people’s car became a matter of aspiration, with a hint of working-class hero — more Lennon than Leninist. Ford reasserted itself here, with the Mustang and Capri, svelte coupé forms previously the preserve of the toffs but now available to the plebs at saloon-car prices.

Rolls-Royce, too, fell into hands with dirty fingernails, a victim of its own arrogance and overproduction. The classic Shadow, originally a symbol of plutocracy, has become the plaything of hobbyists with a distinctly limited budget, driven with a hint of irony, in the way peaceniks wear army surplus combat jackets. 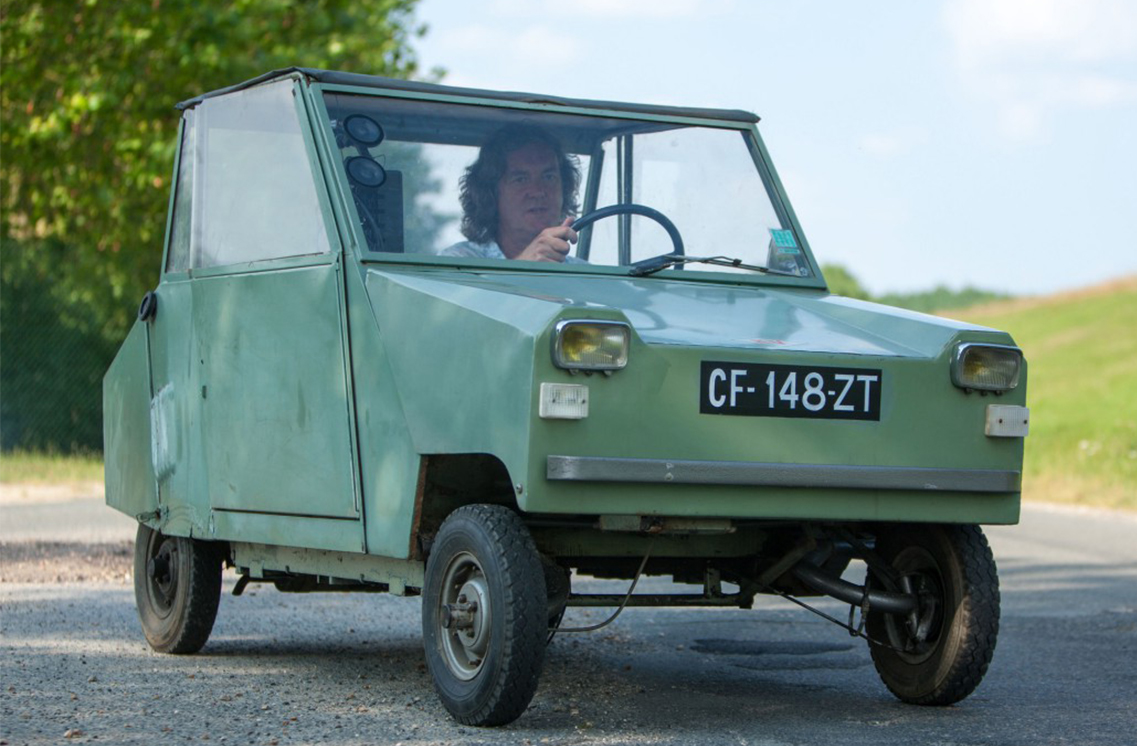 In between there are the likes of a Zündapp car that’s the same at both ends, the inevitable Reliant and a funny French thing made from tin.

I’ve tried to avoid the obvious clichés of Model T, Austin 7, Mini and Toyota Corolla. I’ve been deliberately bloody-minded about the definition of people’s car in order to explore some shadier corners of the meaning of the tired old phrase. That’s why there’s a motorcycle in the series. And a van.

There’s also a lot that isn’t there but probably should be. The sport ute of Australia springs to mind, as does the original Toyota Land Cruiser. India’s Maruti factory would be worthy of study — the only one I’ve visited running at more than 100% capacity — and the Tata Nano gets only a brief mention.

Still, it has been an automotive riot, and a revealing one: weeks of travelling the world driving almost exclusively crap cars. There’s more if anyone wants it, because, as I’ve hinted, people’s car is an expression open to reinterpretation, in the best traditions of historical research.