WHAT’S THE best car in the world? That is easy: it’s the Ferrari 458 Italia. It’s beautiful and exciting and occupies a perfect central position on a spectrum representing at one end total transport pragmatism and at the other unusable and unaffordable exoticism. The 458 is in the sweet spot.

But the most significant car of all time? That’s a bit harder, and it was the brief for my Cars that Changed the World walk-through exhibition at last week’s London Classic Car Show. With space for just a dozen cars, ruthlessness was demanded. So I’m afraid the Jaguar E-type was out, and so was the Austin 7. The Range Rover as well, and the Audi quattro, the “Blower” Bentley, the Ford Escort RS1800, the Citroën DS and many other cars suggested to me, thank you. And the Volkswagen Golf GTI. Sorry.

In the end I settled on six cars that you would expect to find in such a show — among them the Ford Model T and the VW Beetle — and six more that I believe deserve greater recognition, including Josef Ganz’s Standard Superior (or what’s left of it) and, well, the Honda Civic. And then, in a darkened antechamber, I displayed the car that I believed, above all others, advanced the state of motoring: #the13thcar. I chose the Corgi James Bond Aston Martin DB5. (It’s item No 261 in the 1965 Corgi catalogue, if anyone’s interested.)

Look, childhood is formative, and those of us who love cars loved them first as die-cast toys. In the first year of production more than 2.5m Corgi Bond Astons were sold, making it the fastest-selling car of all time. It was revised and enlarged in 1968 ( No 270, toy nerds) and is about to be relaunched again as a 50th-anniversary tribute. It has therefore been more formative than any other toy car. QED. 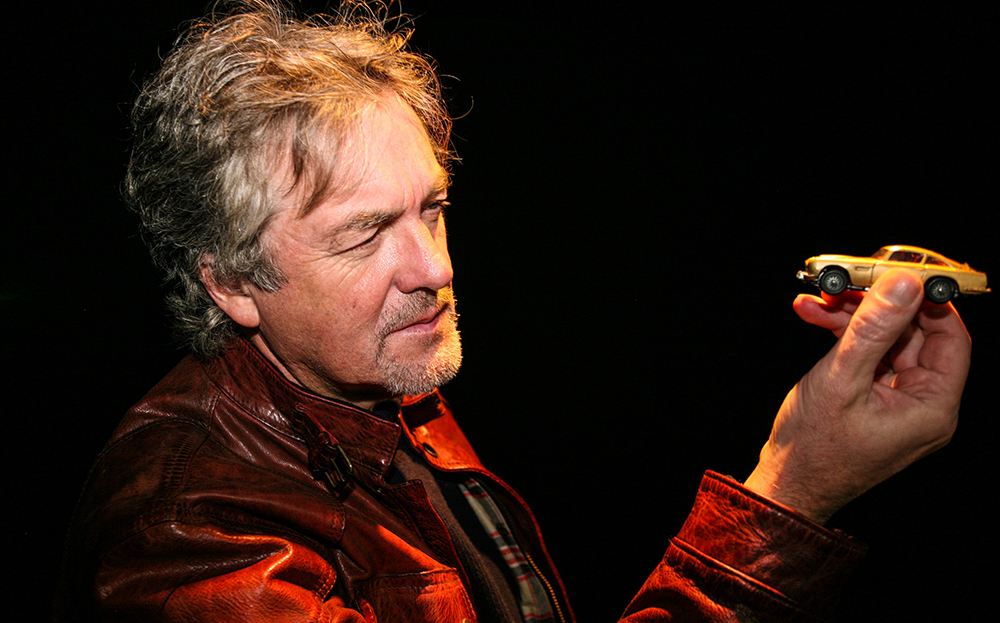 The popularity of the Bond Corgi is simple to analyse. It wasn’t just the association with the film Goldfinger, and it certainly wasn’t fidelity. It’s the wrong colour, for a start. Apparently Corgi’s marketing team didn’t like the proposed — and cinematically authentic — silver finish because it looked too much like the raw zinc alloy of the unpainted body, so a hasty decision was made to paint it gold as a nod to the film’s title.

Classic car bores will also want me to point out that the back of this supposed DB5 is all wrong: the rear lights are too small and the fuel filler cap is in the wrong place, the result of some tooling design from Corgi’s DB4 model being carried over.

The real reason is this. It may not seem it when compared with the iPad, but by the standards of 1965 the Corgi Bond DB5 was a gadget-laden miracle. Rival toy makers were amazed by how much functionality Corgi had worked into a 1:46 scale model a mere 4in long.

It is the working ejector seat that is so deeply ingrained in the consciousness of people about my age. It was an unimaginable marvel

There was the full glazing, detailed interior and working suspension that already characterised Corgi’s cars. Better still, pressing a small button under the left-hand sill extended the front overriders and the two machineguns hidden behind the grille. Pressing the twin exhaust pipes raised the bulletproof shield from the boot. And, most important, pressing another button on the side made the roof spring open and ejected the gun-toting baddie from the passenger seat. Wowzers! Or whatever we said back then.

It is the working ejector seat that is so deeply ingrained in the consciousness of people about my age. It was an unimaginable marvel, albeit one that caused as much frustration as delight.

The problem was that the ejection system was just too powerful. From rewatching Goldfinger I calculate that at 1:46 scale the plastic baddie should be propelled maybe 3in into the air. So I don’t really know what Corgi was thinking back in 1965. It seems to have acquired a job lot of leftover springs from the Lee-Enfield rifle-bolt factory, which were strong enough to send him into low Earth orbit. Even after half a century lying compressed in a loft, the spring in a Corgi Bond DB5 is a lethally primed contraption that clicks menacingly like a pistol in a mock execution. 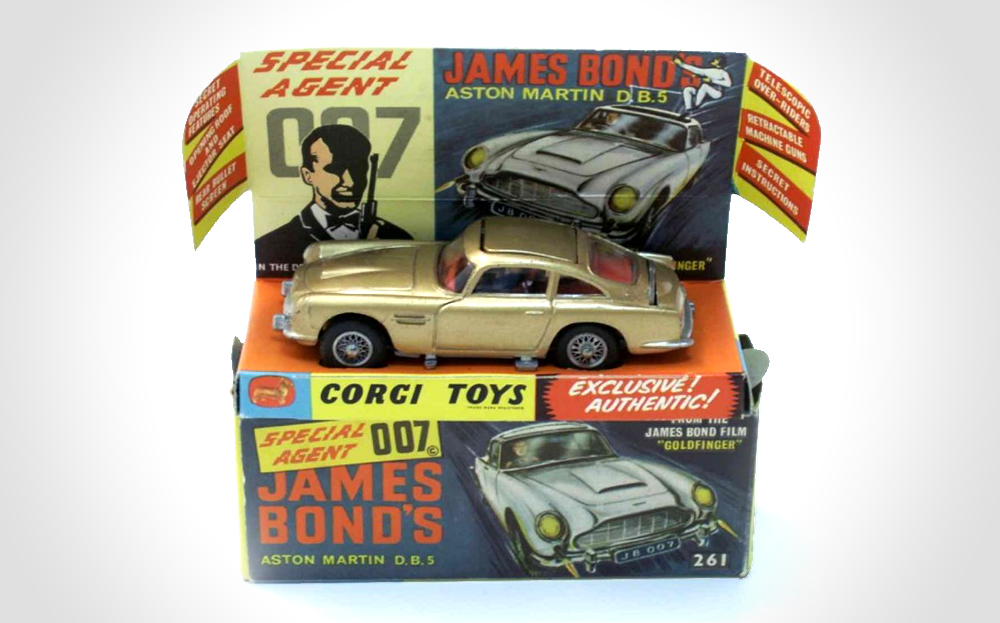 In fact, the ejection of the baddie from a Corgi Bond DB5 is a quantum event. He is in the seat and then he is somewhere else altogether — there being no discernible transitional phase between the two states. Where did he go? Into the vacuum cleaner. If art imitates the experience of life, then the film should be re-edited so the baddie is ejected by Sean Connery’s 007 and then finished off by a Hoover the size of a skyscraper.

As it was, the baddie’s supersonic upward trajectory was arrested only by the ceiling (unless you played with your toys outside, in which case he was in your neighbour’s garden), from where he would fall to the dark and heavily patterned carpet that characterised the 1960s and 1970s and become invisible. He was, you remember, less than an inch long and not even a complete man, all of his legs below the shins having being sacrificed to make way for the mechanism. From the Hoover bag he made his way to the dustbin and a rubbish tip far, far away.

I imagine there are millions of them still locked in the earth because he almost certainly wasn’t biodegradable. Earnest archeologists of the post-apocalyptic world will find one, gently remove the bag fluff with their paintbrushes and ask what it can possibly be. Then for hundreds of years people will find more exactly the same all over the world. They will conclude that he is the votive icon of some forgotten global religion rather than a tiny plastic manifestation of the most crashing disappointment of childhood.

The ejection of the baddie from a Corgi Bond DB5 is a quantum event. He is in the seat and then he is somewhere else altogether — there being no discernible transitional phase between the two states. Where did he go? Into the vacuum cleaner.

It was depressingly easy to lose the baddie. When you picked the car up, your thumb fell naturally onto the little trigger. Plink! He was gone, for ever. Countless children must have ejected him while eagerly extracting the toy from its box, never to see him again. While we were working on the exhibition, one of my colleagues accidentally fired the baddie from our Corgi into the infinite void of an open-plan office. It took the entire staff two hours to find him.

Was anything else ever so easily lost? I can’t think of anything. As children we would come to lose many other things — faith, innocence, virginity — but nothing was lost as simply as the baddie from a Corgi Bond DB5. There are no official statistics on casualties, but it seems reasonable to assume that the vast majority of them were lost within a few firings, maybe after one, and often within the first few hours of ownership. The toll for Christmas Day 1965 probably puts history’s worst battles in the shade.

And the people at Corgi knew they were selling children a spring-loaded tragedy in waiting. They knew, the bastards, because the second-generation Bond DB5 was sold with a spare baddie. But why just one? You needed a bagful.

This is the other respect in which the Corgi Bond Aston is such an important vehicle. Yes, it instilled in many of us an unshakeable enthusiasm for cars, but it also helped to prepare us for dealing with the harsh reality of adulthood. You would not, after all, be a professional footballer or rock star, you would never see Deborah from next door naked and the little man from your Corgi DB5 would never be found. Like so many of the things we held dear and people we loved, he became landfill. 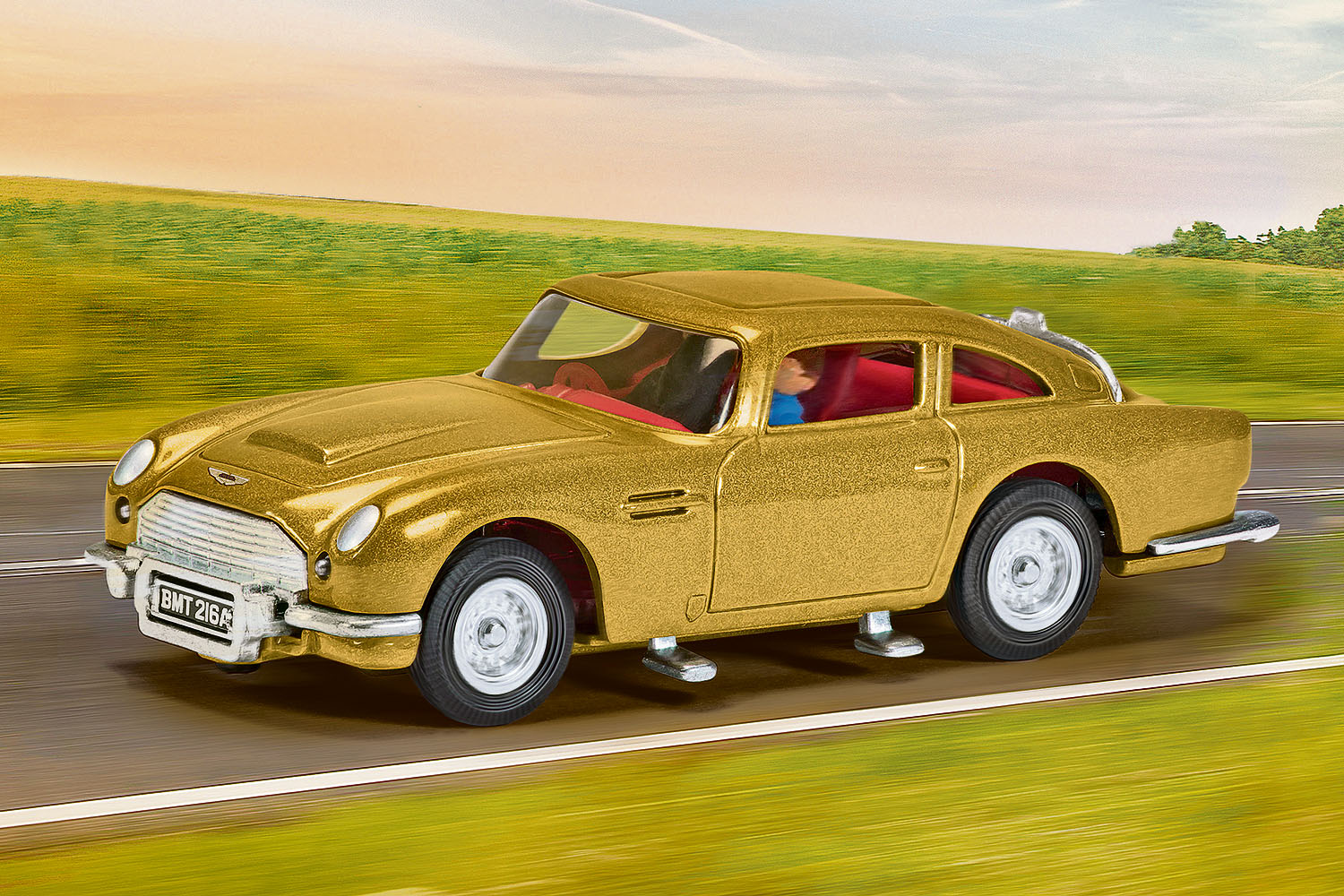 Consider this: during my research for the exhibition, I did not meet a single former owner of a Corgi Bond DB5 who hadn’t lost the little man. That’s why today a mint example of model No 261, complete with box, the printed sheet of “secret instructions” and an original baddie — not one of the many reproduction ones that are perforce available — is worth hundreds of pounds, even though it was produced by the million and originally sold for 9s 11d (less than 50p, or roughly £8.40 today).

There is a more upbeat side to all this, though. Aston Martin, we know, has existed for more than 100 years under conditions of constant commercial brinkmanship. It is often said that the tie-in with Bond and Goldfinger saved the company during one of its more parlous periods. Yet in the long term I think it’s the toy that saved Aston.

People I know of my age who are now in a position finally to buy “a nice car” are inevitably drawn to Astons. Some of it is to do with Britishness, some of it with Bond fantasies, but largely, I suspect, it’s the influence of this most iconic of toy cars. Without Corgi we might not have Aston Martin.

The car that kept Aston in business