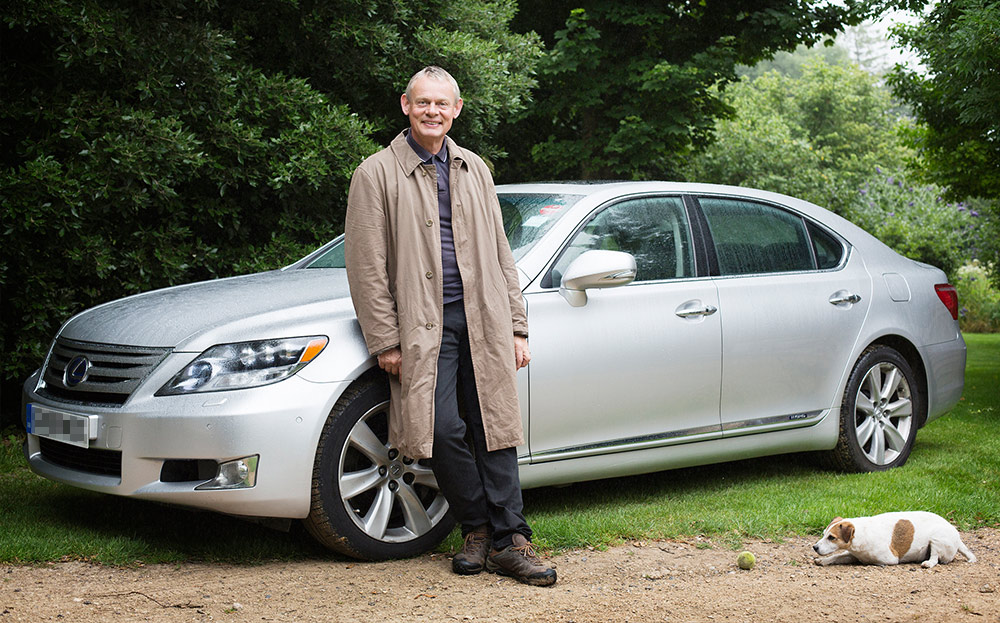 MARTIN CLUNES has a deep love of horsepower — the mechanical and the four-legged variety. When he’s not behind the wheel of his BMW or Lexus, the actor can be seen driving a pony and trap around his Dorset farm. “I like big petrol engines and big horses,” says Clunes. “I’m really just a closet car enthusiast who likes to mess about on a farm.”

Best known for his roles in the hit 1990s sitcom Men Behaving Badly and the current ITV comedy drama Doc Martin, Clunes says his attachment to cars began inside the boot of a blue Austin A40. He would crawl into it during the drive from his Wimbledon home to his boarding school in Surrey. “I used to have a den I’d crawl into in the boot, with posters stuck to the boot lid,” he says. “It wouldn’t be allowed these days but I felt safe there.”

Boarding school came just a year after Clunes’s father, Alec, a classical actor, died from cancer. He found school “pretty brutal”, underperformed and was forced to sleep in the matron’s room because of bed-wetting.

Perhaps craving a more macho image, he developed a love of motorbikes. At weekends he would visit a motorcycle showroom in Tooting, southwest London, and sit on his dream bike — a BMW tourer. His first set of wheels was a Yamaha moped, from which he “popped off” a few times but escaped serious injury.

He bought his first car, an old Hillman Minx, before he even had a licence. “It cost me £20 from a bloke in a pub. It had a crack in the radiator but I worked out that I could drive from Wimbledon to Putney before it overheated.”

By the time he bought his next car, he had embarked on an acting career (he made his television debut in 1983 as an alien prince in Doctor Who). “I chose something more reliable: an Audi 100 that felt big and continental.”

When it was written off after a crash, he switched to a BMW E3 saloon he had seen for sale in the BBC car park. His passion for Citroën CXs began a few years before Men Behaving Badly. He owned three in a row, passing one on to a girlfriend and swapping one for a tennis racket.

“My Hillman Minx had a crack in the radiator but I worked out that I could drive from Wimbledon to Putney before it overheated.”

In 1997 Clunes married Philippa Braithwaite, now the producer of Doc Martin. Their daughter, Emily, was born in 1999, and Clunes bought a “sensible” BMW 318i, but he soon switched to a “fabulously fast” BMW 540i and, later, a 650i coupé. In 2012 his licence was suspended for a year after he accrued 12 penalty points for speeding and he was unceremoniously dropped from an advertising contract with Churchill car insurance.

Life is slower down on the farm in Dorset. Here, when not driving the pony and trap, he has favoured a string of old VW camper vans. “My favourite van dated back to 1969 and had just 3,000 miles on the clock. I paid £10,000 at auction. The interior was all chrome, and I wasn’t going to leave the sale without it. A few years later it sold for £22,000.”

Today Clunes will host the ninth Buckham Fair, a charity event featuring some vintage cars and scooters on his land. He will show his prized Clydesdale horses.

Clunes clearly enjoys country life, but visitors might catch glimpses of his other existence. His latest car is the Lexus saloon he drives in Doc Martin. “They originally wanted me to have an MGB, but I’m 6ft 3in tall. I would have looked a tit behind the wheel.”

Buckham Fair, in Beaminster, Dorset, was on Sunday (buckhamfair.co.uk)

Martin Clunes: my life in cars