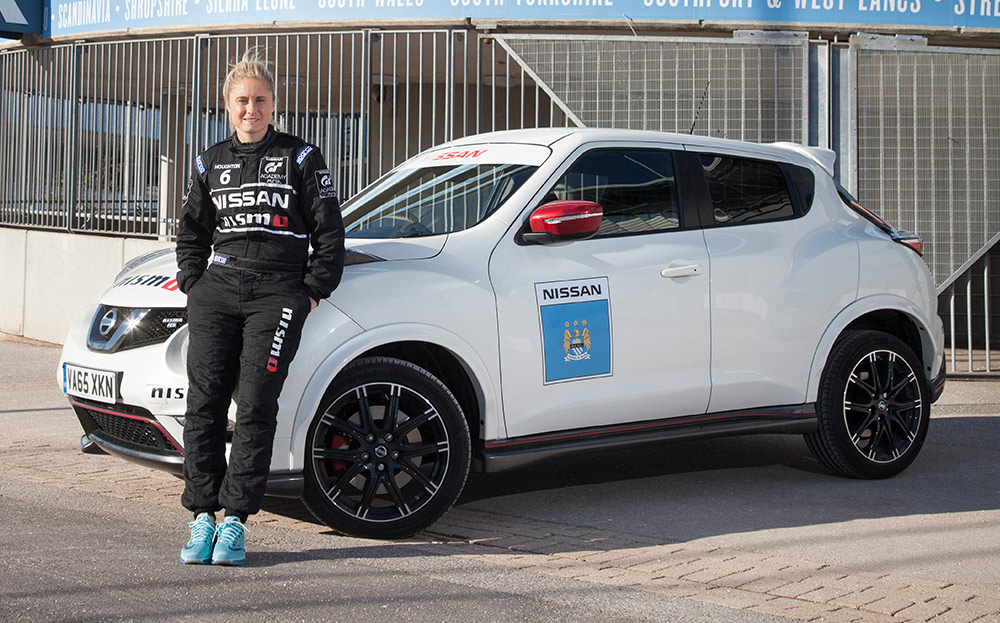 STEPH Houghton, the captain of the England women’s football team, shot to fame when she scored the winning goal for Team GB against Brazil at Wembley during the 2012 Olympics.

Last year, she led England to a bronze medal in the women’s World Cup in Canada, and helped secure the runners-up position for Manchester City in the Women’s Super League. Earlier this year she was appointed an MBE.

Unlike the millionaire players in the England men’s team, however, she has yet to get her hands on an Aston Martin, Bentley or other luxury car. Houghton, 27, drives a BMW 1-series. Is it evidence of a gender gap? Not at all, she says.

“I’ve always wanted to own a BMW,” says Houghton. “Yeah, of course we see all the posh cars in the car park. It’s quite nice looking at them all, the Lamborghinis, the Range Rovers and everything.

“Yes, I suppose I would love a Range Rover. But there’s no jealousy. We understand how it is with male and female football and it’s not about who’s got what, it’s all about being successful.”

“Gender gap? There’s no jealousy. With male and female football it’s not about who’s got what, it’s all about being successful”

It’s what she has wanted since, as a toddler, she began kicking a ball around the yard in South Hetton, a former mining village in Co Durham, with her father, an electrician and former semi-professional footballer.

At school, she played football with the boys as well as the girls and grew up idolising David Beckham and watching Bend It Like Beckham, the 2002 film about girls’ football, starring Keira Knightley. She was ferried to games in her parents’ Ford Mondeo then, later, a Peugeot 306: “It was sky blue. We all wanted a red one, but Mam’s the boss and she wanted blue.”

Houghton passed her driving test aged 17. “Nana and Grandad gave me their old Renault Clio, which I loved,” she recalls.

She studied sports science at Loughborough University and in 2007 left Sunderland, where, at 14, she had debuted with the first team, for Leeds. She helped her new club win the FA Women’s Premier League Cup in 2010. “That was also the year I had a second-hand Vauxhall Corsa,” she says.

“There was a gearbox problem and I remember driving it to Leeds for a match and for the last 20 minutes the whole car was shaking. I really should have stopped, but I didn’t want to be late; I knew I’d be fined.”

That same year she moved to Arsenal. In 2014, as the women’s game began to expand, Houghton joined Manchester City in the Women’s Super League (the equivalent of the men’s Premier League). For the first time, she was able to focus solely on football, quitting her part-time job at Hertfordshire University.

Between her England and Manchester City contracts and sponsorship deals, she earns an estimated £65,000 a year. She lives with Stephen Darby, captain of Bradford City in League One, and if cars are anything to go by, their wages don’t appear to be too mismatched. “He has a BMW 1-series as well,” she laughs.

She and City teammates had a racing lesson in a Nissan Juke Nismo (Nissan is a City sponsor), with a professional driver around a temporary track in the Etihad stadium car park. “It was an unbelievable experience,” she says. “It got a bit competitive. I lost control of the car for a second and came third. I was a bit miffed.”

STEPH HOUGHTON: MY LIFE IN CARS