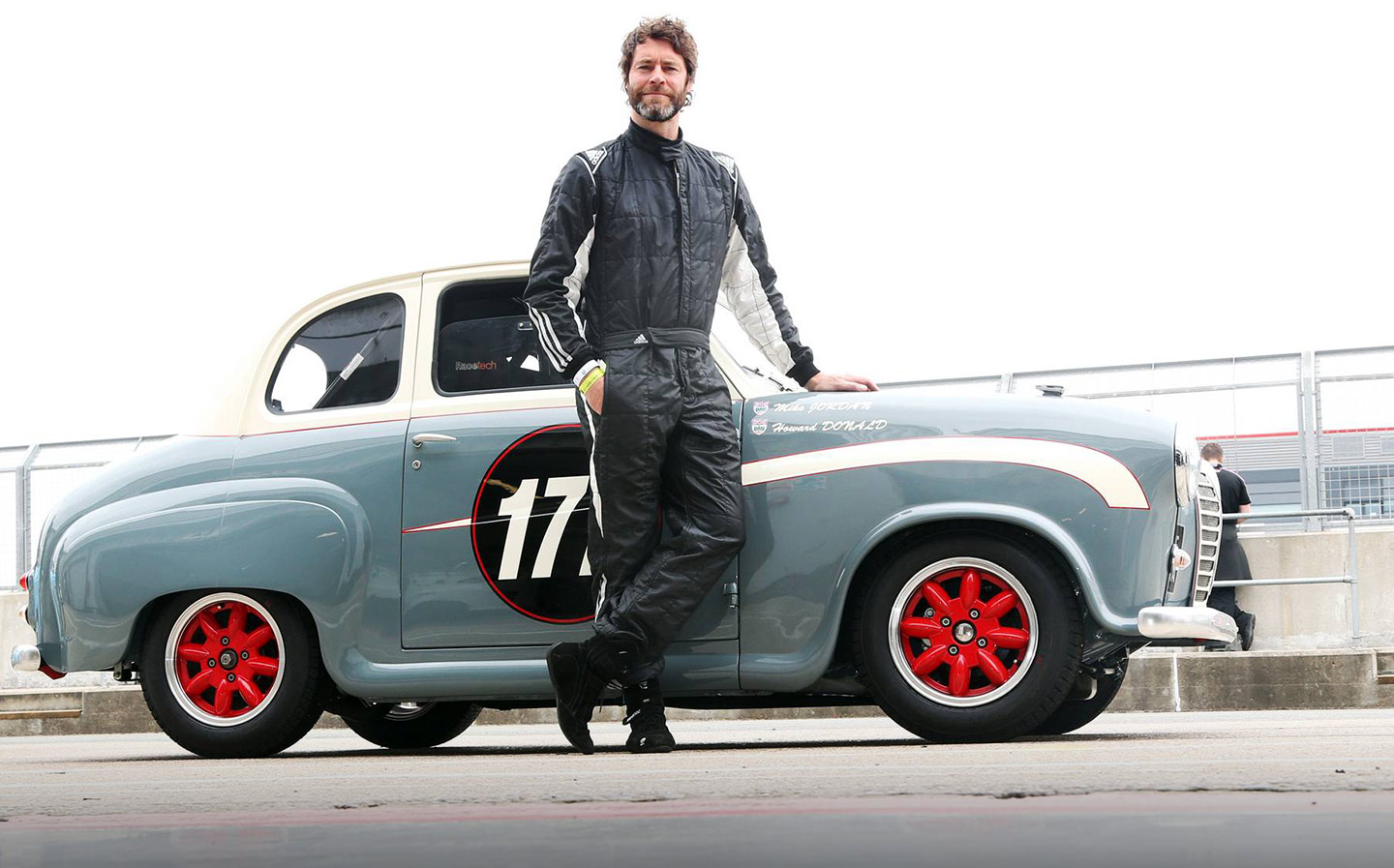 IT’S FAIR to say Howard Donald is a little nervous about taking part in this weekend’s Celebrity Challenge Trophy race at this weekend’s Silverstone Classic: “It’s my first race and I’m s***ting a brick.”

The Take That star is talking to Driving.co.uk from the UK’s premier circuit in Northampstonshire, where he’s been putting in some practice laps ahead of the Saturday’s event. The race will see big names from sport and entertainment, such as boxer Car Froch, businessman Theo Paphitis and Olympic Cyclist Jason Kenny (interviewed here), mix with well-known racers behind the wheels of race spec Austin A30s and A35s from the 1950s.

They’re little cars but they get a frenetic workout at similar events, and Donald’s lack of track experience – he’s never driven one before – seems to be playing on his mind: “It’s a tricky little car … such a sweet car, but it could probably bite you.”

Mind you, the musician may be being modest.  “I’ve got a couple of cars that I do track days in,” he admits. “And I’ve had a couple of lessons off a guy called Simon Hadfield. He’s always said I should get into racing; this is my toe in the door.”

Donald, 49, shot to fame in the early 1990s as part of the phenomenon that is Take That, a Manchester male vocal pop group originally also comprising Gary Barlow, Mark Owen, Jason Orange, and Robbie Williams. Donald got the gig after taking time off from his vehicle painting job.

After three top-selling albums (two of which topped the UK album charts), Williams left the band to go solo in 1995 and Take That officially split in 1996. “It was fun but it was fast,” says Donald. “Too fast to enjoy yourself and chill out. Everything was about Take That and there was no other life. Even girlfriends were put on hold; you couldn’t even tie one down.”

“Every time we used to stop at a garage in the Fiesta, I used to put about £1.50 worth of petrol in it. Times were hard!”

His first car was a Talbot Sunbeam-Lotus, but it didn’t last long. “I wrote it off along with another five cars. It was my fault,” he admits. “I was too busy taking the piss out of someone while I was driving, it was raining and all of a sudden I saw that three cars braked to turn right on the dual carriageway. I put my anchors on, carried on skidding – no ABS, obviously, on those little sheds – went into one, which hit the other, which hit the other one and my back end went into another car, which went off the road.”

After the Talbot he bought a Mini: “It was amazing, with bucket seats, sports wheels, a sports steering wheel, an antique dash with a big clock in the middle and a blue vinyl roof. It only cost about 300 quid. It ended up with the suspension getting knackered at the back because I used to try and fit three people in there; it only went about 20 miles an hour up a hill. It wasn’t very powerful – it didn’t have a sports engine – but it was a cracking car.”

A Ford Fiesta followed, which he used in the early days of Take That to drive the group to gigs. “Gary wrote in his book that every time we used to stop at a garage in the Fiesta, I used to put about £1.50 worth of petrol in it. Times were hard!”

A Vauxhall Astra followed but success arrived quickly and Donald was able to buy a couple of Mercedes – a 190 (“loved that car”) and then an SL500 – and then a silver Ferrari 355. “I was very lucky,” he says.

His Take That bandmates were never into cars to the same degree, he says. Although they expressed an interest in classic cars they weren’t enamoured with sports cars.

The best driver from the group?  “Probably me,” he says, “because I’ve done more track days. And I have a competitive streak in me, like everyone else, but I’m probably the only one who was more into cars.

The band reformed in 2006 and in the subsequent years have released four studio albums. The experience has been totally different, says Donald. “We’ve got kids now, we’ve grown up – well, I’ve grown up a little bit – and we have priorities now, which are our children, really, over our careers.”

Donald has four children, two daughters from previous relationships and two sons, with his wife Katie Halil. Grace, his eldest, is 18 learning to drive. “She has a little Mini but I’ve not been in the car with her yet because I’ve been on tour for the last two months, with six weeks of prep beforehand, so I’ve never had the chance to get together and show her a few things.”

His second daughter, Lola, isn’t named after the legendary race engineering company, he says, “but I’ve always been dying to get a Lola just for that reason.”

As we end our chat, we wish him good luck in his race this weekend, which Driving will be watching from trackside. “If you see me afterwards, don’t open the door. You may not like the smell coming from inside.”

Howard Donald will be driving in the Silverstone Classic (silverstoneclassic.com), July 28-30

Howard Donald: my life in cars

Me and My Motor: Gary Barlow, Take That singer-songwriter, says sensible cars are back for good