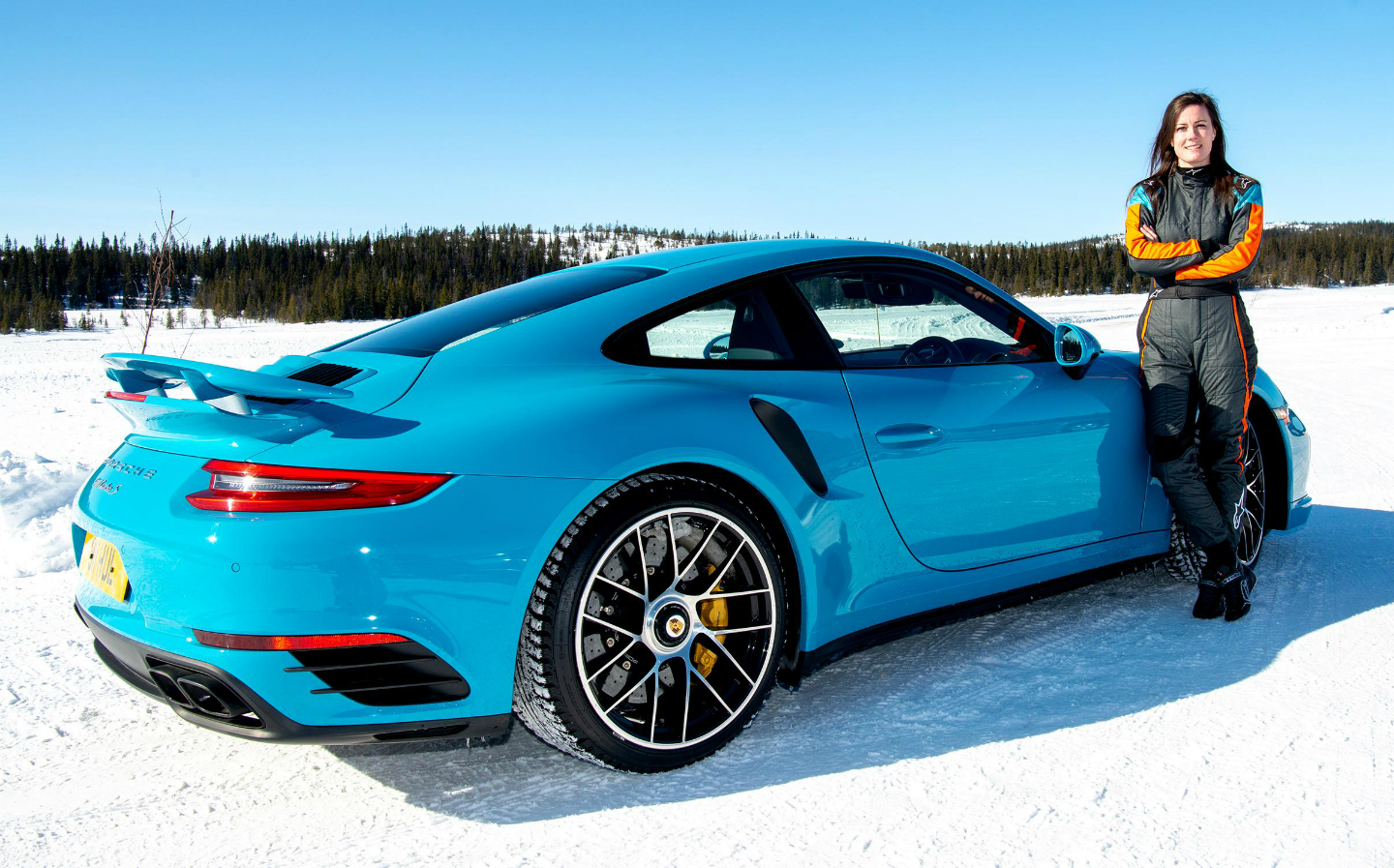 WE CAN’T call Abbie Eaton the first female Stig for legal reasons (although that’s what she is). The 27-year-old racing driver from Hull is the test driver on The Grand Tour, starring the former Top Gear triumvirate of Jeremy Clarkson, Richard Hammond and James May, and will return in the role for the third series on Amazon Prime later this month.

Her identity is not shrouded in secrecy like the Stig’s, but she has the same licence to thrash cars round the show’s test track in Wiltshire. In the new series, she also accompanies “the boys”, as she affectionately calls them, on an ice-driving challenge in Sweden.

Eaton, who has previously raced in the British GT Championship and made her television debut alongside Professor Green, the rapper, in the 2015 ITV series Drive, thought it was a “wind-up” when she first received an email from the makers of The Grand Tour inviting her to try out for the series.

A few days later she was on the show’s test track — “the Eboladrome” — at the former RAF Wroughton near Swindon, where she was asked to match lap times that had been set in about half a dozen cars. “I ended up beating most of them,” she grins.

In their Top Gear days, Clarkson, Hammond and May were renowned for their laddish humour, even though they were the first to talent-spot Sabine Schmitz, the German racing driver who set a lap record on the Nürburgring in a Ford Transit (and went on to co-present the new Top Gear after Clarkson’s departure).

“You get the inevitable online comments about ‘women drivers’, but I’m thick skinned”

So, did Eaton expect to be the butt of jokes from the three presenters? No, she says, and it has “definitely not” been the case.

“I’ve never really come across any sexism, even in my racing.”

Outside her professional life, she gets the “odd throwaway comment”, but says: “I’m quite thick-skinned, so it just spurs me on.

“Jeremy just cracks me up and is like a male version of me. And the boys have been nothing but supportive. I grew up watching Top Gear and I don’t remember ever thinking, ‘This show needs more women.’ There were always women in the audience, but the show was just all about ‘the boys’.”

The car she has most enjoyed driving on the show is a Lamborghini Huracan Performante: “If I win the lottery, it’s the first car I’ll buy.”

The most challenging aspect of the job appears to be circumnavigating the local wildlife. Filming is frequently halted to avoid deer on the track or to remove a stray pheasant from the front grille, or allow the “old lady” who lives in a house alongside the track to leave her drive.

Eaton is the daughter of Paul Eaton, a former racing driver who competed mainly in saloon cars. As a child she was “a massive tomboy”, made her first trackside visit aged two months and, after much pestering, was given a kart for her 10th birthday, switching to cars at just 15.

“I did my first lap in a car in a Citroën Saxo GTR and never looked back.”

She passed her driving test first time, aged 17, and her first car, a Renault Clio, was a gift from her paternal grandmother, who had put money aside every year to pay for a car for Eaton and her brother. Betty Eaton, a Conservative councillor, died a few years ago, but remains an inspiration to Abbie.

“She loved driving and was really independent. She was in the Land Army during the war and taught herself to drive. She was also known to write letters to Margaret Thatcher [when she was prime minister], telling her to pull her socks up. She didn’t hold back on telling people what she thought.”`

After the Clio, Eaton switched to a diesel Ford Focus, followed by a Mini Cooper and a Volkswagen Golf GTD (until someone drove into the back of it) as she continued to compete in series such as the Production Touring Car Championship, driving a Vauxhall Corsa SRi-R, and winning the class B championship outright, while finishing second overall. Later, she moved to the Mazda MX-5 Supercup and won the championship in 2014.

She made her move to the British GT Championship in 2016, driving a Maserati GranTurismo MC GT4 and ending the season fourth overall, with teammate Marcus Hoggarth.

On the road she was driving a sensible BMW 120d M Sport, the second of three. “My little workhorse,” she says. “It costs me nothing to run and it’s got heated seats. I drive so many miles I can’t really justify getting anything that uses a lot of fuel. I hate it when you can see the needle going down.”

When we speak, she is in Australia, trying out with a couple of teams, in the hope of competing in the Super2 Series next season. It is the second-tier series to the Australian Supercars Championship, in which drivers compete in cars based on road-going saloons.

“It’s basically racing the last season’s cars, which are just a second slower,” Eaton explains. “The cars are really raw, with no traction control or ABS. It’s proper racing, not technology-driven rubbish.”

Eaton thinks The Grand Tour team has “picked just the right moment” for a female Stig, er, sorry, test driver, and says feedback has been overwhelmingly positive. She was not naive enough to think comments on social media would be entirely favourable, however.

“You get the inevitable ones about ‘women drivers’,” she says. “And then there are the people who say, ‘The Stig would be faster.’ But I say, ‘If the Stig wants to come and have a go, he’s more than welcome.’”

Series three of The Grand Tour is available on Amazon Prime from midnight tonight.