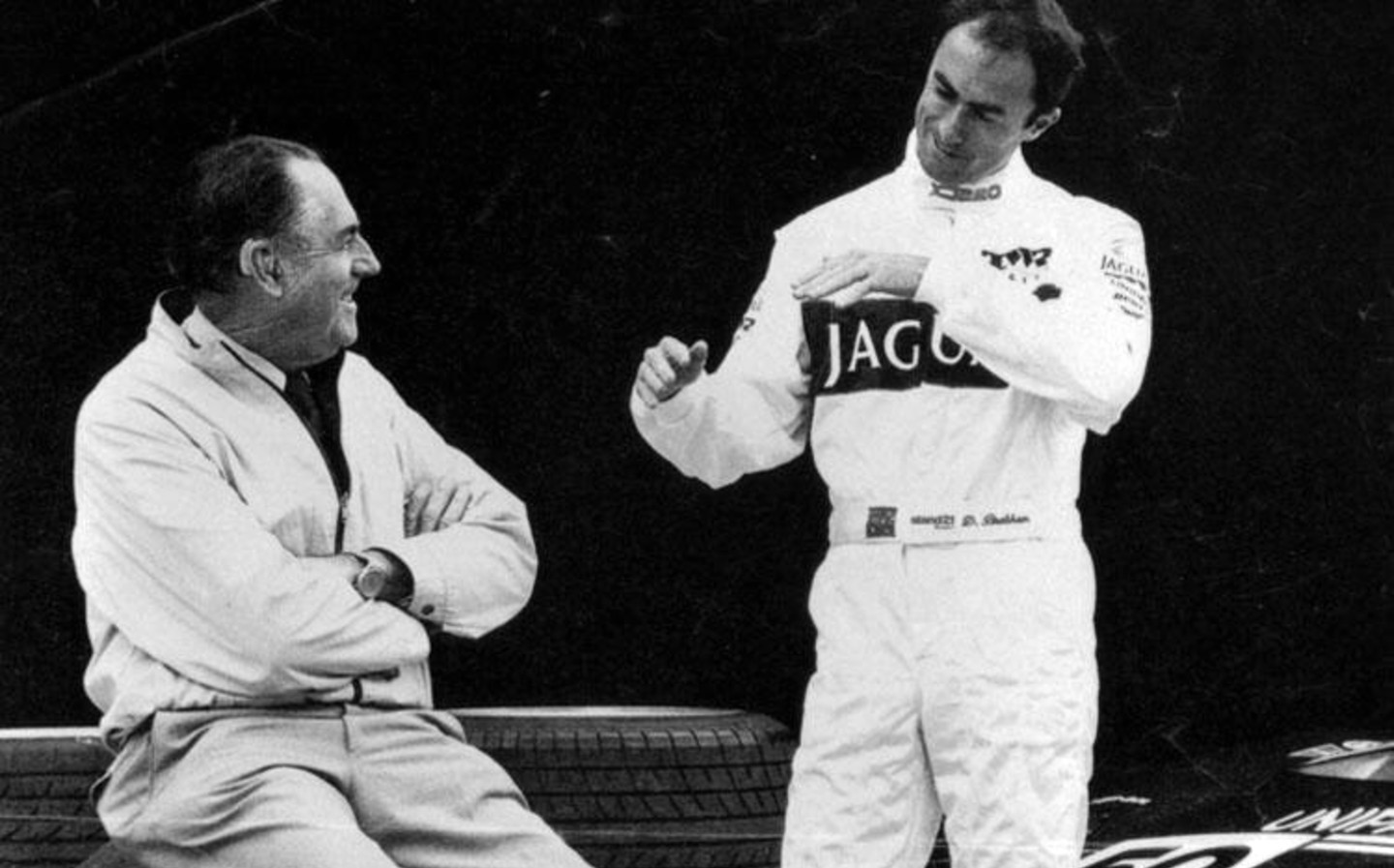 ONE WOULD think a Le Mans-winning racing driver, whose father won the Formula One world championship three times and founded his own team, would have had all the breaks in his early track career. But David Brabham, son of Sir Jack Brabham, has revealed just how close he came to becoming a farmer in rural Australia after his famous dad “did everything possible” to keep him away from circuit competition.

Speaking on The Chubb Interviews podcast, published this morning, Brabham said: “With my father’s history, it’s very easy to think, ‘Oh, dad stuck me in a go-kart at the age of four and off I went.’ That couldn’t be further from the truth. He did everything possible to actually keep me away from motor sport, to be frank. You don’t send your kid to an agricultural boarding school in the middle of Australia if you want him to go motor racing.”

While driving quickly around the farm became a passion, Brabham said he was “groomed to be a farmer” in the early days, and never considered motor sport as a career, despite being part of a racing dynasty. As well as being the youngest son of a three-time F1 champion, David’s older brothers had also gone into racing: Geoff Brabham was a successful driver in the United States and also won the Le Mans 24 Hours, in 1993, while Gary Brabham won the British Formula 3000 Championship in 1989 before going on to success in endurance racing, too.

David, meanwhile, left school at 16 and went to a college “to learn about wool”. 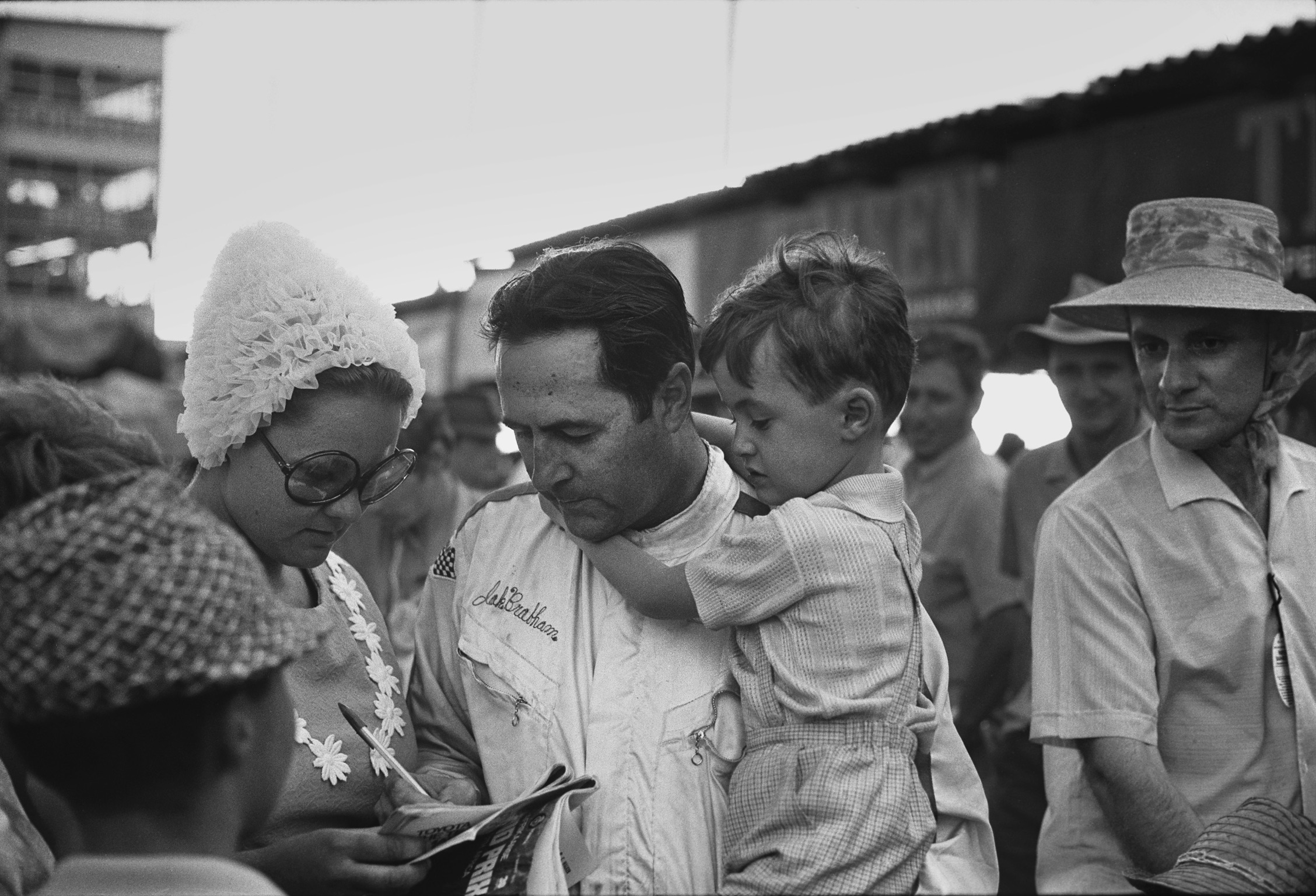 Jack Brabham with David in his arms, 1970 South African Grand Prix [LAT]
However, a three-month trip to America, during which time he visited Geoffrey, who was racing in the CART PPG Indy Car World Series at the time, changed his trajectory.

“I started to fall in love with motor sport then. There were go-karts sitting in a workshop. There was a mechanic working on it, and I still remember this very clearly because I asked the most stupid question: ‘Do people race go-karts?’ I had no idea.”

Overhearing this exchange, Geoff, who was being fitted for a race seat at the time, asked: “Are you adopted?”

On returning to Australia, David told his father that he’d also like to have a go in a kart. “His jaw just dropped because he never thought those words would come out of my mouth,” Brabham explained.

RIP Sir Jack, 94 today. When your 3 times F1 World Champ father leans over the kart and gives advise you listen. He said “David, if you want to go faster… use less brake and more throttle”. He gently smiled and walked off. Miss you. #F1 #RIPBlackJack pic.twitter.com/l2coei4GxJ

Sir Jack “wasn’t that helpful” to begin with, according to Brabham, who convinced his next-door neighbour to build a kart for practise. The pair then visited a kart race and jointly bought a second-hand kart.

“That’s where it all started. So the inspiration, actually, came more from my brother Geoffrey than it did from my dad,” said Brabham. 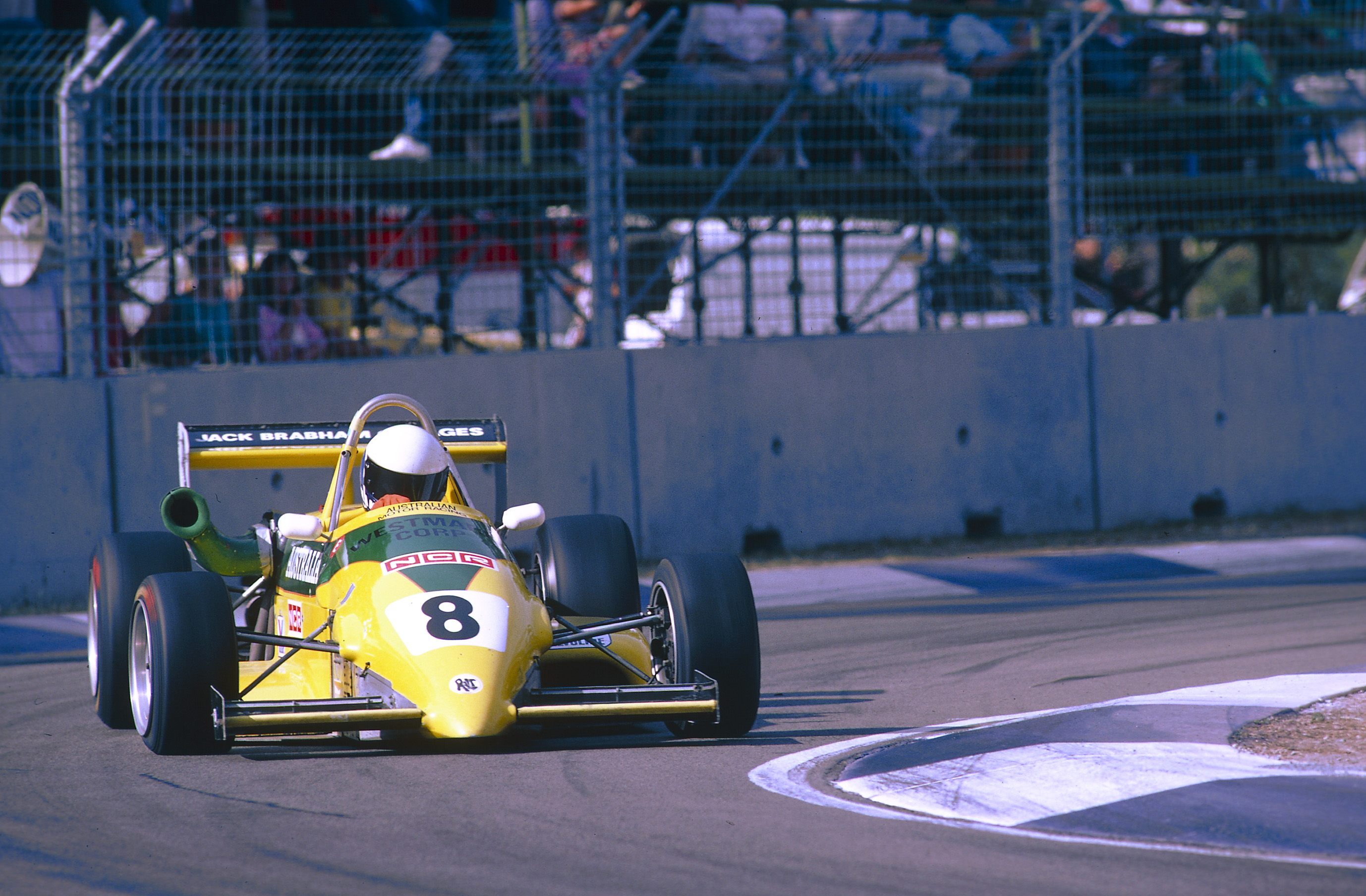 The young Australian found that he “did quite well quite quickly,” which encouraged his father to take his racing more seriously, though he still balanced races with work on the farm in the early days. Brabham then progressed through Ford Lasers before competing in America, Argentina and New Zealand, as well as his home country, winning the Australian Drivers’ Championship Gold Star in 1987.

That win, “in front of the Formula One crowd”, came on the back of an argument with Sir Jack, according to Brabham.

“Dad didn’t say a lot, but when he did it went right through you. When I told him my girlfriend was pregnant he said, ‘The days of you ever getting to Formula One are finished.’”

“He was old-school – dad didn’t say a lot, but when he did it went right through you. We had a good relationship [but] we had times when we didn’t get on. I remember what inspired me, I think, to win the Australian Gold Star event: I had a massive argument three months before with my parents because I had to tell them my girlfriend was pregnant. That went down like a lead balloon for my dad.

“He could see how well I was doing and he told people, ‘David is the best that we’ve got. He’s definitely going to get to Formula One.’ So when I told him, ‘Oh, by the way, my girlfriend is pregnant,’ that didn’t go down very well.”

Brabham described how he had a terrible qualifying for the Gold Cup race and was last on the grid for the race. “I’m standing there with mum and dad, and dad is wearing a Formula One pass. We’ve hardly spoken and I tried to bridge the gap, and I said, ‘You better get me one of those F1 passes for when I’m in Formula One.’ He just said, ‘The days of you ever getting to Formula One are finished.’

“I won’t say what I told him because that was … I swore quite a lot at him.”

In “an absolute rage”, Brabham drove from 35th to first over 14 laps to win the race.

“It just took me to a completely different level I’d never knew existed inside me. When I look at it, it was an absolute gift.”

Sponsorship from Camel Cigarettes gave Brabham the opportunity to race in Europe, in the Vauxhall Lotus Championship, which he “absolutely hated” because the cars were “two steps down compared to what I was used to”. It was demotivating enough to allow thoughts of hanging up his racing boots to enter his head.

However, subsequent success in Formula Three encouraged Brabham to continue, and he went on to win the F3 World Cup race at Macau beating Michael Schumacher, Mika Häkkinen, Eddie Irvine and Alex Zanardi – all legends-to-be of Formula One.

Brabham got his own shot at F1 as a result, though with struggling teams – one bearing the Brabham name, in 1990, and then Simtek in 1994. That was the tragic year in which saw the death of both Roland Ratzenberger – Brabham’s team-mate – and Ayrton Senna, at the San Marino Grand Prix. Since then the racing has mercifully become a lot less dangerous, but that has taken away something from the spectacle, said Brabham. 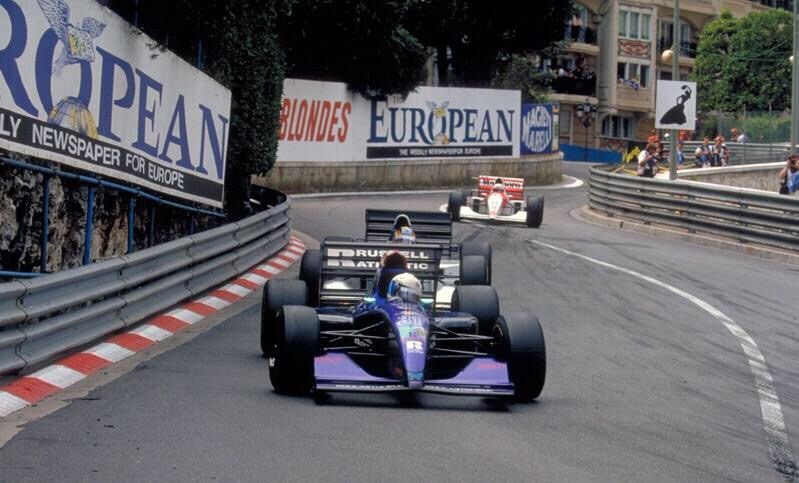 Brabham racing for Simtek at the 1994 Monaco Grand Prix
“For me, when I look back in the early ’90s, there was still this sense of danger. The drivers had to respect the track a lot more because any mistake and you were off and it was going to hurt.

“Obviously, I went through the ’94 Imola event with Roland Ratzenberger, who passed away that weekend with Senna. Today, when I look at it, and being involved in young drivers and watching out there on track and seeing their attitudes, it’s very different. The run-off area is a lot more now, there’s less respect.

“I think the danger element, if we take too much of that away from racing, it’s no longer racing in my mind. So it’s a very fine balance.”

However, Brabham still appreciates the exceptional driving performances in modern F1, he says. “Max Verstappen at Brazil in the wet; he and Lewis were on a different planet to anyone else and it was just super impressive to watch. When you see people kind of dig that bit deeper and you see them in a different place to everybody else, that’s what I always like to watch. If I see a race where it’s all kind of one following another and there’s not a lot happening, I switch off pretty quickly.”

Brabham had greater success in sports cars, finishing second in a Bentley 1-2 at the 2003 Le Mans 24 Hours, then winning the GT1 class with Aston Martin and 2007 and 2008 before outright victory with Peugeot in 2009.

“I think the danger element, if we take too much of that away from racing, it’s no longer racing in my mind”

He recalled: “I always remember standing there on the GT1 podium [in 2007], and you see the British fans and all the fans out there with all the flags, and it’s such an amazing experience. You’ve just won your class. Then you get off and the winners overall come on, and you think, ‘Oh, my God, what does that feel like?’

“Then in 2009, I’m on that top spot again [having won outright]. I realised the feeling is exactly the same. It’s no different. So it’s not necessarily about the trophy. It’s about the journey with all the teams, the team-mates, your family, all those people that have contributed to you standing on that podium. To me, it was more about that than picking up a trophy and saying I’d won Le Mans.” 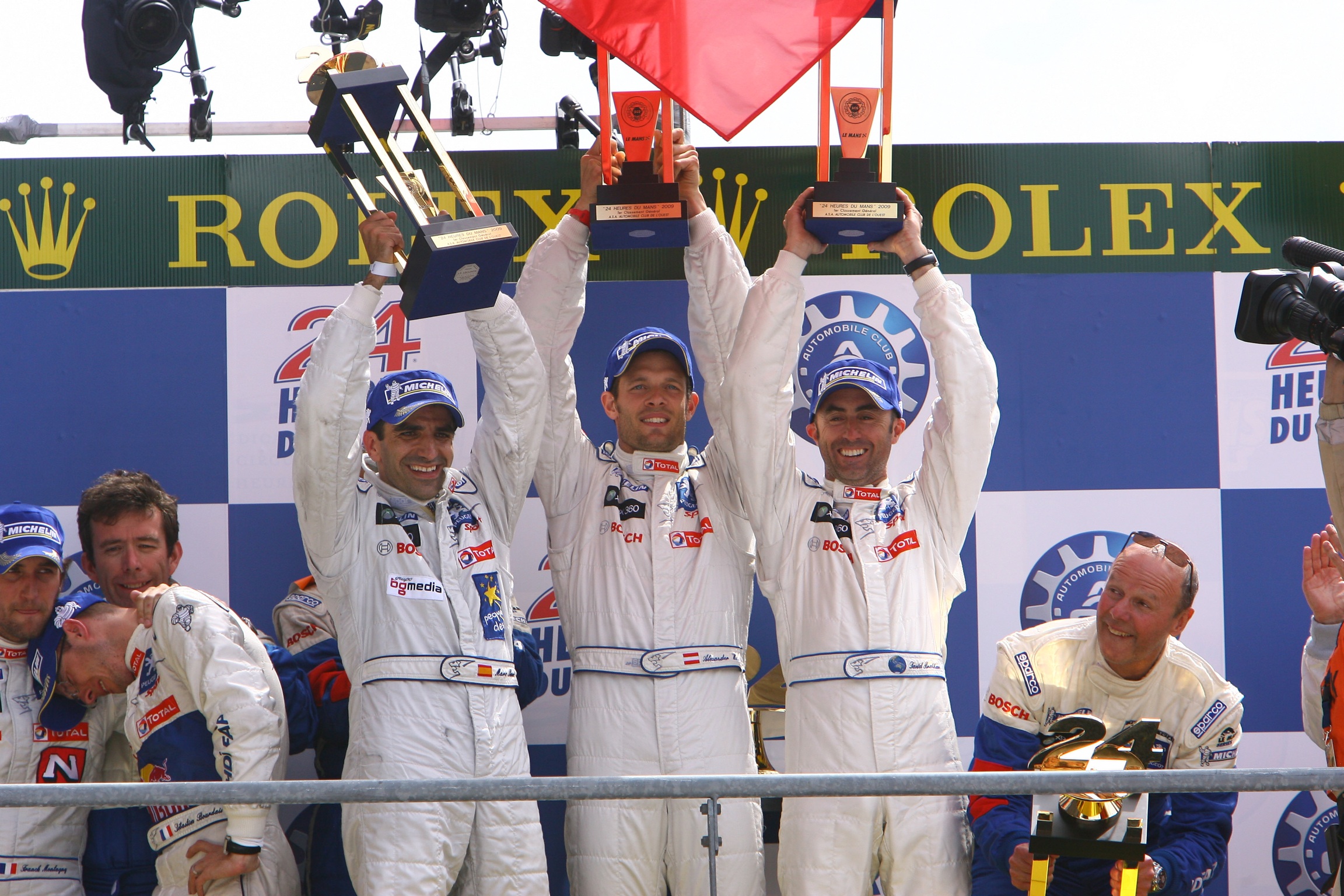 Brabham on the podium after winning the 2009 Le Mans 24 Hours with Peugeot [Jean Michel Le Meur / DPPI]
Brabham’s last full year as a professional racing driver was 2012, and in 2018 he founded Brabham Automotive, producing a new lightweight hypercar.

David discovered that someone had already registered the Brabham name in Europe, and embarked on what became a seven-year legal battle in Germany to bring it back under the family control. He then joined forces with a private equity group to form Brabham Automotive, producing the fearsome BT62. 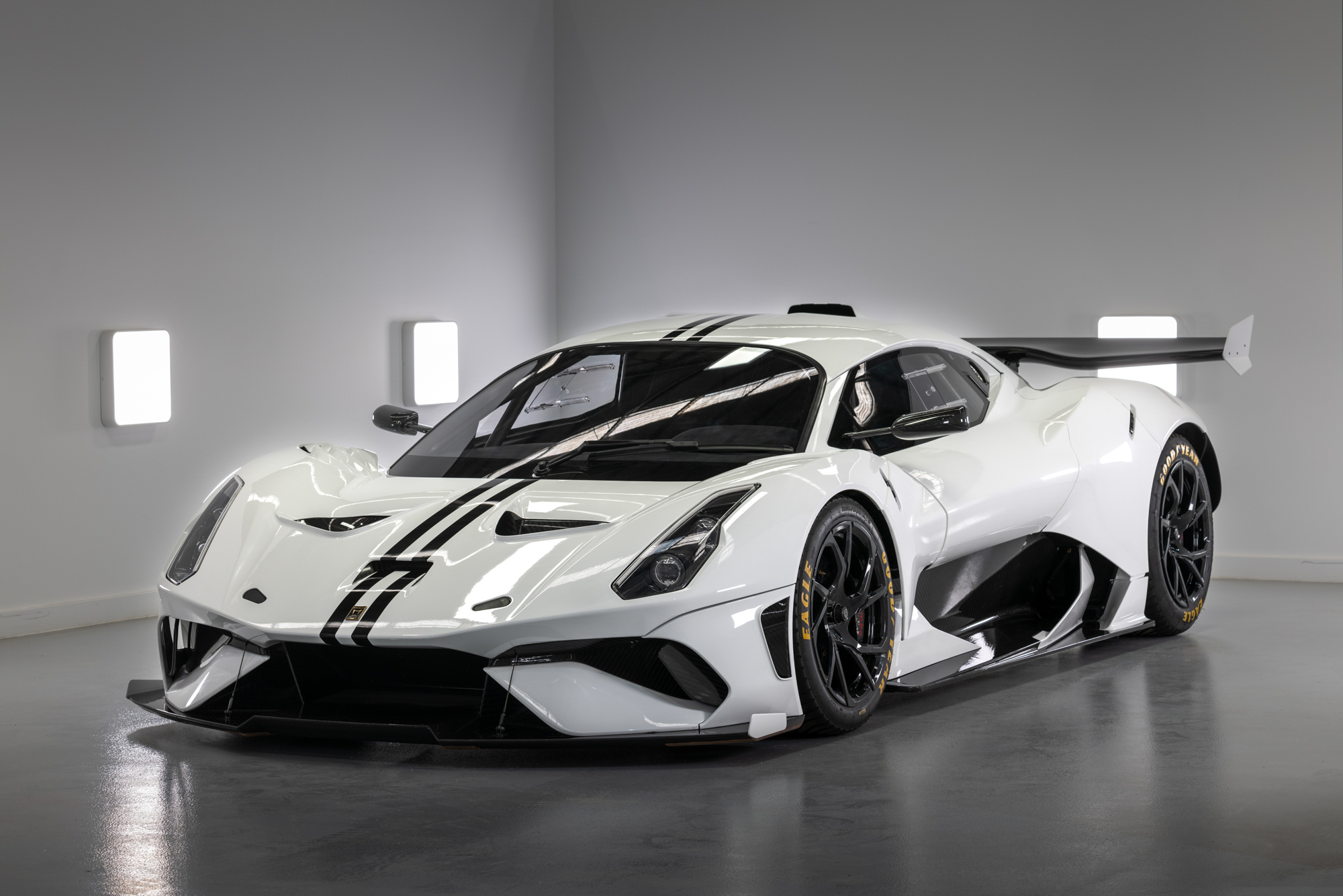 “It was a high-performance track car, which now has evolved into different variants; with a Competition Spec Brabham BT62, and the road variant version, the BT62R, which customers will get at the end of the year. More about that detail will come out in the coming weeks.”

Brabham also revealed that he’s working on a follow-up to the BT62 — a “fully-homologated road supercar” — which Brabham Automotive plans to launch next year.

“Obviously, we want to be racing at Le Mans in the future, so we’ve been working on what that looks like, hopefully, in 2021, 2022. The racing will still live on through the project as well.”

For more on David Brabham’s career and his relationship with his father, listen to The Chubb Interviews podcast below and find other episodes at www.chubb.com/theinterviews.

All images used in this article were provided by David Brabham/ Chubb.

Me and My Motor: David Brabham