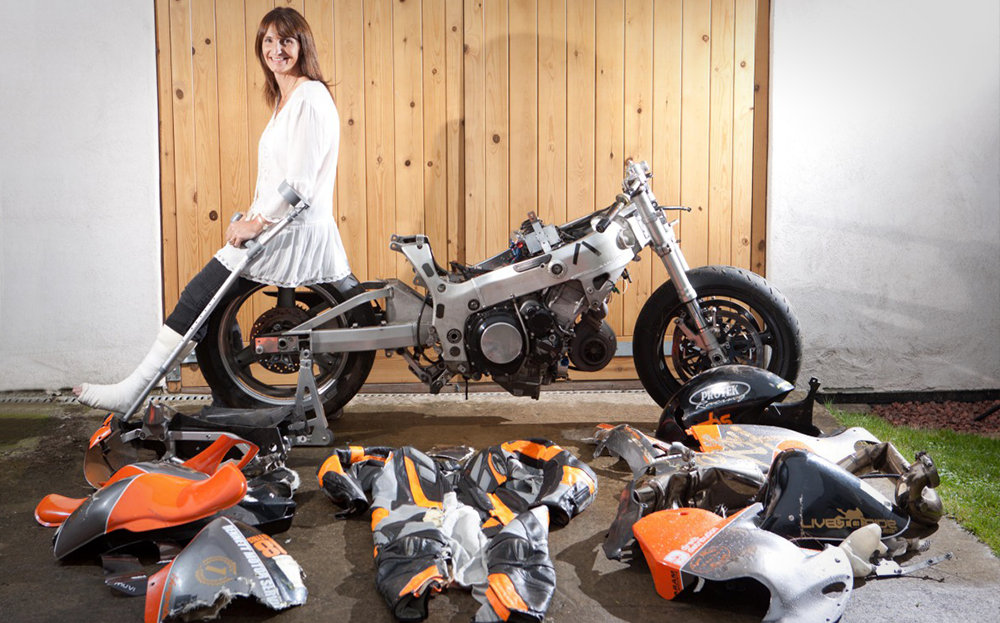 When Becci Ellis became the fastest woman on a motorcycle, she knew she could go quicker still. But this month, as she pushed her 650bhp Suzuki to the limit, it shot off the track in front of her husband and horrified fans. She describes what happened next…

MOST people who crash a motorcycle don’t like talking about it or showing off their injuries. I must be a bit of an exhibitionist, because I don’t mind a bit. That’s because I’m lucky to be able to talk at all. Or walk. I’m grateful to be alive. I was doing 254mph when wind resistance ripped my foot off one of the pegs where it was resting and I veered out of control. Usually at that speed you’d be a write-off, along with your machine.

Click to view the NEW and USED cars for sale on driving.co.uk

Before I tell you more about the crash, I should explain how it came about. Last August I became the fastest woman on two wheels when I set the female world record for a standing mile on a conventional motorbike, at 264.1mph. Since then I’ve been working on going even faster because, as it stands, I’m fourth fastest in the world overall, behind three men.

I’m only 4mph behind the second and third-placed men, and I really want to go faster than them. It might take a bit longer to get to the world record of 296mph. That was set in 2013 by Bill Warner, an American who died the next day as he tried to go faster.

Land speed record attempts are a serious business and everybody involved with them knows it. We know what can happen. But you never think it’s going to happen to you. Especially as, until two weeks ago, I’d never had a bike accident.

“At 250mph, the bike is still pulling like a train. The standing mile is usually over in little more than 20 seconds. . . That’s where things started to go wrong”

I was close to reaching a record-breaking speed when I lost control. One minute I was on the runway at Elvington airfield near York. The next I was riding across a ploughed field at more than 200mph like some piece of demented agricultural machinery. I was hurled over the handlebars and skidded along the ground. In those circumstances you can only hope for the best. And the best you can hope for is an air ambulance. Anything else doesn’t bear thinking about.

If there is any such thing as a typical land speed record holder, then it’s not me, an IT analyst and mother of two, aged 48, from Scunthorpe. This month I found out I’m soon to be a grandmother.

I’ve always been into bikes: as a little girl I used to ride on the back of my brother’s motorbike at every opportunity and we used to go off to the seaside. I became a bike instructor and met my husband, Mick, 60, who used to hold a world record himself on a three-wheeled machine. 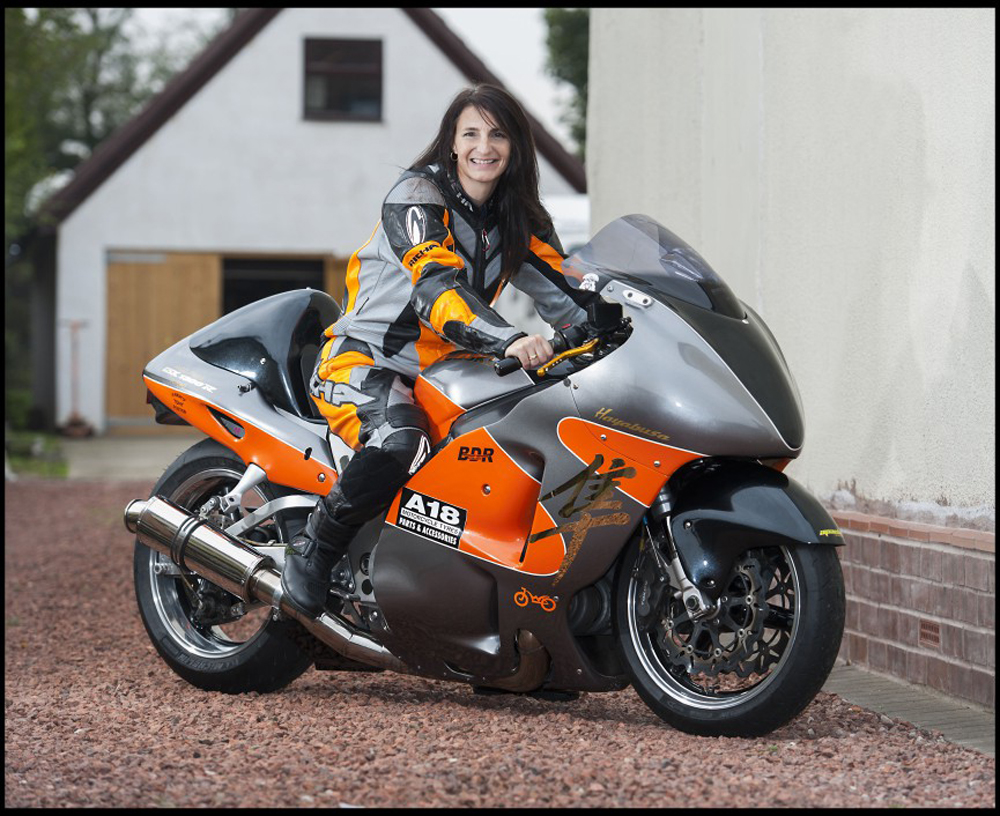 I only got into record-breaking by accident, when we bought a standard high-speed Suzuki Hayabusa in 2008. I took it for a run at RAF Woodbridge in Suffolk and did 184mph. When I got back, I was absolutely squeaking. It was phenomenal and I was smitten.

From that point, we started tuning the Hayabusa. We replaced the pistons and conrods and sent the gearbox to America for strengthening. Mick fitted a turbocharger with a unique boost system that he had designed himself. The standard bike had about 160bhp and a top speed of less than 200mph. Now it’s got between 650bhp and 700bhp and we think the top speed is 270mph, or even 275mph.

Last year we ran the bike properly at speed events and broke the world record six times, ending at 264.1mph, which was an awesome experience and a real team effort. I might get the limelight, but without Mick and a small group of friends working free from our garage, I wouldn’t be going anywhere fast.

This year we were looking for more, and on Saturday August 15 we were ready to go for it. I had been gradually building up the top speed, looking at the data and fine-tuning the engine settings. I had just done a 259.5mph run, so I was ready to push the bike, to turn up the boost and power and go for the record.

At about 4.20pm I started off from the western end of the runway. Setting off is pretty standard — I move off as I would from a set of traffic lights but build up speed very quickly. The gearing is quite high, so by the time I changed from first to second gear, I was doing 100mph.

That’s when the boost kicks in. The acceleration is like someone hitting you around the head with a spade, even though I’m not at full throttle until I change into third. Nowadays, 200mph just feels like a steady run. Even 240mph is pretty normal. It’s the last 20-30mph when the scenery really blurs and you know you’re going seriously fast. At 250mph, the bike is still pulling like a train, more power’s coming in and it’s exhilarating: a real adrenaline rush. The standing mile is usually over in little more than 20 seconds and the crucial bit — the last 80ft where your average speed is measured, called the speed trap — goes by in a flash. That’s where things started to go wrong. 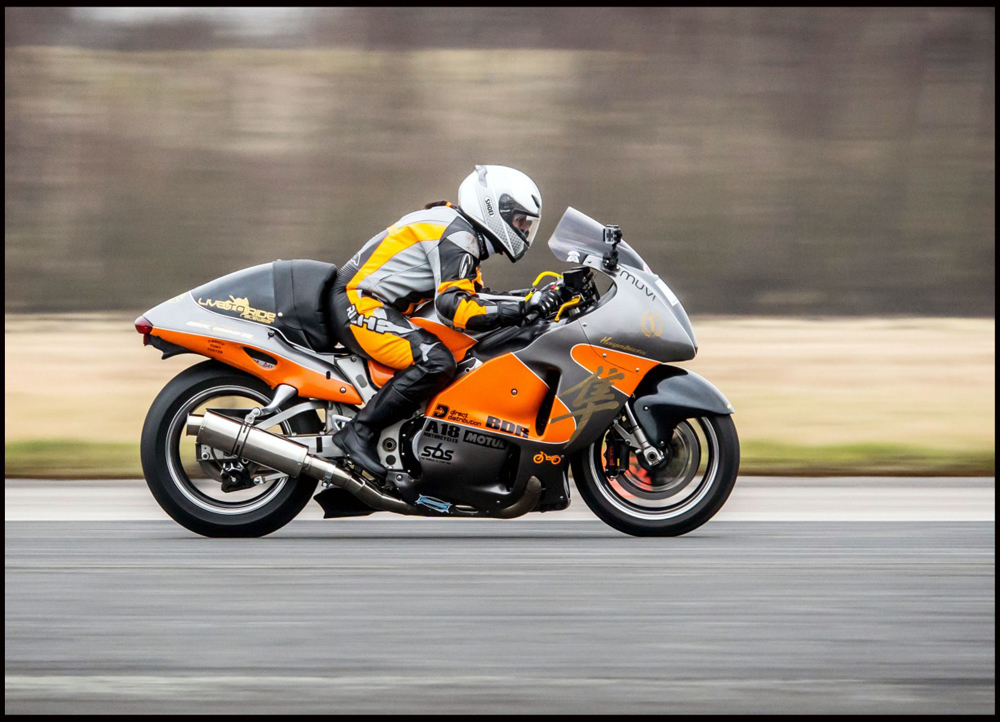 At land speed record pace, the wind resistance is phenomenal. Just as I approached the speed trap, a gust of air caught my foot and whipped it off the footrest. I backed off on the throttle because the bike had become slightly destabilised, and at those speeds you have to be in full control.

I began trying to get my foot back on to the rest, battling against the airflow, and I must have just eased my body slightly to the right. That moved my shoulder out from behind the fairing and into the wind and suddenly I was blown upright. It was sheer adrenaline and experience that stopped me being blown right off the back, but I couldn’t stop the bike veering off the runway and into a field.

At that point your head goes into safety mode. I knew I needed to keep the bike in a straight line and upright for as long as possible. If I’d touched the brakes, it would have pitched me off at high speed, so I clung on for about 300 yards until the bike crashed into what looked like a large molehill and I was catapulted straight over the top onto my front, still at 70-90mph.

“I saw Mick when the paramedics turned me over and he looked really worried. All I wanted to know was how fast I’d gone”

I don’t recall that part of the incident — it happened in a fraction of a second — but I found myself sliding along the ground, the grass against my helmet. I realised that, crikey, I was going at some rate. I was also thinking, “Where’s the bloody bike?” because I didn’t want it to land on me. I don’t think I could have survived that.

Fortunately I was wearing leathers with Kevlar-plated body armour. Putting them on feels like wearing an extra skeleton, and they were extremely well made. I stopped after about 100 yards and wriggled a bit. I was winded but could feel everything moving, so I knew I was OK. They tell you to keep still after a big crash until you’re checked over. 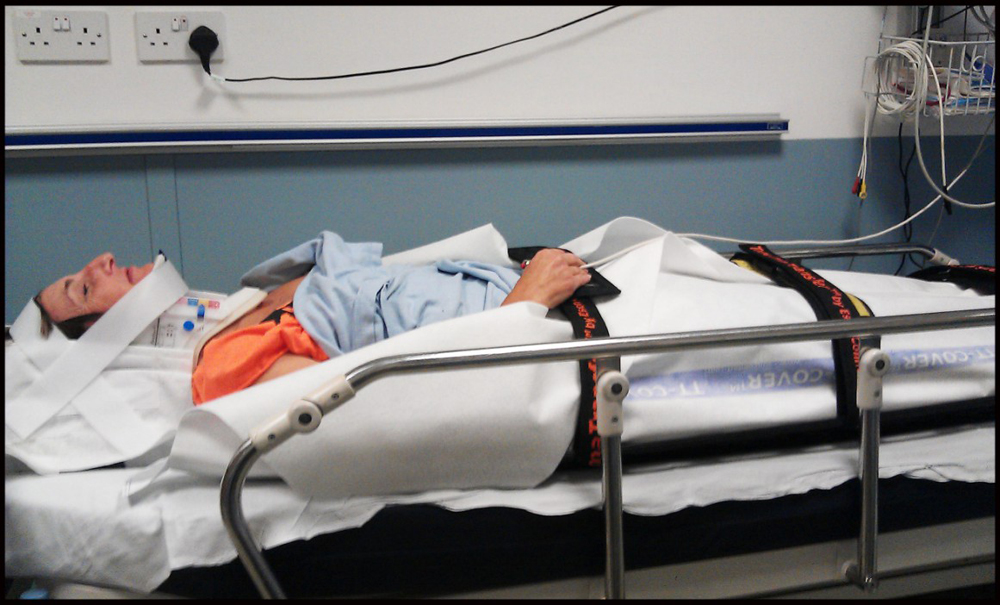 I saw Mick when the paramedics turned me over and he looked really worried. All I wanted to know was how fast I’d gone — it could have been a world record for all I knew. Then I asked how the bike was. “You don’t want to know,” he said.

The paramedics were fantastic. I was flown out in an air ambulance because of the speed of the crash, but was discharged from hospital at 1.30 in the morning. By 11am I was back at the track to show everybody I was OK and to support everyone competing.

There was also the important matter of collecting my winner’s medal: the 259.5mph run was the fastest of the weekend, so I collected it on my crutches and the applause was incredible.

I had some internal bleeding around my ribs, whiplash from being thrown back in my seat and a broken ankle, but I know I got away lightly.

The crash hasn’t scared me at all. I’ll be back on my road bike when my ankle’s mended, and we’re already making plans to rebuild the record-breaking bike. We’ve learnt a lot in the past two years, and it’s a great opportunity to redesign everything to increase the speed.

We’ve got fantastic sponsors in Direct Distribution Services and A18 tyres. We are hoping another sponsor might help us to get some time in a wind tunnel for the new bike so we can redesign the aerodynamics and ensure the problem doesn’t recur. 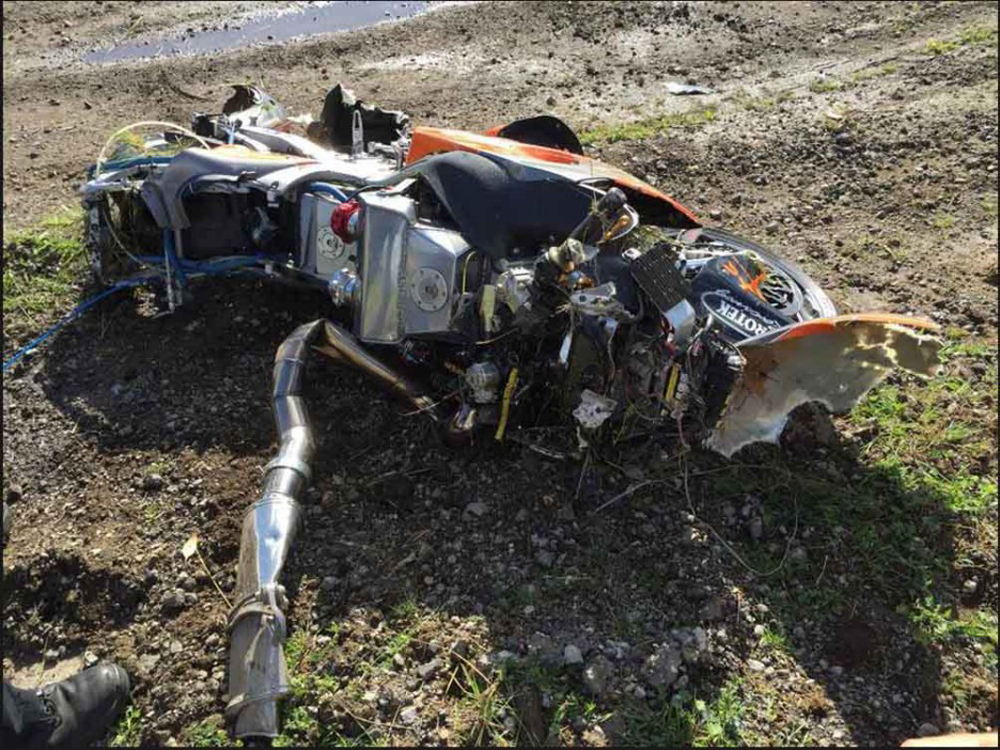 We also managed to recover the bike’s expensive engine management box from the field, thanks to volunteers including the York and District Metal Detecting Club, which scoured the area around the wreckage for hours and finally found it. I can’t believe the support we’ve received from friends and members of the public offering their time and parts.

Click to view the NEW and USED cars for sale on driving.co.uk