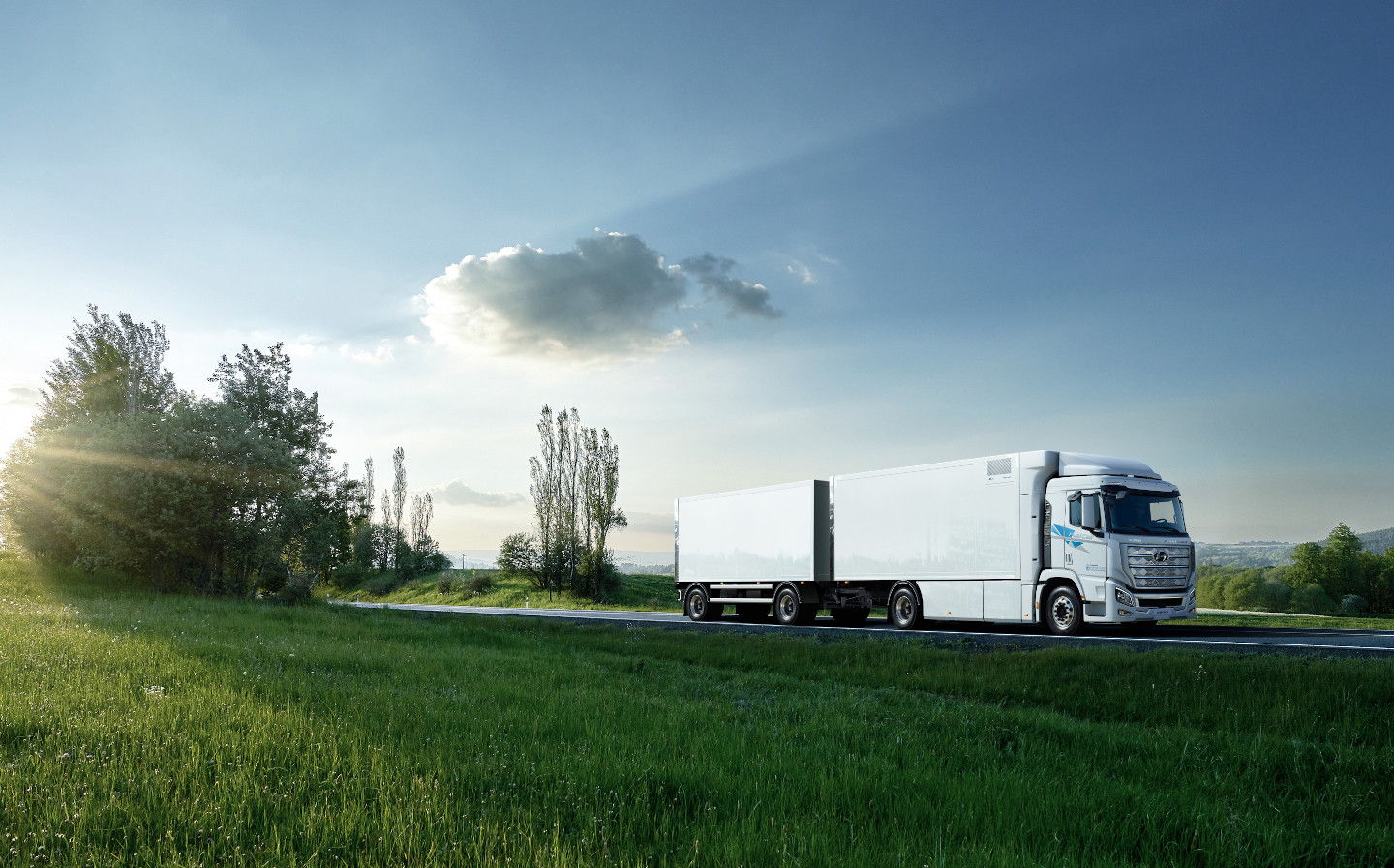 The company has shipped the first 4X2 models to Switzerland, where it hopes to have 50 of the lorries on the roads by the end of the year. It is aiming to have 1,600 units across the globe by 2025.

The lorries are powered by a 190kW fuel cell system, which combines hydrogen gas stored in a tank with oxygen from the air to create electrical energy. The only by-product is H2O (water). A tank of hydrogen can take the Hyundai truck 248 miles, Hyundai says.

Despite passenger vehicles having gone down the plug-in electric route (there were just 10 hydrogen-powered vehicles registered in the UK in 2016), hydrogen fuel cells are still a viable alternative technology to internal combustion engines. They are not more widespread because hydrogen refuelling stations are so few (there are only around 12 in the whole of the UK) and the cars are much more costly than petrol, diesel, hybrid or pure-electric equivalents.

However, hydrogen fuel cells make particular sense for commercial vehicles for two reasons. The tanks can be topped up quickly, meaning it can be off the road for shorter periods during long haul transportation — a car or small van can be completely refilled in around five minutes, compared with around 30 minutes to rapid charge a pure-electric car to 80% capacity, while the Hyundai lorry’s tank, which is larger than those found in cars, takes between eight and 20 minutes to replenish. In addition, hydrogen gas tanks are much lighter than lithium-ion battery packs, which means more weight can be loaded in the trailer.

Critics of fuel cell vehicles (FCVs, or FCEVs), however, point out that compressing and storing hydrogen requires electrical energy — usually from the mains grid, which may as well be stored directly in battery packs with minimal energy loss. Depending on the grid’s power source mix, it could also be using fossil fuels to create and store the hydrogen. Hyundai has said that in order to keep the emissions from the lorries as low as possible, only green hydrogen generated using hydropower will be used.

This is why the company has chosen Switzerland as the testing ground for the fuel cell truck — the country has one of the highest shares of hydropower in the world, which means that it can meet demand for green hydrogen. Swiss rules also mean that there is no road tax on zero-emission commercial vehicles, which brings the hauling costs for fuel cell lorries down to nearly the same as their diesel counterparts.

A partnership set up last year with Swiss energy company H2 also means that lorries can be leased on a pay-per-use basis, meaning that there is no large initial investment for commercial users.

To get around the lack of refuelling locations, Hyundai is planning to set up a filling network throughout the country so that range anxiety isn’t an issue. Once the project in Switzerland is up and running, Hyundai plans to expand to other European countries.

The 4X2 lorry marks a step in Hyundai’s commitment to make hydrogen a bigger player in the motoring landscape. The South Korean car maker aims to sell 110,000 fuel cell electric vehicles (FCEVs) annually by 2025 and have the capacity to manufacture 700,000 fuel cells a year by 2030, to be used in lorries as well as boats, trains, drones and power generators.

The release comes weeks after competitor Toyota intensified its own efforts to make hydrogen commercial vehicles a viability by partnering with five Chinese companies to create and manufacture fuel cells. China is aiming to have a million FCEVs on its roads in the next decade. Whether or not that will be possible remains to be seen, with only 5,000 FCEVs currently on Chinese roads.

Toyota also announced that manufacturing of the hydrogen-powered Mirai saloon will be intensified tenfold when the second generation of the car enters production later on in the year.

Hyundai says it is working on creating a long-distance tractor unit that can go 620 miles on a single tank — almost double that of the longest-range battery electric cars currently available.

Handovers of Hyundai’s hydrogen lorries to customers will begin this September.

Hyundai: Plug-in electric cars are ‘quick fix’ but hydrogen must be part of future