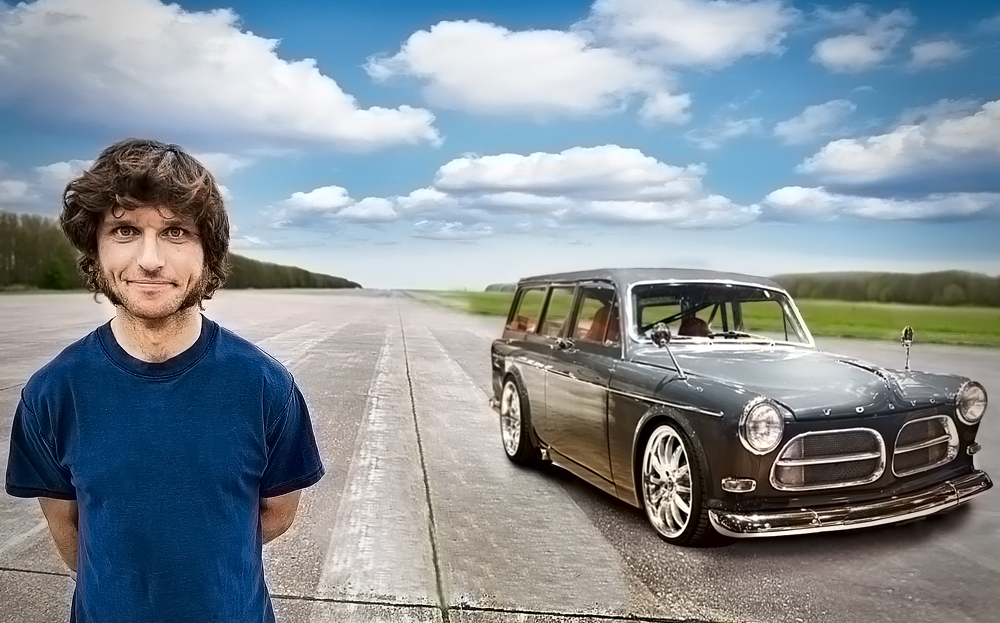 PEOPLE ARE surprised when I tell them that I have only two cars. They expect me to have a garage filled with supercars. They are even more surprised when I tell them that one is a 13-reg Ford Transit van, which I use almost every day, and the other is a Volvo estate, which I use only on special occasions. This is fine by me — I don’t see the point of boasting about my cars.

Don’t get me wrong: I’ve had my fair share of supercars. But none of them has been a patch on the Volvo Vöx . It is a 1967 estate, in beautiful battleship grey, and every time I get in it, it just twists my mind — and it would do the same to you too. Although it looks like a standard Volvo, I reckon it is about the fastest car in Britain — quicker than any Ferrari, Porsche or even Bugatti. That’s not me boasting — I don’t want to come across as big-headed. It is just a fact.

The truth is, this is the quickest machine I have ever driven or ridden. My GSXR Suzuki superbike is about 220bhp and probably a bit quicker to 100mph, but if you put them on the road together the Volvo would leave it for dust between 100mph and 200mph.

I can still remember the first time I saw it. I was competing in a TT race two years ago, and one of the other riders called me over to show me something on his phone. It was a picture of a grey 1967 Volvo Amazon. Even at the time it looked beautiful; then he explained what had been done to it and I was hooked. I had to buy it. 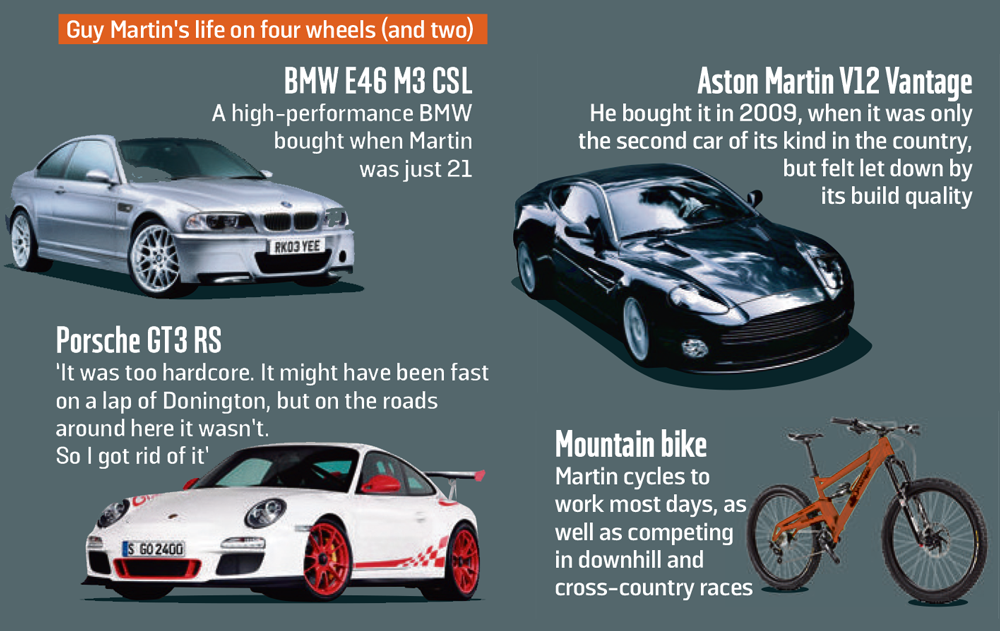 It probably helped that at the time I was driving an Aston Martin Vantage V12, which I was fed up with. When I was 21 I owned a BMW E46 M3 CSL and then a Porsche GT3 RS but I always wanted an Aston. It is the sort of car you grow up dreaming of owning. But I had nothing but bother with it. The windows seemed to jam, the seats seemed to seize up and I couldn’t get the claimed top speed out of it on a track — not big things, but I was disappointed. But the worst thing about it was the lights.

Whenever I saw an Aston on the road, the thing I always noticed was the sidelights glowing in the gloom, giving the car that classic Aston look. I always loved that. But when I bought the Vantage I discovered that those lights didn’t come on automatically: the driver had to switch them on.

I find it funny that people feel if they spend a fortune on a car they are somehow more important than their peers who don’t. Someone once told me: “I’ve got a 458 Ferrari. Vinyl stripes on the bonnet are £7,000 extra, but you have to have them, don’t you?”

It may sound a small thing, but to me it was massive. What? You have to put the lights on manually? That seemed a bit close to posing — ostentatious. I can’t really explain why it put me off, but it did. It was as though the whole Aston look was a fake.

I sort of feel the same about supercars in general now. When I see someone in a Ferrari, I think: “They have bought a Ferrari because they don’t know anything about cars.”

I find it funny that people feel if they spend a fortune on a car they are somehow more important than their peers who don’t. Someone once told me: “I’ve got a 458 Ferrari. Vinyl stripes on the bonnet are £7,000 extra, but you have to have them, don’t you?” I thought to myself: “I’ve got a mate in Ireland who does vinyl strips for my Tranny for around £50.” 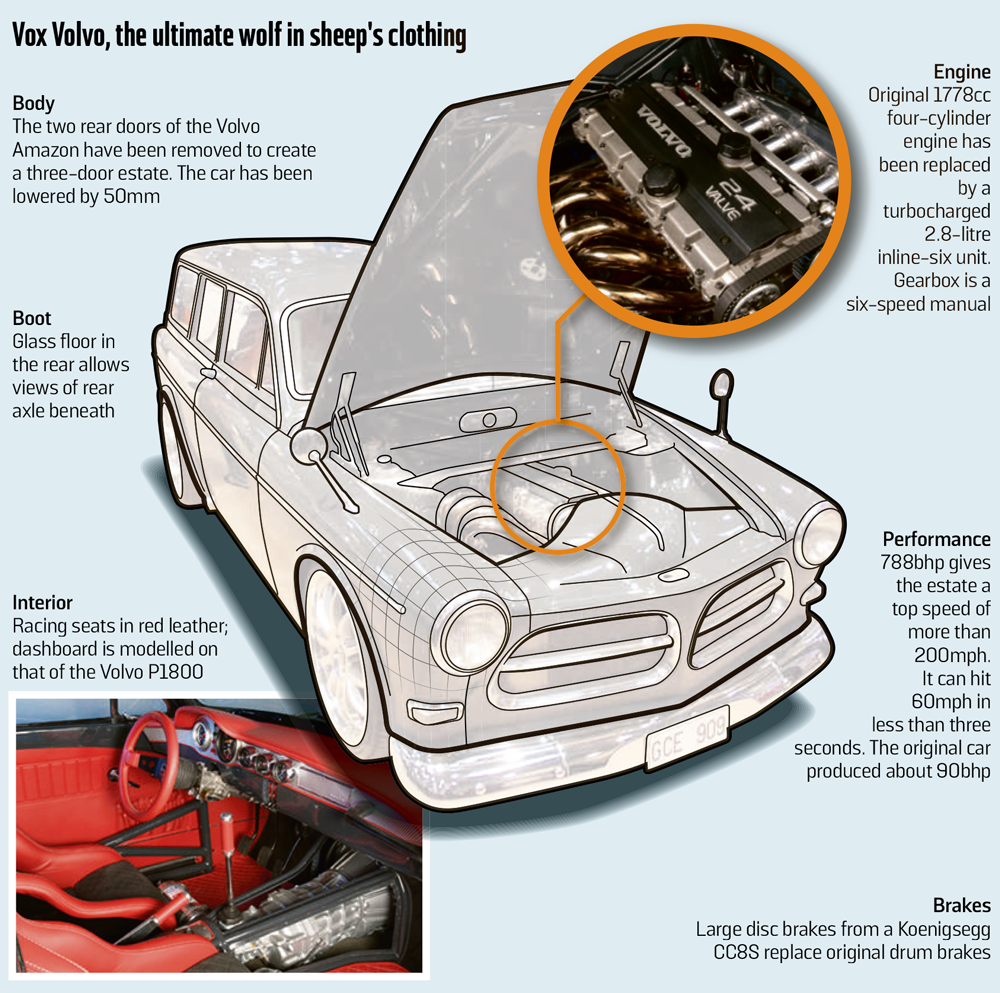 That is why the Volvo appealed. It was like the anti-supercar. It had been built by a guy called Mattias Vöcks, an engineer from Sweden who works for the supercar maker Koenigsegg. I did the deal in two phone calls, finished the TT race, got in my van and drove to Sweden.

Vöcks speaks better English than I do, and made it clear that he didn’t want me to drive it, so I sat in the passenger seat while he took the wheel. As soon as he floored the throttle, it blew me away.

Obviously it is not a standard Volvo Amazon. It is powered by a heavily modified 2.8-litre turbocharged inline-six made by Volvo. It produces 788bhp and peak torque of 723 lb ft and it runs on E85 biofuel. The fastest I have driven it is 205mph on a racetrack, but I think it will go faster and I reckon it does 0-60mph in less than three seconds.

I was at traffic lights and a young guy in a pimped-up Mitsubishi Evo pulled up and revved his engine a bit. I just laughed. This car is like turning up to a knife fight with an AK-47 — there’s nothing to prove.

It is not just the engine that has been modified in the Volvo Vöx — the entire car has been pimped and engineered. It’s mega. Aside from transforming it from a five-door estate to a three-door model, Vöcks added a six-speed transmission — a proper manual gearbox; none of this fancy steering-wheel-paddles stuff — a new rear differential, brakes from the Koenigsegg CC8S and adjustable front and rear suspension. As an engineer, I can see the work he has done on the car. It is perfect — the best-built, most beautifully finished car in the world.

As soon as I got it back to the UK, I took it for a spin down to Grimsby, near where I live. My God, it is frightening. You have to keep it pointing in a straight line. Once I was at traffic lights and a young guy in a pimped-up Mitsubishi Evo pulled up and revved his engine a bit. I just laughed. This car is like turning up to a knife fight with an AK-47 — there’s nothing to prove.

I don’t drive it fast on the road — why would I? Tracks and closed roads are where you can stretch its legs. The way I see it, anyone who says they drive their supercar fast on the road is still nowhere near its limits but no doubt beyond theirs.

The thing is, my Volvo Vöx is probably worth nothing, in that it isn’t an original car, doesn’t have a race pedigree and doesn’t come from a flash brand such as Ferrari. It is not a classic, so it has no monetary value. But if you tot up the cost of all the parts that have been used to make it and the man hours that have been put into building it, then I reckon I nicked it. 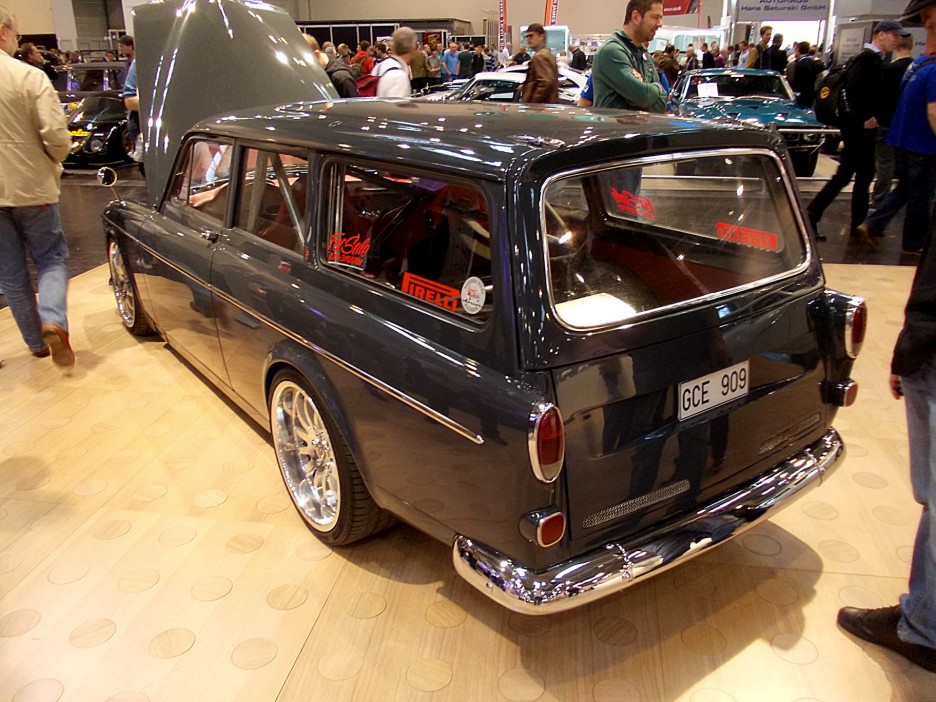 And that’s not all: for the price of a BMW M3, it will outstrip anything on the road. It won’t lose anything in depreciation or become outdated. More important, you won’t see another one anywhere in the world.

And I can look any Aston owner in the eye, whereas he’d probably fumble for his lights. That makes it the ultimate supercar, doesn’t it?

Guy Martin’s Spitfire aired on Channel 4 at 7.30pm on Sunday, October 12 and can currently be found on 4OD. Martin’s autobiography is published by Virgin and available at guymartinproper.com

A brief history of Guy Martin: motorcycles, bikes, sledges and a need for speed 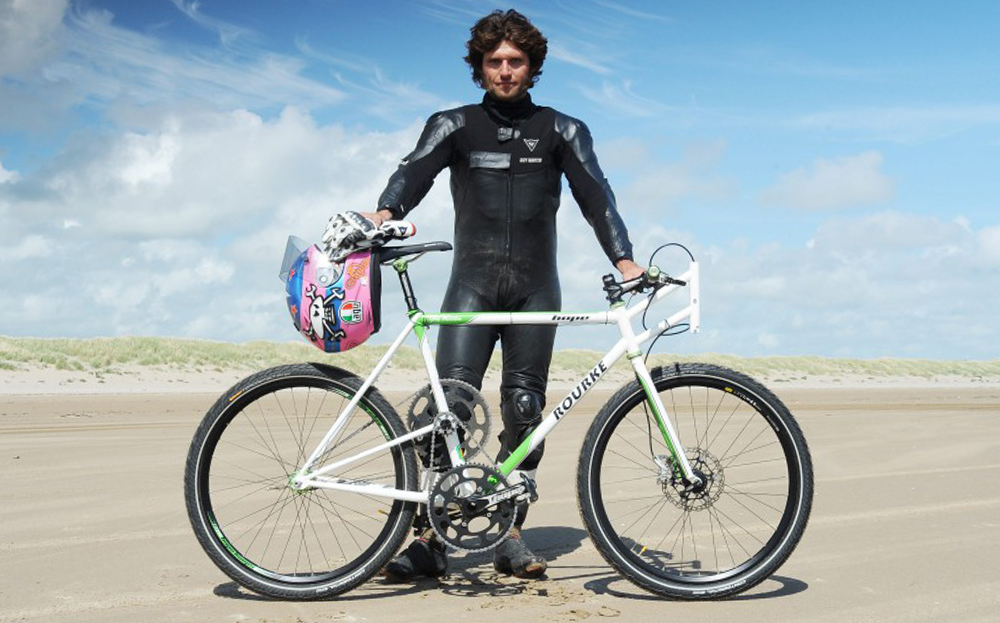 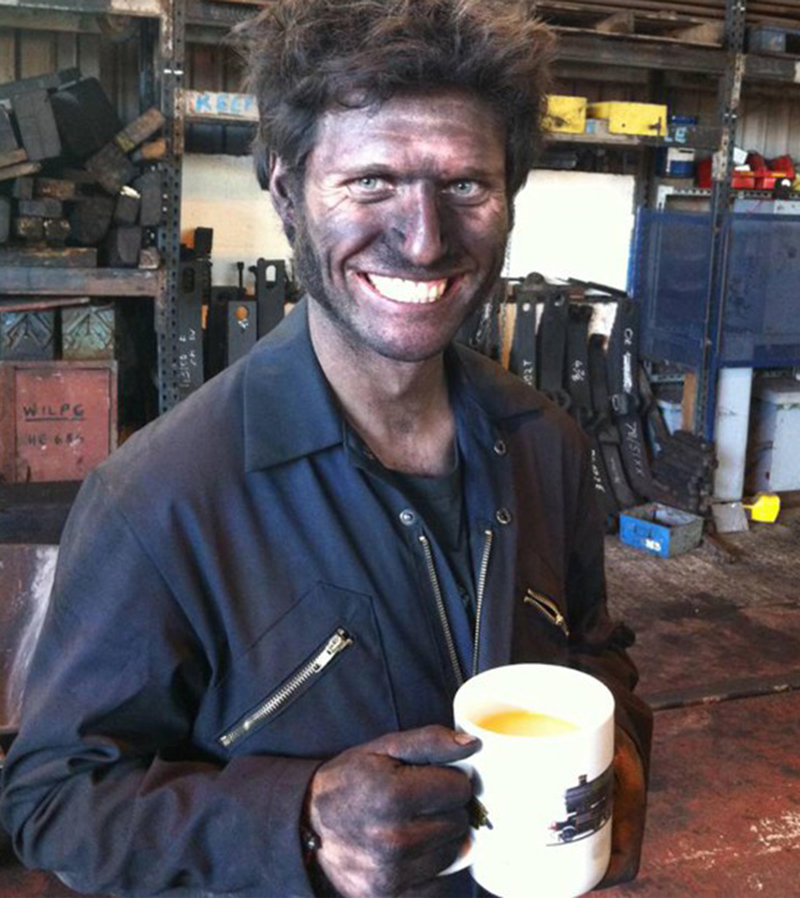 Guy Martin on: the Isle of Man TT

“You know if it all goes wrong, then it’s going to get messy. That is what I love about it. That’s where I get the buzz from. It is a right dangerous place and if you keep going back, the chances are it will catch up with you. When I win a TT, I will pack it in and find another challenge. Life is all about setting yourself goals and then achieving them.”

“I was driving down the dual carriageway and saw a guy about my age in a people carrier, bonnet up, steam coming out of the engine, kids in the back and wife at his side giving him all that. What does he do at the weekend? Mow the grass? Wash the car? I mean, how can I explain something like this [his life as a racer] to someone like that? It’s not in his DNA.”

“I have no TV, so I never see myself. I like films, but I can’t sit still for very long. I don’t have a smartphone either — just an old Nokia. There’s so much information out there, and I’m short enough on time as it is. You go on the internet and the next thing you know, hours have passed.”

Guy Martin on: living in Lincolnshire

“Lincolnshire is still a bit backwards and I like that. I only go to London once or twice a year and they’re only flying visits, but it makes me appreciate home more.”

“Motorcycles are a hobby. Trucks are work.”

“I love risking my life, but to get the buzz on a bike on public roads I’d need to be doing 180mph. You can’t, and I wouldn’t want to. I’ve got 21 points on my licence. I just keep getting caught in the van. I was in court recently. The judge asked me if it would affect my living if I couldn’t drive. I said, ‘I race motorbikes, I race mountain bikes and I go to work, and if I can’t drive, I can’t do any of them.’ He gave me three points and let me keep my licence.”

“The TV people are lovely but they are arty-farty. I’d do a day’s filming, but it’s not work, is it? I come home from working on trucks and I’m knackered and covered in shit, and that’s satisfaction.”