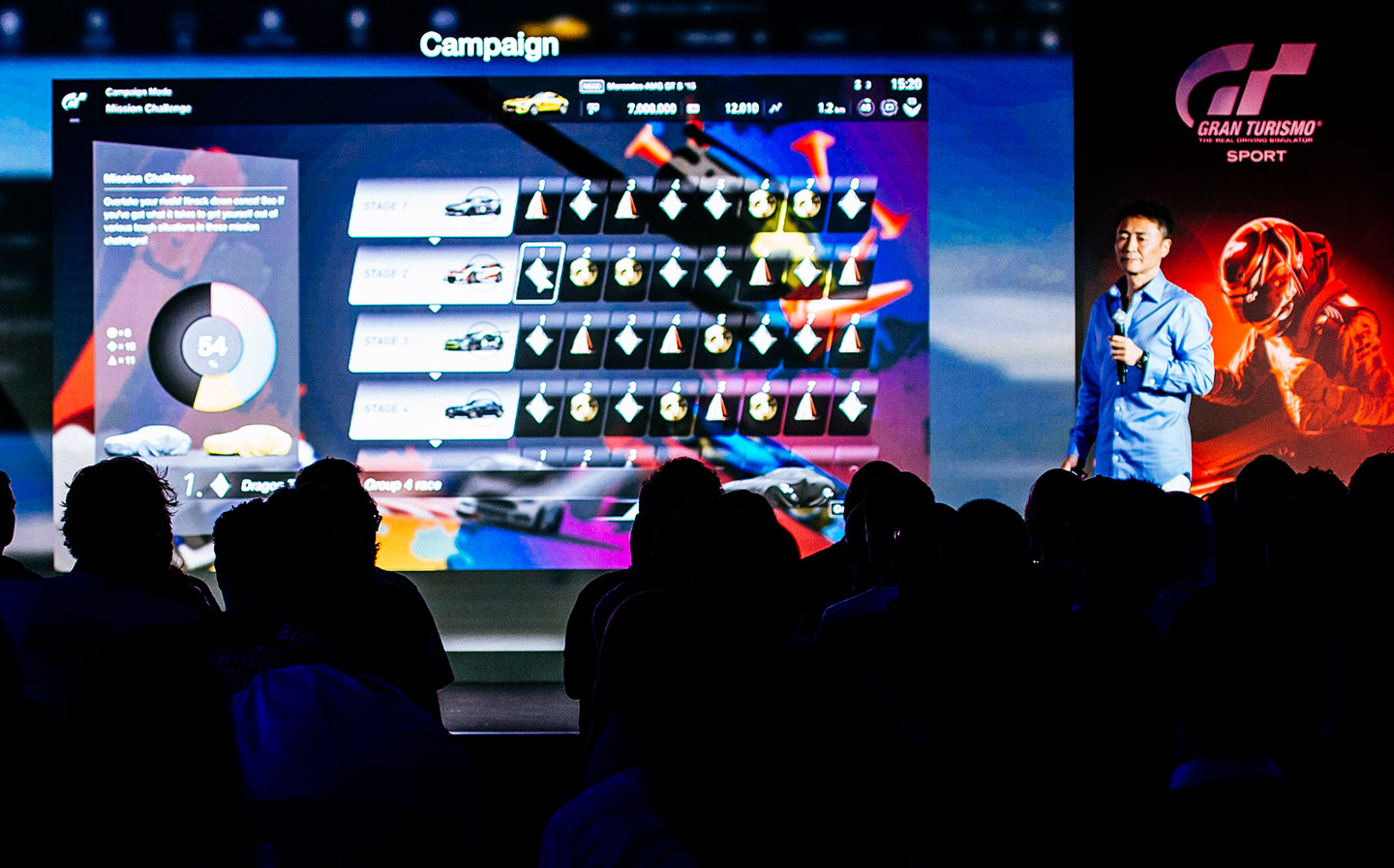 THE CREATOR of one of the world’s most successful racing video game franchises has revealed that he changed the way players can customise cars because gamers today have less mechanical knowledge than they did 20 years ago, when Gran Turismo was launched.

Fans of the series have found that GT Sport, the latest in Kazunori Yamauchi’s blockbusting racer for the Sony Playstation, appears not to have a “GT Mode” in its menu system. In this single player mode, gamers previously began the games with a small budget and used the money to buy a cheap, second-hand road car. They could then race it in increasingly challenging races to earn credits, with which they would purchase tuning upgrades, which they could add and set up in their virtual garage, in  the hope of making their car more competitive.

However, early preview releases of GT Sport, which officially launches today, showed that this system of career progression has been removed. The realisation sent shockwaves through the gaming community, with die-hard fans distressed that a central and beloved element of the Gran Turismo series appeared to have been dumped in favour of a new online Sport mode. Some commenters on Facebook claimed to have cancelled pre-orders of the full game due to the change in direction.

But at the game’s official launch in Modena, Italy, Yamauchi told Driving that all the elements of GT Mode are in fact still in the game, but it has been re-packaged to suit a new generation of gamers.

“In a narrow sense, the part that was the GT Mode in the past is now called Mission Challenge,” he said. “It’s single player, there are various different types of races, from the very short to the very long, with different regulations, and you can tune up the cars that you purchased to participate in those races.”

“When we did the first Gran Turismo, people knew what increased compression ratios do to your car. But the new users don’t have that knowledge”

GT Sport contains several types of rewards as players progress. As well as prize money, Mileage Points are awarded, which can be used to buy tuner items in what Yamauchi has labelled the Mileage Exchange. Combined with bonuses for distance travelled and experience, which can be earned more quickly by playing tougher opponents and switching off driver aids such as visible racing lines and braking assists, players can level up to unlock new circuits and win new cars.

“When people are talking about there’s no campaign mode, or no GT Mode anymore, that’s not quite true,” Yamauchi told us. “It’s just a change to the UI (user interface). All the things that you were able to do in the past in those modes are in the game.”

Instead of the familiar menu system, laid out like a map of the world with a home area that features your garage, as in previous Gran Turismo games, GT Sport features a horizontal menu with dropdrown sub-menus, much like the ones found on many websites and echoing the XMB (Xross Media Bar) found on the Playstation’s home menu.

This new approach will be alien to GT fans, but was necessary, according to Yamauchi. “Right now we have a very well organised menu and top menu, but if we’d placed all the features you see in the menus into a map format, I think they [players] would have felt it to be the exact same thing we had in the past,” he said.

As part of this UI update, the vehicle tuning system has been “simplified” due to reduced knowledge of how cars work, he adds.

“Twenty years ago, when we did the first Gran Turismo, people knew what happens when you change an air filter; people knew what increased compression ratios do to your car. But the new users don’t have that knowledge anymore because they’re not as interested in the cars, so we’ve simplified that area [of the game] so you can do the exact same thing you were doing in the past, but it’s more user-friendly for people just getting into cars.”

Some critics at the game’s launch, in Modena, Italy, suggested to Driving that, even if Yamauchi had wanted to include the classic GT Mode he wouldn’t have been able to, as each of the cars has been rebuilt for ultra-high definition 4k resolutions on the new PS4 Pro, and the new Scapes, as well as redesigned from a physics (handling) perspective.

“They couldn’t have created enough old, cheap cars to make the buying and selling process varied enough in time for launch,” said one commentator.

Reduced technical knowhow is not the only way gamers have changed, said Yamauchi. When asked whether the photographic mode, where vehicles can be placed on preset backdrops and then have effects such as motion blur and Instagram-style filters, for sharing on social media, was a reflection of the Selfie Generation, Yamauchi said he was as surprised as anyone that it is popular.

He said: “I had never imagined that in the short four days of open Beta that we did that there would be 1,060,000 photographs taken in the Scapes mode.The biggest surprise was the livery editor, because making a livery is pretty hard work. In four days, we had more than 300,000 liveries made. All these cars were driving online that looked nothing like the cars that we made in the game. I think it’s incredible the differences between the generations of players.”