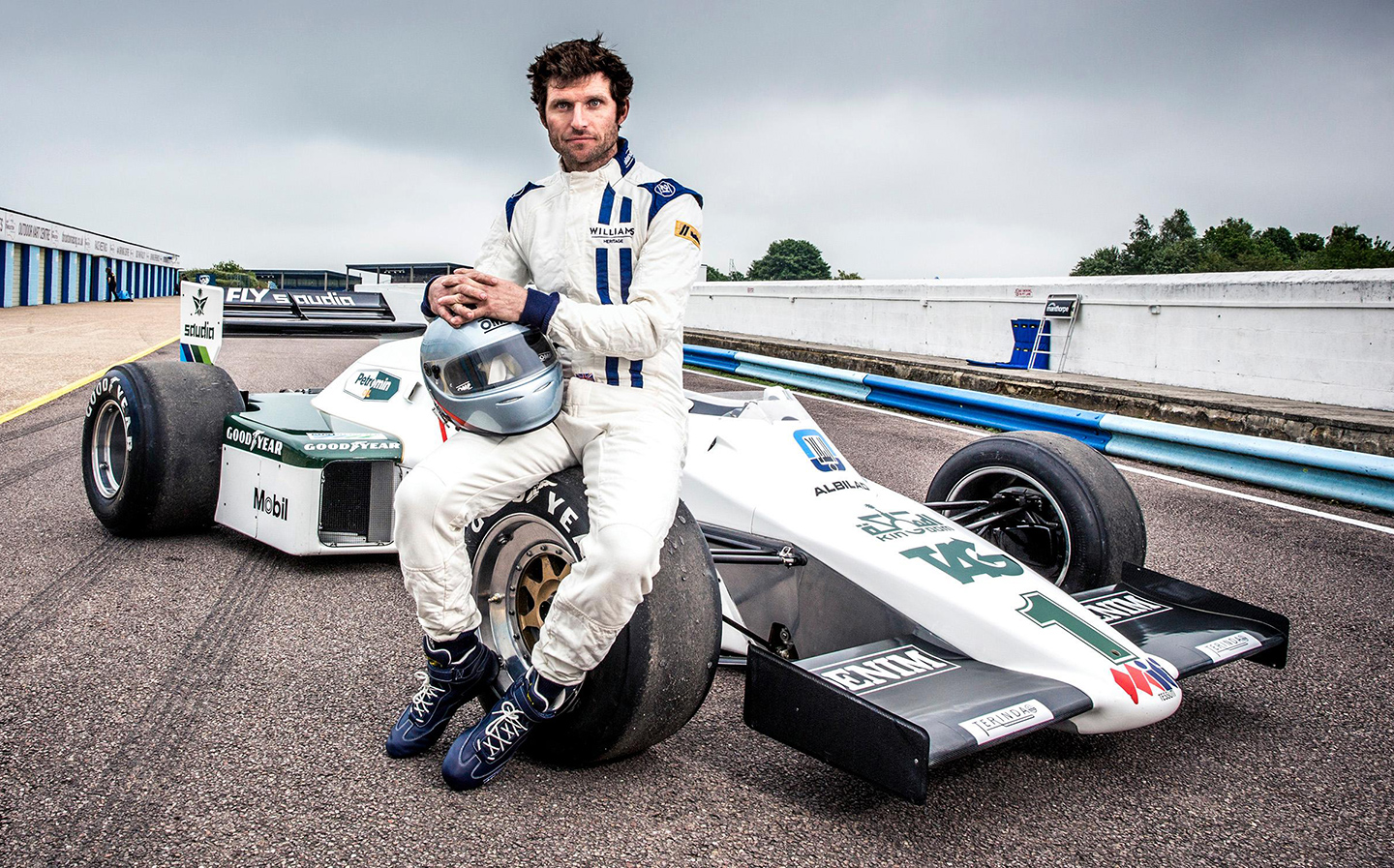 DRIVING a Formula One car was a massive eye-opening experience for me. Everything about it, such as the speed, braking, downforce and having a whole team working with you, was completely different from what I’ve been used to with motorbikes.

The car I drove was the first F1 car Ayrton Senna used — a 1983 Williams FW08C. I helped rebuild it, then tested it at Pembrey racing circuit in Carmarthenshire when it was pissing down — so that was a waste of time. Then I tried it at the Thruxton track in Hampshire, which was bloody fast. I didn’t get as much time as I’d have liked, though, because I wasn’t allowed to put many miles on the car, but I did eight laps, so I got my eye in. Every time I got in it, the Williams lads said, “Don’t crash it”, which I totally understood — it’s a classic.

But it meant I didn’t really feel comfortable pushing the car. Then I got smoked by the former F1 champion Jenson Button in my race with him before the British Grand Prix at Silverstone.

He was in a Williams six-wheeler from the early Eighties. He seemed to have a lot more downforce than I had — and a lot more skill. His car just looked like it was sucked to the floor.

Driving a car from that era gave me a great respect for F1 drivers of the Eighties and Nineties. They had balls of steel. Obviously the cars weren’t as fast as they are now, but today’s vehicles are just so safe. Drivers do still get injured, but back then it was a frequent occurrence. If the driver wasn’t killed by the impact, as happened to Senna at the San Marino Grand Prix in 1994, the chances were the car would burst into flames and you’d be burnt like Niki Lauda. It was a massively risky job.

Senna’s in my top three F1 drivers of all time. Michael Schumacher is another. And Nigel Mansell, although talk to some people who worked with him and they’ll say he was an arse. That was because he knew what he wanted and he’d do anything to get it.

Those drivers were gladiators, a bit like motorbike racers today, who don’t have the protection of a car. I broke my back twice, once in 2010 and again in 2015. For a while I had to take ice baths in an outdoor pool for the pain. The only time I know about it now is when I don’t get on my push-bike. If I don’t ride it for a week I feel like an old man — knackered. If I bike every day and touch my toes, I never feel a thing, even in the winter, working outside every day.

I was asked to do Top Gear, but if I did anything like that, it would take television work to the next level. And why would I want to do that?

I still have steel pins in me. The joke is: who gets all the metal for scrap value after I die? I’ve been warned my joints may go osteoarthritic, but they always tell you that. That’s why I have cod liver oil. I live on it. Whether it’s a placebo or not, I don’t know.

I’m taking a step back from top-level motorbike racing. I realise I should have packed it in a good few years ago. Now I’ve taken a step back, I’m thinking: “Whoa, hang on.” I got wrapped up in this whole whirlwind of motorbike racing and I forgot why I started.

The reason I started is that I love building them — the pain and the heartache. With racing, you just get drowned in the whole hype. When you’re finishing one racing season, you’re talking about what’s going to happen the next season, and I’ve been doing that for 10 years.

I was asked to do Top Gear, but if I did anything like that, it could become a way of life. It would take television work to the next level. And why would I want to do that? Obviously, it would be a great notch on the CV. Actually, it would also be great money, but I don’t live like a rock star.

I wouldn’t want to wake up one morning and realise that I believed the hype and had suddenly forgotten who I was and where I came from. All this came about because I was just a normal lad who didn’t try to be anything he wasn’t and who has stayed the same all the way through.

Some people will think I’m crackers, but I don’t want to be a celebrity. Nothing gives me more satisfaction than fixing lorries and the tractor. I own a John Deere that I use for spud-lifting and muckspreading. You get all the muck from pigs, cows and ducks, ferment it down, purify the methane that comes off and use it to generate electricity. It’s great.

I’ve also got a pub called the Marrowbone & Cleaver in Kirmington, the Lincolnshire village I grew up in, which has a great community. I’ve done bar work before, but I don’t in the pub. It’s run by my sister, Sally, and it’s flying.

It’s true I’ve been diagnosed with Asperger’s. But I would say: “What a load of tripe”

I worked for my dad for a while fixing lorries, but I got sacked for taking time off to do the TV series The Boat That Guy Built. He’d tell you he didn’t sack me, but he did. He never said: “You’re sacked.” He just came and took the works van away. I thought it had been nicked until my mate said: “I saw your dad driving down the road in it.” I thought: “It obviously means he doesn’t want me to come back.”

I have a daughter — Dot — and two dogs, Nigel and Stephen. People ask if having a family has changed my attitude to risk, but I wouldn’t say that. If anything, I’m trying to push the job on further. I’m trying to build a motorbike that can hit 300mph in a mile. There is no road-based motorbike that has done more than 300mph in one mile.

I’ve got a rolling road at my house to help build it. It might take two years, three years or 10 years; I don’t know. But it’s never been done. I’m also building a Ford Transit van to try to break the lap record at the Nürburgring for a commercial vehicle.

It’s true I’ve been diagnosed with Asperger’s syndrome, but I would say: “What a load of tripe.” They try to put names to it — “Oh, he’s like that because of this.” Everyone’s different. We’re all different. My girlfriend at the time persuaded me to see someone. I was turning her crackers, so she forced me — well, not forced me, but she said: “Will we go and see this psychologist?” Anyway, I sat there for a day, and it turned out it was a form of autism: Asperger’s.

The way I look at it is that maybe having that is why I am the way I am. Maybe that is all down to the autistic side. I don’t know. If there are any benefits to having it, it’s that you just get your head down and get on with things. I apply that to the way I work. If you’ve got an awkward job at work, you just get your head down until it’s sorted.

Now I’m eyeing up another race, from Florence to the Arctic Circle. I think I’m going to do that next year. I’ve also got a 1975 Pontiac Firebird I bought off my uncle for £1,800.

That’s going to be Dot’s first car and it’s going to be electric. I’ve got 16 years to convert it — but it’ll get done. A fully electric Pontiac Firebird.

This article first appeared in The Sunday Times Magazine on September 2, 2018