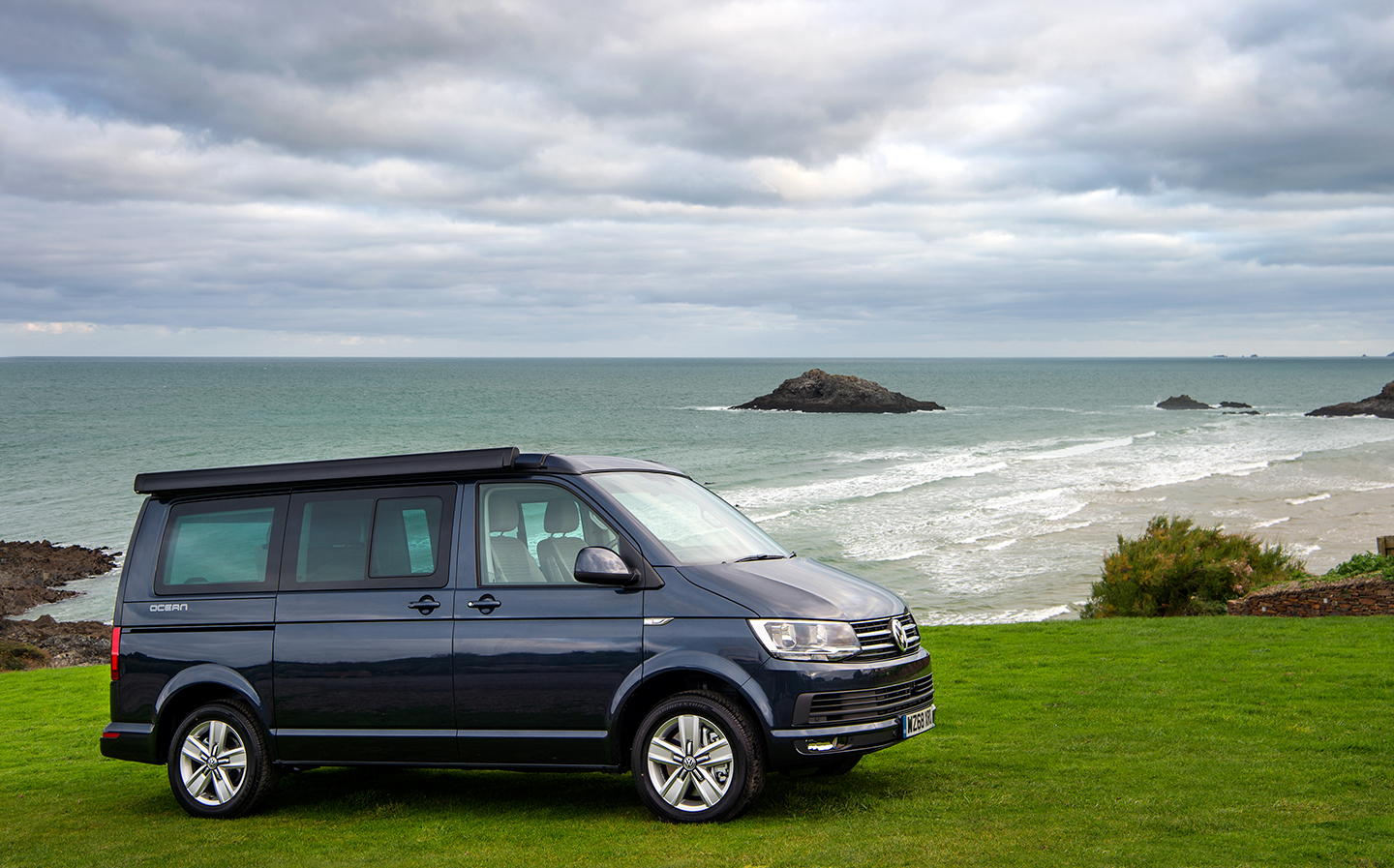 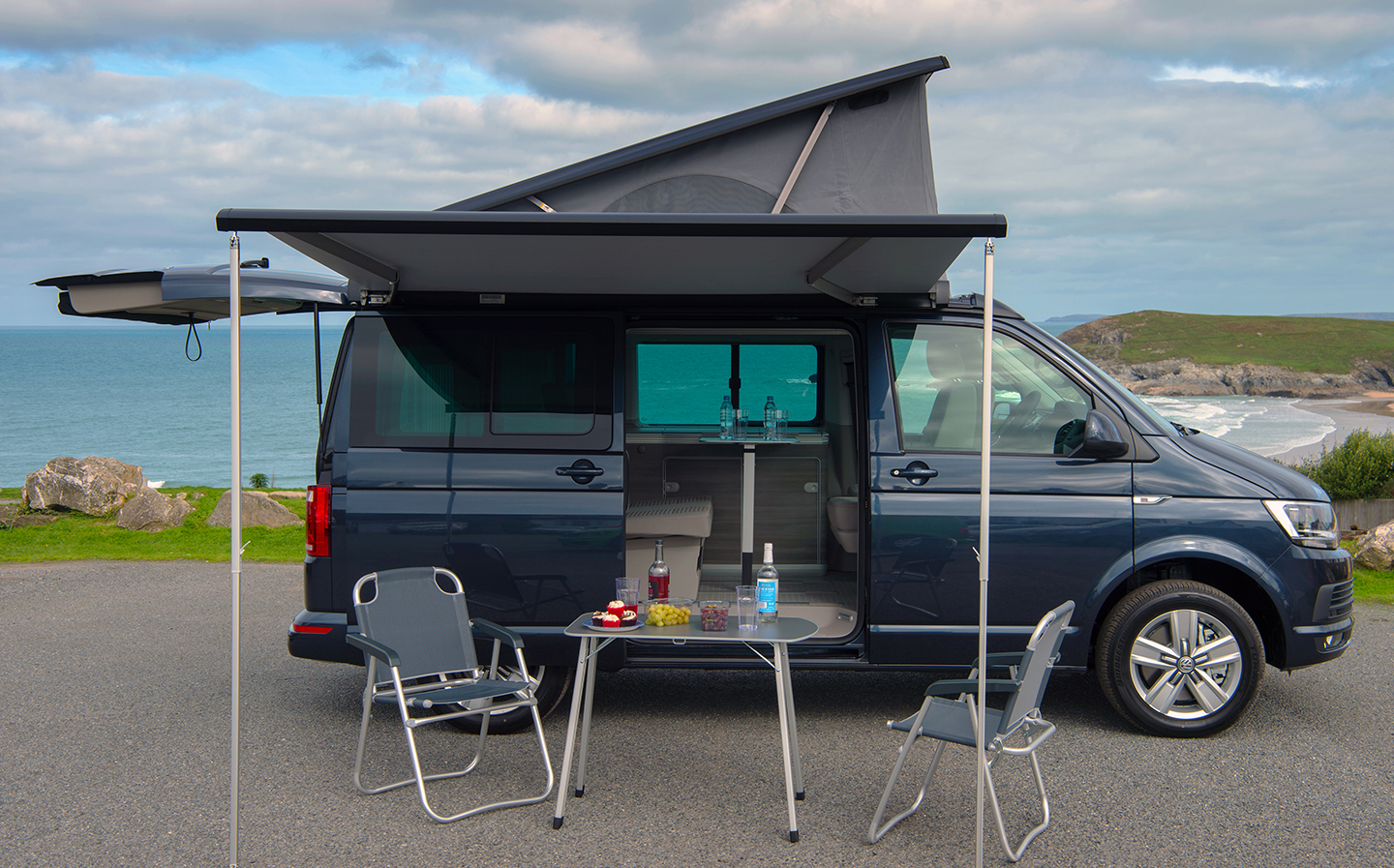 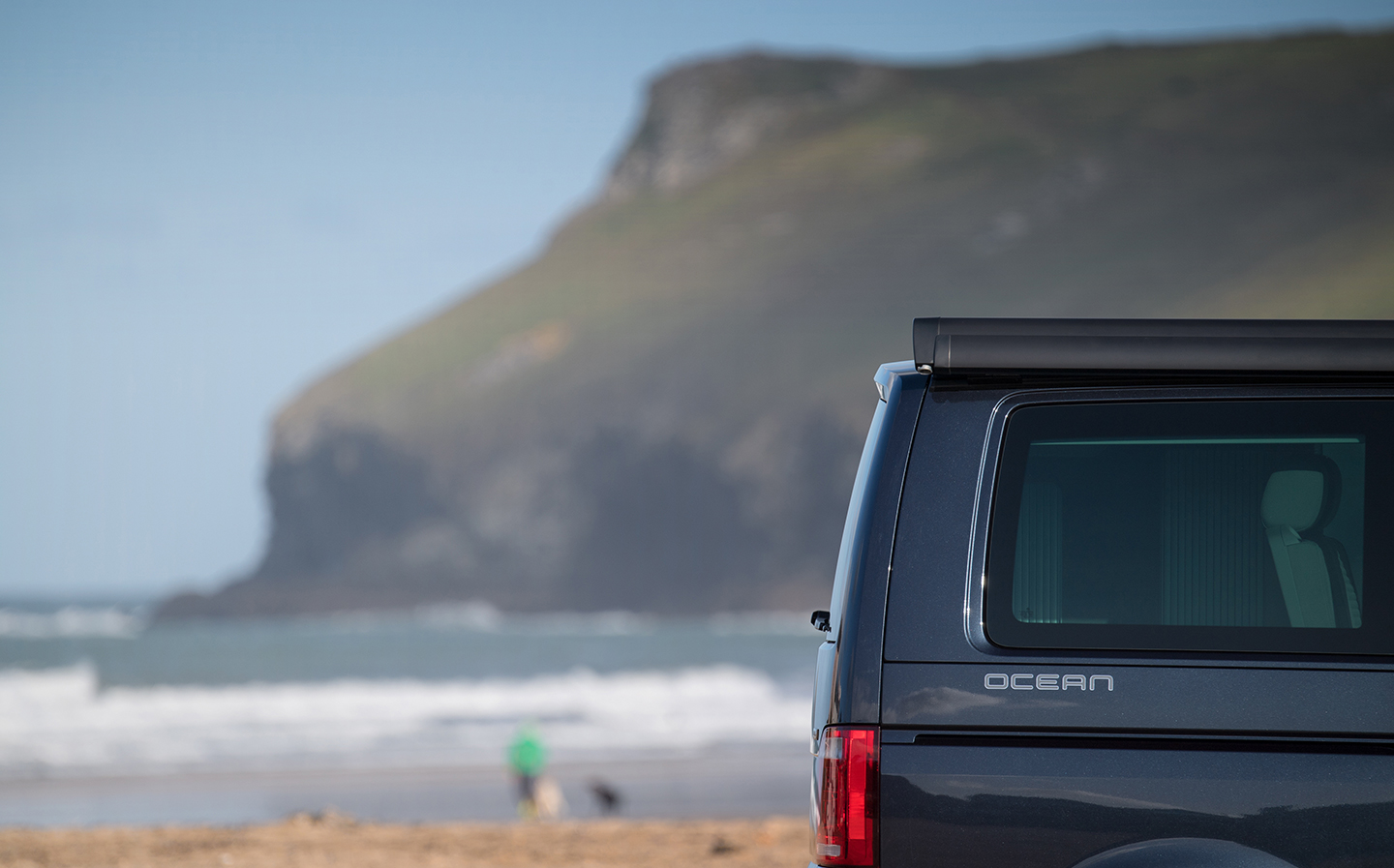 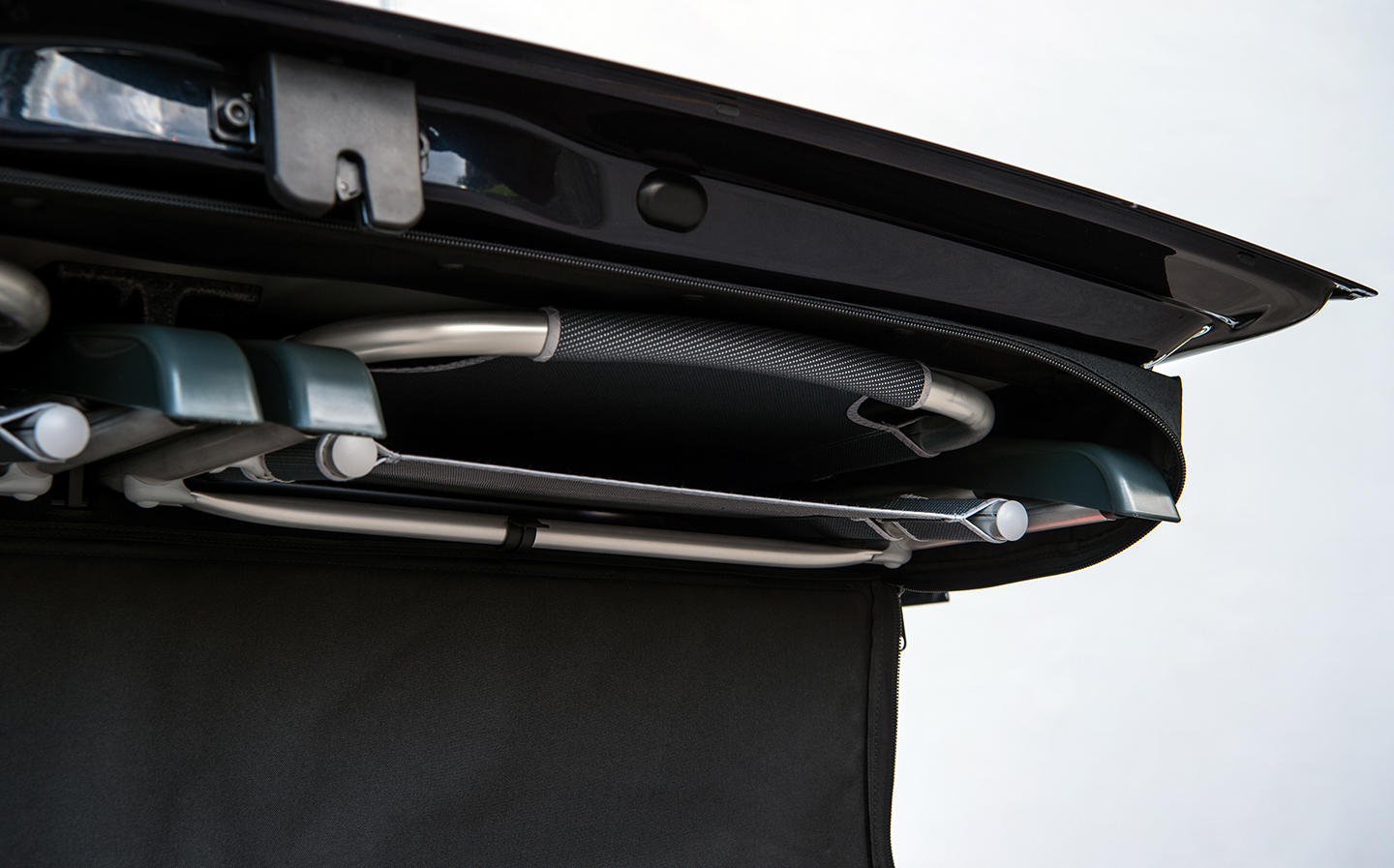 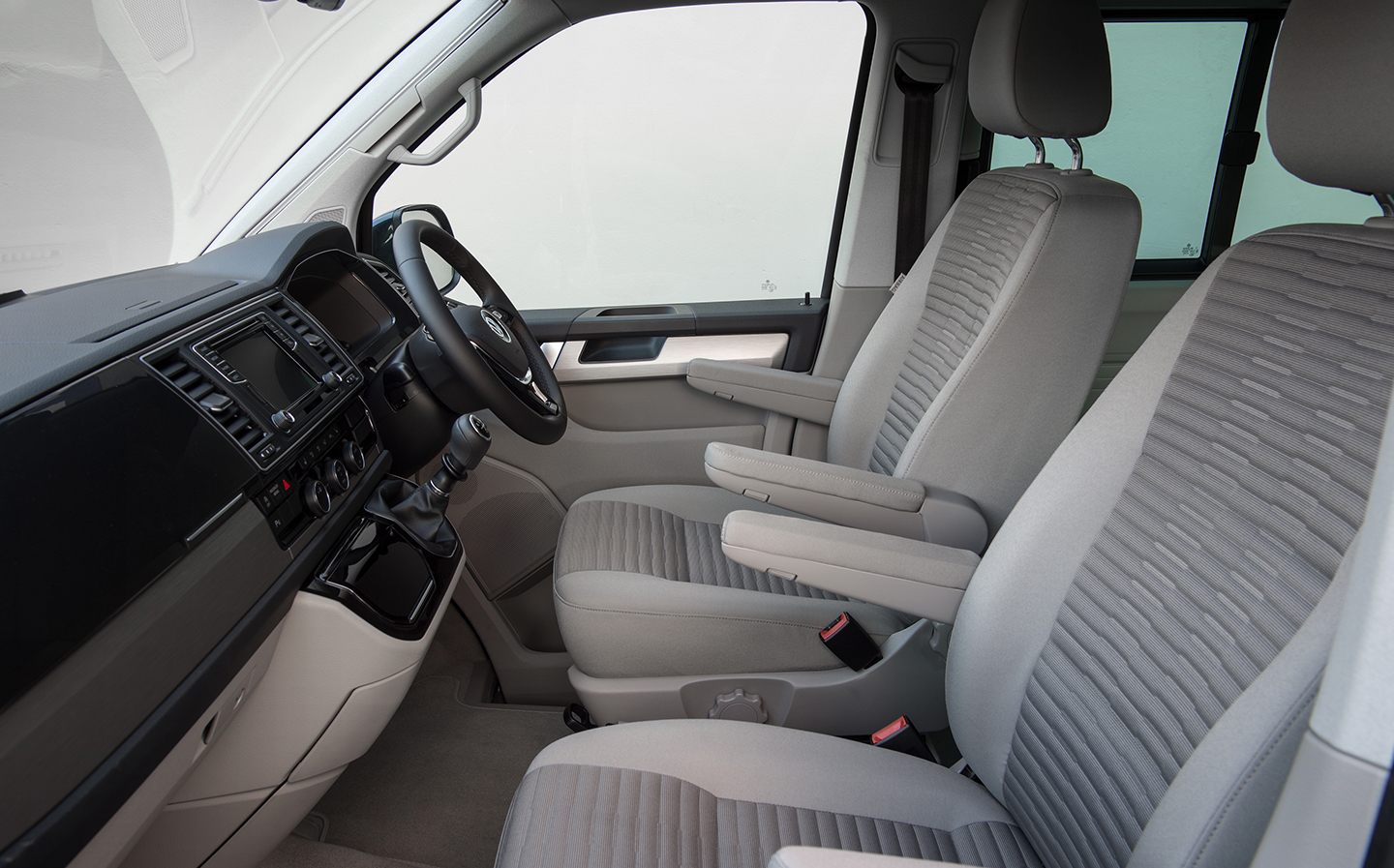 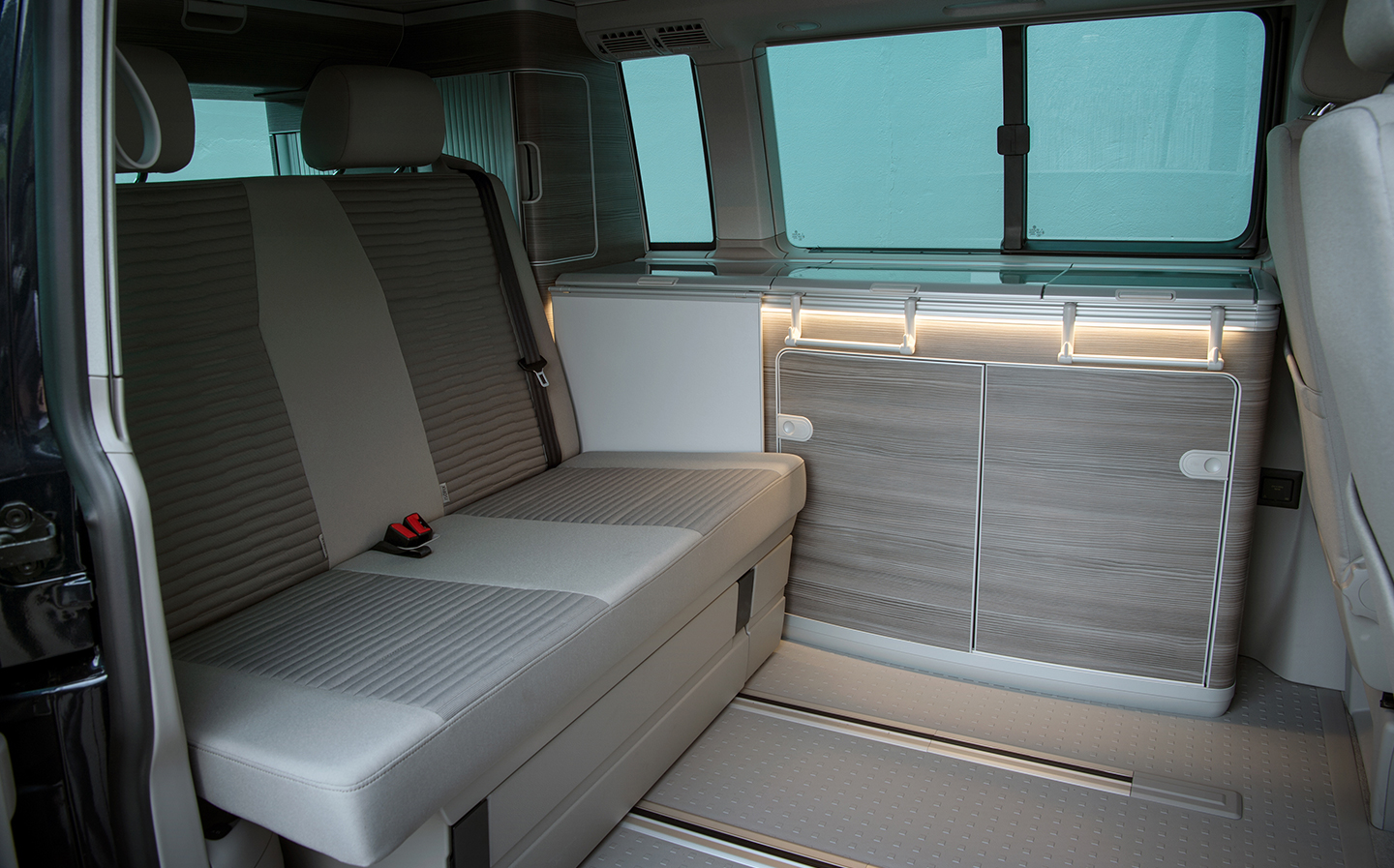 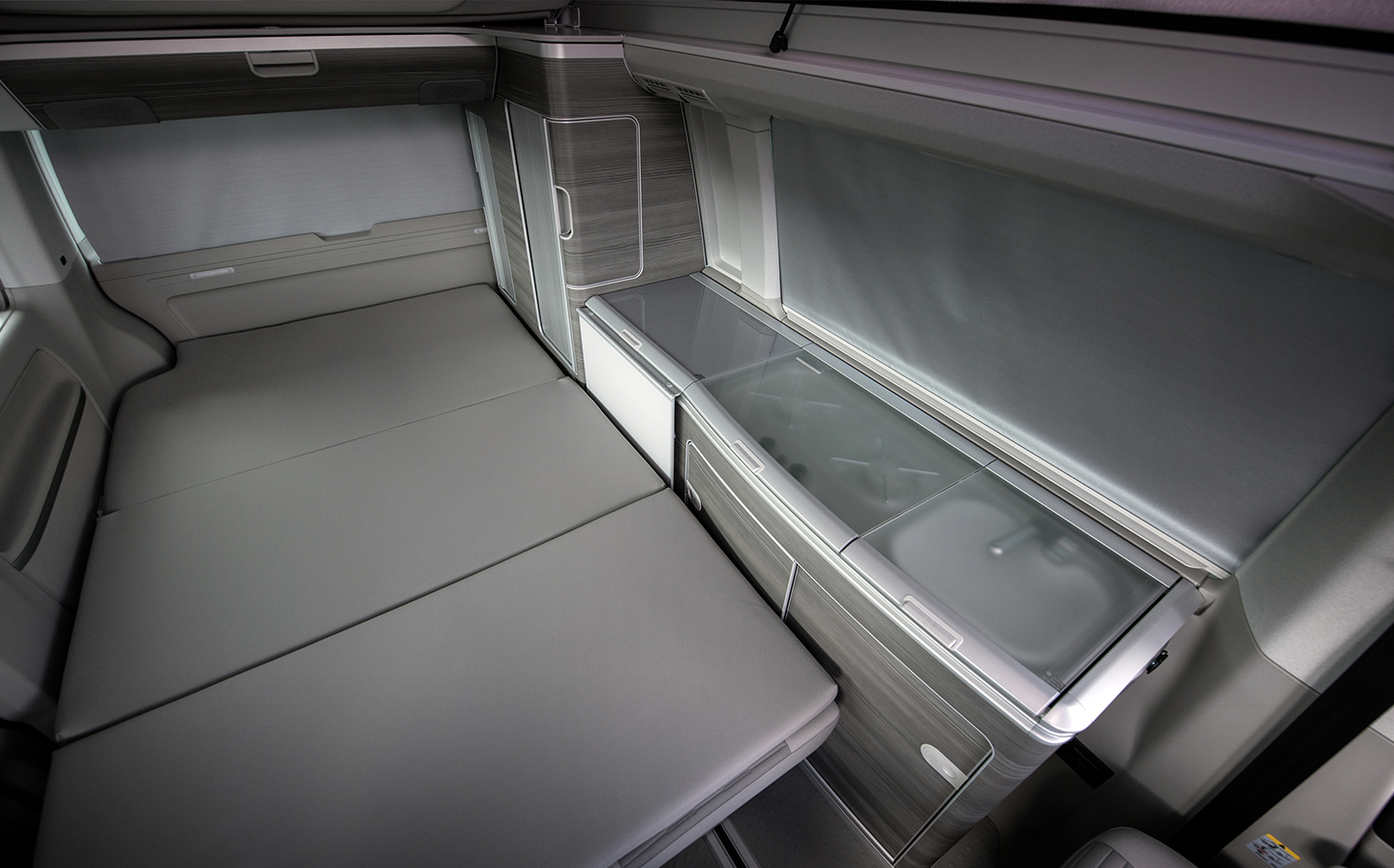 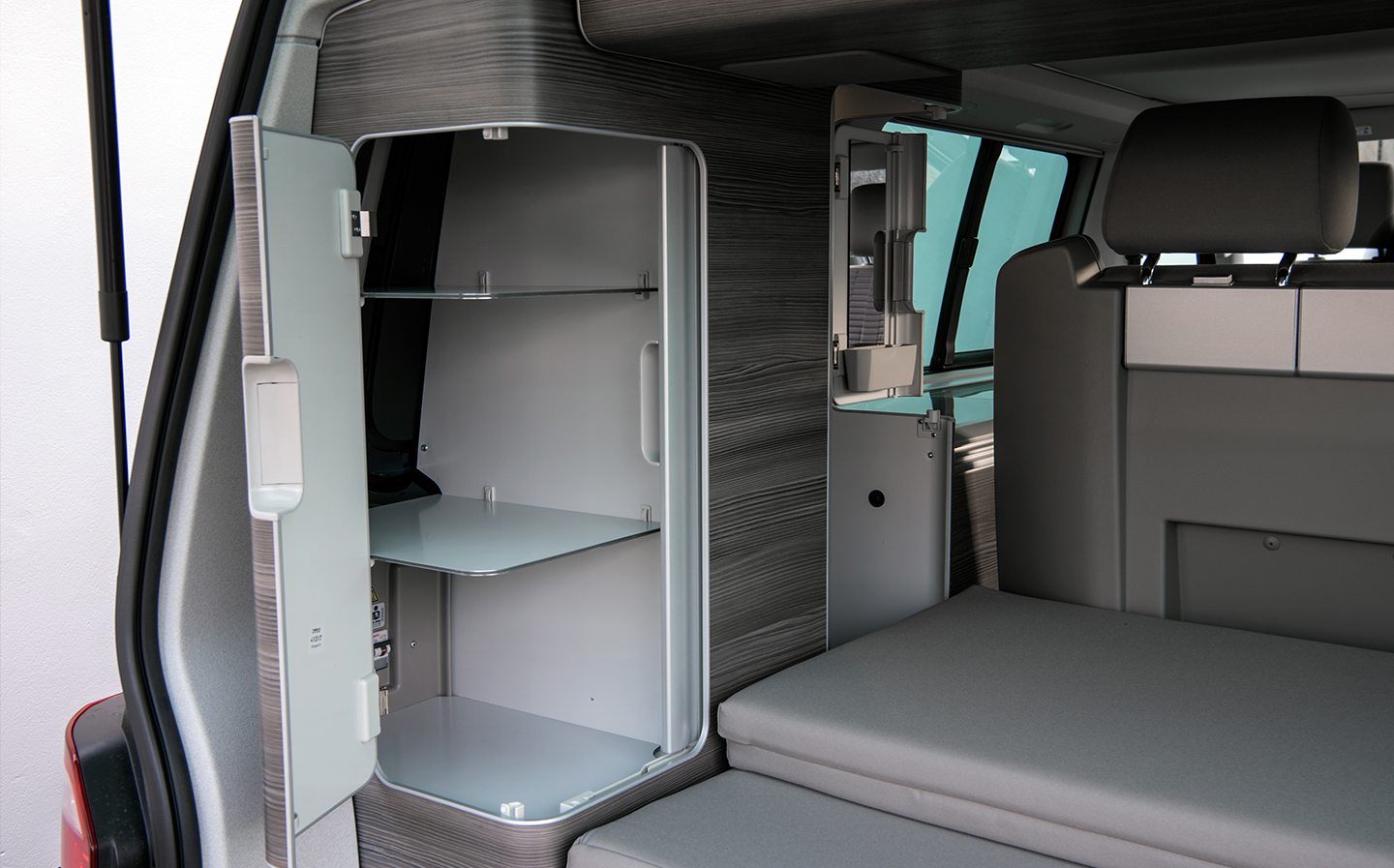 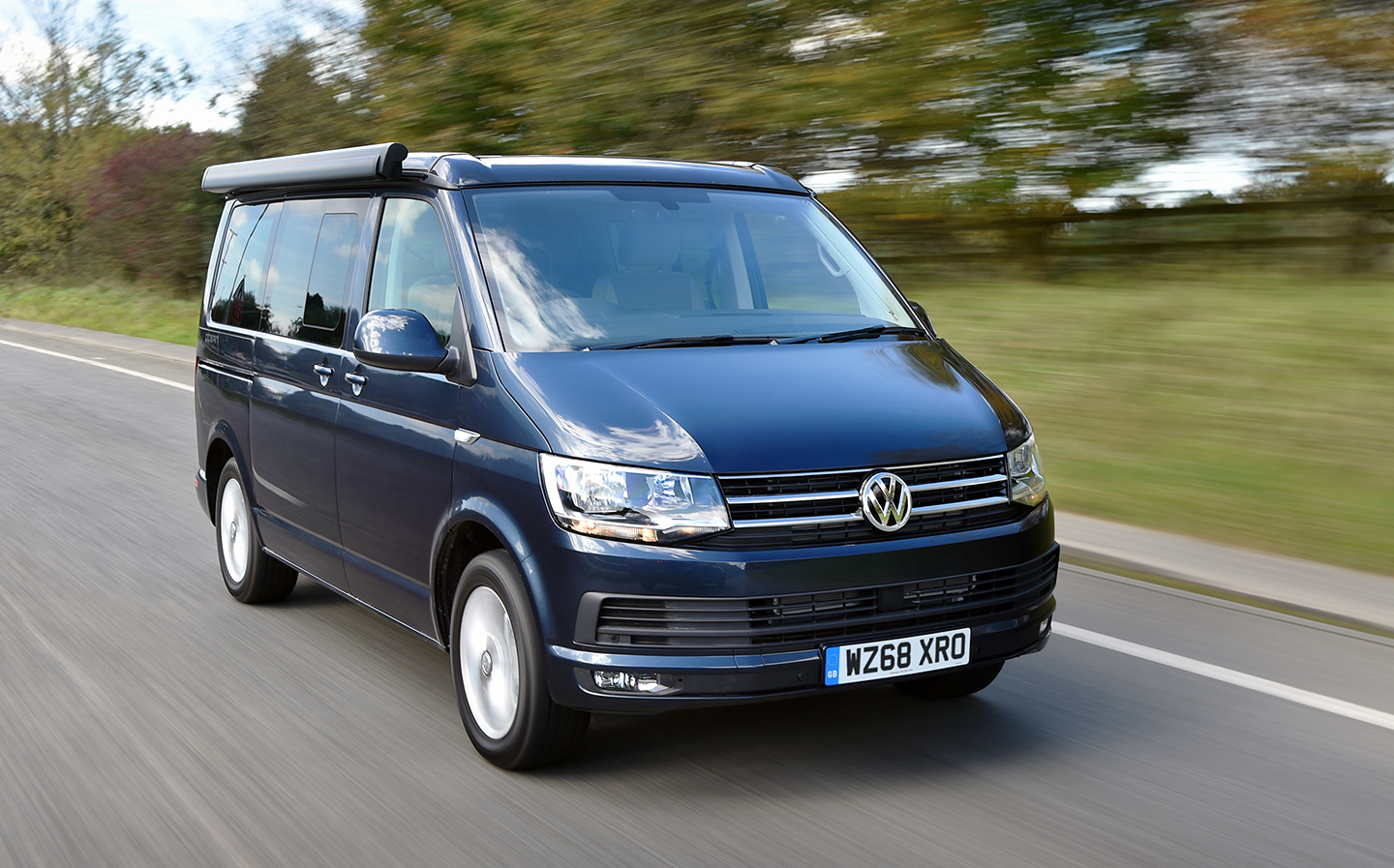 THE WILD Atlantic Way is a meandering route down Ireland’s west coast that takes you past towering cliffs, snug villages and Europe’s best surfing beaches.

Starting in the north at Malin Head, Co Donegal — made famous by its gale warnings in the shipping forecast — you meander past Europe’s best surf beaches, snug villages where Irish is the native tongue and the Cliffs of Moher in Co Clare — towering monuments that dwarf the famous 12 Apostles along Australia’s Great Ocean Road.

If you do the whole 1,500 miles you’ll arrive in Kinsale, Co Cork in the south, weather-beaten, tousle-haired and with sandy feet, ready to give up the rat race for a crofter’s cottage.

If 1,500 miles sounds a mighty long way for a smallish island, it’s because the road winds along the coast, sometimes doubling back on itself in a series of switchbacks and hairpins. If you take in all the nooks and coves, the miles soon build up.

There are plenty of arrival and departure points where you can begin and end your trip, so you can dip in and out according to the amount of time you can spare. If you have three or four days, as I did, there’s no better place to start than in Knock, Co Mayo.

The airfield is so small you expect Sopwith Camels to taxi onto a grass runway but there are car hire booths where you can pick up something decently driveable. It doesn’t have to be fancy — remember that the US satirist PJ O’Rourke said the fastest car in the world is a rental — just something that’ll handle the twists and turns and occasionally rutted roads.

Of course, the best way is to take your car on the ferry from mainland UK, which allows you to carry everything you need to cope with the temperamental Irish weather – including waterproofs and hiking boots – plus all the other paraphernalia you can’t take on a plane without extra hassle and expense: cameras if you’re keen on photography, binoculars for bird watching, not to mention thermos, maps and guide books. If you can arrange it, the set of wheels that more than any other embodies the romance of the road trip is a VW camper van.

The modern version, the Ocean, is spacious enough to house a kitchenette and nimble enough to hug the tarmac as it twists and turns along the coast, rising and falling between headlands.

You’ll have the road largely to yourself, but don’t rush. If you misjudge one of the steeply cambered bends you’ll end up in a peat bog, as testified by tyre tracks left by unwary drivers who have had to be towed out. Other perils include sudden dips that conceal oncoming farm traffic, and stone walls on either side of the narrow road. They are the same colour as the low cloud that often hangs around but not as soft if you hit them. You want this to be a trip that changes your life, not ends it.

From Knock, head to Charlestown, a couple of houses and a petrol station that the locals claim gave its name to the notorious Boston suburb that has reportedly bred more armed robbers than any other place in America. If that makes you uneasy, then get acquainted with the disarmingly friendly locals in Gallagher’s service station cafe. You can fill up for your journey on a pie that resembles a deflated Gaelic football and is just as heavy.

The stretch of road to Westport is straight-ish, which will give you time for your digestion to work before plunging into a series of loops beyond Louisburgh that takes you to Leenane in Co Galway across the Doolough Pass.

The R335 ends near Killary Harbour in Connemara, a 10-mile-long fjord and the boundary between Co Mayo and Co Galway. You can park and see pods of dolphins playing among the mussel rafts. The Sky Road along Clifden Bay and Streamstown Bay offers spectacular views of the Atlantic and the islands of Inishturk and Turbot.

A traffic jam here is defined as any more than two sheep on the road. So while you have the chance, stop the car, turn off the engine and get out. Take a minute for your heart to return to resting rate, breathe the air blown 2,000 miles from Newfoundland in Canada, then sigh as you remember only the day before being stuck in that jam on the A2, or the Newbury bypass.

This is how the transformation starts. By the time you’ve dipped down into Clifden, stopped to dine royally on Slyne Head seafood chowder and staggered back to your car under the huge Galway skies, you’ll have started the slow process of going native.

Just south of Clifden is the Alcock and Brown monument, a bleak memorial to the first non-stop transatlantic flight in 1919. John Alcock and Arthur Whitten Brown landed their First World War-era Vickers Vimy bomber here at the end of their record-breaking trip. Somehow this remote spot doesn’t seem important enough to carry a dramatic fact like that but there are great views, especially near sunset.

Avoid the N59 to Galway — part of a driving loop publicised in the tourist guides — and instead hug the coast, via Roundstone and take a detour towards Doonloughan to watch the Atlantic breakers and the Connemara ponies. 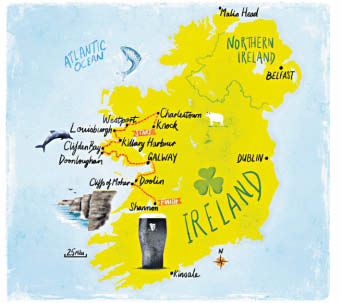 If Jack Kerouac’s protagonists in On the Road had been Irish, this is the route they would have taken, stopping at pubs instead of diners and downing a jar of mussels and a Jameson instead of a burger and bourbon, before careening off round the coast in a jalopy.

If you have time, head inland to Cong on the shores of Lough Corrib and stop at Ashford Castle, perhaps one of the grandest hotels in Ireland and a memorable experience. When you arrive you’re greeted by gate attendants in top hats and directed towards the sweeping drive up to the castle doors with spectacular views of the lough and mountains in the background. The rooms are elegant and steeped in history.

This is where Americans come for a taste of traditional Ireland, including film legends like John Wayne – who filmed The Quiet Man here – as well as presidents Reagan, Bush Senior and Clinton, Barbra Streisand and Tiger Woods. There are so many drawing rooms you easily get lost, and can always find a quiet corner near a log fire to lounge undisturbed with the papers and a cup of tea. The other attractions are the estate’s two giant Irish wolfhounds, Cronan and Garvan, which you can join on their morning walk.

From Cong, head south to Galway which seems like a metropolis compared with the crofter’s villages you’ve got used to but in reality it’s a market town with good traditional fish and chips at McDonagh’s on Quay Street, or Galway Bay rock oysters at the Seafood Bar on Kirwan’s Lane.

On the approach to the Cliffs of Moher the road has been widened to make room for the tourist coaches that thunder round the bends. There’s no getting away from the fact that commercialisation is changing this area, and bringing traffic with it.

Already, Shannon airport in Co Clare is the gateway to Ireland for thousands of Irish-American visitors who come to discover the land of their ancestors. At Gus O’Connor’s pub in Doolin you’ll meet what appears to be most of Boston’s police department. They claim, amid hearty laughter, that it’s their local and the wall is covered in police cap badges to prove it. You may suspect as the Join them for a pint of “plain” (before you commit the sin of asking, it’s from Flann O’Brien’s poem The Workman’s Friend, as in: “A pint of plain is your only man”) and listen to their tall tales from back home while they drink to life in the old country.

Unwinding on the Wild Atlantic Way

Drive it in a VW Ocean camper van

On the stereo Tennessee from Hans Zimmer’s Pearl Harbor. The rousing soundtrack does justice to the coast’s grandeur

Eat at Cullinan’s Guesthouse, Doolin (cullinansdoolin.com) and stop for rhubarb, apple and ginger pie at O’Donohue’s in Fanore, or Irish chocolate in Doolin (wildeirishchocolates.com).

How to get there (from the UK) Irish Ferries runs a daily service from Holyhead to Dublin (irishferries.com )