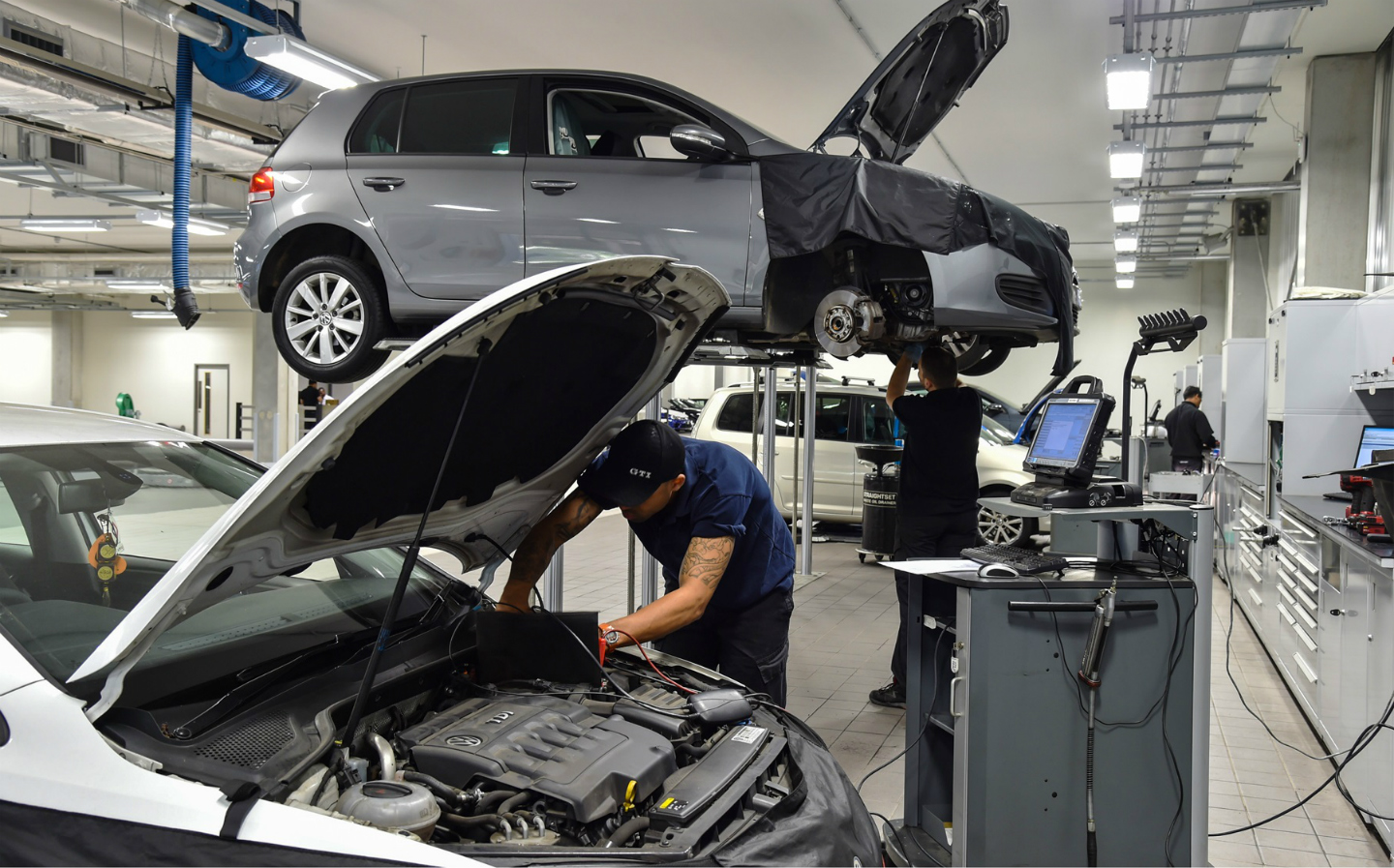 JUST WHEN Volkswagen thought it was safe to back in the water, the company has landed itself in further trouble with efforts to resolve the diesel emissions problem it created in the first place.

Paul Willis, VW UK’s managing director, revealed late last year that the company had received nearly 17,000 complaints from British drivers who had had their car fixed and were subsequently experiencing problems.

The revelation came following a query from Lilian Greenwood MP, chair of the all-party Transport Committee charged by the House of Commons with scrutiny of the Department for Transport.

The company denies there is a systemic issue, saying it represents a small minority of customers.

Many disgruntled customers have contacted Driving; these are their experiences.

In the US, Volkswagen Group agreed to buy back diesel-powered cars from owners or pay compensation. It may not sound expensive, but the cost of buying back cars in the US, coupled with the expense of paying dealers to repair cars around the world, has already seen VW Group hit for $24bn (£18bn). In September, the company revealed a further €2.5bn (£2.2bn) of costs associated with dieselgate.

In Britain and the EU, VW owners were offered a free-of-charge “fix” and an additional two years of warranty. The company did not need to buy back cars from owners in Europe, it maintained, because its actions were not illegal.

The fix involved a simple software update for the 1.2 and 2-litre engines, while the 1.6-litre models needed a hardware solution reported to be a plastic device that could cost less than £1.

There is apparent widespread dissatisfaction among many VW owners in Britain.

In 2016, Richard Belfield of west London, whose letter was published in the Driving section of The Sunday Times Magazine, reported:

“I had VW’s emissions-related software fix done to my 2011 Golf Plus BlueMotion in February. In May the car broke down on the M4 and my dealer identified a broken fuel injector and replaced it. In July the car failed again, and the exhaust gas recirculation valve needed replacing. My experience suggests systemic problems: VW’s claim that the fix has no effect on performance or reliability is wrong.”

More readers of Driving have since shared their experiences of the dieselgate fix – and all have been left feeling dissatisfied.

Tom Foy of Sheffield says his brother-in-law’s Skoda Yeti required a replacement emission control valve after having the modifications carried out. The dealer tried to charge £300 for this, and after complaining, a price of £100 was suggested. Eventually Skoda’s customer service department agreed to waive all charges.

Cardiff resident Alun Jones’ VW Caddy required five new fuel injectors and a replacement exhaust gas recirculation valve. Five injectors and one EGR valve later, the Caddy seems to be firing on all cylinders but he says he has lost confidence in the car and the brand.

The VW Tiguan of Martin Knapman, from Torquay, has since needed two replacement exhaust gas recirculation (EGR) valves to be fitted. The dealer than had to wait for new software to be sent by VW – resulting in the car being off the road for five weeks.

Suzanne Webber believes that the fuel economy of her Audi A3 has dropped by as much as an average of 10mpg, since having the dieselgate repair conducted. Lee Fallon, from Bury, reports the same issue: his Audi A4 has fallen from above 60mpg to around 35mpg, he says, and has experienced a noticeable drop in torque (pulling power) low in the diesel engine’s rev range.

After retiring, and having owned six VWs and four Audis in the past, the Highlands’ David Birdsall treated himself to a Volkswagen Tiguan. He took the car for its dieselgate repair at his dealer in Glasgow, and got home without drama, but it later broke down with the culprit being the exhaust gas recirculation valve. He was refused a courtesy car, despite his VW dealer keeping his car for two weeks, but VW did waive the cost of the repair.

A fault fuel injector left Leicester’s Ian Cross stranded at the side of the road in his VW Golf diesel – shortly after having VW carry out its dieselgate fix at a dealer in York.

Michelle Chandler-Haynes of Chorley says she is now stuck with a faulty Audi Q3 that she bought on finance, and would lose money if she sold it. It has left her stranded at the side of the road for three hours, and two replacement EGR valves have since been fitted.

A turbocharger and intercooler failed the Seat Ibiza of Michael Finlay, from Belfast, six week’s after having the emissions fix done. It led to a 12-week battle with Seat to have the cost of repairs covered by the car maker.

Other readers report cars running hot, having problems with the diesel particulate filter, high-engine idle speeds, or paying for repairs without knowing that VW should have been covering the cost. Some drivers have had to pay their breakdown provider to transport their car further afield than stipulated distances, to reach a VW garage, and others have faced long delays for repairs to be carried out – despite being told it would take no more than two days.

A spokesman for the Volkswagen Group told Driving that it would assess each problem on a case-by-case basis:

“Whenever a Volkswagen Group vehicle owner experiences issues with their vehicle, we urge them to have the vehicle examined by a mechanic within our authorised network of dealers. The dealer will then examine the vehicle, diagnose any issue and consider whether it would be appropriate for the Volkswagen Group to meet the cost of some or all of the repairs that may be necessary.”

That might include associated costs, such as a bill from a breakdown provider, it said.

Asked whether it would buy back cars from drivers who had lost confidence in their vehicle or the brand, the VW Group said its vehicles “…are of satisfactory quality, fit for purpose and as described at the point of sale, and so buybacks are not a necessary or appropriate response.”

The role of government

Reader Michael Anderson of Hucknall, Nottingham, who told us his 2011 Golf began entering regeneration mode at least every two weeks or 200/300 miles, says he believes the government has failed consumers.

He wrote: “Our Government is not supporting our cause or bringing VW to justice regarding this situation. They have flaunted the law and have got away with it, while their previously loyal customers are left to struggle with defective vehicles.”

Some point to the Twitter hashtag #vwfixfail as all the evidence needed to show that the repairs don’t work – with thousands of users sharing their cars’ problems post-dieselgate repair.

The VW Group told Driving that “…there is no systemic problem.”

Should I have my diesel VW Group car repaired?

Unsurprisingly, in light of the reported experiences, some drivers are choosing to not have the dieselgate fix carried out. This is their right, as the fix is optional and failing to have it carried out won’t invalidate a car’s warranty.

Mike Leach, a Skoda Octavia driver from the Swindon area, says he has refused to have the repair carried out – and believes most owners of affected VW Group cars don’t realise that they are within their rights to do so.

However, communications between drivers, Volkswagen and the Driver and Vehicle Standards Agency have been criticised for creating the impression that the dieselgate repair is mandatory.

The VW Group told Driving: “Customers can decline to have the technical measures implemented in their vehicle if they wish to do so, and this will not affect the validity of any pre-existing warranty.”