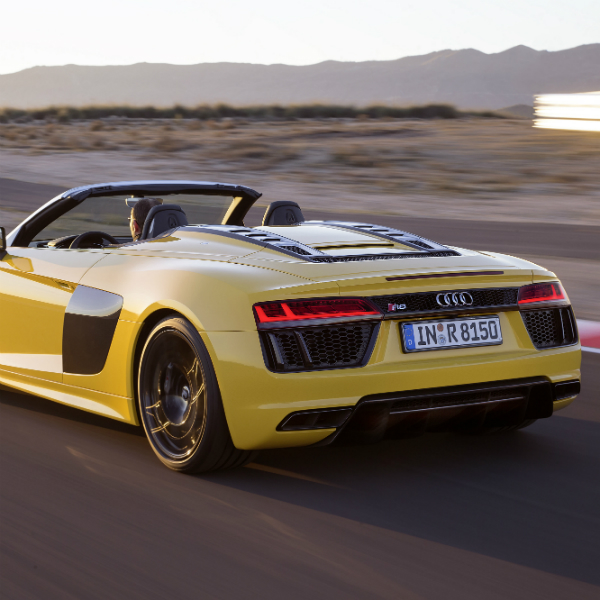 IT WAS a chilly spring morning outside the Javits exhibition centre but Audi turned up the heat at the Big Apple’s motor show today launching a Spyder version of its new R8 sports car.

The Spyder appears to be more than capable of turning heads without flying by onlookers at its top speed of 197mph. It features a retractable fabric roof that folds away beneath the engine cover and can be operated on the move, at speeds up to 31mph. So when drivers find they can no longer resist the impulse to pose with the roof down, there’s no need to pull over to drop the top.

Roland Schala, design chief for Audi R8 V10 Spyder, said the car was heavily influenced by racing technology. He developed it in parallel with the R8 GT-RS — the motor sports version. “All the lessons we learnt from the racing version we incorporated into the series car. Everything is focused on the driver. All the [main] controls can be adjusted from the steering wheel.”

Browse the used Audi R8s for sale on driving.co.uk

Once drivers have dropped their top, their hair will be left standing on end by the adrenaline rush of the 5.2-litre V10 engine, rather than any wind in the cabin. Engineers say that even at high speeds wind disturbance is minimal, thanks to deflectors that redirect airflow. Small microphones embedded in the seatbelts allow the driver or passenger to be heard on the phone with the roof down.

The engine does without turbochargers and revs to 7800rpm, generating up to 532bhp. That makes the R8 Spyder capable of 0-62mph in 3.6 seconds, a whisker slower than the coupé, reviewed here by Jeremy Clarkson.

The car’s body is said to be about 50% stiffer than that of the previous version, improving handling. Audi says the decision to retain a fabric roof was born of the desire to save weight. It weighs just 44kg, and is built into the aluminium spaceframe structure of the car, which has emergency roll-over bars. Three roof colours are available: black, brown and red.

Goodies include a Bang & Olufsen sound system with 13 speakers, including two in each seat at ear level. And the car maker says drivers will be able to display certain content from their smartphone on the car’s 12.3in display.

Handbuilt at a factory in Neckarsulm, near Stuttgart, it will cost around £130,000 for the standard model, and £147,000 for the Plus version. It goes on sale later this spring, and the first cars are due to arrive on British driveways late this year.