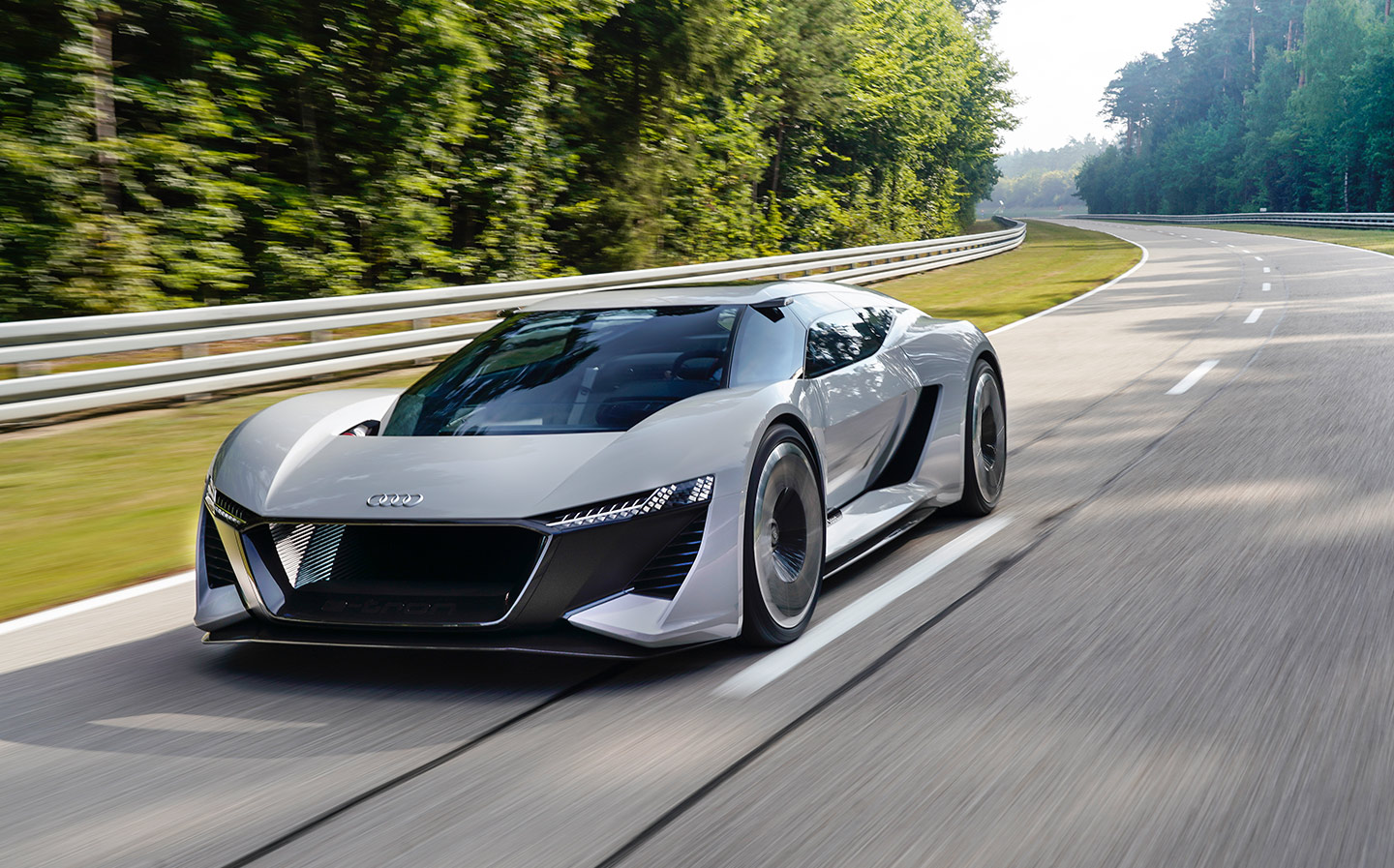 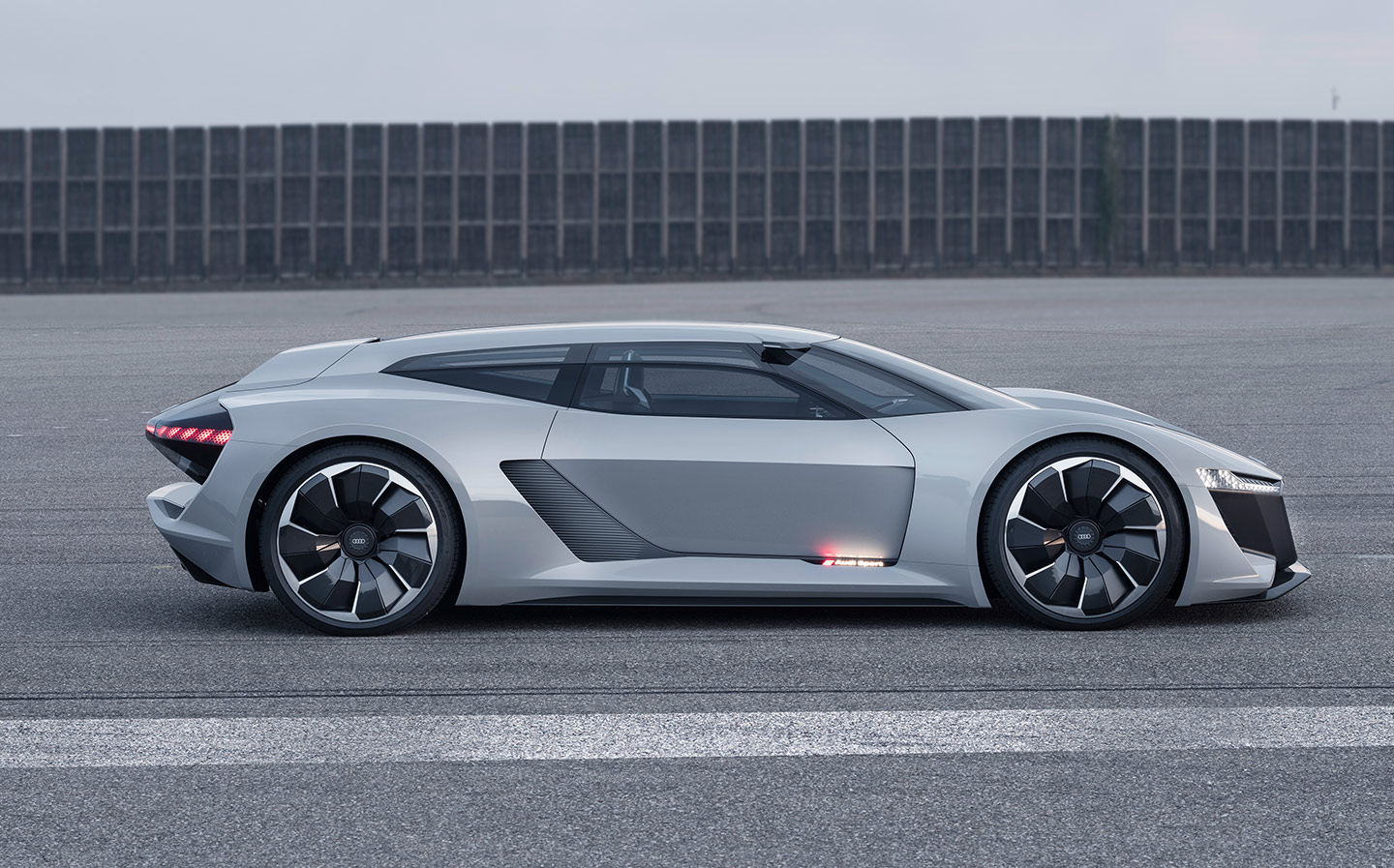 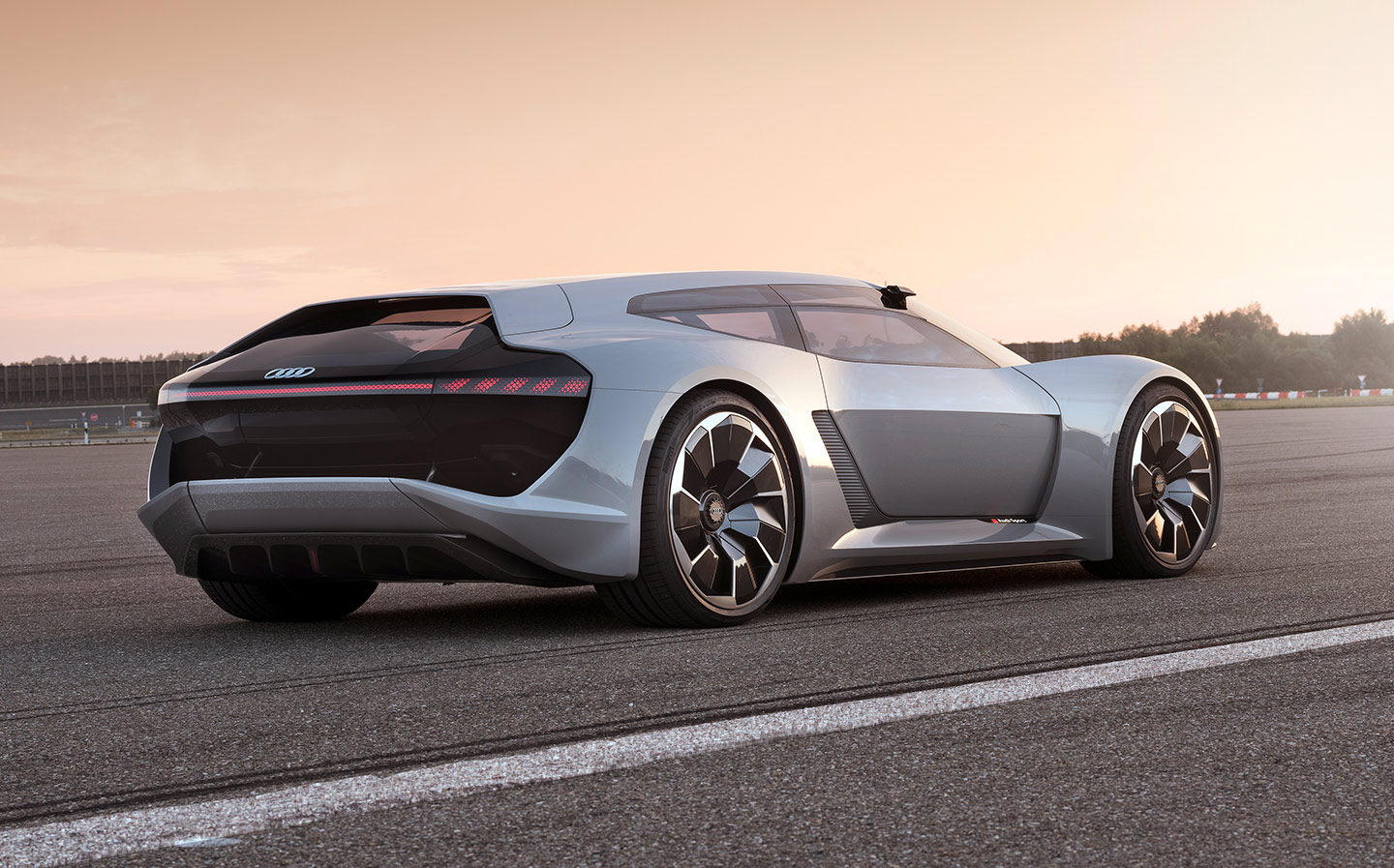 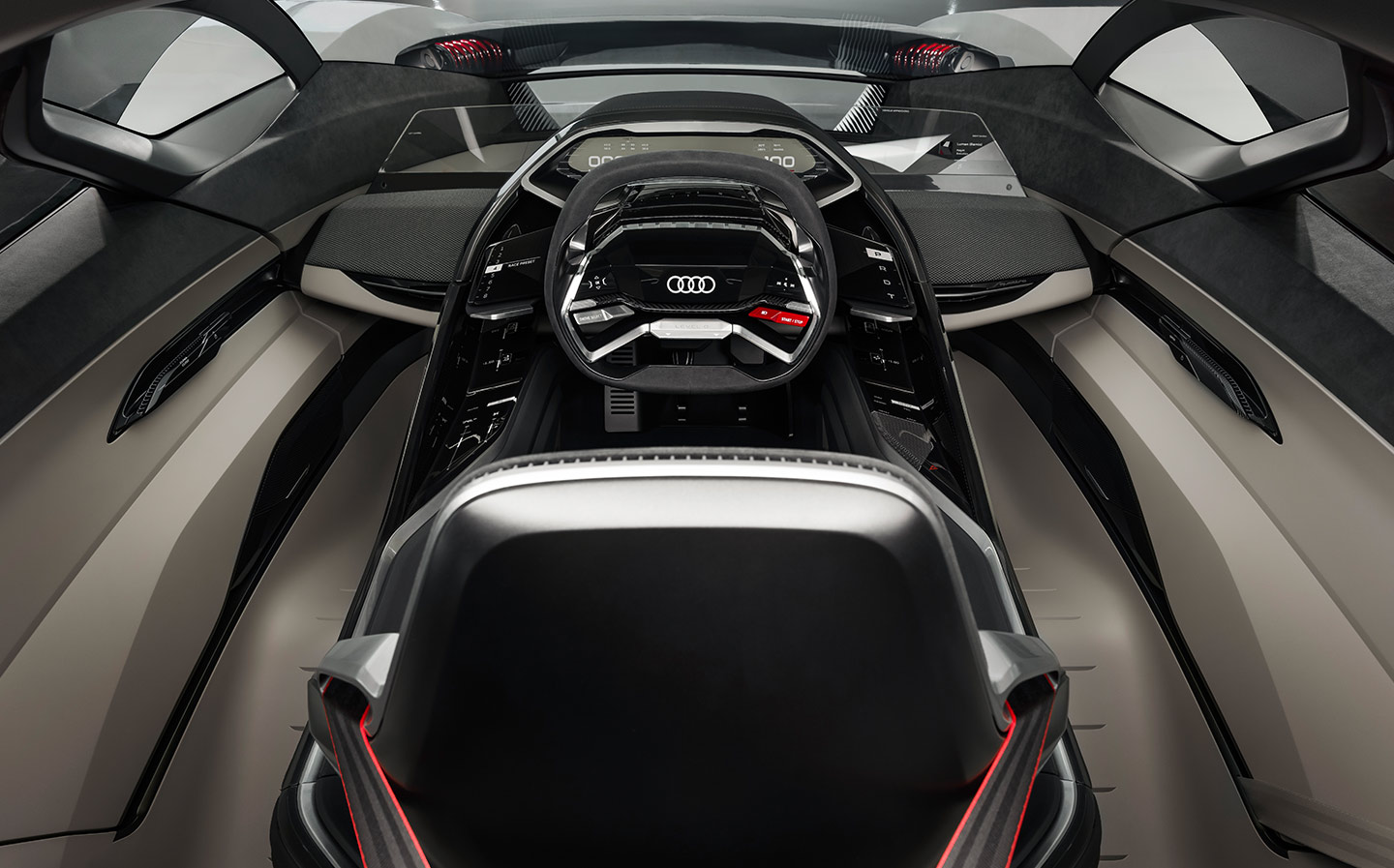 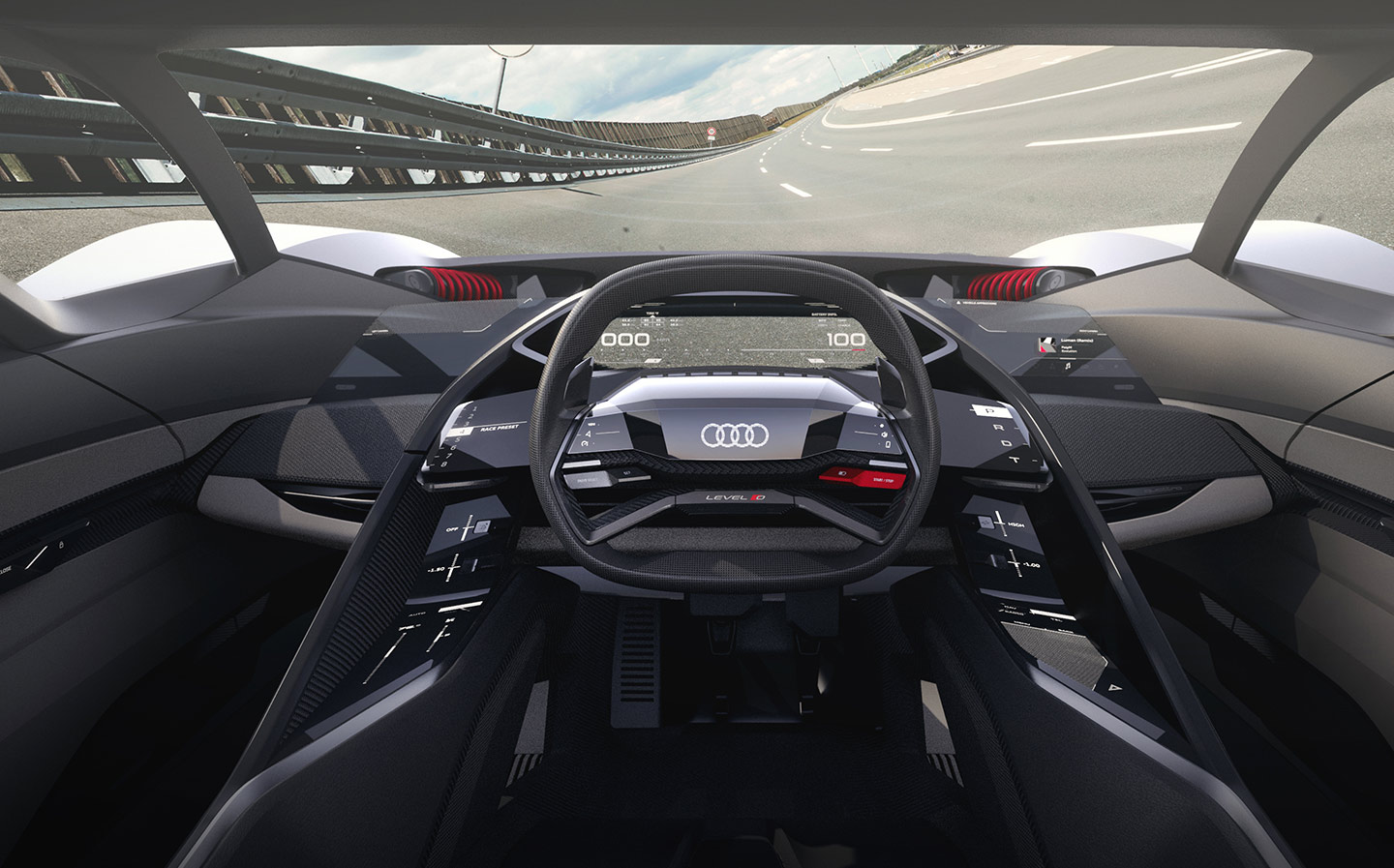 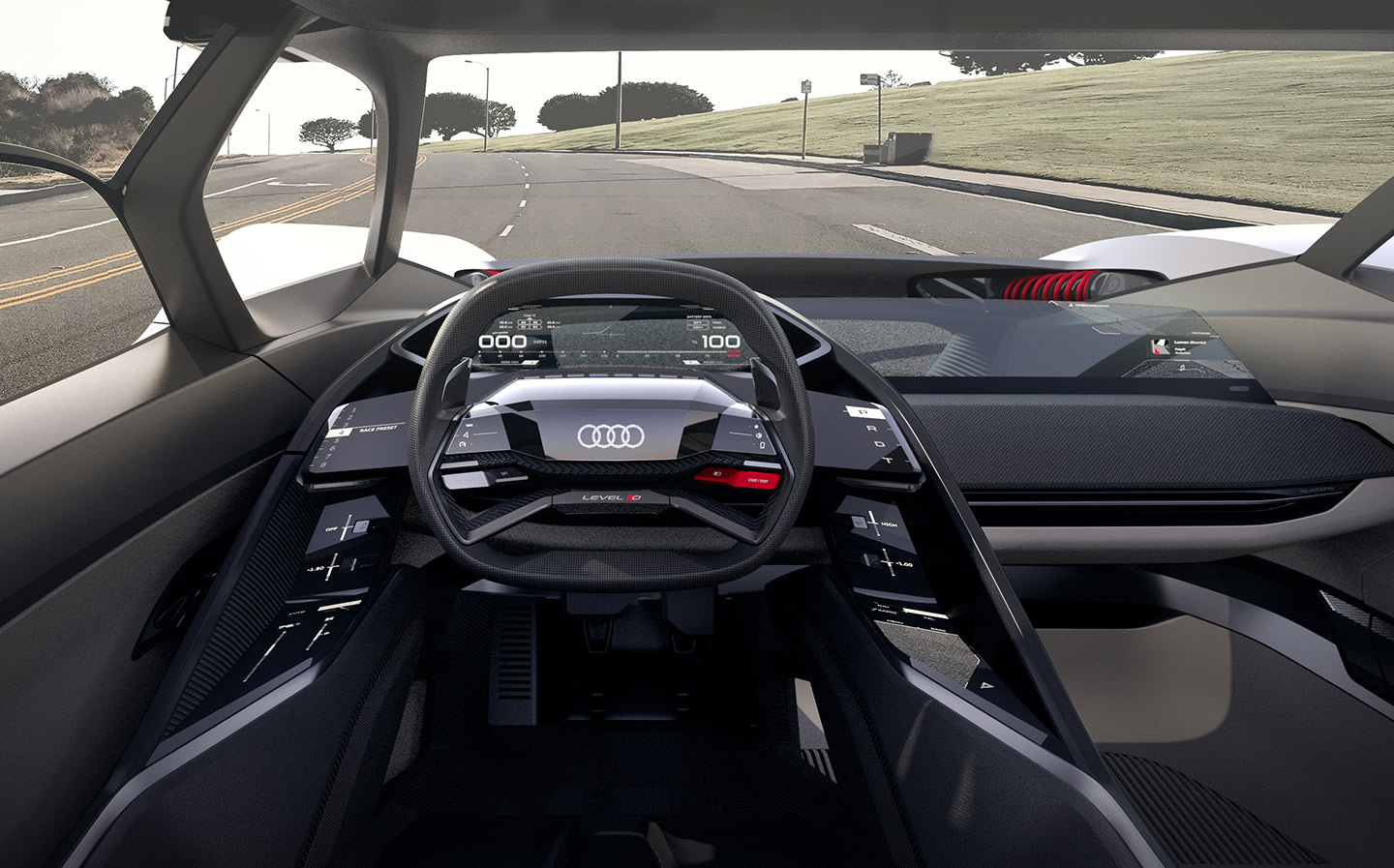 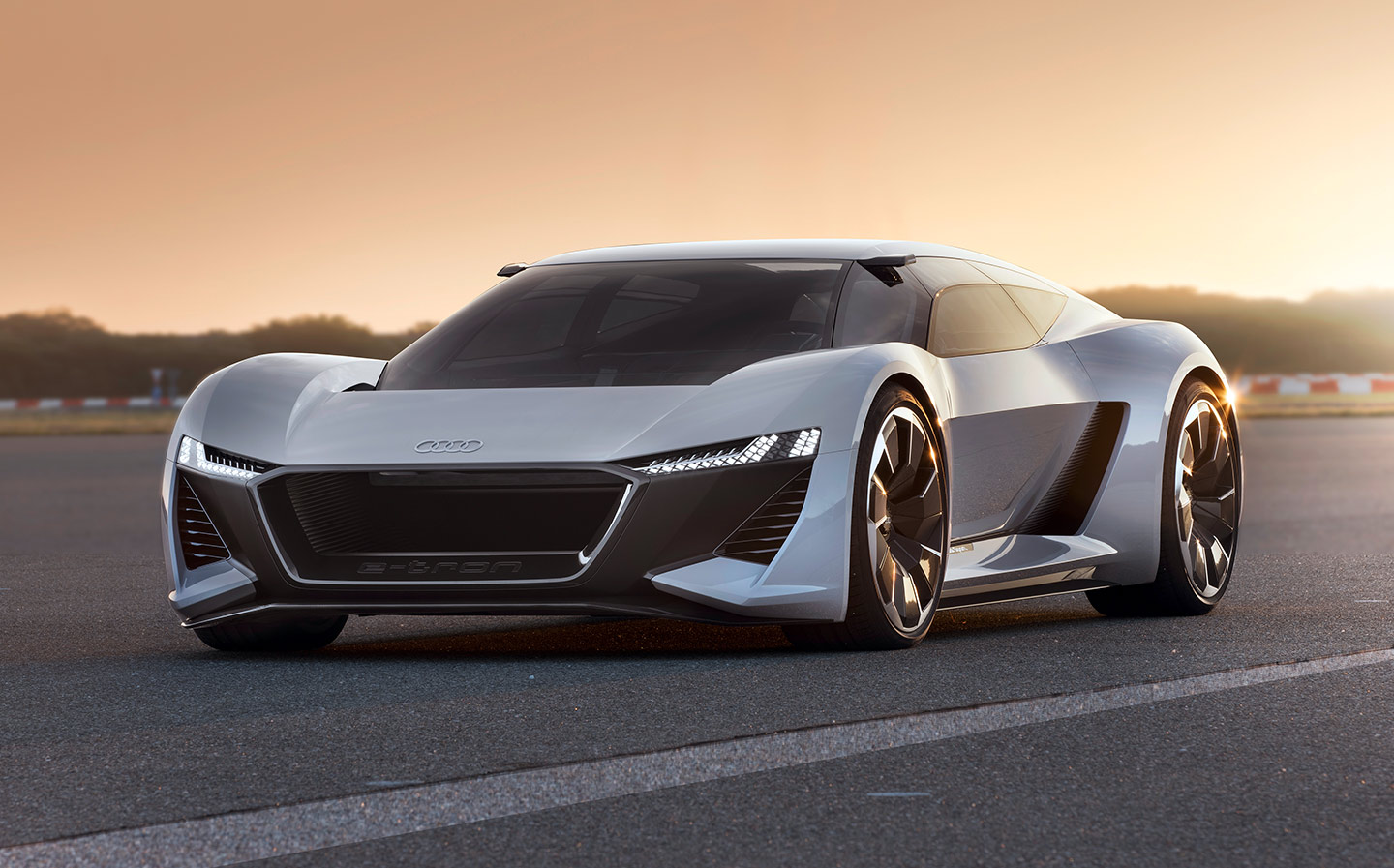 AUDI has revealed its latest electric concept – a wild track car and long-distance electric cruiser in a single transforming package.

Its Jekyll and Hyde personalities are reflected in the exterior design – the front resembling a Le Mans prototype racer and the rear looking like a shooting brake-style estate.

But while the ‘bread van’ back end can swallow a handy 470 litres of luggage – very nearly as much as an A4 saloon – don’t be fooled; its performance credentials put it right at the top of the supercar food chain.

The drivetrain is shared with the Audi Aicon concept that was unveiled last year, but while the Aicon was tuned for long-distance autonomous cruising, the Audi Sport-engineered PB18 e-tron is designed for speed.

Three electric motors – one 200hp unit at the front and two more at the rear with a combined 470hp (attached to each of the rear wheels via halfshafts) – produce a total output of 670hp, or a massive 764hp for short blasts, and 612 lb-ft of torque. Standstill to 62mph can be achieved in a claimed time of “scarcely more than 2 seconds”, which would make the PB18 e-tron much more potent than the forthcoming Taycan, from sister company Porsche.

And unlike the Aicon, most creature comforts have been removed in order to shave off as much weight as possible – the whole package comes in at around 1,550kg, which isn’t exactly featherweight but makes it a whopping 700kg less porky than a Tesla Model S P100D.

The performance side of the car is apparent in squat silhouette; at 4.53m long, the PB18 e-tron is between the Audi R8 and Ferrari 488 supercars in length, but the massive 2m width makes it broader than both of those cars, and three centimetres wider than an Audi Q7 SUV.

The 95kWh solid-state battery – mounted just behind the seats, putting the centre of gravity behind the driver but in front of the rear axle – is good for 311 miles (WLTP) on a charge, says Audi. It has inductive (wireless) charging capability and can accept power up to 800 volts, meaning a full recharge is possible in a claimed 15 minutes. That’s once the charging points capable of delivering that kind of power arrive, of course.

Inside, the minimalistic interior features one of the coolest bits of design we’ve seen in recent years: a driver’s seat and console that can slide from a side position to dead centre. This is possible thanks to electronic fly-by-wire steering and pedals, of course – there’s no mechanical connection to the drivetrain or 22in wheels.

When the driver’s seat is positioned to one side, there is room for a passenger, who can strap themselves into the sunken seat via a three-point seatbelt.

Meanwhile, the Audi R18 e-tron-inspired front end includes a bonnet that connects the two front wheel arches and acts as a wind deflector, but the space between the front wheels is not used for storage, as with a Tesla or Porsche, but is left empty, allowing the driver to see to the road below. This helps them position the car through corners, says the car maker.

To aid the view ahead, information such as speed, battery level and sat nav instructions are provided via translucent OLED screens, which means the whole look and feel of the cockpit can be tailored to the type of driving you’re doing on either track or road.

The Audi PB18 e-tron concept is revealed today at Pebble Beach Automotive Week in Monterey, California. It’s part of a new family of electrically-powered concepts from the car maker, which preview its cars for the next decade. Having already seen the Aicon luxury cruiser, and now the PB18 e-tron sports car, expect additional concepts designed for urban driving and other uses over the coming months.