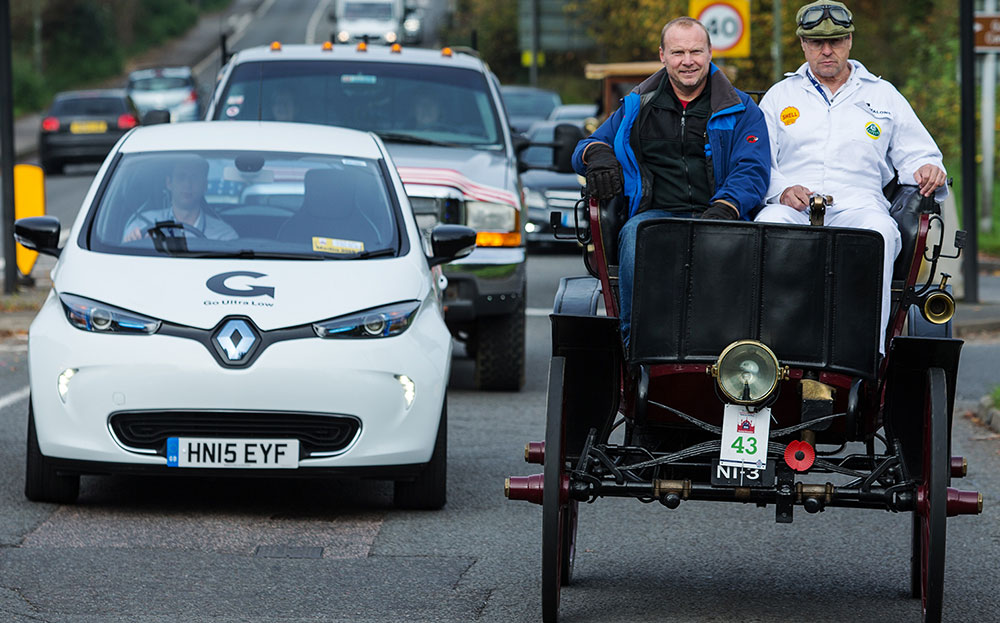 WHAT WILL they think of next? The Cleveland Runabout electric car needs no tedious recharging — you simply slide out the batteries, slip in some new ones and you’re on your way in five minutes. In fact the Runabout is a superior vehicle in every way. It is simple to operate, beautifully sensitive to steering and braking, very quiet, creates no pollution at point of use — and unusually for an electric car, it has character to burn.

Unfortunately you can’t buy one. The Runabout — or the Cleveland Sperry System Electric Stanhope, to give it its full name — is 115 years old, the only one of its kind in running order in the world and it dates from a time when nobody was sure whether electric, petrol or steam cars would rule the future. The four-stroke unit may have run away with the 20th century but some look upon this as a temporary aberration and say the electric car will win all hearts in the 21st.

Having driven both the Cleveland Runabout and today’s equivalent, the Renault Zoe, during the Bonhams London to Brighton veteran car run, I have to say that battery-powered vehicles have come a long way since the year 1900, but nowhere near far enough.

The Zoe was provided by Go Ultra Low, a joint government-industry group that exists to promote electric car uptake. The Zoe’s very nice, but let’s face it, it’s a glorified toy. Are the car makers — Volkswagen is part of the initiative — paying lip service to the electric concept just to keep the greenies quiet? And surely the government must realise that any serious uptake of electric cars would overwhelm Britain’s generating capacity, already worryingly stretched in winter. The question is: can they be serious?

At the end of the 19th century the Runabout seemed to have everything going for it. It did not suffer from the clatter and rattle of the suck-squeeze-bang-blow cycle, there was no need for oily-rag heroics, no juggling with spark advance or arm-breaking starting handles, no clutch to burn or gears to grind; it didn’t need hard-to-find petroleum and it couldn’t be stalled — it looked like a runaway winner.

The government must realise that any serious uptake of electric cars would overwhelm Britain’s generating capacity, already worryingly stretched in winter. The question is: can they be serious?

But there were drawbacks. The Runabout found 15mph an uphill struggle and ran out of juice after not much more than 20 miles. To be fair, in an era when most people travelled short distances, that was plenty and no one complained of range anxiety. As roads improved and petrol was made widely available, long-distance driving became possible and short-range electric cars became curios.

Having left London alongside the Runabout in today’s French equivalent, I have to say: “Plus ça change.” The “range” readout on the Zoe’s dash said 73 miles as we crossed Westminster Bridge. The Zoe is fabulously smooth and quiet — at up to 18mph it generates a soft siren sound to warn pedestrians of its approach. Apart from that there’s very little in the modern electric car that Michael Faraday wouldn’t recognise, and not much in the battery that would surprise Alessandro Volta, the 18th-century maker of the first battery.

The Runabout alongside me was driven by its owner, Austrian Albert Fellner, who paid £55,200 for it at Bonhams last year. Under the seat were four massive 12-volt bus batteries, which began to flag as the miles rolled by. On the outskirts of Redhill, in Surrey, Fellner came to a halt and summoned a van with replacements. In the Zoe I’d had the headlights on, the heater blowing and the sat nav working, and it said I still had 55 miles in the tank. 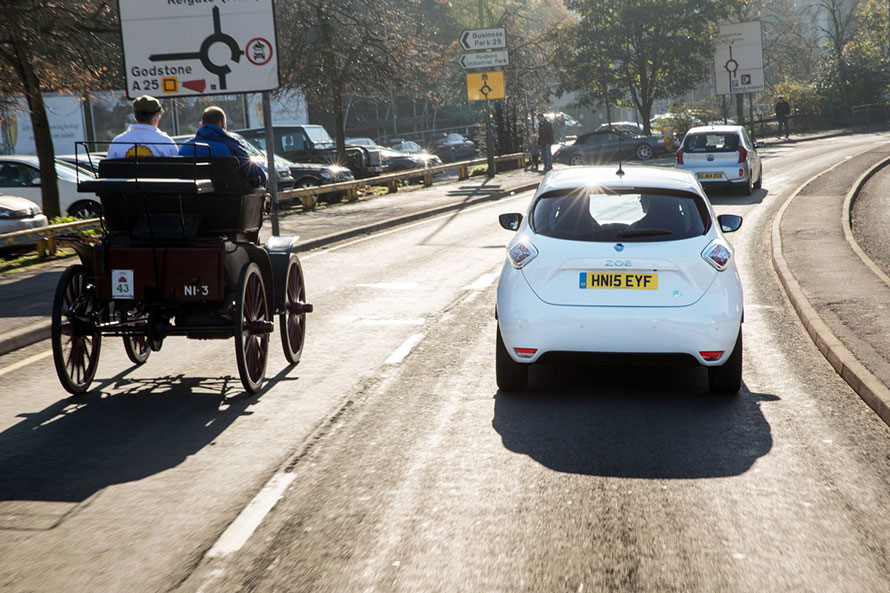 After Fellner’s mechanics had swapped the batteries, I mounted the Runabout’s driving bench with one of them, Bruno Niederer, and hit the road. I was astonished at how good the car was. The average horse-and-carriage driver could be taught to drive it in five minutes flat. It has an “on” switch, a go-faster pedal, a tiller and a brake lever. There are probably more controls on a horse. I’d expected everything to be clunky — far from it. The long tiller makes steering super-sensitive, so overcontrolling is a problem until you get the hang of it.

The accelerator pedal is ergonomically inadequate, and I’d advise the Cleveland Machine Screw Company to change it on the next model. It must be moved forward before it can be pushed down, so you can’t just pivot your foot about your heel, and your getaway tends to be jerky. The brakes grip strongly, calling for a light touch on the lever, and the power train makes proper car noises — albeit muted.

Progress is remarkably smooth, although the wooden front wheels feed every tarmac anomaly back along the tiller and make steering finesse challenging. There’s no engine braking; the contraption will bolt downhill unless you rein it in with the brake and anything above 20mph feels supersonically dangerous.

As with the Zoe, husbanding your electrons is key. Pressing the accelerator just to the point at which the Runabout cruises draws about 30 amps; flooring it draws more than 90 amps without any increase in performance, so careful footwork is called for. Of course there are no instruments. There’s no roof either, so the fog gets in, but for all that, driving the Runabout was the most engaging, joyful experience I’ve had in a car since I was 17. Sadly at Crawley, in West Sussex, I had to get out to give someone else a go, and I gazed wistfully after it as it went.

Then it was back into the Zoe. Don’t get me wrong, there’s nothing wrong with the car if you want to go shopping and suchlike. Like the Runabout, it’s dead simple to drive. You can charge it up at home in three or four hours, or get an 80% top-up in as little as an hour — or 30 minutes in the case of some rapid chargers — from a public charging point. But in real terms, it won’t go far, it won’t stir your soul and it’s not cheap. The Zoe costs £25,545 for the top-spec model, but you can get a £5,000 plug-in grant for it.

Unless manufacturers get serious, mainstream electric cars will have the same success in the 21st century as they did in the previous one. What happened to the dream of Back to the Future? By now we should be driving DeLoreans powered by 1.21 gigawatts of electricity from portable “Mr Fusion” reactors. Tesla is the most forward thinking of today’s manufacturers with its Model S — a vehicle that can drive far enough on a single charge to make it a practical proposition. Considering that the company was founded only 12 years ago, it is shaming many other car makers with the speed of its progress.

Now the government needs to show support by building a serious network of power stations. Is there any sign of that happening? Ask the Chinese.