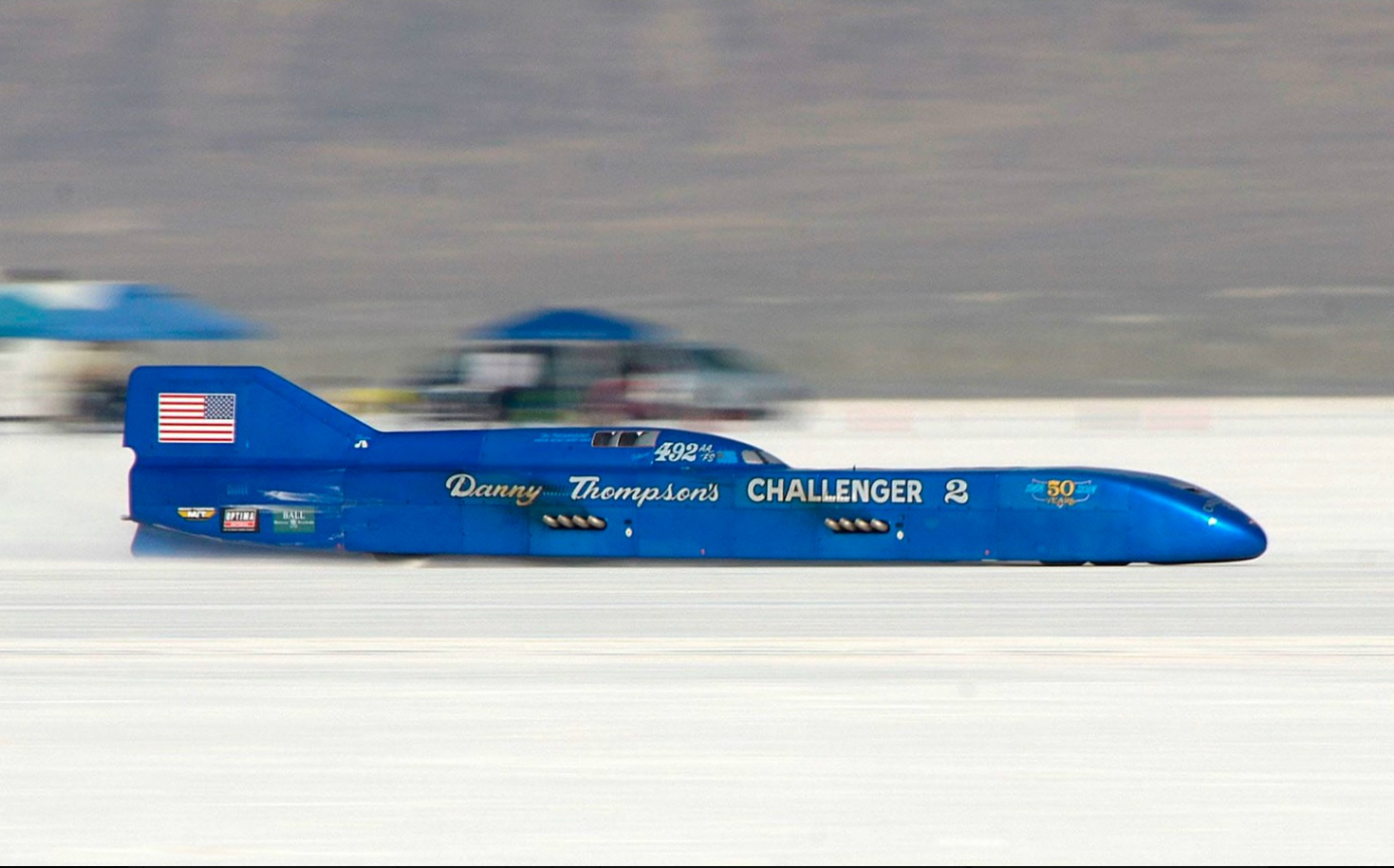 A TRUE legend of the motoring world could soon be yours after Challenger 2, the world’s fastest piston-engined car, was put up for auction.

Challenger 2 will be by some margin the fastest car at the upcoming Mecum Auctions sale in Kissimmee, Florida, in January. The arrow-like machine entered the record books on August 12, 2018 after roaring across the Bonneville salt flats at a two-way average speed of 448.757mph, with Danny Thompson — then 69 years old — at the wheel.

While Thompson’s speed wasn’t even close to the outright highest speed achieved by a car of 763.035mph, set in 1997 by Wing Commander Andy Green in the Thrust SSC jet car, Challenger 2 was notable as the fastest ever by a vehicle with an internal combustion engine.

Though the technology at the heart of Challenger 2 isn’t too far removed from what’s under the bonnet of most vehicles currently on the road, its performance goes way beyond that of any production cars. Underneath Challenger 2’s streamlined cobalt bodywork are a pair of 8.2-litre racing V8 engines that, when fed with the sort of nitromethane fuel used in professional drag racing, have a claimed combined power output of around 4,932bhp.

As remarkable as the record-breaking run is, it’s the backstory behind the land speed record project that makes the accomplishment truly special. In 1968, a team led by Danny Thompson’s late racing driver father Mickey Thompson built the Challenger 2 car, with the aim of setting a new land speed record at Bonneville.

Thompson senior never got the chance to enter the record books in his car, however. The original attempt in 1968 was called off after a downpour flooded the salt flats, and real tragedy struck 20 years later when Mickey Thompson and his wife were murdered.

After fulfilling his father’s dream last year, Danny Thompson said: ” In 1968, my dad, the mad scientists at Kar Kraft, and an elite group of Southern California gearheads created a vehicle that they believed had the potential to become the world’s fastest hot rod. It took five decades, a lot of elbow grease, and a few modifications, but I feel like I’ve finally been able to fulfil their dream, as well as my own.”

While it wasn’t revealed why Challenger 2 is being sent to auction, it’s likely due to the considerable costs involved in financing a land speed record attempt. In a follow-up statement released on September 5, 2018, Thompson revealed: “Our sponsors have been incredible, but like a lot of racers, a significant portion of this came out of my own pocket, and not in a way that was sustainable. A huge thank you to my wife Valerie for tolerating that.”

As land speed record cars don’t tend to go under the hammer very often, Mecum perhaps unsurprisingly hasn’t said for how much it expects Challenger 2 to change hands. The only real precedent is the sale of the jet-powered Thrust2 which set an outright land speed record of 633.468mph in 1983: the record-breaking machine was sold under tender in 1991 for £90,000, before moving into its current home alongside ThrustSSC at the Coventry Transport Museum.

Another land speed record car is expected to headlines in the next 12 to 18 months. Following a successful testing programme that saw the British-built Bloodhound LSR reach speeds of up to 628mph, the team behind the jet- and rocket-powered machine aim to set a land speed record in 2020. If they succeed, and sponsors give them the green light, Andy Green will attempt to take the car beyond 1,000mph.