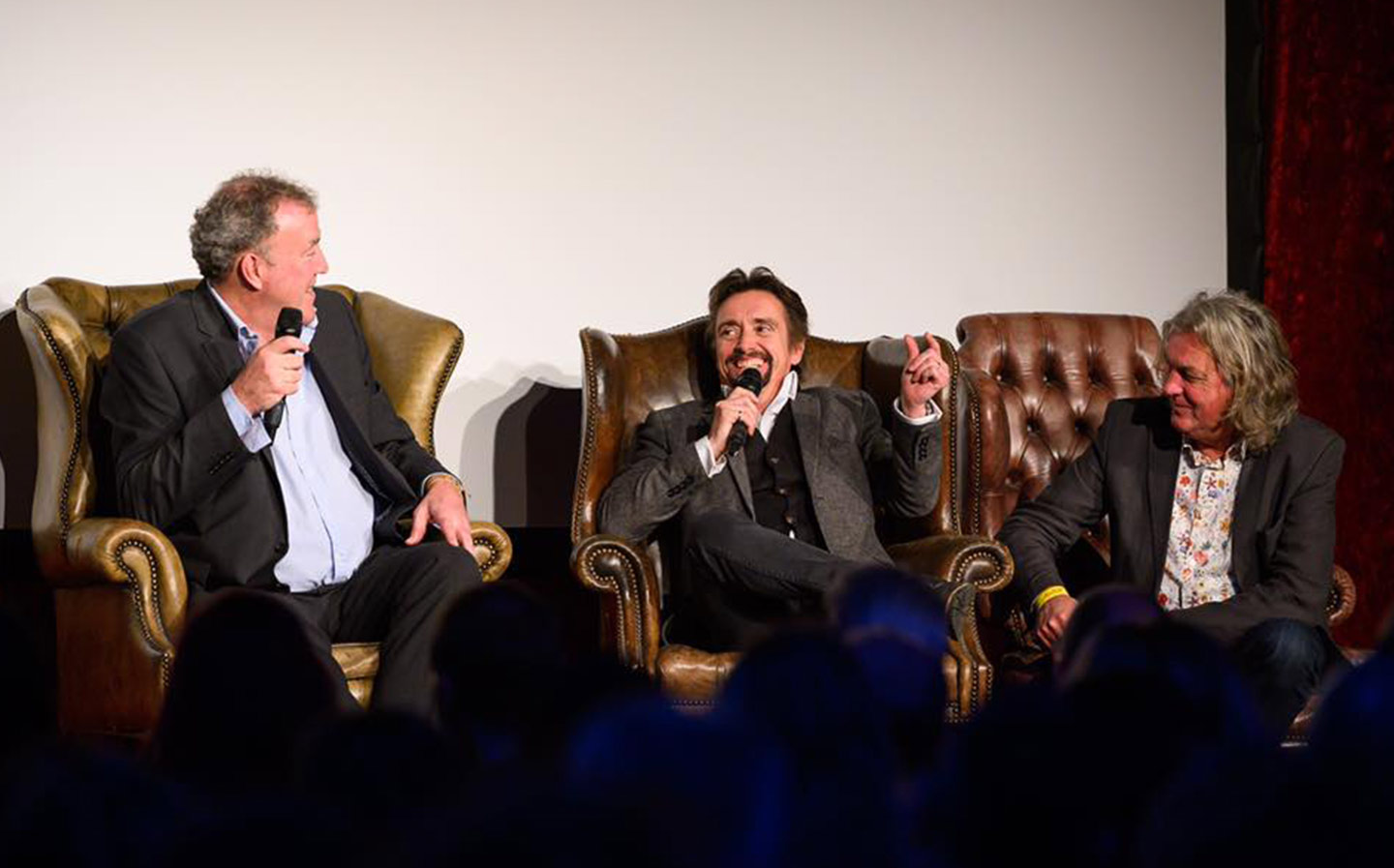 THE NEW series of The Grand Tour was launched to media and VIPs last night in London, ahead of the release of episode one on Amazon Prime Video later this week.

Part of the event involved a Q&A with presenters Jeremy Clarkson, James May and Richard Hammond, which  of course was as hilarious as it was insightful. Here’s what we discovered.

The Grand Tour team had a ball in Detroit, according to Clarkson. He said it’s so deserted these days that it’s like driving from east to west London and not seeing a single occupied building, “Which is like Birmingham”. He added that you can have a drag race and not a single person will come over to watch. “We had a truly great time there,” he concluded, “…and nobody was murdered.”

Unlike in series two, when he spectacular smashed up a Rimac electric hypercar (and his knee), Richard Hammond managed to avoid near-death experiences while filming the third series. That’s despite being given a “super-fast electric car” (details TBC) to play with again. Hammond also famously ended up in hospital following a jet car crash while filming Top Gear, in 2006. “It’s a shame, I broke an otherwise perfect record,” he said.

3 Clarkson did injure himself

Clarkson revealed that he cut his finger in a bizarre incident in Georgia: he was trying to knock the beak off a porcelain duck with a hammer, apparently. He told the audience last night that there was “arterial blood gouting all over a car park.” His co-hosts seemed less concerned, with Hammond saying: “It’s a shame you didn’t, as you claimed you had, cut it off. Because then we could have thrown the rest of you away.”

4 James May is not good at promoting the show

When asked what he got up to during the Colombia special, James May replied: “Driving about. We started at the top of Colombia, we went down to the bottom, we did some photography of animals, sort of. And we drove on some rough roads. And I had a Fiat Panda 4×4, which was excellent, and the exhaust fell off. Hammond crapped himself…”

At this point he was interrupted by Clarkson: “You’re not really selling this,” he said, with Hammond adding: “That is the driest trail I’ve ever heard.”

“We did a whole half hour show, and talked non-stop, and didn’t once mention cocaine,” Clarkson said. “The Colombians were thrilled.”

…very hot. While filming in Chongqing, the temperature reached 48 degrees centigrade, apparently. They knew exactly what impact this can have on a person because the air conditioning in James May’s Mercedes broke down. There was visible joy from Hammond and Clarkson when they realised what had happened.  “You’ve never seen a happier face,” Hammond said.

A special show set in Mongolia involved the trio being dumped in the middle of nowhere, told to build their own car, and then drive to civilisation, which took six days. “We saw not a road, a person, a farm animal, a wall, a jet contrail or any evidence that man has ever existed,” Clarkson said, before Hammond interjected: “Or an off licence.”

“No, the producers provided no alcohol at all for this trip,” Clarkson said.

8 Sharing the car in Mongolia was not pleasant

When asked what was his least favourite moment of season three, he said: “Probably being in the car with you two. This is something that’s maybe happened four or five times in our whole careers together, that we’ve all been in the same car, and we were all in the same car in Mongolia, and that was sh*t.”

Clarkson pinpointed the very worst moment from the journey: the realisation that there was no booze.

Clarkson watched and made tea while Hammond and May built their car in Mongolia.

Clarkson said he’s more proud of the final episode, in which they look back at the Ford Mondeo, Sierra and Cortina, than anything he’s done in all the years he’s worked with Hammond and May. “I would hope that, 13 weeks from now, when you watch the final programme go out in season three, you’ll agree that that is actually the best.”

11 There are some… weird format changes

When asked about what’s new in season three, in terms of format, Clarkson, Hammond and May listed a number of odd updates. The whole thing is in song form, they said, and the presenters are completely naked throughout. “It’s a nude musical review; let’s get it out there,” Hammond joked. At least, we hope it was a joke.

12 Clarkson still holds a grudge against his former employer

13 There are (almost) no celebrity guests

The show is now an international sensation, and that means some ‘celebrities’ aren’t quite as well-known as you might think outside the UK. “We’re much better known in Italy and China than we are here (England), weirdly,” Clarkson said, “so there’s no point in having a guest when you go, ‘Ladies and gentlemen, it’s Howard from the Halifax advert,’ because in Uruguay they haven’t got a f***ing clue who Howard is.”

However, there will be a few cameos here and there… from whom wasn’t revealed.

As already reported, although season three marks the end of studio-based car shows for Clarkson Hammond and May, Amazon has signed the trio for more series of The Grand Tour. “We love Amazon and they seem to love us, so consequently you’ve got us for a few more years yet,” Clarkson said.

As soon as the audience at last night’s launch were asked if they had any questions, Clarkson immediately declared, “Lexus LFA. Saves me answering what my favourite car is, because I’ve answered that question 800 f-ing times.”

Clarkson then pre-answered another potentially question: “Eight inches on the soft.” TMI, Jeremy.

“I got a Cullinan the other day, and it broke down after five minutes,” he said, adding: “Ugly and unreliable.” He also isn’t a fan of the design of Aston Martin’s new SUV, either: “It looks awful.”

17 Clarkson revealed his worst car ever

Well, actually he’s written about the FSO Polonez before, saying: “You cannot begin to imagine how bad the ride was on this truly awful car, and just as you were marvelling at its ability to bounce so high off the ground, you’d find its steering didn’t really work because the front wheels had been concreted on.”

But last night Clarkson regaled a story about testing the Polonez with fellow presenter Quentin Willson while filming old, old Top Gear: “We were driving along and it caught fire, so I jumped out and said, ‘What shall we do? Call FSO? Call the fire brigade?’, and he just went, ‘No, let the bastard burn.’” Apparently the pair were in agreement on the verdict.

Meanwhile, James May wants to “hunt down and execute” the person responsible for the Citroën Pluriel.

18 They shaved an audience member’s head in season one

One member of the audience last night asked Clarkson, Hammond and May if they had shaved anyone’s head in season three. Clarkson had to explain that they had the idea to ask people questions and reward correct answers with money, but wrong answers meant having your head shaved.

Sadly for the victim(s), who it turned out was the person asking the question, the segment never made the show. “We decided the item didn’t work, so we never put it on television,” Clarkson said. “It just looked like bullying.”

The Grand Tour Season three is released on Amazon Prime Video at midnight tomorrow night, and the Grand Tour game is available to download for PS4 and Xbox one now at Amazon.co.uk

The Grand Tour quiz: are you a Clarkson, Hammond and May super fan?