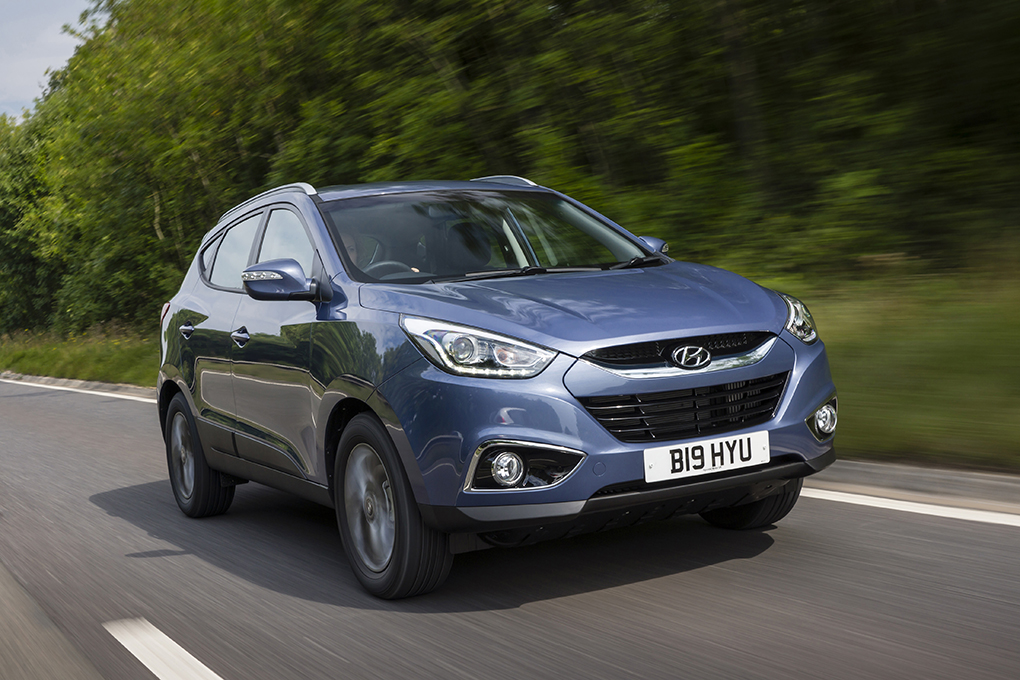 What is the Hyundai iX35?

The iX35 represents the new generation of Hyundai cars that have banished cruel jokes about the company’s cars (don’t ask Jeremy Clarkson about Koreans and dogs, for example). It costs from £17,000 and has been available since late 2010, although a recent facelift (at the end of 2013) has helped its cause in the face of younger, fitter competition like the new Ford Kuga and Nissan Qashqai.

Search for and buy a used Hyundai iX35 on driving.co.uk

There are five trim levels to choose between, starting with the standard S, and spanning SE, SE Nav, Premium and the flagship Premium Panoramic. For a happy medium, the standard specification of the SE nav should suit most drivers’ requirements. For a £1,000 premium over SE, it adds satellite navigation with a live traffic feed, rear-view parking camera and an upgraded seven-speaker audio system.

As for the engines, there is a choice of one petrol engine, a 1.6-litre, and two diesel motors, of 1.7- and 2-litre capacity. The most frugal of all is the  1.7-litre CRDi, which returns up to 54.3mpg in Blue Drive specification. Only the 2-litre comes with four-wheel drive and the option of a six-speed automatic gearbox. So if you wanted an iX35 for tackling the worst of the winter weather in a remote part of the country, you’ll need to spend over £23,000 to get four-wheel drive.

A practical consideration which plays in the iX35’s favour is that new Hyundai cars come with a five-year warranty and no mileage restriction during that period, plus five years of breakdown cover.

Driving tested the 2-litre CRDi  with four-wheel drive and the six-speed automatic transmission. This means it featured hill descent control – which helps manage vehicle during the descent of a steep slope off-road – and a central differential lock, allowing the driver to have an equal amount of the engine’s power sent to the front and rear axles. The latter can be useful when driving on a particularly slippery surface or in boggy terrain.

All of which means that Hyundai has given the iX35 a bit more prowess when it comes to venturing off-road – even if few owners are unlikely to want to do any more than tow a trailer or caravan. 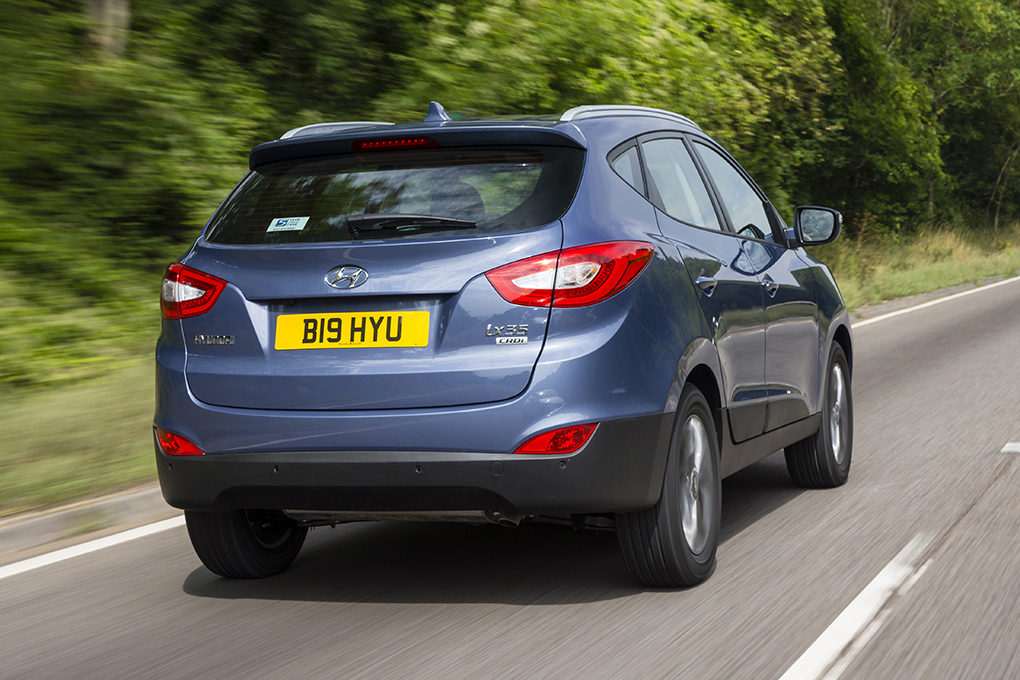 The 2-litre CRDi engine is nothing to write home about. For starters, it’s noisy, and an ever-present rattle means there’s no danger of mistaking it for a petrol motor, and when you accelerate hard the volume of moving mechanical parts only increases.

This might be acceptable if the performance or fuel economy were impressive, but they’re disappointing. Hyundai claims the 2-litre returns 40mpg on the combined cycle – less than rival cars – but we couldn’t manage much more than 33mpg on our test route.

To make matters worse, the automatic transmission is jerky and far from smooth, and when the driver wishes to take control and make manual gearshifts, this can only be done using the gearlever.

At this point it would be good to report that the rest of the driving experience makes up for the lacklustre engine and gearbox. Unfortunately, the iX35 trails behind the competition in most areas. The steering wheel sits at an odd angle and gives no feel of what the front tyres are doing, yet the nose will understeer only too quickly when faced with some spirited cornering. Add to the mix a suspension that delivers a lumpy, bumpy ride and it would seem that the recent mechanical changes made to the iX35 at the time of its facelift did not go far enough.

On the outside, the iX35 has slightly awkward proportions that resemble a porpoise on wheels.  Inside, the cabin looks a little dated compared with the latest models in the SUV class, notably the Nissan Qashqai and Mazda CX-5, and the quality of the materials feels downmarket.

That said, it’s a practical family car. The front seats are a little flat but comfortable and offer the raised driving position so beloved of the crossover crew, but the steering wheel is tilted at an uncomfortable angle which can’t be solved by adjustment of the steering column. The back seat will accommodate two adults in comfort, or three children with a little bit of a squeeze. And the boot offers a generous 465-litre capacity – even with a full-size spare wheel under the floor – but when the rear seats are folded flat they create a ridge.

Neat touches include an intuitive infotainment display with touchscreen control and voice control. And practical touches are plentiful: front door bins with recesses for 1-litre drinks bottles, a pair of cup holders by the handbrake and two 12-volt plug sockets in the facia. There’s even a large stowage bin beneath the central armrest. 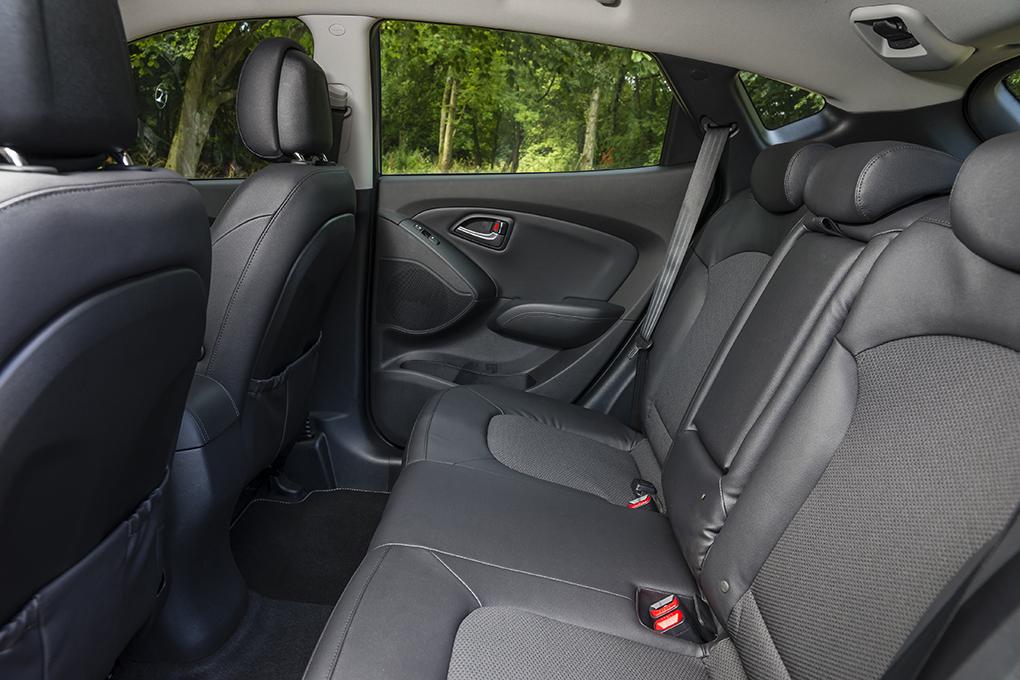 What to look out for buying a used Hyundai iX35

The model that delivers the most for the money when buying a used iX35 is a 2011 1.7CRDi 2WD, in Premium trim. Regardless of which used iX35 you’re buying, the first thing to check is that the vehicle has a full service history. Without it, the car’s original five year warranty will be invalid.

There have been no recalls since the iX35 was launched and the majority of customers are delighted with their cars, but there have been some grumbles from owners who have had problems engaging first and second gear with the manual transmission. It seems to be a problem with a small batch of cars and some have already been resolved by the dealer network under warranty.

The vast majority of owners seem happy with their dealers, which suggests that most faults are remedied without much drama. If you’re looking for an iX35 with four-wheel drive, though, we’d always recommend checking for signs of tow damage on the rear bumper.