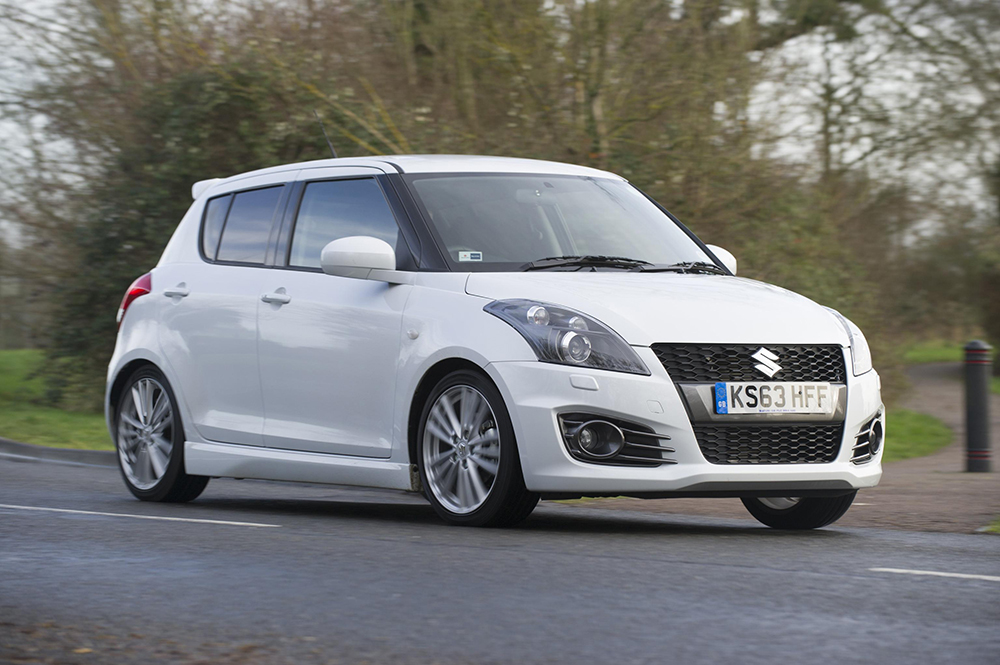 WHENEVER I pop into the newsagent’s to buy a paper, I am easily able to leave again without stealing a chocolate bar. It simply doesn’t enter my head to break the law.

Likewise I have never murdered anyone in a meeting. It’s crossed my mind, of course — I work for the BBC — but not once have I actually picked up one of the Fairtrade, nuclear-free peace pencils and plunged it into the chairman’s eye socket.

I suppose that I must have broken a law at some stage in my adult life, but sitting here now I simply cannot think what it may have been. I’ve never stolen anything, though the temptation is strong at those useless Tesco self-service checkouts. I’ve never mugged or pickpocketed or stabbed anyone. I’m basically Jesus, except — unlike him — I’ve never even knocked over a moneylender’s table.

Almost everyone reading this article will be in the same boat. Squeaky, Daz’n’Omo whiter than white. Until you get behind the wheel of a car. Then you break the law absolutely all the time.

I’ve never mugged or pickpocketed or stabbed anyone. I’m basically Jesus, except ‒ unlike him ‒ I’ve never even knocked over a moneylender’s table

You speed as a matter of course — oh yes you do. You gamble on amber and sometimes get it a bit wrong, you make illegal right turns when you think no one is looking, you park on yellow lines, you use your mobile phone occasionally and can you honestly put your hand on your heart and say that you have never driven when you think you could be a bit over the limit from the night before?

Jack Straw is a decent man. An honourable man. A law-abiding man. But he was photographed recently, sitting in his car on the motorway, eating a banana. He knows that this could put him on the wrong side of the law and yet he obviously thought, “Phooey. I don’t care.” So why when he’s walking past a church collection tin doesn’t he think, “I’ll have that”?

I believe I have the answer. It’s because almost all the laws of the land are sensible. They simply tell us not to do what we had no intention of doing anyway. Not murdering, not stealing and not coveting our neighbour’s ox are what separate human beings from the animals.

But all the rules of the road are rubbish. Straw knows when he is sitting in a traffic jam on the M6 that no harm will come to anyone if he eats a banana. I know that when I’m at that junction by the BBC in west London, if I do a right turn from Wood Lane onto the Westway, it will inconvenience not a soul. You know that if you do 85mph on the motorway, all will be well.

Killing an elephant for its tusks is bad and wrong. Pulling up on a yellow line and nipping into the shop for some milk isn’t.

Drinking? Well, we all know that it’s extremely unwise to drive a car when we can’t say “Peter Piper picked”, let alone the rest of it, but the morning after a few glasses of wine, when we feel completely normal? It’s difficult to accept that our reactions might be a bit off. They probably aren’t.

I sometimes wonder what would happen if all the country’s motoring rules were scrapped. My guess is: nothing at all.

There are those who say that rigorously enforcing speed limits saves lives, but anyone with an ounce of common sense knows that’s simply untrue. Better road design and improved occupant protection in cars are why the fatality figures keep dropping. So would we all do a million if there were no speed limits? I doubt it. And certainly not with petrol at £400 a litre.

Killing an elephant for its tusks is bad and wrong. Pulling up on a yellow line and nipping into the shop for some milk isn’t

Would we all drive drunk? No, because we realise it’s silly. Would we all jump red lights and go the wrong way round roundabouts and park in the middle of junctions? No, again. Common sense would stop us doing any of that.

It’d be anarchy out there, and I mean that in the old sense of the word: a perfect state where no government is needed. In fact the only rule I’d keep is the yellow box. Because that makes sense. In fact I’d increase the punishment for stopping on one from a penalty charge to death by sniper fire.

Anyway, I’ll let you chew on that while we move on to the road test — the really rather marvellous Suzuki Swift Sport.

There’s a tendency today to make hot hatchbacks extremely fast and large and gaudy. But all of that rather misses the point. A hot hatchback should be a normal hatchback with just a little bit of spiciness sprinkled into the mix. That’s what you got with the originals: the Volkswagen Golfs and the Peugeot 205s and the Ford Escorts. And it’s what you get with the Swift Sport.

The 1.6-litre engine has not been fitted with a turbo or supercharged with electricity. It’s simply been given high- lift camshafts — I’m drooling — so that you end up with a revvy 134bhp. “Pah,” the armchair enthusiasts will say. “My Magimix has more grunt than that.”

Yes, but because the Swift is so light — it weighs just 1,045kg — you end up with 128bhp per ton. Which is almost what you used to get from the Peugeot 205 GTI. And that car was a legend. 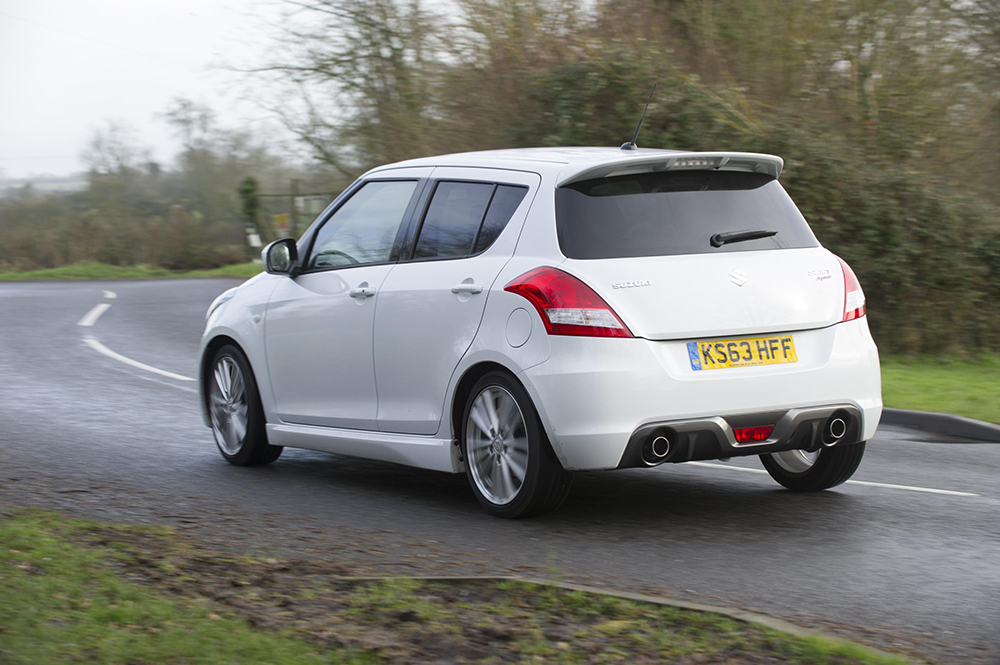 It’s not fast, not if you compare it with a Golf R or a Mercedes A 45 AMG, but it is fun. It handles beautifully and has a puppy-dog enthusiasm when you’re in the mood. Critically, however, it becomes just a normal small hatch when you aren’t. So, as standard you get features such as climate control, Bluetooth connectivity and so on.

There are various extras too that can be fitted either by you at home or by a dealer. I’m a bit confused by this because the cost of, say, a silver-finish trim for the dashboard is £75.97 or, if you buy the pieces and fit them yourself, £56.17. So you save £19.80 but end up with two broken fingers and a dash that’s all wonky. And covered in blood.

This brings us on to the question of quality. The Swift feels Japanese. There’s an Oriental sharpness to the brakes and a sense that all the equipment will work perfectly for seven years precisely. And then not work at all. But the Swift isn’t Japanese. It’s built in Hungary, mainly for the Indian market, by a company that’s part German.

It’s a market forces car, then. A beancounter special. And usually that’s a recipe for disaster. But somewhere along the line someone who really knows about cars was able to inject a bit of magic into the mix. And what we’ve ended up with is a fun car that is available with three or five doors for £13,999 and £14,499 respectively. That is very good value. 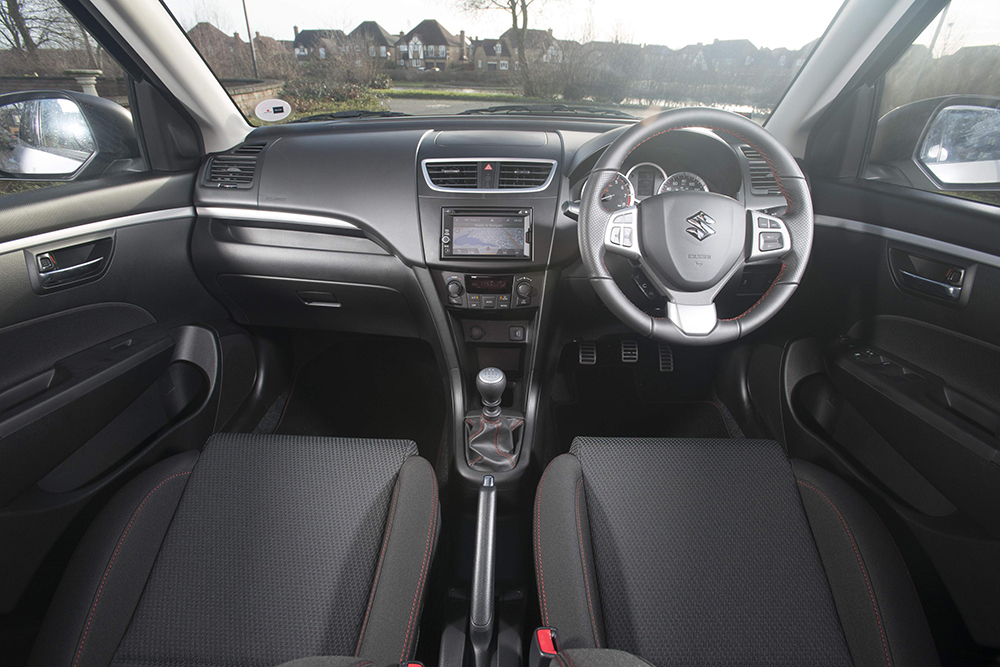 It even comes with space in the back for children. I know this because I had to give Richard Hammond a lift and he didn’t moan once about being cramped.

As you can probably tell, I liked this car a lot. After the more expensive Fiesta ST it’s the best old-school hot hatch there is. But you won’t buy one because it’s a Suzuki and that sounds a bit downmarket. This means you’re daft. And that, I suppose, is why you are required to drive with both hands on the wheel, at 30mph, while not eating a banana or talking on the telephone.

The best horse ever designed by committee