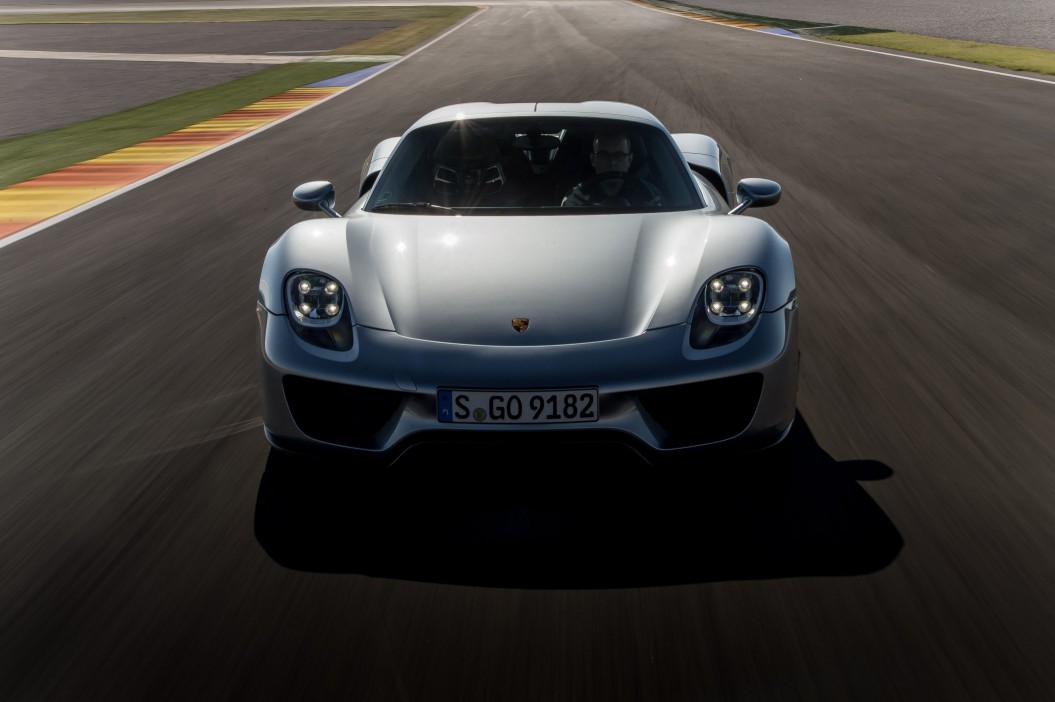 THIS WEEKEND several thousand British men will have slipped into their Gulf-livery leather jackets and, imagining they look a bit like Steve McQueen — apart from the stomach and the beard and the face — set off in their Morgans and their MG MGBs for the Le Mans 24-hour race in northern France.

Many will have completely overdone it before the race began and this morning, having spent a bewildering night watching the occasional set of headlights tear by, will be stumbling about in a tent full of their own sick, wondering why on earth they didn’t pack any Nurofen.

I don’t get Le Mans as a spectator sport. Almost no one has heard of any of the drivers. The cars all look the same. No one has the first clue who’s winning and no one could care less. The noise is horrendous, camping is for the weak and beer that’s been in the sun all day is never going to taste very good. Plus, as it’s an 8½-mile circuit and it’s a test of endurance rather than out-and-out speed, the chances of you seeing an accident are virtually zero.

Search for and buy used Porsche on driving.co.uk

On the other side of the pit wall things are rather different. I once took part in a 24-hour race and I thought it was extremely thrilling. I did know who was winning, and out on the track I had to balance the overwhelming need to catch them up with a need to make the tyres last as long as possible. This, then, is a sport where the watching doesn’t matter. It’s all about taking part.

And at Le Mans the participant that has had more success than any other is Porsche. It has had 16 outright victories, and 103 class victories. And this year, after a 16-year absence from the main LMP1 race category, the company is back with a new driver you have heard of — the former Red Bull Formula One man Mark Webber — and a new car: the 919.

Supposedly this is a road-going version of the Le Mans racer, but it’s no such thing. Both cars are testbeds for new battery technology in the same way as James Dyson’s next vacuum cleaner and the Large Hadron Collider are both tools that push the boundaries of what’s possible with volts.

It’s a hybrid, and, no, I’m not going to laugh. Because while I am yet to be convinced that hybrid technology does much for the future of the planet’s limited resources, I will happily agree that as a tool for making a car go faster it is absolutely brilliant.

Which brings me on to the Porsche 918. Supposedly this is a road-going version of the Le Mans racer, but it’s no such thing. Both cars are testbeds for new battery technology in the same way as James Dyson’s next vacuum cleaner and the Large Hadron Collider are both tools that push the boundaries of what’s possible with volts. 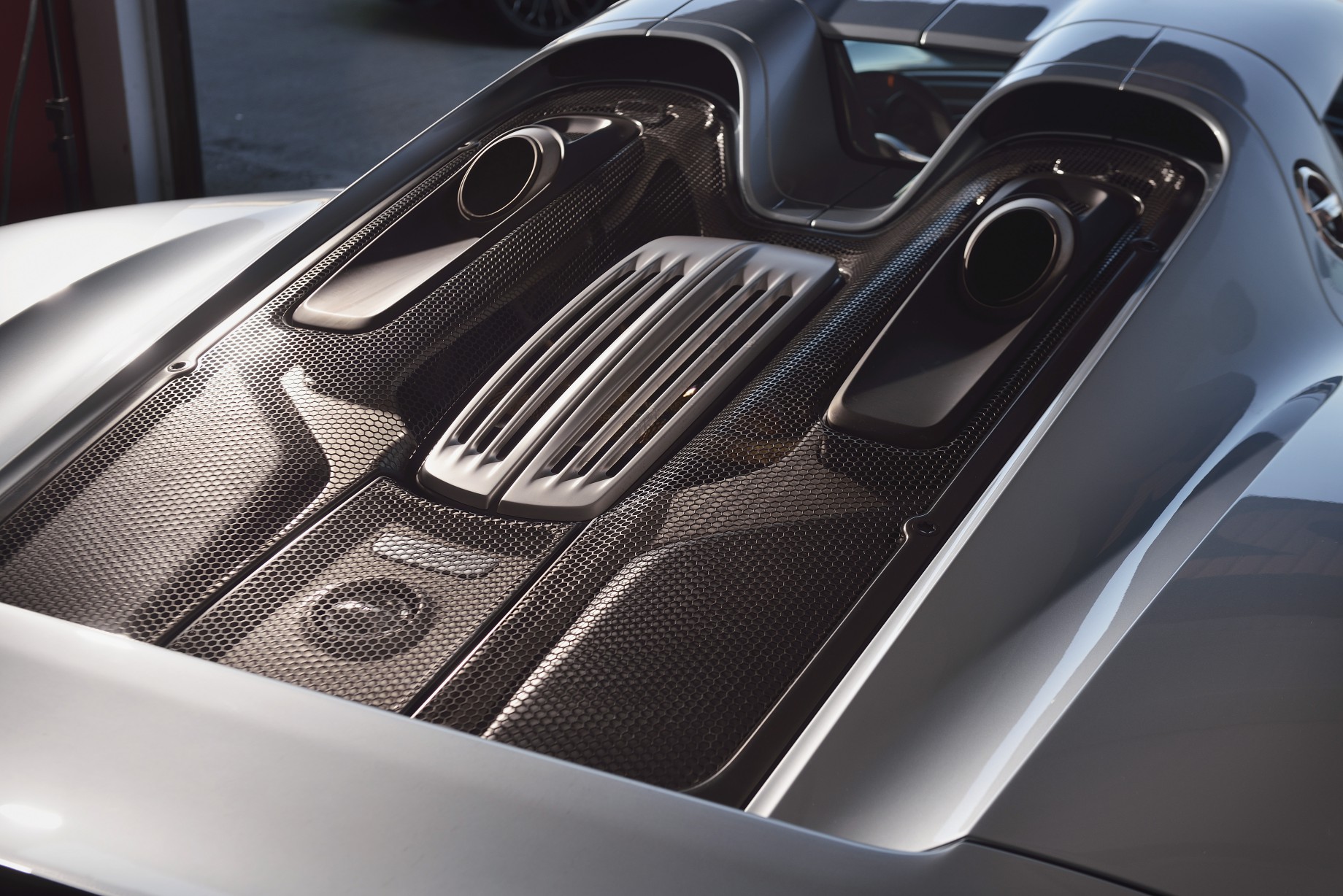 The racer, for example, has a 2-litre four-cylinder petrol engine. The road car has a 4.6-litre V8. And sat nav. And air-conditioning. And electric windows. And carpets. And a removable roof.

And that’s the key to the Porsche 918 Spyder. It is not a road-going racing car. It is not a stripped-out, hunkering-down, fire-spitting monster. It is built to be used every day, everywhere, by everyone. Even though none of the 918 people who’ll buy one will have the first clue how it actually works.

Oooh, there’s a lot of tech in this thing. Batteries, as we know from our phones and our laptops, lose their potency as the weeks and the charge cycles slide by. And Porsche has had to address that, not just for the five hours a year when the car’s being used, but for the 8,700-plus hours when it isn’t. It says that as a result of its endeavours the battery pack will last seven years.

And then there’s the complexity of making the enormous V8 work in tandem with the electric motors, using the silent drive to fill in the holes when the screaming V8 is not at its best. And to send power to the front wheels when they need it. And to work out what sort of power they need. 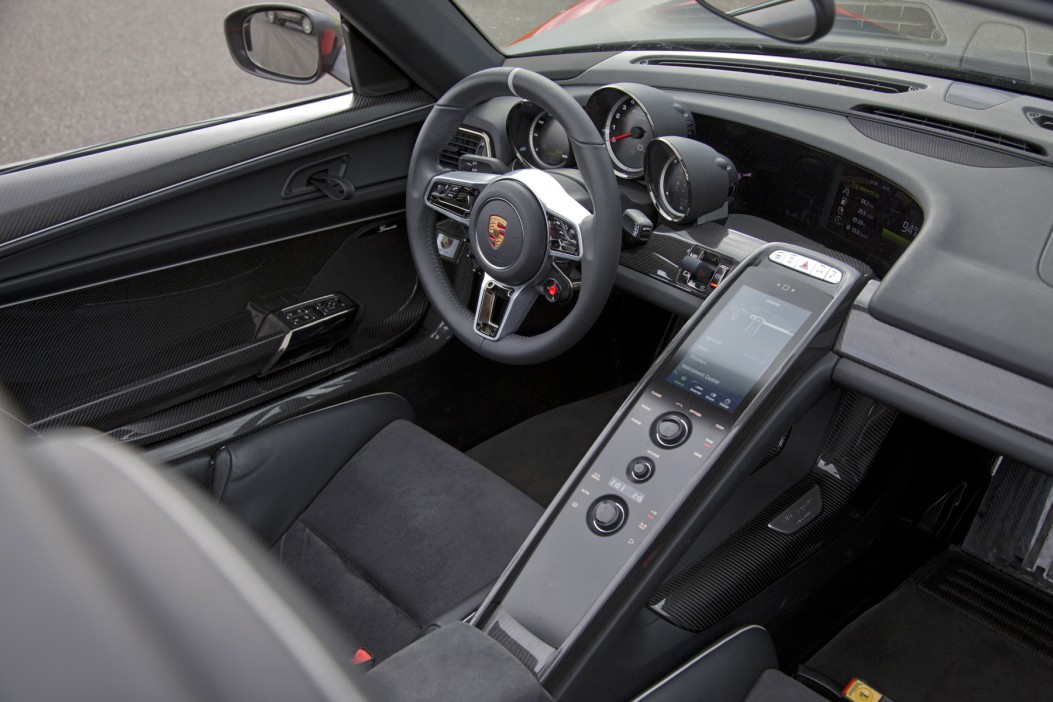 All of the information is available to the driver on four screens. But I can pretty much guarantee you won’t be looking at any of them when you’re behind the wheel, because while fuel efficiency is a by-product of all this cleverness, the actual point is speed. Mesmerising, jaw-slackening, eye-widening, bowel-loosening speed. Neurologically impossible-to-compute speed. Laugh-out-loud speed.

I began in electric, or E-Power, mode, which delivers about the same amount of power as you get in a hot hatchback. But because the 918 weighs about 1½ tons — and the Weissach-package model I was driving was even lighter than that — and because electric power is delivered in one big lump, instantly, I was doing 62mph just 6.1 seconds after I set off.

Silently? No, actually. As the speed builds, the 918’s motors sound like a jet engine on idle. They whistle. And as you go faster still, they start to shriek. It’s a noise quite unlike anything I’ve heard in a car before and it is fabulous. If this is the future, count me in.

And then — for a complicated scientific reason — the whole back of the car exploded. Well, that’s what it sounded like. Maybe I was getting close to the end of the battery’s 18-mile range and it needed a charge. Or maybe the car somehow knew that it was on a track and that I really wanted some V8 propulsion as well. Whatever, the petrol engine had burst into life. 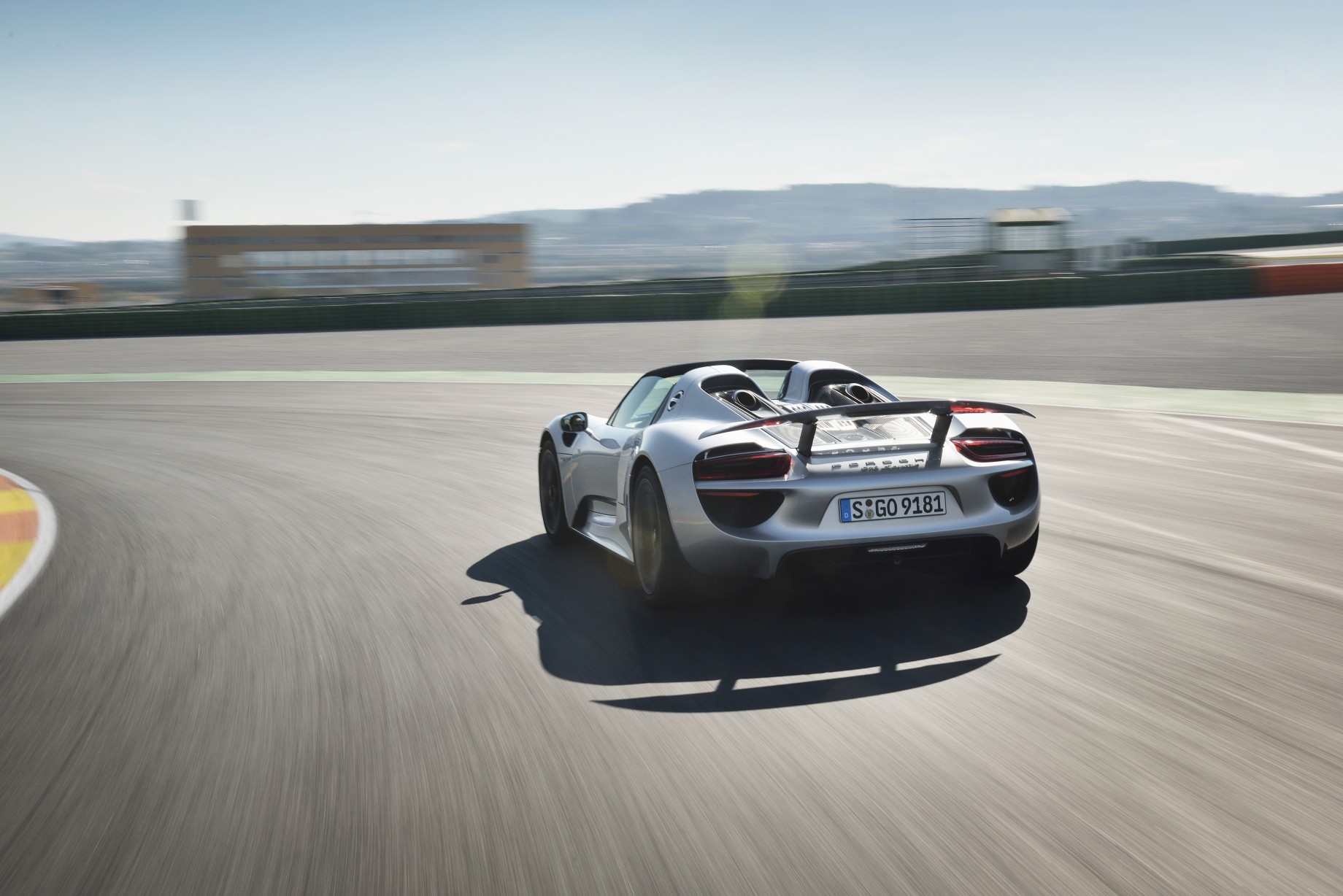 In many hybrids you cannot tell when this happens because the engine is small and weedy, like a mouse. You can in the Porsche, partly because of the volcanic noise but also because you are now doing about a million miles an hour. At this point I turned the knob to Sport Hybrid mode and heard the sonic boom. And then I went for the full-fat Race Hybrid setting and it felt as though I were slingshotting round the moon.

It would be handy at this point if I said I’d never experienced speed like this before in a car . . . but, of course, I have. Because I’ve driven the McLaren P1. Indeed, after doing so, I went on the television and said that if the Porsche turned out to be faster round the Top Gear test track, I would change my name to Jennifer.

I’ve driven the McLaren P1. Indeed, after doing so, I went on the television and said that if the Porsche turned out to be faster round the Top Gear test track, I would change my name to Jennifer.

That test has not happened yet, but I’m going to be honest and say I’m a bit nervous. McLaren says its car has lapped the Nürburgring in less than seven minutes but won’t give an actual time. Porsche will. With the lightweight Weissach package its 918 did a lap in 6 minutes and 57 seconds. Fourteen seconds faster at the time than the previous lap record for a road-legal car.

These are numbers. All I can go on is feel, and in a straight line I think the McLaren is more electrifying. Its throttle really does feel like a hyperspace button. It’s savage and frightening. The Porsche is fast, make no mistake, but it doesn’t have that “Oh no, I’ve trodden on a bomb” moment.

However, round the corners it’s a different story. The McLaren’s grip comes from clever management of air. It’s downforce that gives you the grip and you can’t really feel that. You have to put your trust in something you can’t see. You have to say, as you reach a corner, “I must go through here quickly or I will crash.” And that takes bottle that I lack. 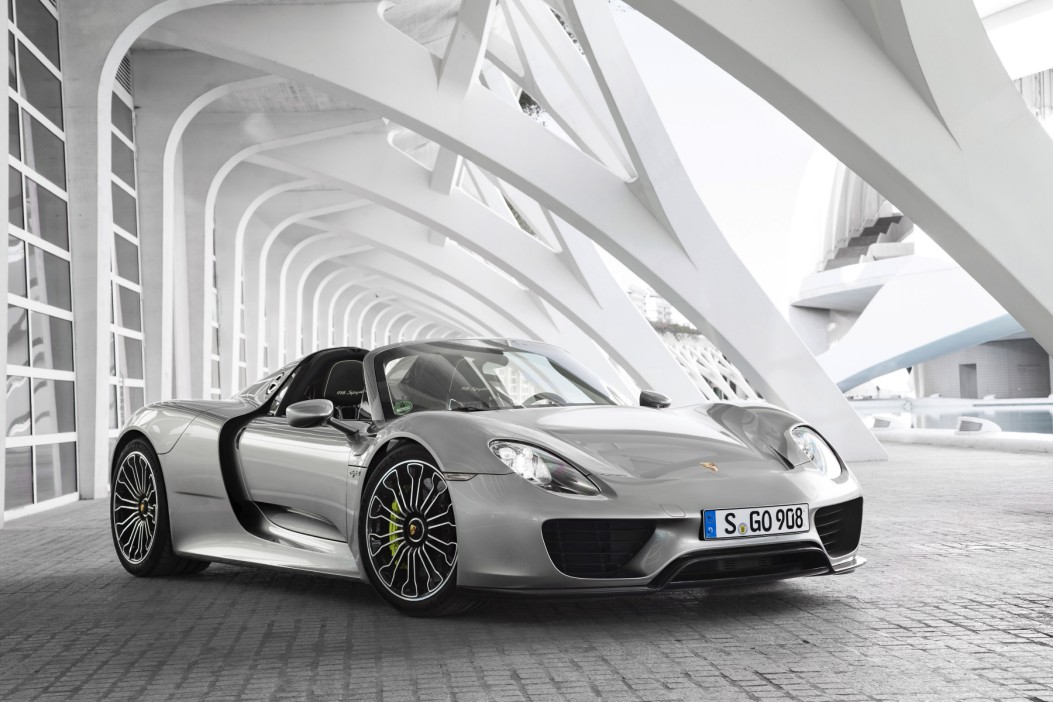 The Porsche, with its four-wheel drive and four-wheel steering, relies much more on mechanical grip. That’s tangible. You can feel it. And that gives you the confidence to push. So I did.

In the Chicago corner at the Top Gear track it is very easy to use the crown of the runway to push the car into a camera-friendly powerslide. I do it all the time, in every car I drive round there. But in the Porsche, when I turned in and lifted off the throttle, there was grip. And when I gave it the beans at precisely the right moment, there was more grip. It just went round at a speed that boggled my mind and hurt my neck.

One day we will put these two great cars side by side and get the Stig to see which is faster. We may even get the beautiful LaFerrari as well, even though that’s not a true hybrid.

For now all I can tell you is this. The Porsche is one of the three fastest cars in the world. It has sat nav and air-con and carpets. And driven carefully it can do 94 miles to the gallon.

The fastest milk cart in the West.

Search for and buy used Porsche on driving.co.uk