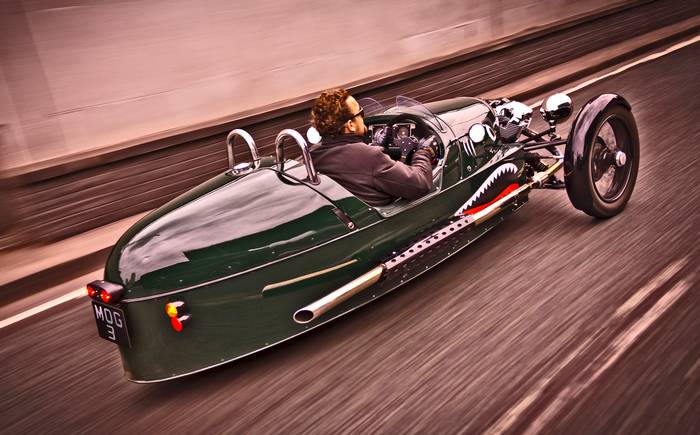 Almost no one wakes up in the morning and thinks: “I know. Today, I shall start a car company.” And those who do make this curious lifestyle choice never decide to make a small hatchback, or a solar-powered trike that could be used in the emerging world. No. They always, always, always think: “I shall make a supercar.”

Usually, this is foolish. Oh, you may have a mate who is a dab hand with glass fibre and you may have a considerate bank manager who did a bit of racing in his day and likes the idea of your quad-turbo, multi-supercharged 300mph road rocket. But what you are actually starting is a corner shop. And I’m sorry but Ferrari and Lamborghini are the supermarkets. And, as a result, their carrots are going to be more orange and cheaper than yours. Which means that pretty soon you will get a letter from your previously supportive bank manager that begins thus: “I am disappointed to note …”

Search for and buy a Morgan Three Wheeler on driving.co.uk

I look at the efforts from Noble and Koenigsegg and Zenvo and Spyker and Saleen and I’m afraid I can’t help thinking that these cars, while interesting and commendable, are ultimately a shoreline on which some poor blighter’s hopes will one day be dashed. You go to the Geneva motor show and every year there’s some poor chap in a bad suit, sitting in the unlit lowlands of the hall, desperately hoping that someone will notice the terrible car into which he’s ploughed his life savings. And you always think: “Why?”

The Ferrari 458 is a stunning, bewildering, brilliant, intoxicating blend of power, finesse, poise, technology, styling, rage, speed and g. It was created by some of the most extraordinary minds in the automotive world in one of the most advanced factories. And forgive me but you aren’t going to be able to make something better in a shed at the bottom of your garden.

Which brings us neatly on to Morgan. Unlike any other small car company, it does not try to beat the big boys. It simply makes stuff that you can’t get anywhere else. Sound business, if you ask me. What Morgan makes is a range of cars for people who still believe it’s 1938. People who use the word “bally”. Enthusiasts of the side parting. Fans of sheepdog trials who like to get under the “old girl” at weekends to do a bit of burnishing. Not me, in other words.

In recent years there have been attempts to bring the company to a point where the second world war has actually begun, with cars such as its Aero. But this is dangerous because when you lose that traditional Morgan “look”, you’re going to alienate your customer base. “Pah. The old girl looks like a bally Nissan,” is what they’d say. Plainly, the people at Morgan thought the same thing, which is why they’ve now decided to go back to their roots, to a time when someone had invented the wheel … but not four of them.

Morgan began in life making three-wheelers and the company is at it again with what is surely the most preposterous car on the market today. Imaginatively called the Three Wheeler, it started out as an American engineer’s homage to Morgan’s Neolithic approach to car design and manufacture. He built a bike-engined three-wheeler and the powers that be at Ye Olde Workshoppe in Malvern thought: “Golly. That bally Yank may be on to something here.” They went over there and bought him out for a reputed sum of 20 guineas. And some beads.

First, Morgan’s engineers ditched his Harley-Davidson engine and replaced it with something called the X-Wedge. It’s a 2-litre air-cooled V2 with a solid forged crank and three belt-driven camshafts. But the layout is nothing compared with where it is. In short, it’s not in the car. It’s slung out in front, where it sits like a big, complicated bumper. There is, so far as I can see, absolutely no reason for this. Enthusiasts say that because the engine is air-cooled it’s better that it sits exposed, but I don’t buy this. The engine in a Volkswagen Beetle is air-cooled and that sat inside the car, not overheating, just fine. I suspect it’s not in the car so that people can look at it and get all adenoidal and nostalgic about how life was better in black and white.

Of course, putting a two-cylinder engine in front of the car is nothing compared with what they’ve done at the back, which is to fit just one wheel. I should imagine that when Morgan enthusiasts see this, many will quickly develop a noticeable bulge in their Rohans. Whereas I stood there thinking: “Have these people never seen a three-legged dog? It doesn’t work. And neither will that.” Amazingly, though, it does.

I know better than most that a Reliant Robin falls over whenever it is presented with any sort of curve and any sort of forward momentum. That’s because Reliant chose to fit a single wheel at the front. Morgan, however, has turned everything around and fitted a single wheel at the back. The stability is remarkable. It takes a while to get the confidence to push, but push you can until, eventually, you discover that it will get round Donington’s Old Hairpin at 80mph. Almost exactly three-quarters of the speed that would be possible if it were an actual car.

Other things worthy of note? Well, the vibrations are bad, and if you are more than, say, 3ft tall, you may have to take a leaf out of the car’s book and leave a limb at home. Also, at £30,000, it is expensive. However, I’m afraid to admit I rather liked it. I like the way Morgan painted it to look like a second world war fighter plane — something most Morgan owners think has only just been invented — but most of all I like the way that it feels so completely and absolutely different from anything else that is allowed on the road.

One of the big differences is that it’s very difficult to reach the brake pedal. Another is that your head’s in the slipstream and your right arm is like the engine, sitting outside the bodywork. Even the engine feels weird. Because there are only two cylinders, the torque comes in staccato bursts. One second you have enough to fell a tree; the next you’re becalmed. Morgan even had to fit a cushioning device to the running gear so that the Mazda MX-5 gearbox could cope.

And yet, you can do a doughnut in it. And you can leave the lights in a cloud of smoke as that single rear tyre does its best and fails to put the power on the road. I bet if you really wanted, you could make it buzz the bally tower. After five minutes behind the wheel, I began to think I might be Kenneth More. Is it fast? No. Is it safe? Perhaps not. Is it practical? No. Is it comfortable? Yes … compared with being stabbed. But did I enjoy myself in it? Absobloodylutely.

Let me put it to you this way. You have a choice of going to Paris this afternoon on a once in a lifetime trip. Would you prefer to make the journey in a comfortable Airbus A320, or a draughty, noisy Spitfire? My case rests.

Search for and buy a Morgan Three Wheeler on driving.co.uk