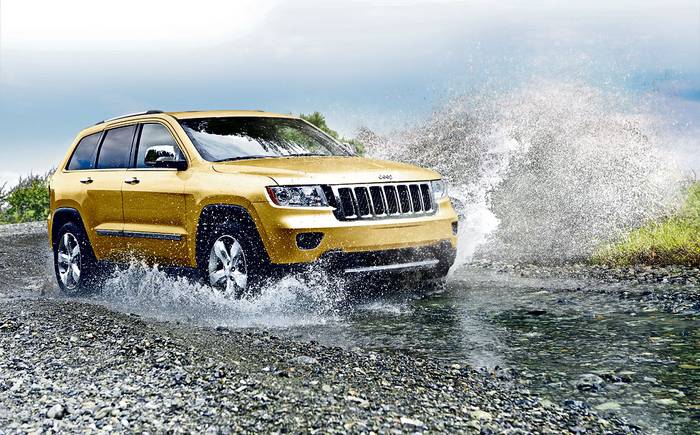 Last weekend AA Gill wrote about New York in such glowing terms that I wanted to drop what I was doing and go there immediately. He admitted, of course, that in summer the humidity makes the sky feel as thick as wallpaper paste and in winter it turns slate grey and comes right down to the ground, blotting out the city’s raison d’être. But he talked of an autumn day when there’s a crimson tide in Central Park and the sky appears to have been bleached, perhaps sucked of its richness by the vibrancy of the people below.

I would agree with Adrian that New York is one of the world’s greatest cities. Along with, in no particular order, San Francisco, Rome, Tokyo and Cape Town. But last weekend, after much quiet contemplation, I decided that none of them can hold a candle to what is unquestionably the best of them all: London.

Search for and buy a Jeep Grand Cherokee on driving.co.uk

I came to this conclusion because I was working at the ExCeL exhibition centre, which is located about 6,000 miles to the east of the City, near where they are holding the running and jumping competitions next year. Boris Johnson will tell you that the best way of getting there is by the Sustainable Light Railway. But he’s wrong. The best way of getting there is via the Thames, on a Fairline Targa 47 luxury yacht.

I should make it plain from the outset that it is extremely difficult to drive a boat through the middle of London. The civil engineer Joseph Bazalgette made sure of that, separating what at the time was an open sewer from the City with the Thames Embankment.

And today the authorities keep his spirit alive with an astonishingly well thought-out plan to make absolutely certain that no private individual can park their boat even for a moment, at any point, anywhere at all. You can come, but you must go away again straight away. Two years ago the Port of London Authority introduced a 12-knot speed limit on parts of the river and I’m not surprised, really, because out there in the chop, among the pleasure boats and the barges, which are operated by men who live by rules laid down in the 19th century, you feel completely at sea. Taking a pleasure boat into this alien world full of people who make a living there is like riding a tricycle along the Central line. It’s going to end up with a crash.

Despite all this, you must try it. It is No 1 in the things you have to do before you die. Wait for a crisp autumn day when there isn’t a cloud in the sky and go through the middle of London on a boat. And then you will realise why nowhere else gets close.

It’s the variety, really. New York is a monoculture. It does one thing. So is San Francisco. And so is Rome. London, though, is different. You have the Tower, which is almost a thousand years old, right next to the brand new glass-and-steel cathedrals to capitalism. You peep past converted 19th-century warehouses to catch a glimpse of a 17th-century cathedral. And then it’s eyes left for the Palace of Westminster and eyes right for the London Eye. Pretty soon your head is rotating like that little girl’s in The Exorcist and you’re wishing you had compound vision like a fly. One minute you are gliding past HMS Belfast, a second world war battle cruiser, and no sooner have you taken stock of its rear end than it’s time to swivel round and gawp at London’s signature dish — Tower Bridge.

It’s not a river cruise, really; it’s time travel. And I’m willing to bet that there’s no other city in the world where anyone would point excitedly at a power station. But that’s what you do in Battersea. However, it’s the return journey, at night, that leaves you breathless. Many cities tart themselves up for one-off events. London looks like it’s New Year’s Eve all the time. It is lit absolutely beautifully. From the laser marking the meridian at Greenwich, up past Canary Wharf and under the blue-white lighting at Tower Bridge, you arrive once more at Westminster, where the clock tower is a warm blend of vivid green and sodium orange, and, opposite, the London Eye appears to be a portal into space. There was even a gorgeous new moon to top the scene off.

Then there’s the Albert Bridge. It’s lit so vividly, and the reflection is so strong, you feel as if you’re steaming along in a vast river of custard. And to the left and right are the new blocks of executive flats, each with its floor-to-ceiling windows. No point closing the curtains. Who’s looking? We were. And that was great, too.

There is no one-hour trip in the world in which you see so much, and so much of what you see is so wildly different. Every day I’d spot something else. Another frilly Victorian detail. Another elegant way of converting the warehouses that served the industry that built them into flats for the industry that fuels Britain today. A hundred years ago they were full of cotton and tobacco. Today they house bankers who’ve come over from New York for six months and can be seen on their balconies, gawping and not quite believing their eyes. Fifth Avenue is a modern-day wonder. But the canyon carved by Old Father Thames — that’s on a different plane altogether.

Sadly, because the boat was so sublime and the view so moving, I used it every day to commute to the ExCeL. Which meant the new version of the Jeep Grand Cherokee I am supposed to be writing about this morning spent most of its time sitting in a lock-up garage.

It had a difficult birth, this car. Conceived when its parent firm Chrysler was married to Daimler, which owns Mercedes-Benz, it shares many of its underpinnings with the Mercedes ML. But before it was born, its parents divorced and its mum ran off with a man from Fiat. As a result of her new liaison it has a 3-litre Italian diesel engine. No other option is available. The figures look quite good, and off road there is enough engineering — both electrical and mechanical — to ensure progress will be maintained long after most of today’s high-riding urban-crossover sports-utility offerings have sunk without trace into the mud.

But one brief drive was enough to confirm that while the Jeep may be fine in the big outdoors, it’s a very old-fashioned Hector everywhere else. The automatic gearbox operates on geological time and the engine is about as refined as a scaffolding company’s tearoom. And while the interior is festooned with all manner of luxury items and electrically operated toys, there is a very real sense — as is the way with all American cars — that a million pounds has been spent at Woolworths.

The exterior is different. It looks quite good, and, unlike Land Rover, Jeep offers a tasteful range of colours. Mostly, though, this car is big and it’s cheap and it’s simple. Which, of course, makes it absolutely ideal for someone who for some reason doesn’t want a Toyota Land Cruiser.

Search for and buy a Jeep Grand Cherokee on driving.co.uk